CCTV captures thug about to stab his love rival

Gary Fry, 39, has been jailed for four years for stabbing a love rival he wrongly suspected of cheating with his girlfriend

This chilling CCTV image captures the moment a handyman prepares to stab a love rival after finding out his girlfriend had pestered him for sex.

The footage shows Fry, a former drug addict with 99 previous crimes to his name, standing with his hands in his pockets before removing a blade and launching a savage attack.

Fry, from Torquay, Devon, was furious about text messages linking his girlfriend with Mr Morrison.

He was jailed for four years at Exeter Crown Court for the attack, which Mr Morrison narrowly survived.

Devon and Cornwall Police have shared an image taken just a few moments after Fry takes his hands from his pockets and prepares to turn to attack Mr Morrison.

He admitted causing grievous bodily harm with intent, and the court heard the defendant ‘snapped’ on January 29. 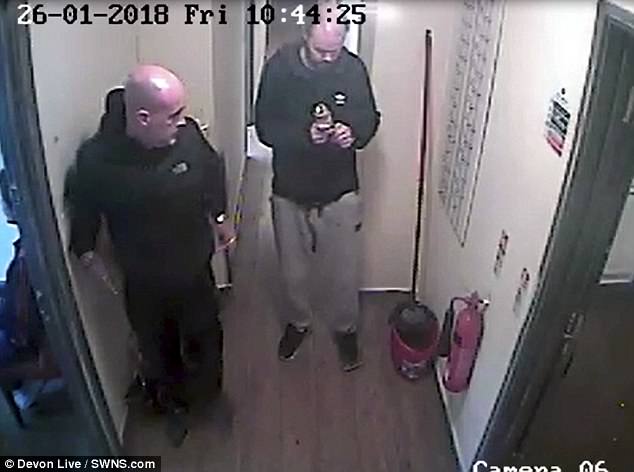 Fry was getting help for his drug addiction and had done so well that he was kept on there as a handyman.

Mr Morrison said no and later assured Fry that nothing had happened.

There appeared to be no falling out between the men prior to the stabbing.

CCTV showed Fry standing in the communal area of the lodge while Mr Morrison drank a cup of tea close by and filled up a cigarette lighter.

The wounds were stitched at hospital and he was released that day. 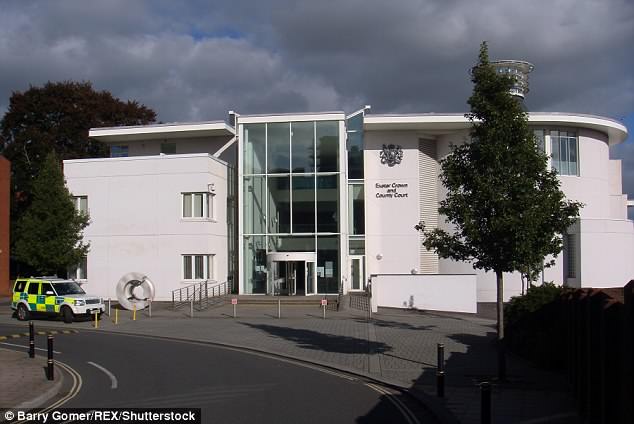 Mr Morrison is seen retreating to another room before falling onto the floor. Fry fled out of sight of the camera.

The victim told police he could not understand why Fry had attacked him.

Mr Ali Rafati, defending, said Fry was deeply sorry and he had had the knife with him for work.

He said he ‘very sadly lost his temper for a few seconds’ after being shown texts that something had happened between the victim and his girlfriend.

Judge David Evans said the offence happened, ‘Following the receipt of some information connecting your girlfriend to Mr Morrison in some way.

‘It shouldn’t have given rise to anything other than a friendly chat.

‘It seems you had let things get to you and I’ve watched the CCTV footage of what happened.

‘It shows you standing by the entrance to the communal room in the hallway of the lodge and Mr Morrison comes by a couple of times to interact.

‘You have your hands in your pockets and in one of those pockets must have been a knife.

‘It seems as Mr Morrison stood in the hallway filling a cigarette lighter and posing no threat whatsoever his continued presence got on your nerves a little.

‘Clearly things were festering in your brain and there came a moment when you snapped.

‘You were an ace away from killing Mr Morrison.

‘The knife may have fatally injured him – if it had been perhaps a centimetre or two one side of the other.’