CDC director pledges to bring opioid epidemic ‘to its knees’ – but what is he ACTUALLY going to do?

The new director of the top public health agency in the US has pledged to bring the opioid epidemic ‘to its knees’.

Dr Robert Redfield Jr took over the top seat at the Centers for Disease Control and Prevention this week with a promise to renew efforts to fight the epidemic that claims the lives of more than 115 Americans each day.

Health experts are excited by Dr Redfield Jr’s strong clinical background and his experience at the forefront of research on the AIDS epidemic, but his initial suggestions for fighting the opioid crisis will require a lot more money than is currently available.

In a staff meeting Thursday he mentioned a need for enhancements in the CDC’s tracking of the epidemic in the US as well as an improvement in the quality and availability of treatment programs.

Both of these topics have received a significant amount of attention in recent years but have faced the same big hurdle: limited funding.

The federal budget signed in February includes a $3 million increase in funding to address the opioid epidemic in 2018 but the details for how exactly that money will be allocated has been limited.

Congress previously attempted to address delays in overdose data reporting in 2016 by providing the CDC with funding for an enhanced monitoring system, but that money was only enough to cover 16 states. 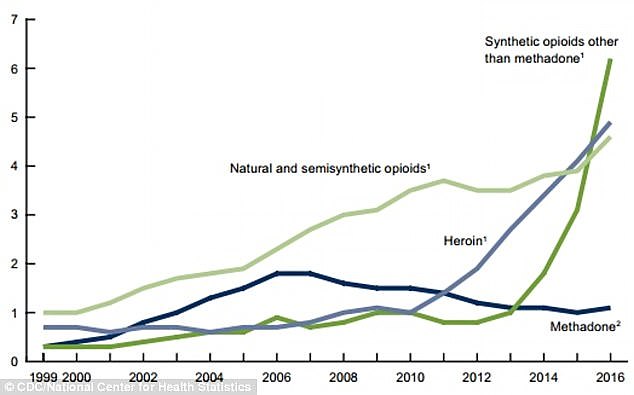 Under the Trump Administration the federal government has been criticized for an ‘all talk but no action’ approach to the growing crisis that’s hit all segments of the US population.

President Trump formally declared the opioid crisis a ‘public health emergency’ in October but stopped short of allocating more resources to address it.

Both of Dr Redfield Jr’s early pitches for getting the crisis under control would require significant increases in funding.

Addiction treatment programs are largely run on the state level but rely heavily on federal funding.

Breaking opioid dependency in addicts is crucial to stopping the epidemic and the resulting deaths, Dr Kolodny, co-director of opioid policy research for the Heller School for Social Policy and Management at Brandeis University, told MONEY.

These treatment programs involve a combination of medication to help ween addicts off of prescription and illicit drugs plus behavioral therapy to address the addiction psychologically.

Dr Kolodny estimates that implementing an adequate number of treatment programs across the US will cost $6 million per year over a 10-year period, racking up a bill of $60 million for the federal government.

In regards to improving the tracking system, the one that has been in place since 2016, the Enhanced State Opioid Overdose Surveillance Program, has been very successful at providing a more detailed view of the epidemic.

However, funding would have to increase three-fold to allow for all 50 states to be enrolled in that program.

A steady increase in cases of opioid addiction and overdose was first noted in the early 2000s after an increase in prescriptions by doctors through the 90s.

The CDC and FDA released guidelines for curbing addiction in 2013 – which is widely regarded as the year that the current crisis took hold.

By 2015 opioid overdoses had become the leading cause of death among adults under 50 as the death rate reached 52,000, almost double what it was a decade earlier.

In 2016 opioid overdose deaths jumped to 64,000, causing US life expectancy to drop for the second year in a row for the first time since the 1960s.

Initial figures for 2017 suggest that the situation has only gotten worse.

Under the Trump Administration the federal government’s approach to addressing the crisis has been weak across the board, experts say.

Chuck Ingoglia, a senior vice president at the National Council for Behavioral Health, said the Trump Administration’s strategy thus far has been ‘a lot of talk, little action’.

‘It’s great that the president says this is a priority. It’s great that he convened a task force so we have another paper that says the opioid crisis in America needs attention. But too little has happened to actually do anything about it,’ Ingoglia told Vox.

A commission established by Trump last year published a report with more than 50 recommendations for how to fight the epidemic in December, but as of March only a handful of those recommendations have been implemented.

In January a member of the commission, former Democratic senator Patrick Kennedy, called the body a ‘sham’ and a ‘charade’ in an interview with CNN.

A report by the Department of Health and Human Services released early this year revealed that it had given out $800 million to fight the epidemic in communities across the country.

The report listed the department’s efforts to stop the epidemic as one of its key successes under the Trump Administration.

In April 2017 the HHS introduced a five-point strategy for fighting the epidemic:

In September the CDC, which sits under the HHS umbrella, launched a campaign called Rx Awareness featuring real-life accounts from people recovering from opioid addiction.

The campaign is intended to increase awareness of the epidemic but public health experts were found to be unimpressed with the first round of advertisements.

Efforts to combat the rising rates of opioid overdose deaths have been found to be more effective on the local level in many cases.

City police and fire departments across the country have taken the initiative to start carrying naloxone, an anti-overdose drug.

One of the most promising local success stories comes from Ocean County, New Jersey, where treatment programs were implemented in five police departments in 2016.

As a result drug overdose deaths were about 25 percent lower that year than the year before.

The small town of Chillicothe, Ohio, has also implemented local programs to slow the rising addiction rates by focusing on preventing a new generation of addicts from forming.

In response to budget cuts, local leaders in the town created a reward program for children who submitted to regular drug tests in schools and a college scholarship prize awarded to a graduating high school senior who has stayed clean.

In a joint report published in November the National League of Cities and the National Association of Counties offered examples of other towns that have implemented similar programs in hopes that more local leaders will take action in their communities.

IS THE OPIOID CRISIS THIS GENERATION’S AIDS EPIDEMIC?

The last time the US saw an epidemic on this scale was with AIDs in the 1980s and 90s.

Dr Robert Redfield Jr, a virologist and physician, was one of the top researchers on AIDs when the epidemic was emerging.

He made several references to similarities between the AIDS epidemic and today’s opioid crisis both in scale and with the surrounding stigma.

He said that the AIDS epidemic is expected to be brought to an end in the next three to seven years, which was possibly meant to convey hope for an end to the opioid crisis as well.

However, there are several key differences between the AIDS and opioid epidemics.

The AIDS epidemic primarily affected a small subset of the population, gay men, whereas the opioid epidemic has been devastating across demographics from blue collar workers in suburban areas to affluent college students. 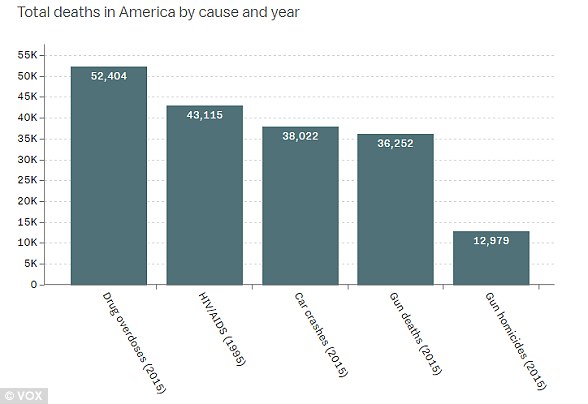 The opioid epidemic has also been more deadly thus far.

Treating opioid addiction and preventing overdose is also much less straight-forward because unlike AIDS, opioid use is not a virus that can be vaccinated for, and handing out items such as clean needles and condoms can’t stop it.

Instead, researchers are treating the opioid use as a ‘social contagion’ that spreads through family and friends who have been prescribed opioids.