CDC to give MORE school reopening guidance after Trump tantrum

The Centers for Disease Control will produce additional guidance on school reopenings after President Donald Trump demanded kids get back to the classroom, making it part of his pitch to voters as he seeks a second term.

CDC Director Dr. Robert Redfield said his agency wouldn’t revise what was already public but would provide ‘additional reference documents’ on the subject. He didn’t address what those additional documents would say or if it would change the extensive guidelines already released from his agency.

‘Our guidelines are our guidelines but we are going to provide additional reference documents to aid basically communities that are trying to re-open K through 12s,’ he said on ABC’s ‘Good Morning America.’

‘It’s not a revision of the guidelines, it’s just to provide additional information to help the schools be able to use the guidance that we put forward,’ he added.

The conflicting statements and information have left parents unclear about what will happen as fall approaches. Some school districts have taken matters into their own hands, sending out surveys to ask parents their comfort levels.

But uncertainty remains as coronavirus cases spike and some states are walking back the reopening process – ordering restaurants, bars and gyms to close again.

The CDC will produce additional guidance on school reopenings after President Donald Trump demanded kids get back to the classroom – CDC Director Dr. Robert Redfield said his agency would provide ‘additional reference documents’ but didn’t get into specifics 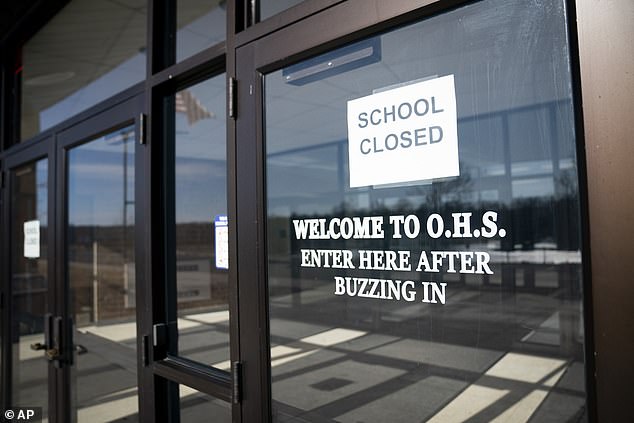 CDC Director Dr. Robert Redfield said it was in the ‘public health interest’ to ‘get the schools re-open’

Two questions Redfield did not answer from anchor George Stephanopoulos was whether the additional guidance was coming at the request of the president and whether there was concern a reopening of schools could lead to a spike in coronavirus cases. The COVID-19 virus has infected more than 3 million Americans.

Instead Redfield said it was in the ‘public health interest’ to ‘get the schools re-open.’

‘The one thing I really want to say that would personally sadden me and I know my agency is in individuals were to use these that we put out as a rationale to keep schools closed. As I said the public health interest of the students today is to get the schools re-open,’ he said.

Redfield’s words come after President Trump threatened to cut federal funding for school districts that refused to heed his demand to reopen.

But questions immediately arose about whether Trump has the power to do that.

Education Secretary Betsy DeVos went on Fox News Thursday morning to clarify the matter.  She said the administration would not cut federal funding but that the money would be used else where.

‘If schools aren’t going to reopen, we’re not suggesting pulling funding from education but instead allowing families … (to) take that money and figure out where their kids can get educated if their schools are going to refuse to open,’ DeVos said. 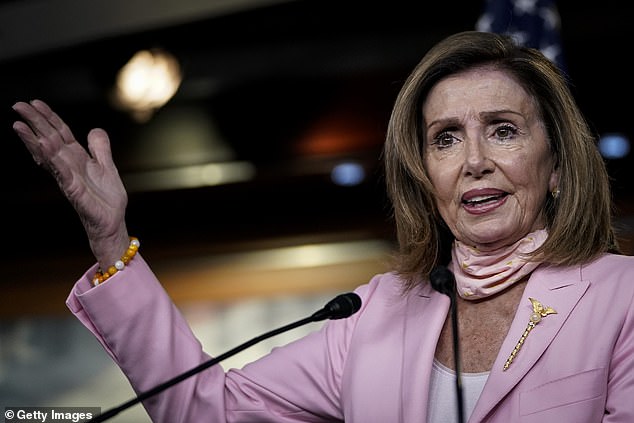 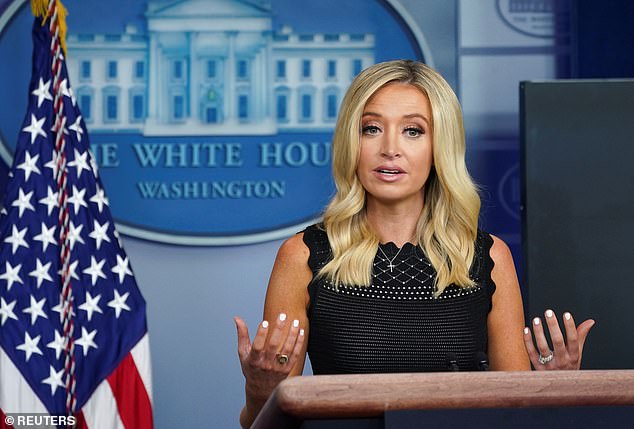 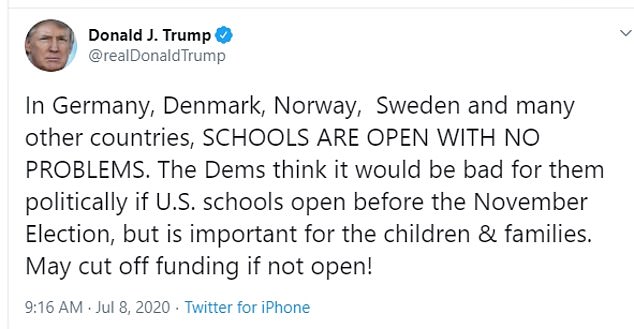 Democrats have blasted Trump for pushing schools to reopen this fall when there is no vaccine yet and cases are on the rise.

‘We don’t want our children to take risks to go to school. We’re supposed to mitigate for any damage, we’re supposed to keep them safe,’ Speaker Nancy Pelosi said Thursday at her press conference on Capitol Hill.

‘We have to have common sense weigh in on this – common sense to listen to the scientist and not CDC regulations that are predicated on a tweet,’ she said. ‘We always want any guidance that we get to be updated by the scientific knowledge and the rest. But this to be downgraded on a tweet, just tells you how senseless all of this is.’

Polls show parents are wary to send their kids back to the classroom and teachers themselves are reluctant to return.

Nationwide, 1 in 5 teachers said they were unlikely to return to school if their buildings opened this fall, according to a USA TODAY/Ipsos poll in late May.

And a separate poll of parents with at least one child in grades K-12 finds that 60 per cent said they would be likely to pursue at-home learning options instead of sending kids back to the classroom. Nearly a third of parents, 30%, say they are “very likely” to do that.

Meanwhile, New York City Mayor Bill de Blasio, whose city has the nation’s largest school district, announced schools there would not fully reopen this fall but limit in-person classes to one to three days a week.

The plan would keep the number of people in a classroom – including teachers – to about a dozen at a time to enable social distancing and other protective procedures. Typical classroom size is around 30 students.

Even as coronavirus cases spiked across much of the United States, Trump issued his demand to reopen the nation’s schools, showing little concern about the health implications of a move that could play to his political base.

Trump claimed Wednesday morning that Democrats are pushing to keep schools closed because they are concerned that reopening would be a bad political move for presumptive nominee Joe Biden ahead of the November presidential election.

He added that countries that have begun reopening their schools are having ‘no problems’ – failing to mention that their rates of cases and mortality from coronavirus are much lower than in the U.S.

‘In Germany, Denmark, Norway, Sweden and many other countries, SCHOOLS ARE OPEN WITH NO PROBLEMS,’ Trump tweeted.

‘The Dems think it would be bad for them politically if U.S. schools open before the November Election, but is important for the children & families,’ he wrote, adding: ‘May cut off funding if not open!’

Only about 10 per cent of all education spending come from federal funding.

‘What is best for the child is for these schools to be open. That is pretty clear,’ White House press secretary Kayleigh McEnany said during her press briefing.

She also claimed that some children are becoming even more disadvantaged by being kept away from school as disadvantaged students no longer receive free breakfast and lunch and less abuse cases are being reported.

It’s very unlikely Trump would have a decision over how school’s federal funding. Advocacy director for The School Superintendents Association noted: ‘There is no mechanism by which they can decide to magically withhold funding without Congressional authorization’ 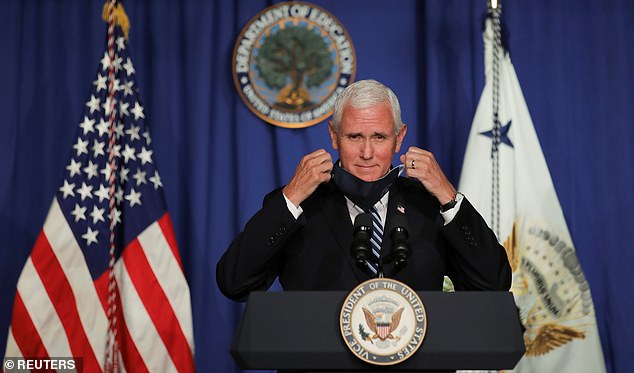 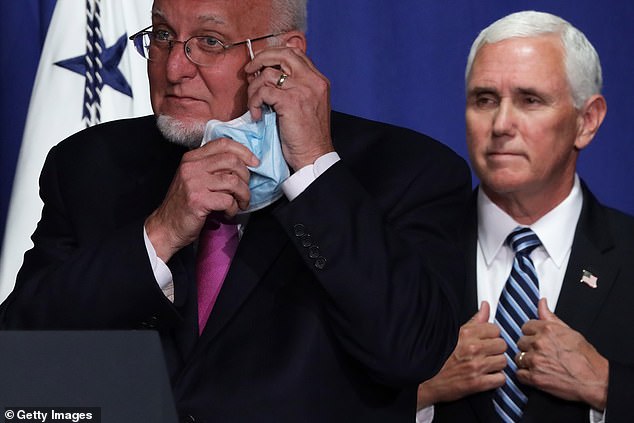 CDC Director Robert Redfield (pictured, left) reiterated the vice president’s comments and appealed to the president’s displeasure with the old guidelines, claiming the new guidance would help communities and families prepare for students to return to the classroom

During a press briefing on Wednesday at the Department of Education, Vice President Mike Pence said the CDC would issue new guidance on reopening schools next week.

Both he and Redfield said the agency’s recommendations should not be viewed as a barrier to returning children to classrooms.

That announcement came after President Trump raged against the original plans for being too ‘expensive’ and ‘impractical.’

‘While they want them open, they are asking schools to do very impractical things,’ he continued. ‘I will be meeting with them!!!’

The current CDC guidance has several elaborate suggestions on how to keep children safe: desks to be six feet apart where feasible, for children to face in the same direction on one side of tables and the use of cloth face masks.

The CDC also suggested the closing of communal areas like dining rooms and playgrounds and the installation of physical barriers like sneeze guards.

Children with medical conditions that put them at higher risk could still use online learning.

‘We have no evidence that there is significant mortality in children without coexisting diseases,’ Dr. Deborah Birx, the coordinator for the White House Coronavirus Task Force said at Wednesday’s briefing.

‘It’s absolutely essential that we get our kids back in the classroom for in-person learning,’ Vice President Mike Pence said during remarks at the Education Department on Wednesday afternoon.

When asked by a reporter about why Trump threatened to cut funding, Pence said: ‘The president is just really serious.’

‘What you heard from the president is just a determination to provide the kind of leadership from the federal level that says we’re going to get our kids back to school, because that’s where we belong,’ Pence said.

Federal funding for primary school mostly goes toward low-income schools and special education programs, causing education leaders to immediately question how Trump’s administration would be able to hold back funds for the majority of U.S. schools.

‘To be clear: there is no mechanism by which they can decide to magically withhold funding without Congressional authorization,’ Sasha Pudelski, advocacy director for AASA, The School Superintendents Association, tweeted Wednesday morning.

Trump’s comments regarding schools’ funding come the day after he hosted White House talks on getting U.S. students back to class as schools, elementary through college, have gone mostly remote since March.

‘We want to reopen the schools. Everybody wants it. The moms want it, the dads want it, the kids want it. It’s time to do it,’ Trump said. ‘We’re very much going to put pressure on governors and everybody else to open the schools,’ the president said during the event focused on reopening U.S. schools.

Trump, as president, has little power to force schools to open, since that is a decision made at the state and local level. 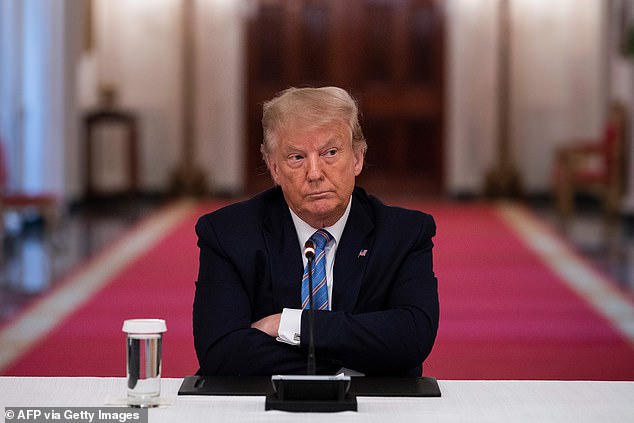 First lady Melania Trump joined the president at the event Tuesday, claiming: ‘Children’s mental health and social development must be as much of a priority as physical health.’

‘The same is true for parents,’ she continued. ‘Many will be forced to make stressful choices between caring for their children and going back to work.’

The Trumps ignored questions after the event if they would send their 14-year-old son Barron back to school.

During the event, Trump also lashed out at Harvard University, claiming they should be ‘ashamed’ for what he claims is a premature decision to remain remote for the whole year.

‘I see Harvard announced that they’re closing for the season, for the year,’ Trump said during his closing remarks at Tuesday’s event. ‘I think it’s ridiculous. I think it’s an easy way out. And I think they ought to be ashamed of themselves.’

Several universities are facing lawsuits from students claiming they should not be required to pay the same level of tuition and fees as classes transitioned to fully online.

Specifically, the legal action argues that students should not have to pay for facilities and other maintenance fees – like those sums usually paid for use of the library and other technologies and facilities located on campus.

Even though other countries have moved toward reopening schools and going back to in-person classes, American schools and universities are much more cautious as the U.S. remains by far the most affected country by coronavirus with more than 130,000 deaths.

Countries that have already started reopening their schools have set an example for ways the U.S. can consider when students and teachers return to the classroom.

Some have started with part-time class schedules, with some only hosting classes one day a week, others require masks to be worn at all times or are maintaining social distance by separate desks that are six feet from one another.

Some models have floated the idea of a schedule where while the school is open every day, students only attend half the week so only half of the school’s population is attending in-person classes from day to day.

And several school districts are sending out surveys to parents to see what they feel comfortable doing.