Flu shot rates are lower than hoped this year, new CDC figures reveal as America hurtles towards one of the worst flu seasons in years.

A report published today shows the rate of adults getting vaccinated against influenza this year has dropped 3.7 percent, meaning just a third of adults and children are protected.

And just a third of pregnant women have received the shot.

It may not sound like a disaster, since this year’s flu shot is only 10 percent effective against the difficult-to-stop H3N2 strain.

However, doctors insist we cannot underestimate the importance of ‘herd immunity’, and that the shot may be more effective as lessening illness in those who do get sick.

This graph shows an increase in the number and percentage of people testing positive for influenza this year, from October to the end of November

‘Continued efforts are needed to increase the percentage of the population vaccinated during the next few months in order to reduce the burden of flu,’ the authors of the CDC report said.

In particular, they said we need to focus on racial disparities.

The biggest drop in flu shot rates was seen among Hispanic adults (down 7.7 percent from last year).

Although H3N2 is not as virulent as some other strains of flu, it mutates very easily, making it stronger against the body’s immune system. 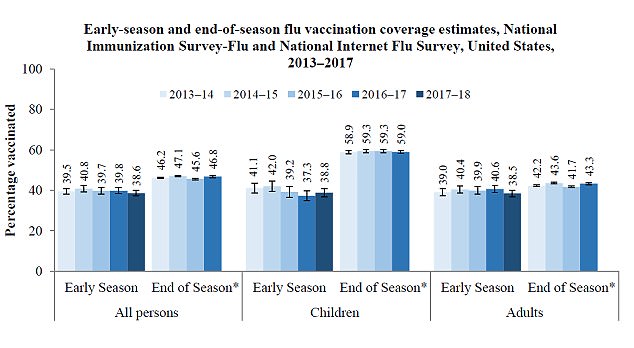 While early season flu shot coverage is similar to previous years, it has dipped this year, as we can see from this data published today by the CDC

In 2014, 147 children died of flu – most of them from a particular strain, H3N2. By the end of the year, the CDC declared an epidemic, with more than 20 deaths in just a few weeks before Christmas that year. As health officials rushed to contain the outbreak, the CDC admitted that the 2014 flu vaccine did not protect well against H3N2 – it had just seven percent chance of protection.

The flu season is declared under-way once we have reached an above-average number of people with influenza symptoms (i.e. more than 2.2 percent of people). We surpassed that by Thanksgiving.

Experts warn this could be an early sign that the US faces the same fate as Australia, which had one of its worst outbreaks on record, with two and a half times the normal number of cases.

Some of the country’s hospitals had to resort to ‘standing room only’ after being hit by more than 100,000 cases of the H3N2 strain.