‘I went to Harvard to be an Instagrammer’: Celebrities have a field day mocking fellow stars Felicity Huffman and Lori Loughlin after they were charged for cheating their children’s way into college

Celebrities are having a field day mocking fellow stars Felicity Huffman and Lori Loughlin after they were charged in the college admissions bribery scandal.

Loughlin and Huffman headline the list of 50 people charged on Tuesday in the scheme to help wealthy Americans cheat their children’s way into universities.

As the actresses and their families were dealing with the fallout from scamming to get their children into college, their fellow stars were busy roasting them on Twitter.

Many used scenes from Loughlin’s TV show Full House and her character Aunt Becky to poke fun of her. 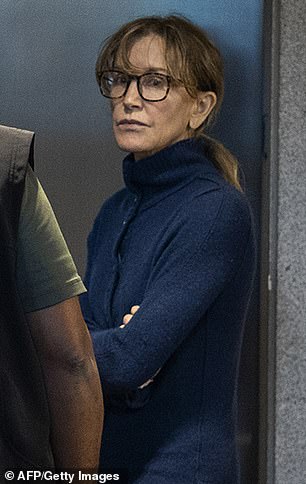 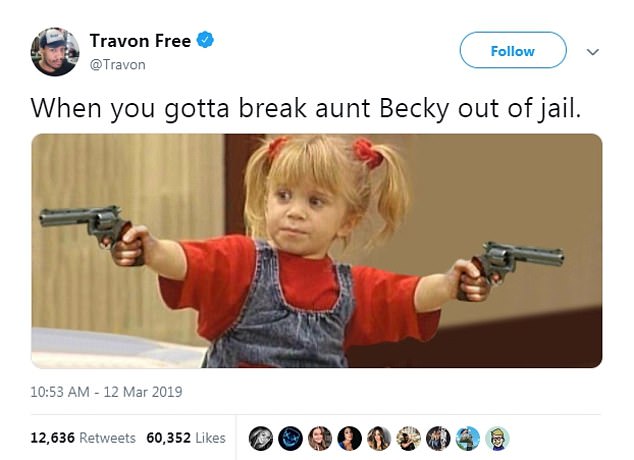 Many used scenes from Loughlin’s TV show Full House and her character Aunt Becky to poke fun of her following the charges, including comedian Travon Free 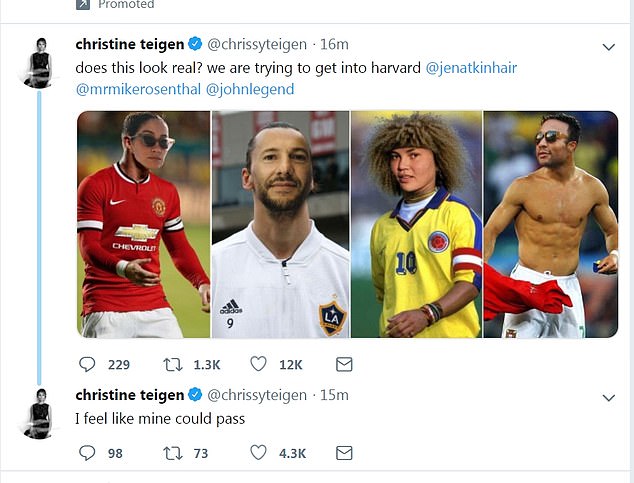 Chrissy Teigen joked on twitter about her, husband John Legend and their friends Mike Rosenthal and Jen Atkin getting into Harvard as athletes

‘When you gotta break aunt Becky out of jail,’ comedian Travon Free tweeted alongside a photo of Michelle from Full House.

Meanwhile Olivia Munn mocked Loughlin and her YouTube and Instagram influencer daughter who she allegedly paid to get into USC.

‘The irony will be that these parents spent all this money to hustle into top universities and are now in the middle of this sh*t show just to find out in a few years that their kids only have dreams of being an influencer,’ she tweeted.

She added: ‘I went to Harvard to be an Instagrammer. #ad #abs #fittea #waisttrainer #fitnessgoals #matchamornings #keto #lchf #superfoodmuffins.’

Patton Oswalt posted a series of tweets on the issue, including that he paid thousands for his daughter to get into a New York painting studio.

‘Just paid 425k to get my daughter into a Color Me Mine,’ he tweeted. 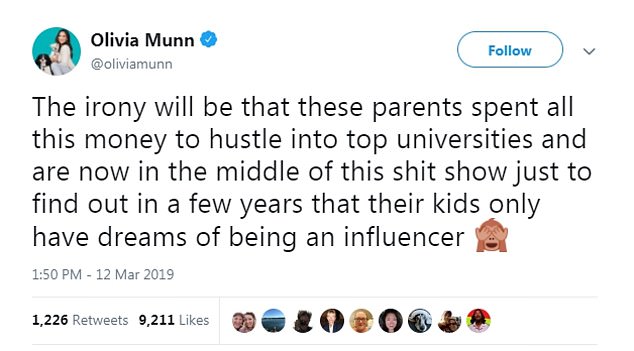 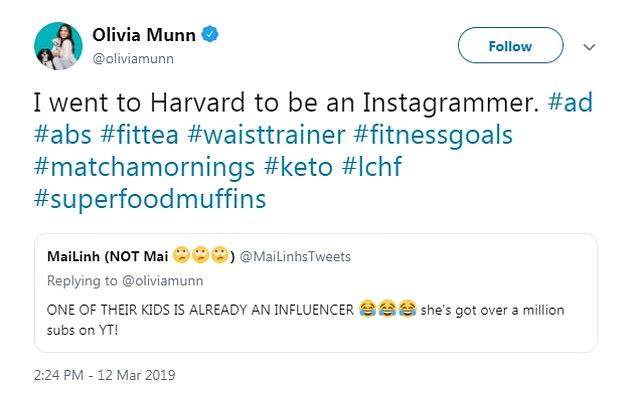 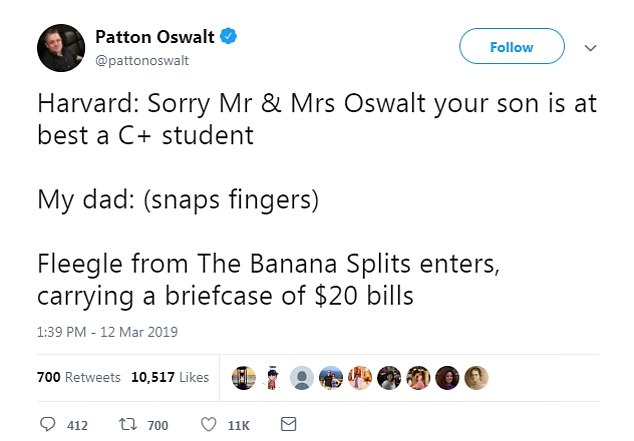 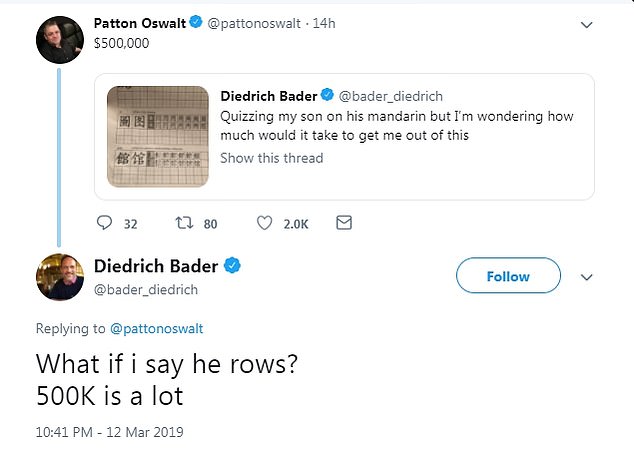 Meanwhile others applauded the FBI for the name of the investigation – Operation Varsity Blues.

Varsity Blues, a 1999 film about a Texas high school football team, has a scene where a player tells his father he wants to be in charge of his future.

Actor James Van Der Beek, who starred in the film, tweeted: ‘If only there was a succinct turn of phrase these kids could have used to inform their parents they were not desirous of their life path…’

Comedian W. Kamau Bell tweeted: ‘Operation Varsity Blues: I guess they’re are like, ‘Hey, even though we’re the FBI, we still know how to have a good time.’

Loughlin was taken into custody by FBI agents in Los Angeles on Wednesday morning, while Huffman was released on a $250,000 bond Tuesday night. 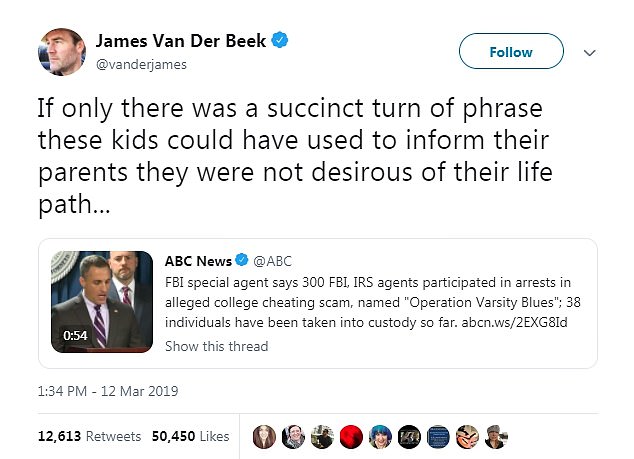 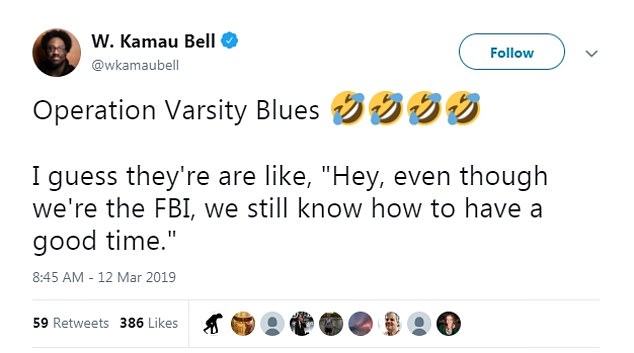 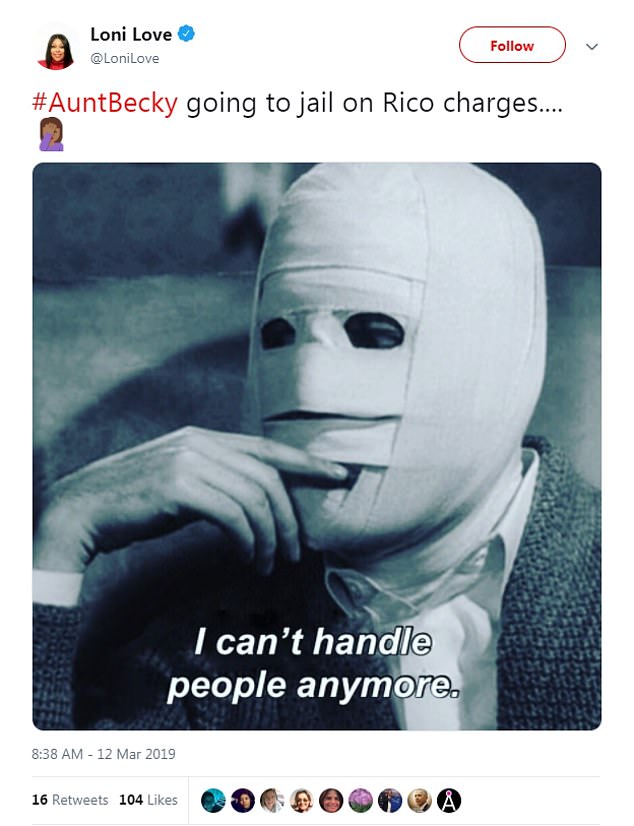 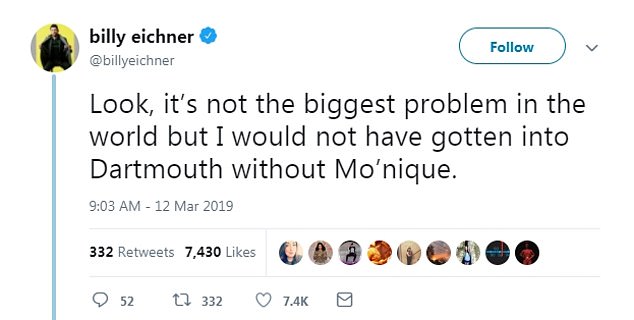 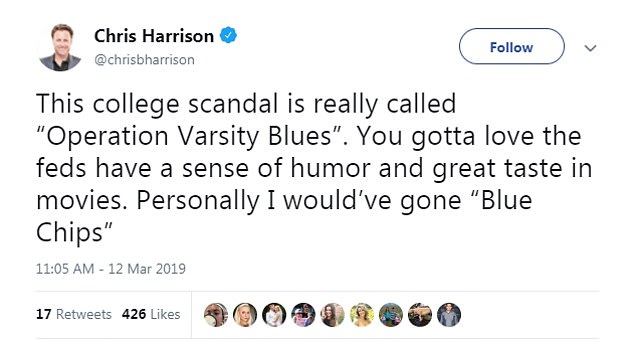 Fifty 50 parents and coaches were charged on Tuesday in a plot to get their children into schools including Georgetown, Stanford, UCLA, University of San Diego, USC, University of Texas, Wake Forest and Yale.

The scheme involved parents paying bribes of between $100,000 to $2.5 million to get their children into elite schools.

In many instances, authorities said the children were unaware that their parents had paid these bribes.

Federal prosecutors in Boston charged William ‘Rick’ Singer, 58, with running the racketeering scheme through his Edge College & Career Network. His network served a roster of clients including actresses and chief executives.