Top Sydney chef and restaurateur behind Luke’s Kitchen and Glass Brasserie Luke Mangan has shared his typical daily diet, as well as his favourite weeknight meal and how he uses up leftovers.

The 50-year-old celebrity foodie said he religiously starts his day with a 6am strong coffee and a few laps of Bondi Beach, before breakfasting on warm water with lemon and porridge oats with skimmed milk, water and honey at around 7.30am.

‘At 9.15am, I’ll have a Piccolo coffee at work,’ Luke told the Sydney Morning Herald. 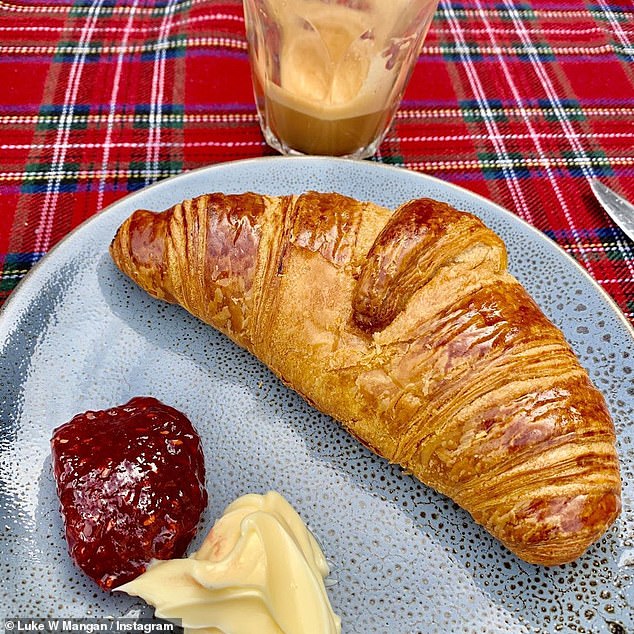 Luke said he often has a couple of breakfasts, including one in a cafe meeting where he might have a croissant with butter and jam (pictured) and a coffee

This is followed by a second breakfast at 10.30am while he conducts a cafe meeting.

Around this time, the chef explained he can’t resist a third coffee and a croissant with butter and jam.

Lunchtime is a busy time in a chef’s kitchen, and it is often the one time when Luke gets to try new potential main courses and desserts for his two restaurants.

On this particular day, he said he had just ‘one bite’ of each of the potential main courses and puddings. 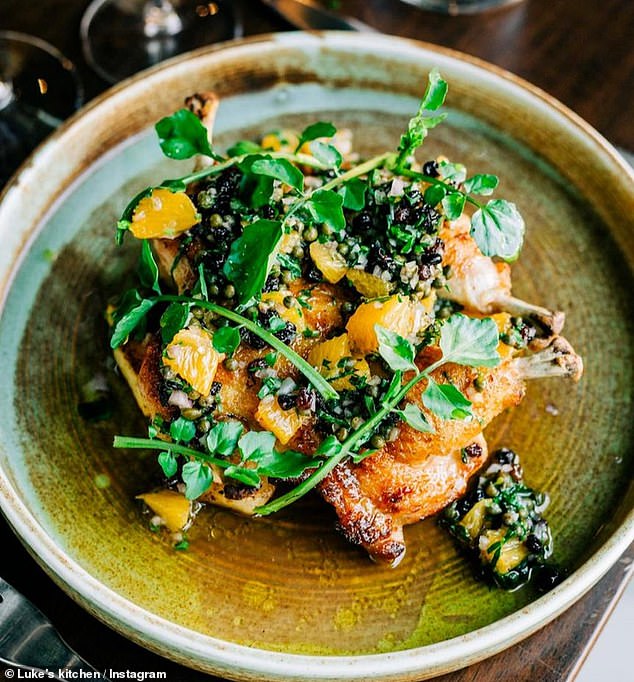 Lunchtime is a busy time in a chef’s kitchen, and is often the one time when Luke gets to try new potential main courses and desserts for his two restaurants (one new dish pictured) 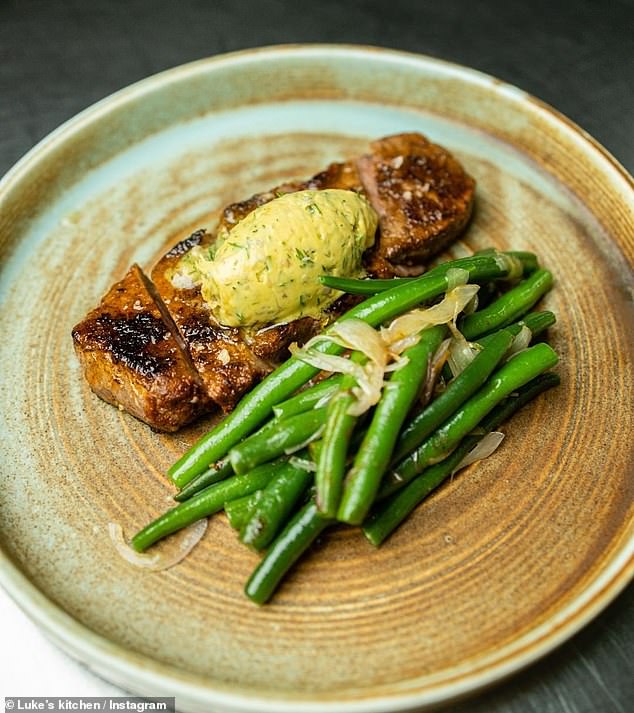 The chef doesn’t eat dinner until 9pm, when he catches a break, but at this time Luke said he treats himself to a ‘200-gram sirloin steak, served medium-rare with green salad and veggies’

Due to the rich nature of the food he tries for his job, Luke explained that he prefers to keep things simple when it comes to having his own lunch:

‘I have a lunch of steamed salmon with green veggies and lemon,’ he told the publication.

The chef doesn’t eat dinner until 9pm, when he catches a quick break, but at this time Luke said he treats himself to a ‘200-gram sirloin steak, served medium-rare with green salad and veggies’.

He accompanies it with a gin and tonic, a glass of Chardonnay and a glass of Shiraz. 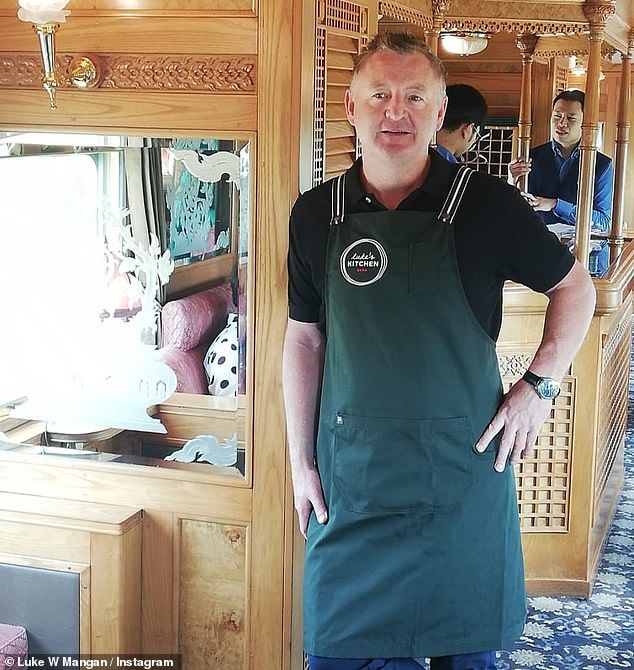 The chef (pictured) previously said that his favourite mid-week dinner depends on the season, but in summer he will typically have something on the barbecue and in winter it’s a soup

The chef previously told Taste that his favourite mid-week dinner depends on the season.

‘In summer, it’s something on the barbie that involves very little washing up! Winter is all about homemade soup; I make a big pot of it and let it bubble away on the stove so there’s always something healthy on hand,’ Luke said.

He also likes to use up any leftovers in soups, pies and frittatas – all of which are both nutritious and delicious. 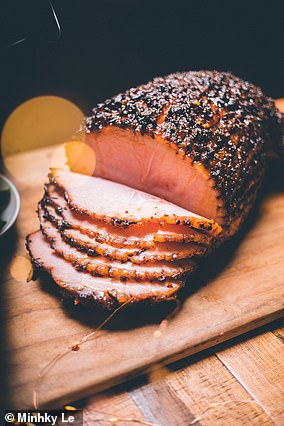 Using a sharp knife, score a zigzag pattern around shank end of ham. Starting at the bottom of ham, slide your fingers under the skin and work them up between skin and fat, loosening the skin as you go. When you reach the scored shank end, gently pull skin back in one piece and discard.

Preheat oven to 190C. Using a sharp knife, trim fat layer, if necessary (this is more likely on a picnic ham), so that fat is no more than 5 mm deep. Score a shallow diamond pattern in fat, at 1.5 cm intervals, without cutting into meat. Stud the point of each diamond with a clove. Place ham in a large roasting pan. Pour orange juice over ham then pour 1/3 cup water into base of pan.

For glaze, combine all ingredients in a small bowl. Brush thickly over ham. Bake ham for 45 minutes, basting with juices occasionally.

Push an uncooked clove into each of 12 bay leaves and press into ham. Brush ham with pan juices then bake for a further 15 minutes or until glaze is deep brown. If juices in pan evaporate too quickly, add a little more water. Transfer ham to a platter.

To carve, remove cloves and bay leaves. Steady the ham with a carving fork (or use a regular dinner fork) then use a long, thin carving knife to carve thin slices away from the bone, following the grain of the meat. Using the fork, transfer slices to a platter. Continue slicing in the same manner, working around the bone, then turn ham over and repeat on the other side. Serve warm or at room temperature with remaining bay leaves, tomato relish and honey mustard. 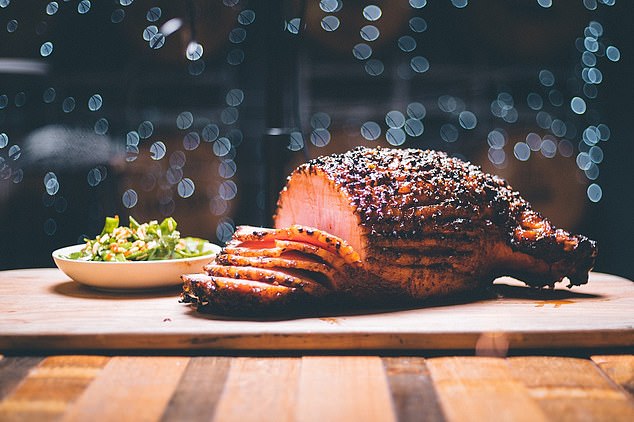 Luke has also shared with FEMAIL his secret to the perfectly succulent honey-glazed ham.

‘Ham tends to have a lot of excess fat, so I like to trim the fat so it’s no more than 5mm deep, otherwise all the beautiful flavours don’t get absorbed,’ Mr Mangan told Daily Mail Australia.

‘Don’t throw away the fat though, it’s great to cook with or put it at the bottom of the baking tray you’ll be putting the ham into.’