Celebrity chef Mike Isabella has been accused of sexually harassing one of his former employees, according to a lawsuit filed Monday in D.C. Superior Court.

The married 43-year-old first came to fame nearly a decade ago, when he competed on Season 6 of Top Chef.

While he only placed seventh in the reality show competition, the national attention landed him a book deal and the capital to launch his restaurant empire.

Today, Isabella heads a $30million restaurant company called Michael Isabella Concepts, with 11 eateries in the Washington, DC-area and surrounding Maryland and Virginia suburbs where the likes of Lady Gaga and Michelle Obama have been known to dine out.

But one former employee is now suing Isabella, his company, and four of his business partners for unspecified damages – saying that before she was fired in December, she was subjected to unwanted touching, inappropriate comments about her butt and derogatory name calling.

Chloe Caras, 33, says she joined Isabella’s company as a regional manager in 2015, helping open three of his properties in Arlington, Virginia. 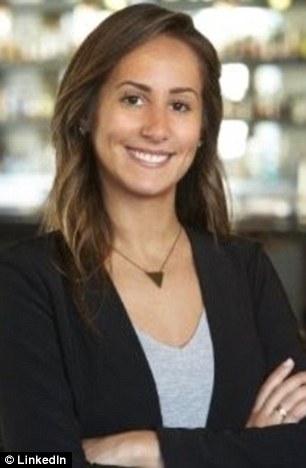 Celebrity chef Mike Isabella, 43 (left), was hit with a lawsuit on Monday by his former director of operations, Chloe Caras, 33 (right)

‘The women bashing, the sexism — that was always there,’ Caras said in an interview with the Washington Post, which exclusive broke the story of her lawsuit. ‘I tried to sometimes play along or ignore it. I thought if I kept doing a good job, I’d be okay.’

In her job, Caras said she was in ‘frequent contact’ with Isabella and his business partners and says she was ‘routinely subject to their sexist comments, insults and ridicule.’

On February 19, 2016, Caras says she was sent a picture of a man licking a man’s buttocks and a man with his penis against what appeared to be a plucked turkey while on a text chain with two of Isabella’s business partners, Taha Ismail and Nicholas Pagonis.

According to the complaint, about a month later, Isabella asked her to name a cocktail the ‘Itchy Kitty’ and she refused.

She says he followed up about the cocktail with a text message on March 11, 2016.

‘What’s wrong, u got one?’ Isabella wrote back. 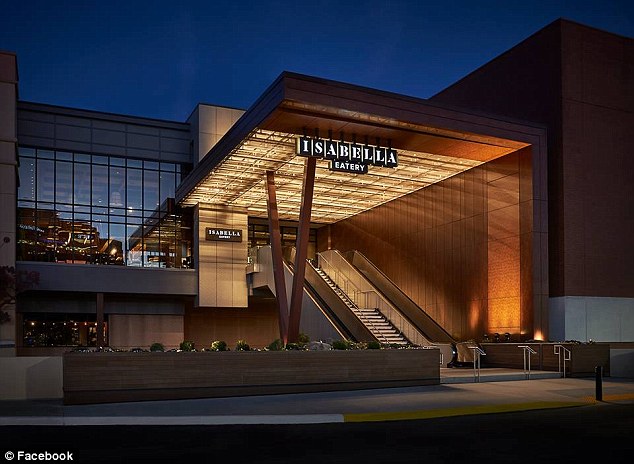 Before she was fired in December, Caras says Isabella touched her inappropriately and called her a ‘b****’. She was helping open the Isabella Eatery (above) in McLean, Virginia

And that’s not all. On April 17, 2016, Caras says Isabella texted her and asked if she was going to a pork festival. When she said no, Isabella responded ‘I thought u were going to be my date.’ Isabella has been married to Stacy Nemeth since 2009.

On separate occasions, Caras says both Isabella and Ismail approached her from behind, grabbed her hair and pretended as if they were having sex with her.

Caras continued to work for Isabella though because she says she had convinced herself that his and his business partners’ behavior was ‘normal’ for the male-dominated industry.

In July 2017, she was promoted to director of operations and put in charge of opening the Isabella Eatery in the Tysons Galleria Mall.

As she readied the restaurant for its launch, she says her bosses continued to harass her via text and make inappropriate comments about her appearance – which she says caused her develop anxiety. 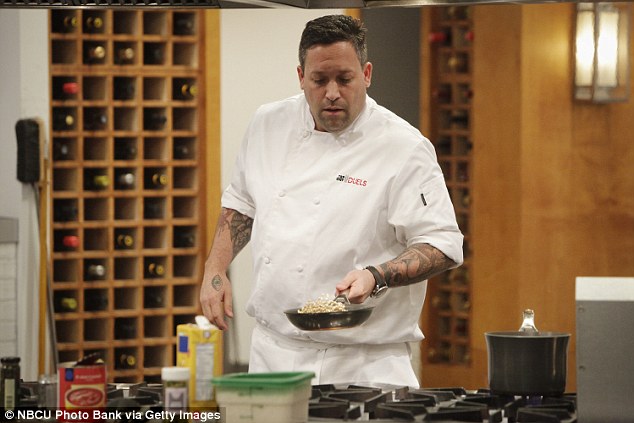 Isabella achieved national attention in 2009 when he competed on Top Chef, placing seventh. He’s pictured above on Top Chef Duels in 2014

All of this reached a tipping point on December 5, 2017, when she says Isabella made yet another sexually-charged comment about her.

The lawsuit says Isabella had ‘consumed numerous drinks throughout the day and appeared visibly intoxicated’ when a male sous chef approached him and Caras,  who were both seated in a booth.

The sous chef asked if he could join them and Caras says Isabella responded: ‘If you sleep with Chloe, you can’.

Caras told the Post that she told Isabella to stop and ‘he immediately got angry’.

‘As Ms Caras reached the door to exit the restaurant, Mr Isabella chased after her and continued calling her a “b****” and tauntingly shouted, “Love you, Chloe. Nice working with you,”‘ the lawsuit states.

Caras says he then fired her. Isabella is now the head of a $30million restaurant company that includes 11 restaurants in the DC-area and surrounding suburbs. He’s pictured above working at his restaurant Graffiato in 2011

Isabella and his partners have denied the accusations and say the company does not discriminate against employees based on their sex.

‘Simply put, the allegations of an unwelcoming or hostile work atmosphere are false,’ Isabella and the accused partners said in a statement prepared by the Bascietto & Bregman law firm. ‘Harassment, discrimination, bullying, abuse, or unequal treatment of any kind whatsoever are not tolerated at MIC.’

They added: ‘After years of working for MIC and never before raising these allegations, in December, [Caras] stormed off the job and refused to return, insisting she had been fired.’ 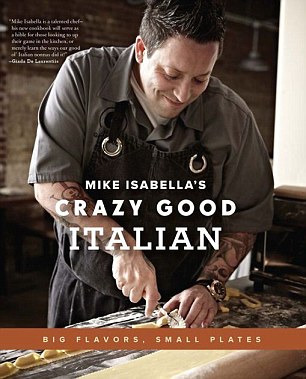 Isabella is also the author of a cookbook, Crazy Good Italian

And Caras isn’t the only one who says she experienced a toxic male culture at the company.

Sarah Hancock, who worked as a pastry chef for Isabella from July 2017 to February, says that the chef kissed her on the cheek without her consent in late December and told her he would make her a superstar.

She told her boyfriend about the unwanted kiss via text message and said that ‘it made my skin crawl’.

Hancock said the work environment at Isabella Eatery was ‘degrading’ for women.

‘It’s just not for me — to be treated in a way that feels like the workplace is a frat house,’ Hancock said. ‘The word “whore” was used quite often in the kitchen, and I hated it.

Isabella has previously come under fire for making a sexist comment.

During a 2009 televised clam-shucking event, Isabella said ‘a girl shouldn’t be at the same level that I am’.

The comment sparked outrage but Isabella insisted it was ‘a joke’.

‘I was raised in a broken family by my mother and my sister so I have plenty of respect for women. It was sarcastic,’ he later said.