Celebrity stylist Jo Ferguson has been farewelled by her mother, brother and his wife at a humble funeral service – a stark contrast to how she lived her life.

Ferguson, 46, died in hospital on April 8 from serious health problems including liver and kidney failure, both stemming from years of much publicised alcohol abuse.

At the height of her career, Ferguson was fashion editor at Cleo magazine and the go-to stylist for many leading celebrities.

She was a regular at A-list events and on red carpets.

But none of that glamour was on display at the small chapel in Adelaide on Thursday.

Ferguson’s mother Patricia, Scott and sister-in-law Eliza smiled bravely as they arrived to mourn their loved one.

Celebrity stylist Jo Ferguson, 46, has been farewelled by her mother Patricia, brother Scott and his wife Eliza at a humble funeral service in Adelaide – a stark contrast to how she lived her life 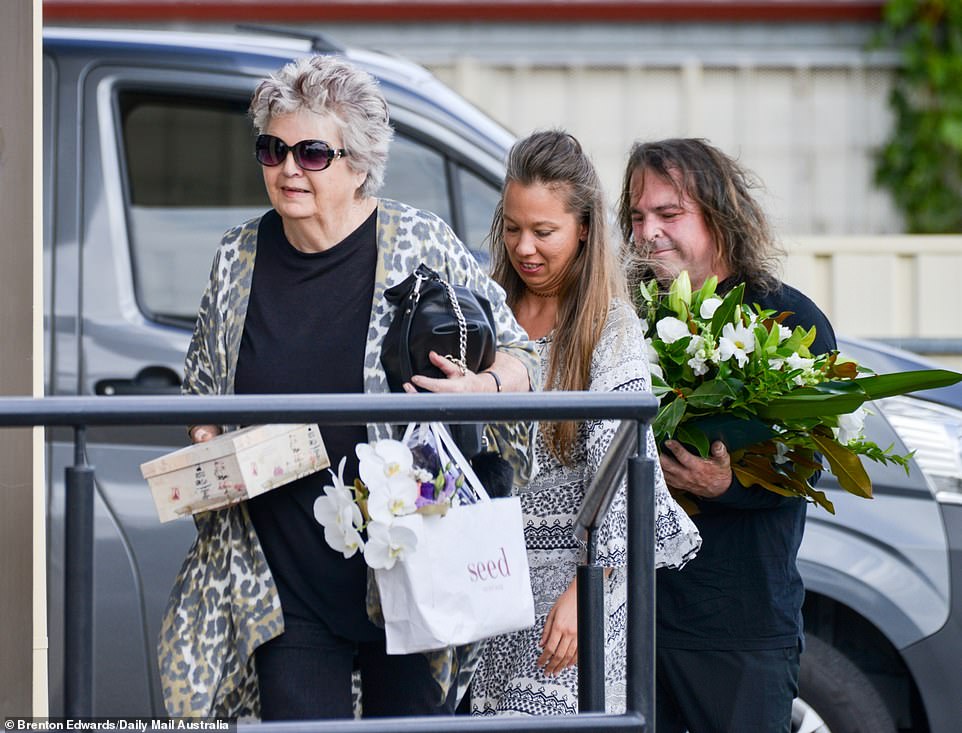 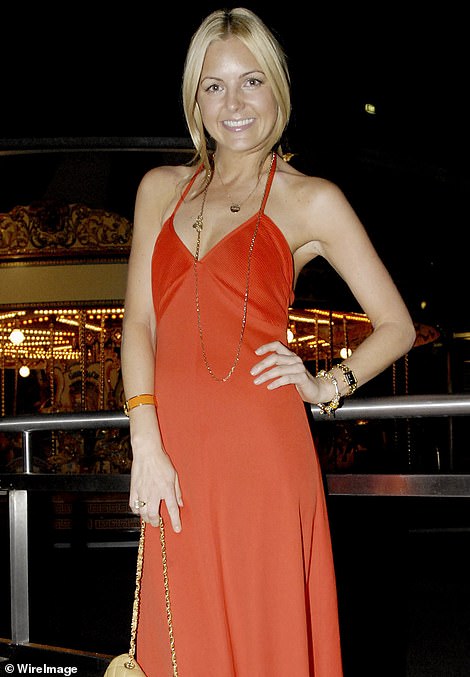 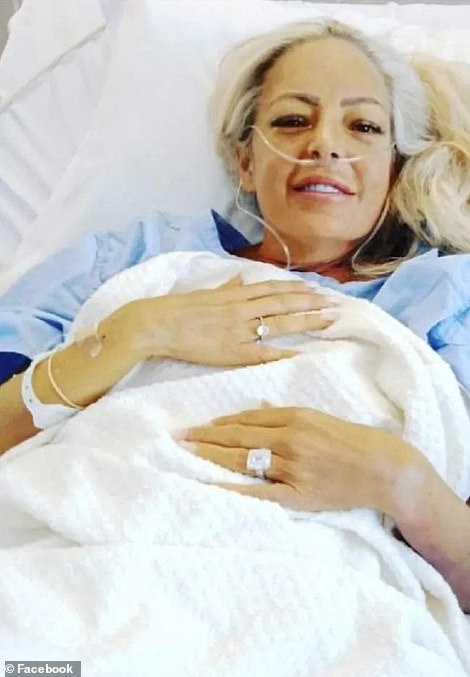 Once a stylist to the stars, Ferguson, 46, died in hospital on April 8 from serious health issues including liver and kidney failure, both stemming from years of much publicised alcohol abuse

Strict coronavirus measures meant there could be no more than 10 mourners in the service, while travel restrictions affected the ability of friends travelling interstate to attend.

After the brief service, a wicker coffin with Ferguson’s body was taken away on a motorbike to be cremated – just as she had requested.

Despite losing some of her celebrity friends as her life spiraled over the years, many paid tribute to the stylist in the wake of her death.

A friend, Lisa Poulos, asked people to light a candle at 1pm, the time of Ferguson’s funeral, to honour her, and to leave messages of love which would be passed on to her family.

Among those to write a lengthy tribute was model Kristy Hinze, for whom Ferguson was bridesmaid at her 2009 wedding to U.S billionaire James Clark.

‘I’ve met some of the best people I know in the world because of Jo Ferguson. Jo was my best friend,’ Hinze wrote.

But she said ‘depression, anxiety and alcohol didn’t mix well’ with her friend’s mental health issues, and she wished they had got the chance to ‘part differently’.

‘When I knew Jo she was vivacious with an infectious smile and a lust for life. The girl every girl wanted to be,’ Hinze wrote.

‘Quick with wit, confidence sublime, charismatic and beautiful inside and out. 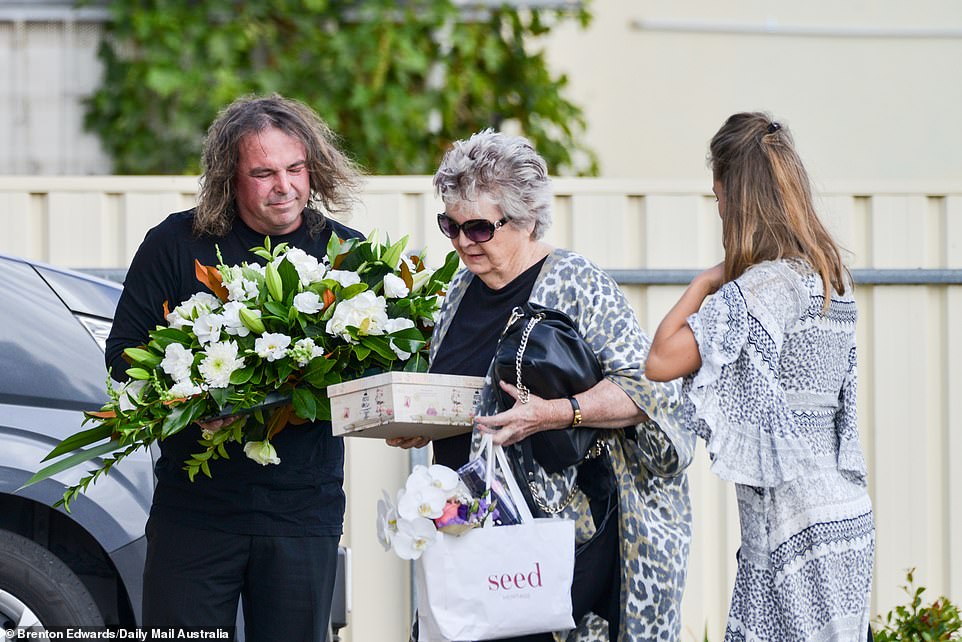 Strict coronavirus measures meant there could be no more than 10 mourners in the service, while travel restrictions affected the ability of friends interstate to attend 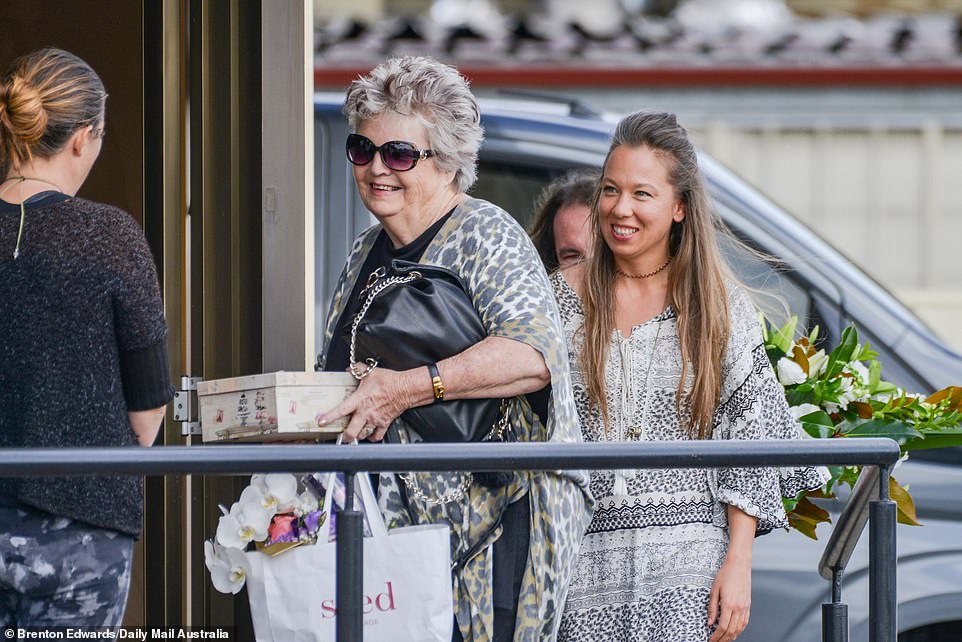 ‘She was here. She was loved. Her life made a difference,’ an emotional death notice written by her loved ones read 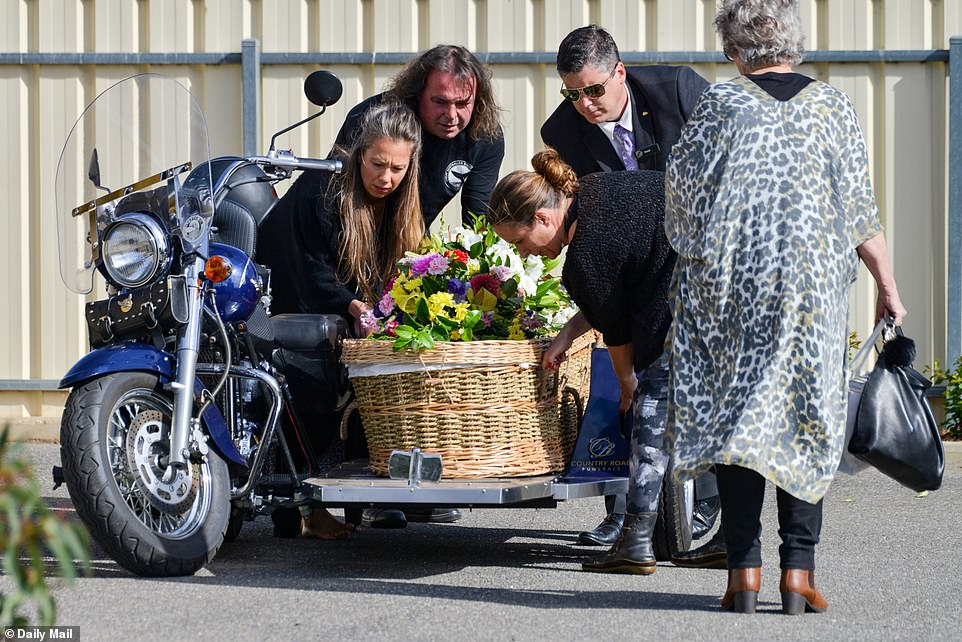 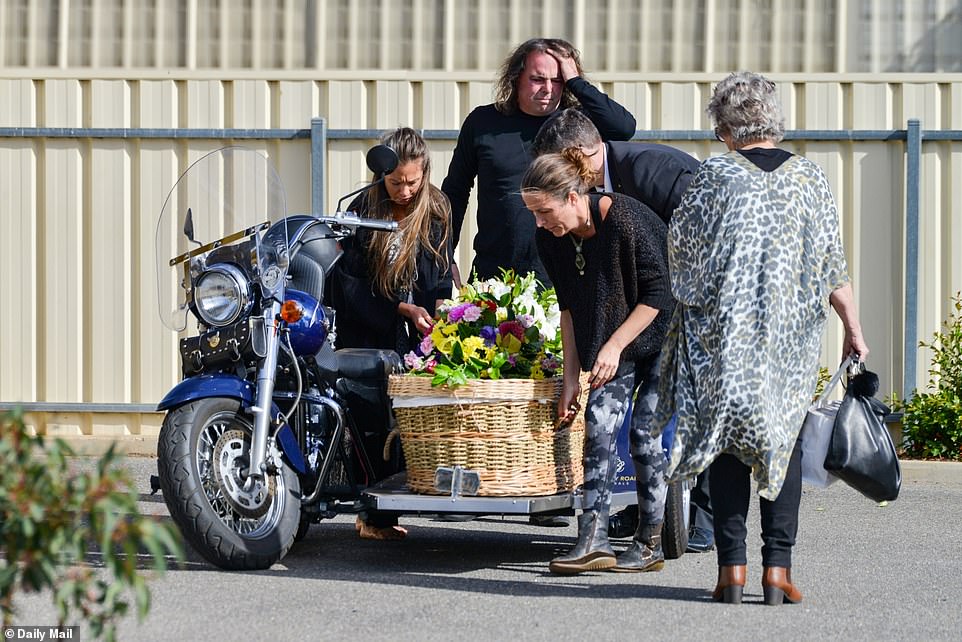 Her emotional brother Scott, his wife Eliza and mother Patricia look on as the wicker casket is placed on the motorbike 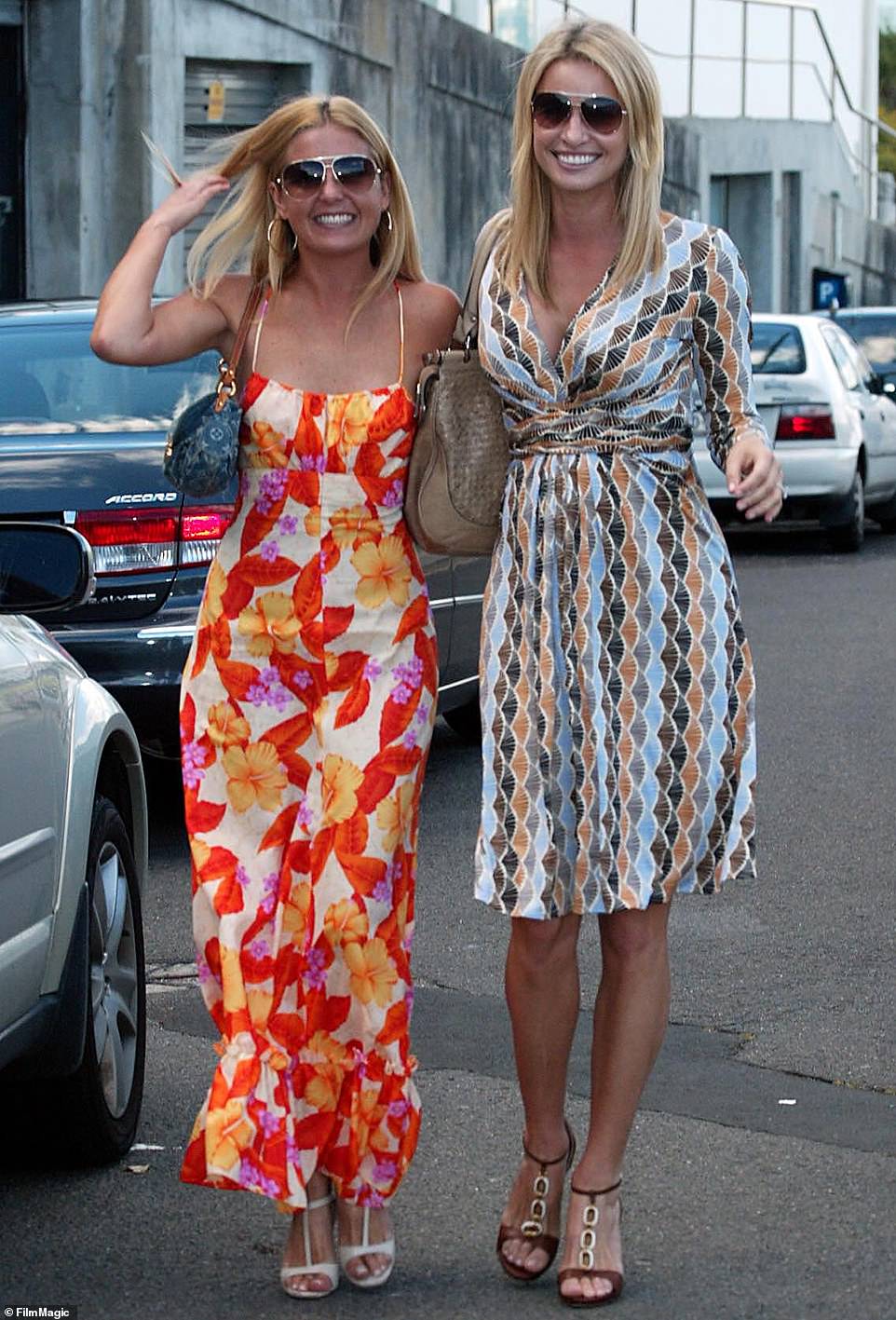 In a raw tribute, Ferguson’s best former friend Kristy Hinze said ‘alcohol didn’t mix well’ with her mental health issues and admitted wished they had got the chance to ‘part differently’ (The pair are pictured leaving Bondi Icebergs together in 2008, at the prime of their socialite days)

‘I’m heartbroken that we never had the chance to part differently. I can’t change that now but I wish upon wish that I could see that sparkle again.

‘I love you Jo. I hope you are finally at peace.’

Once being among the most recognisable faces on the town, Ferguson’s downwards spiral began in the early 2010s.

She quit her job at Woman’s Day with a sudden email at 4.30pm one Friday in 2011, a move that concerned many of those close to her.

Soon she was asking friends for money and had turned to alcohol.

But a funeral notice from her family this week gave insight into Ferguson’s desperate efforts to turn her life around in recent years. 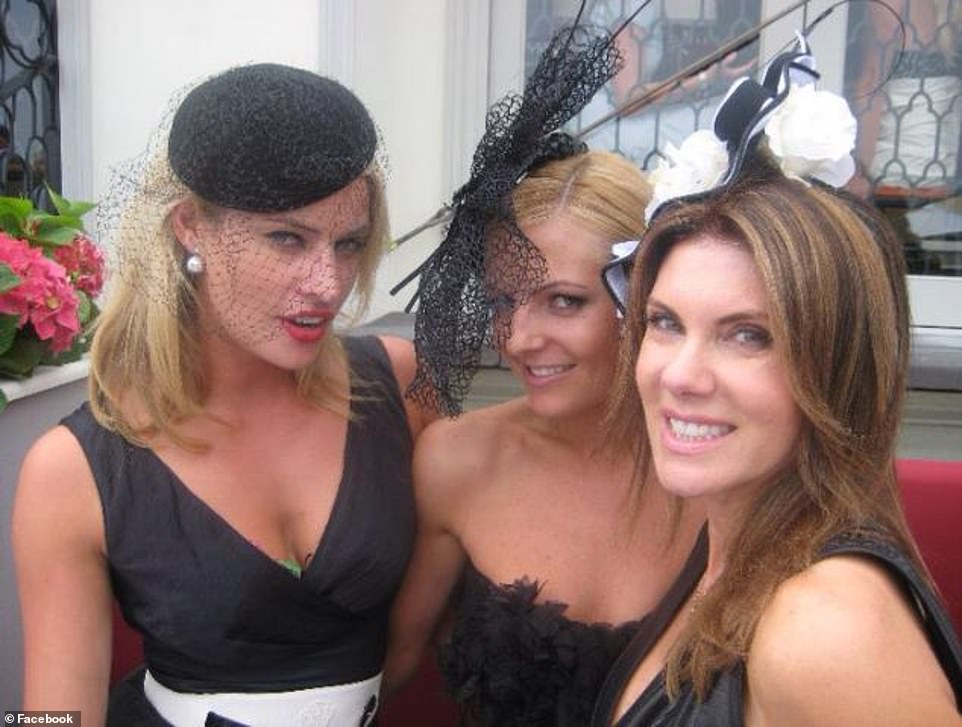 ‘I love you Jo. I hope you are finally at peace,’ Hinze (left) wrote about her friend Ferguson (centre) and admitted she wished they had been able to end things on a different note 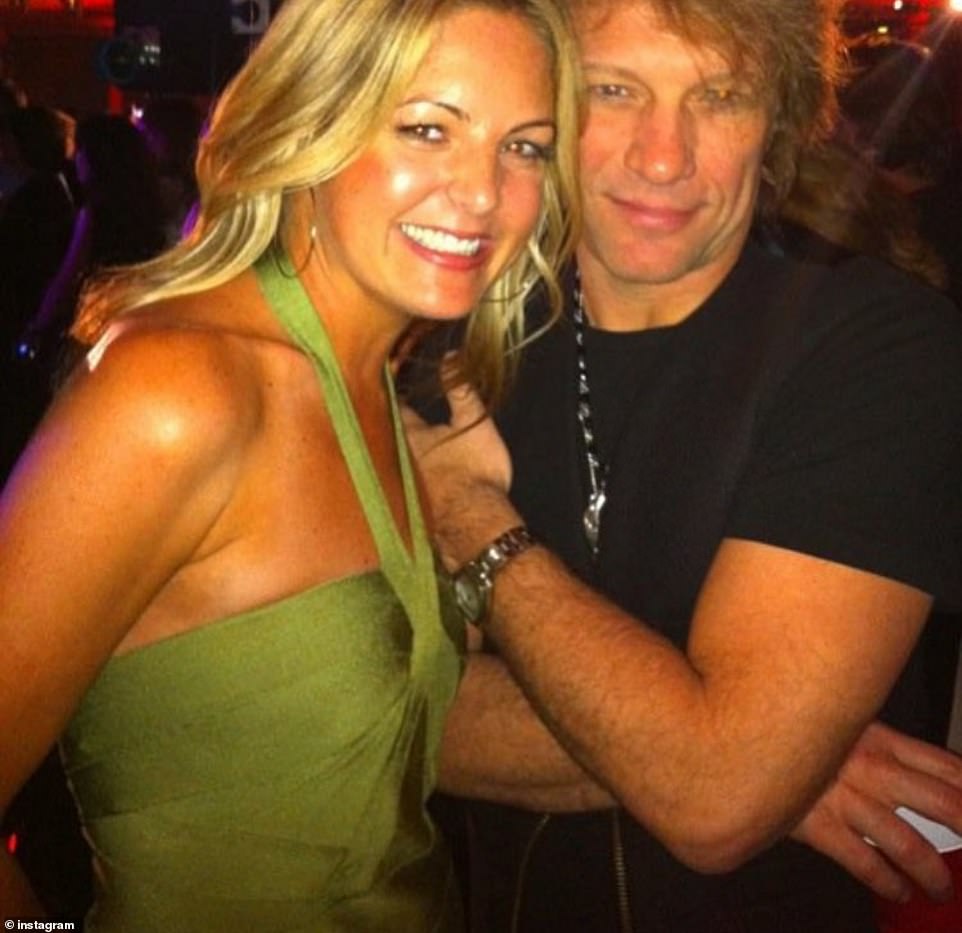 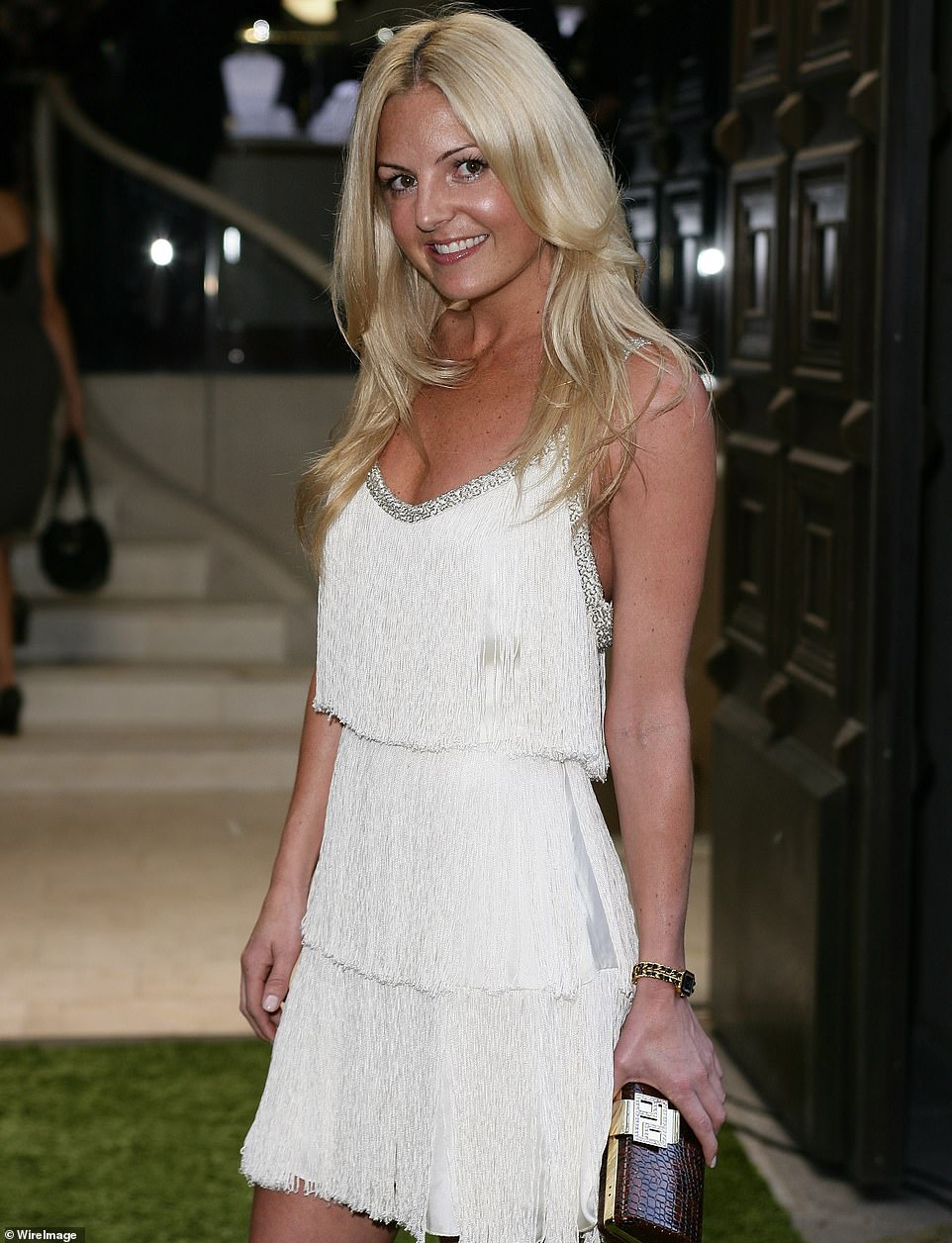 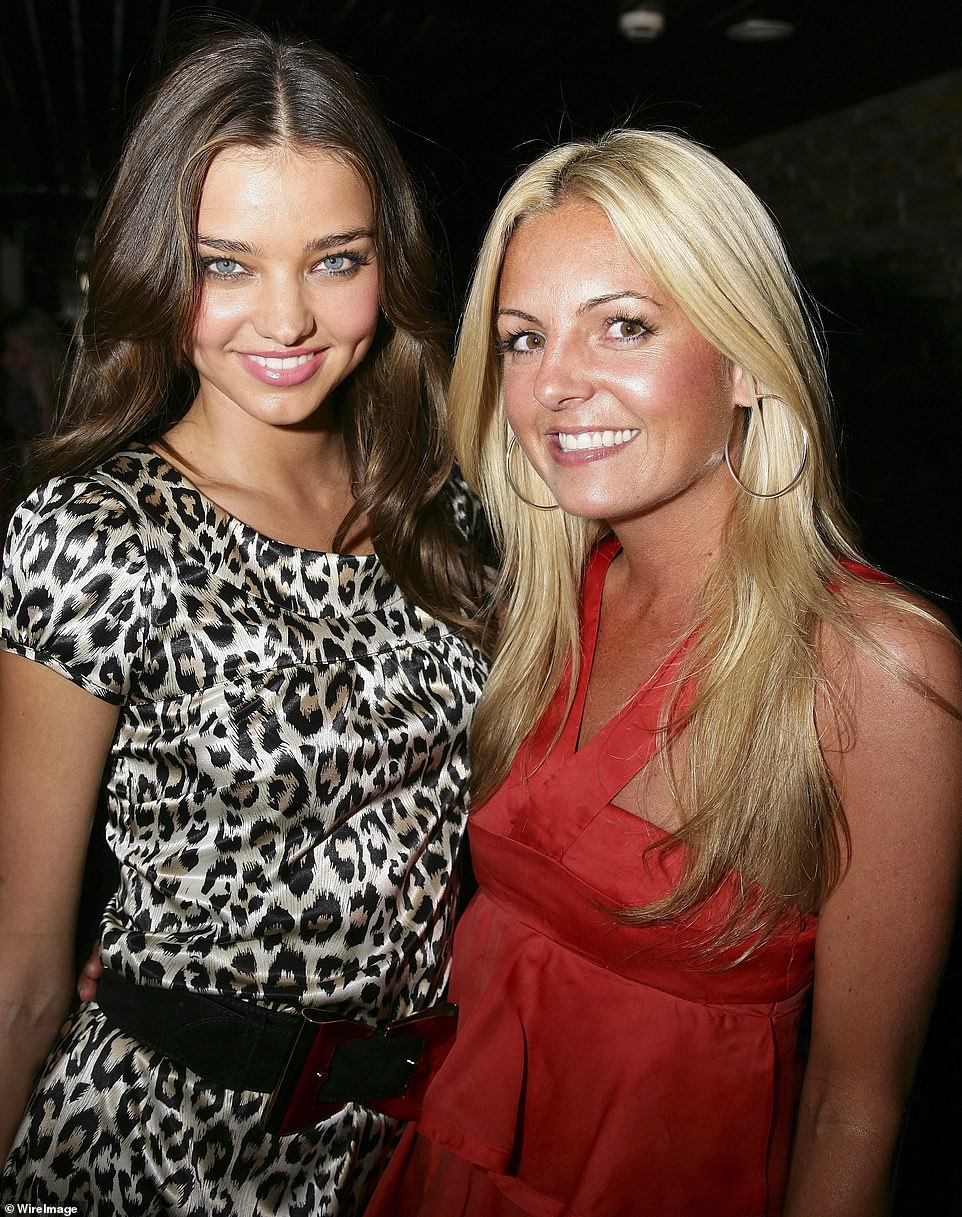 The bubbly blonde is pictured with supermodel Miranda Kerr at an A-list party in Sydney on September 13, 2007

‘Jo lived three lifetimes in her amazing 46 years. She travelled the world during her spectacular styling career and her enthusiasm and joyous nature helped her achieve considerable recognition, which made her whole family proud,’ the notice read.

‘She spent an inordinate time on her phone… buying things. Her new house was her dream and she filled it with striking artworks and stunning furniture.

‘Numerous parcels continuously arrived at her home… Christmas every day.

She was here. She was loved. Her life made a difference…

‘She was here. She was loved. Her life made a difference.’

Ferguson, who was diagnosed with blood poisoning in late 2019, was placed on a life support machine in March, only to be discharged and then readmitted.

The blood poisoning came after a complication from a blood transfusion, following a fall down the stairs of her Sydney apartment in 2016.

She moved to Adelaide to be closer to family after the accident.

In her final days, Ferguson asked doctors to turn of her life support instead of staying sober for six months which would have qualified her for a life-saving liver transplant.

Tributes flowed from the Sydney celebrities she once styled and partied with in the days after her death was announced by brother Scott.