Celebs who joined the #BelieveSurvivors protests

At 1pm, thousands of people across the US walked out of their schools and places of work in protest of Supreme Court nominee Brett Kavanaugh.

The demonstration, called the #BelieveSurvivors walkout, was organized to send a message that many people are against the appointment in the wake of allegations of sexual assault against Kavanaugh, and that they believe his accusers.

And dozens of famous faces joined in the protest, with actors, comedians, writers, and politicians posting pictures and tweeting about the cause.

Cut him loose? Thousands of people across the US walked out of their schools and places of work today in protest of Supreme Court nominee Brett Kavanaugh 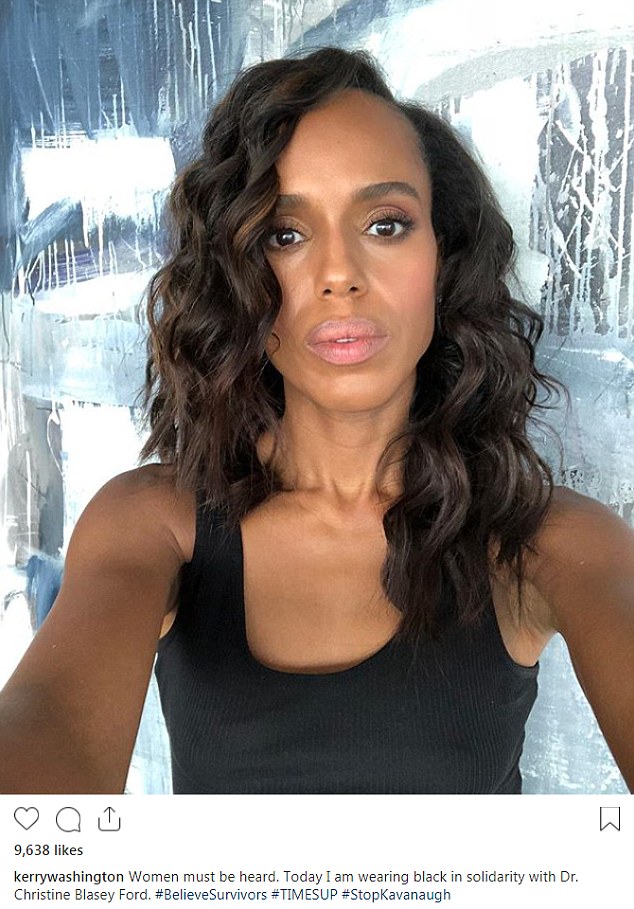 Support: Celebrities like Kerry Washington joined in to stand in solidarity with Christine Blasey Ford 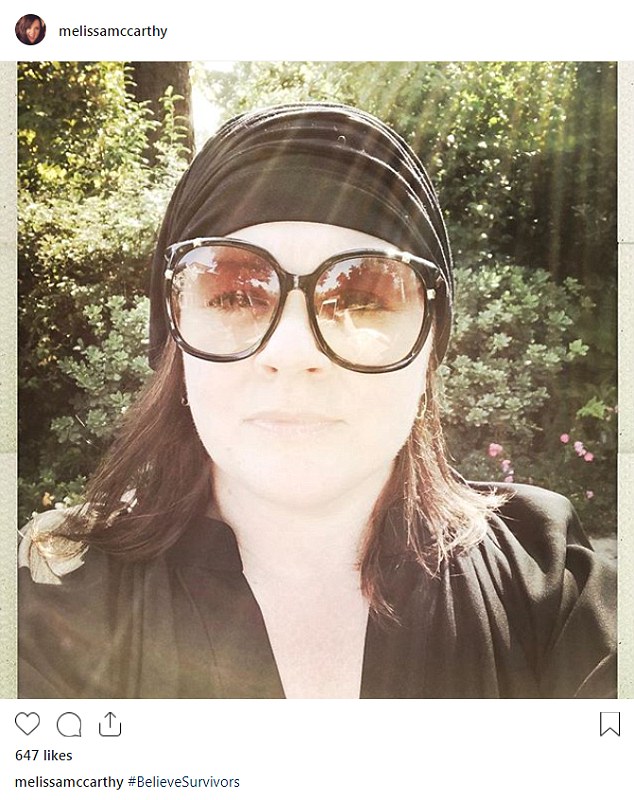 Tag it: They all used the #BelieveSurivors hashtag (pictured: Melissa McCarthy) 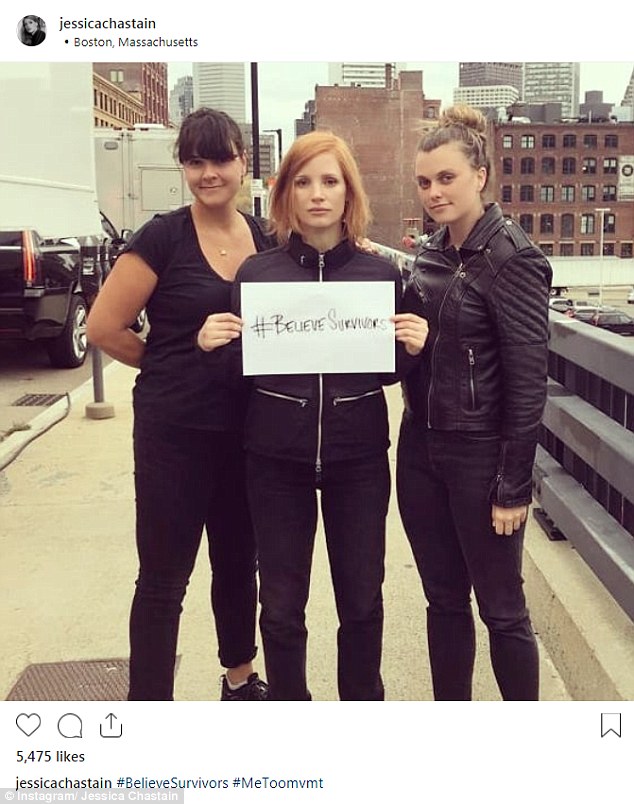 Standing up: Jessica Chastain posed a picture and wrote the hashtag on a sign 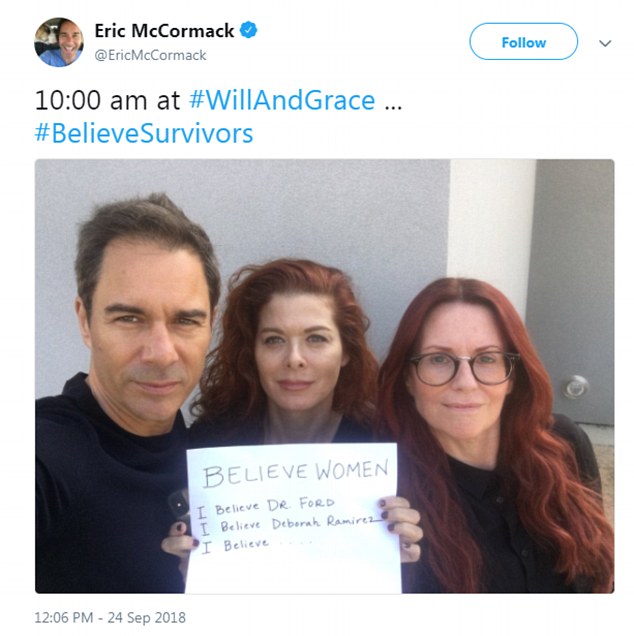 Where’s Jack? Three members of the cast of Will & Grace posed together

The walkout lasted from 1 to 2pm today, and participants were encouraged to wear black to show their support.

Several organizations, including NARAL and Planned Parenthood, took to social media to explain the purpose.

‘We believe Dr. Christie Blasey Ford & we stand with her,’ NARAL tweeted. ‘Kavanaugh should be disqualified from the Supreme Court — & the GOP must stop bullying her. Join us in solidarity by wearing black & walking out of work/school/home on Monday at 1 pm ET + posting a photo.’

While the number of participants is still unknown, thousands of people tweeted using the hashtag today and in the weekend leading up to the event.

Among those who participated include Alyssa Milano, who recently spoke out about her own sexual assault as a teenager. 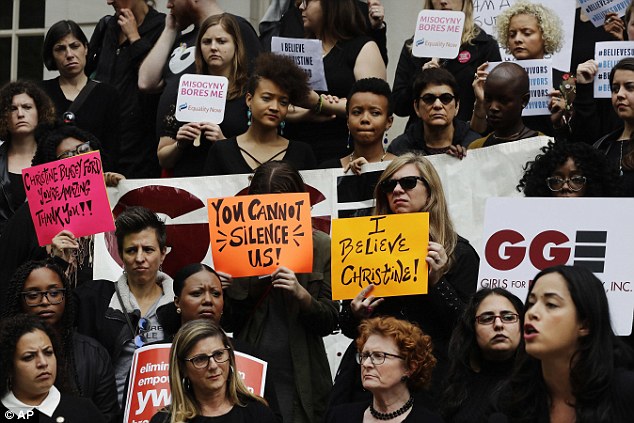 National mood: Thousands of men and women across the country walked out in protest 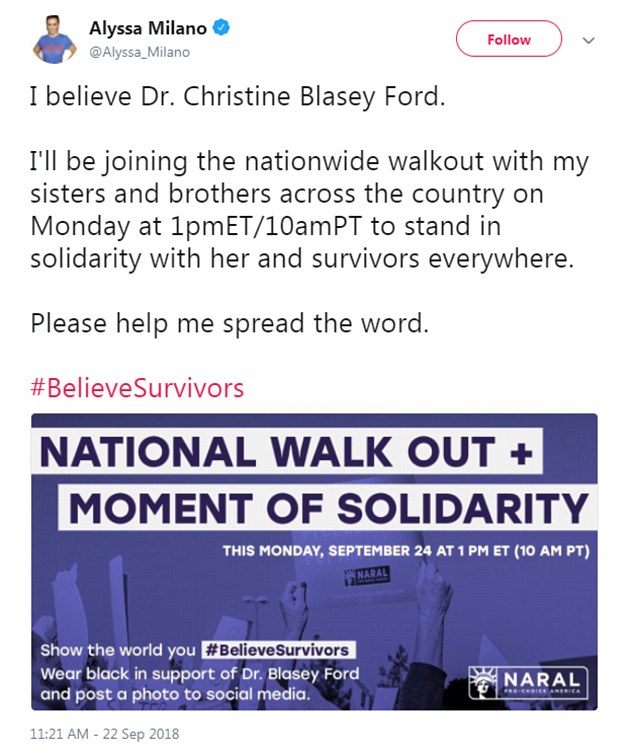 Touched by it: Alyssa Milano tweeted her support after speaking out about her own assault this week

Joiner: Shamless star Emmy Rossum counted down the moment to the protest 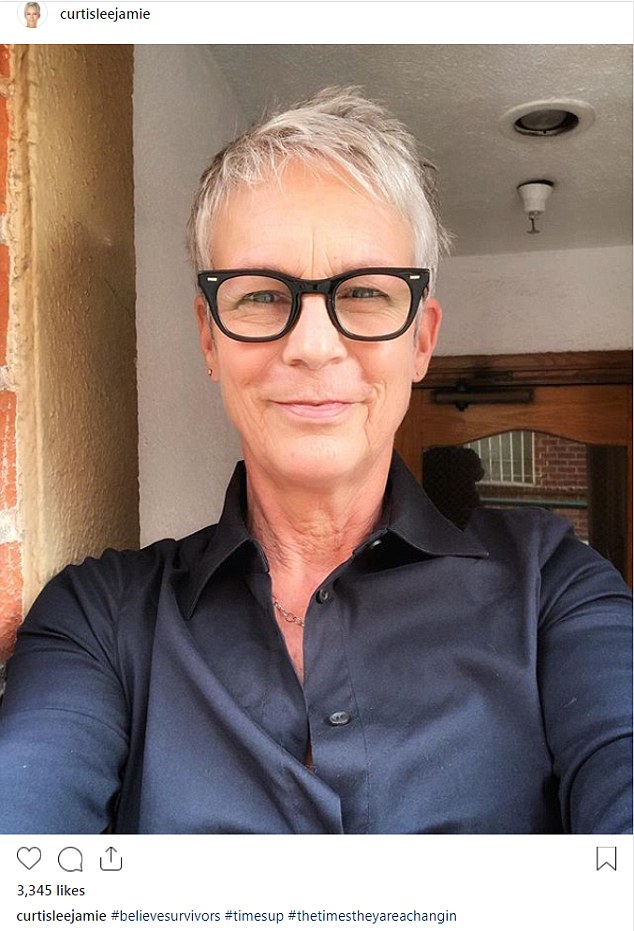 Important: Jamie Lee Curtis also took a picture of herself and used the hashtag #TimesUp

To the source: Jane Fonda was one of many to protest in D.C. 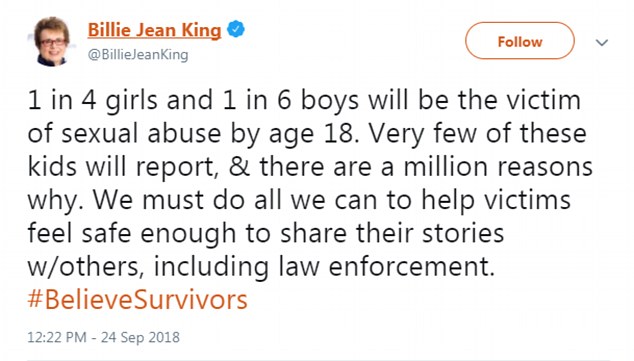 Believe them! Tennis player Billie Jean King chimed in with some stats about sexual abuse

Piper Perabo, who was among the protesters to attend the early days of the confirmation hearings, also tweeted about it multiples times.

In fact, whole television casts joined in, sharing group photos as they protested from set.

Eric McCormack posed with his Will & Grace co-stars Debra Messing and Megan Mullally, with all three sharing pictures online. 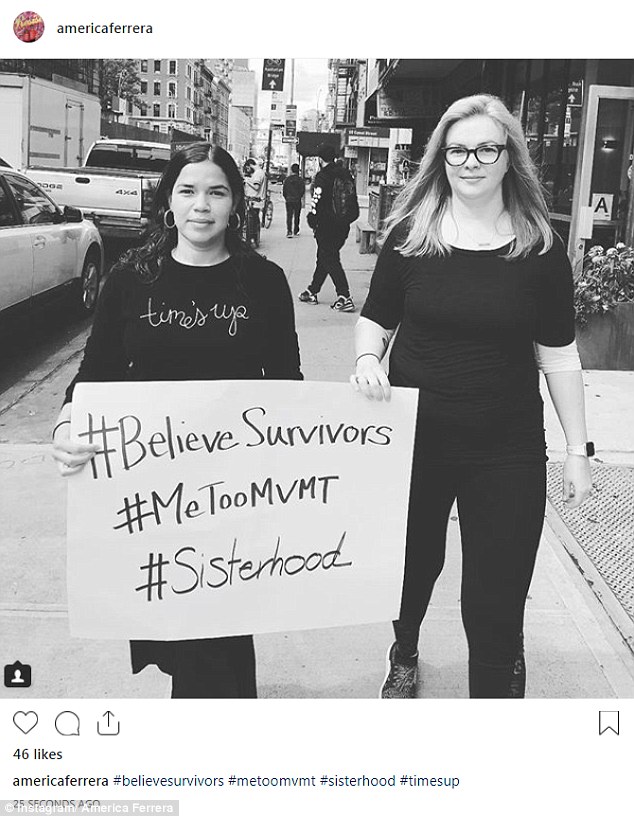 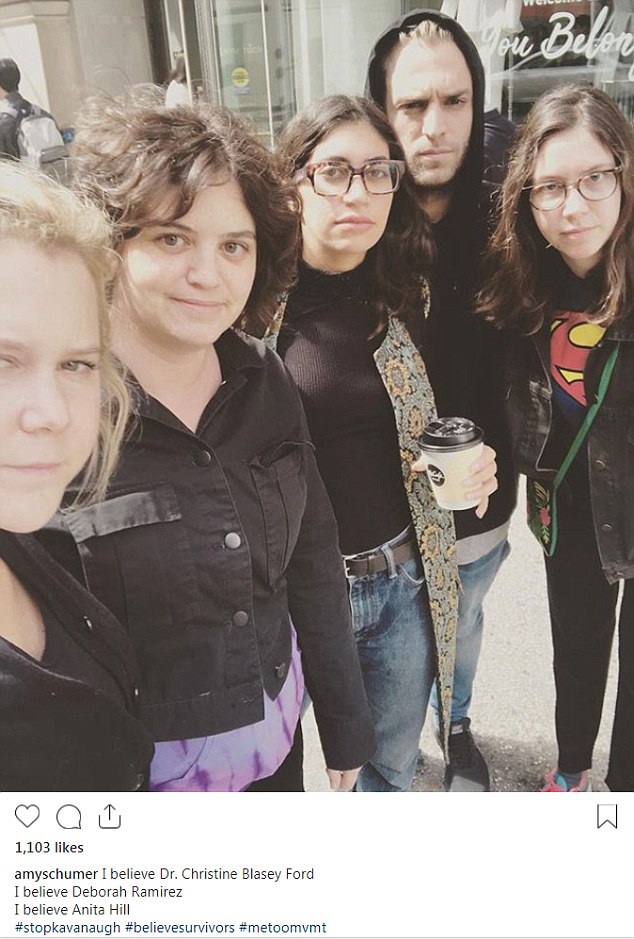 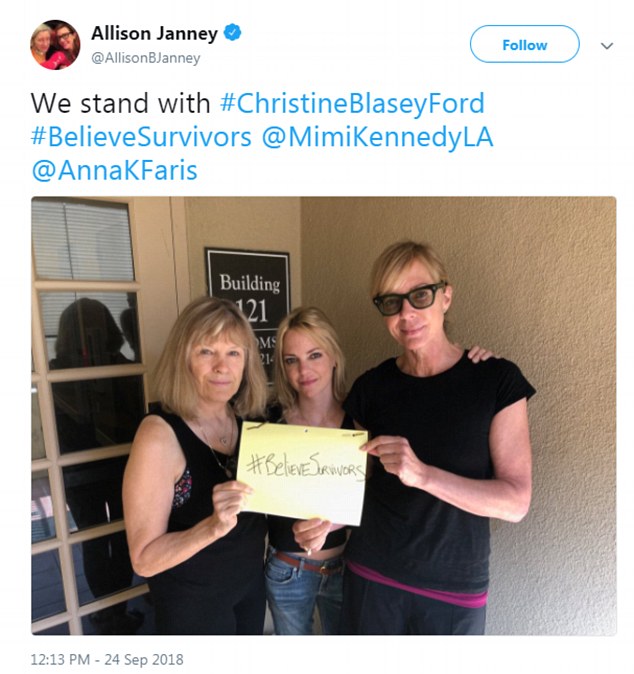 Cast: Allison Janney joined in with two of her Mom co-stars, Anna Faris and Mimi Kennedy 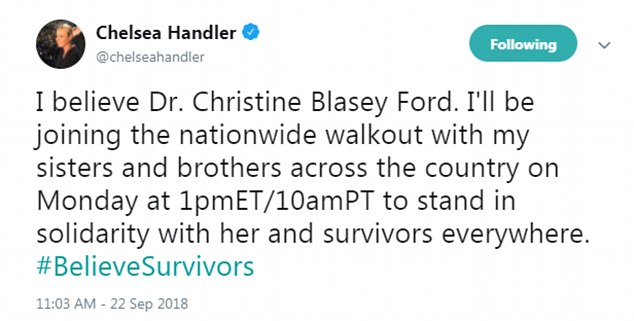 Spreading the word: Chelsea Handler tweeted about the demonstration over the weekend 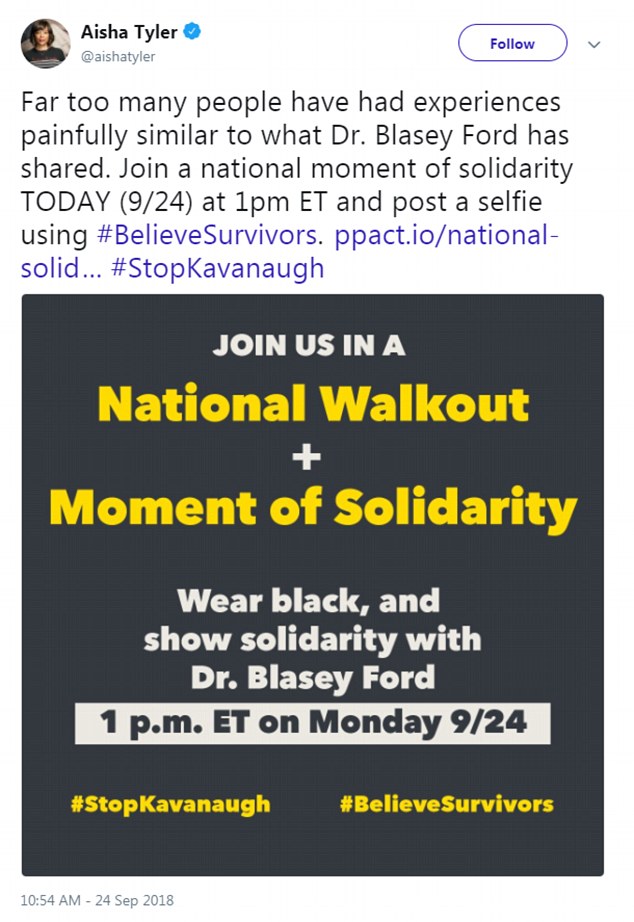 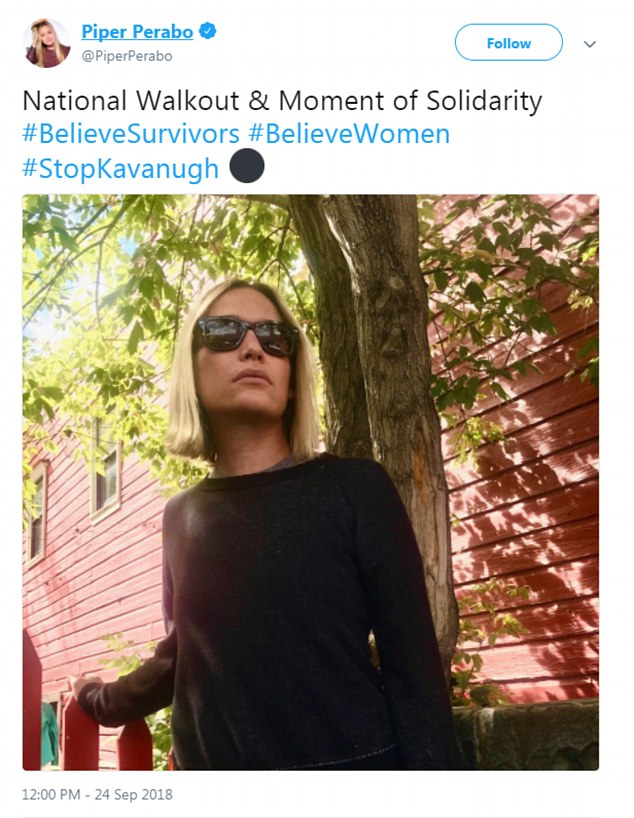 On it: Piper Perabo, who was among the protesters to attend the early days of the confirmation hearings, also tweeted about it multiples times

Allison Janney shared a picture with her Mom co-stars Anna Faris and Mimi Kennedy too.

Aisha Tyler tweeted: ‘Far too many people have had experiences painfully similar to what Dr. Blasey Ford has shared. Join a national moment of solidarity TODAY (9/24) at 1pm ET and post a selfie using #BelieveSurvivors’

Tennis star Billie Jean King also weighed in, writing: ‘1 in 4 girls and 1 in 6 boys will be the victim of sexual abuse by age 18. Very few of these kids will report, & there are a million reasons why. We must do all we can to help victims feel safe enough to share their stories w/others, including law enforcement.’

In addition to celebrities, several people currently running for public office shared their support, joining a handful of congresspeople who added their piece.

Shortly after Kavanaugh was nominated, Dr. Ford came forward to say that, when they were in high school, he attacked her. 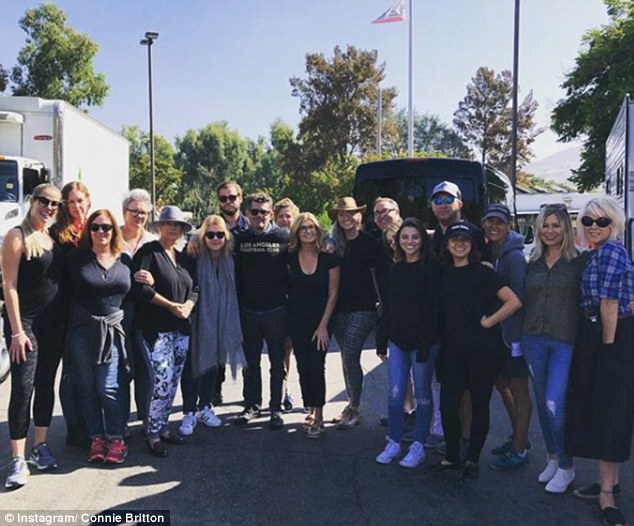 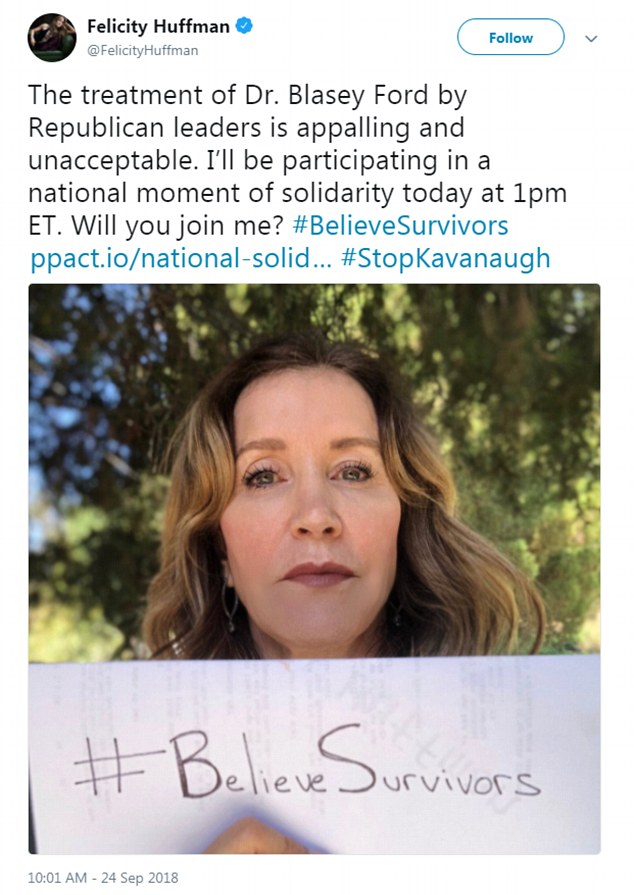 Reaching out: Felicity Huffman held up a sign with the hashtag 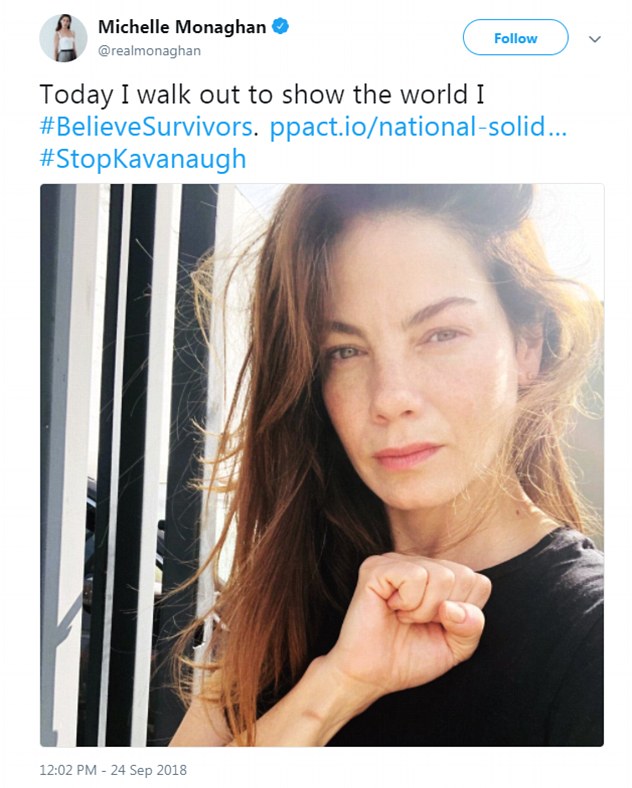 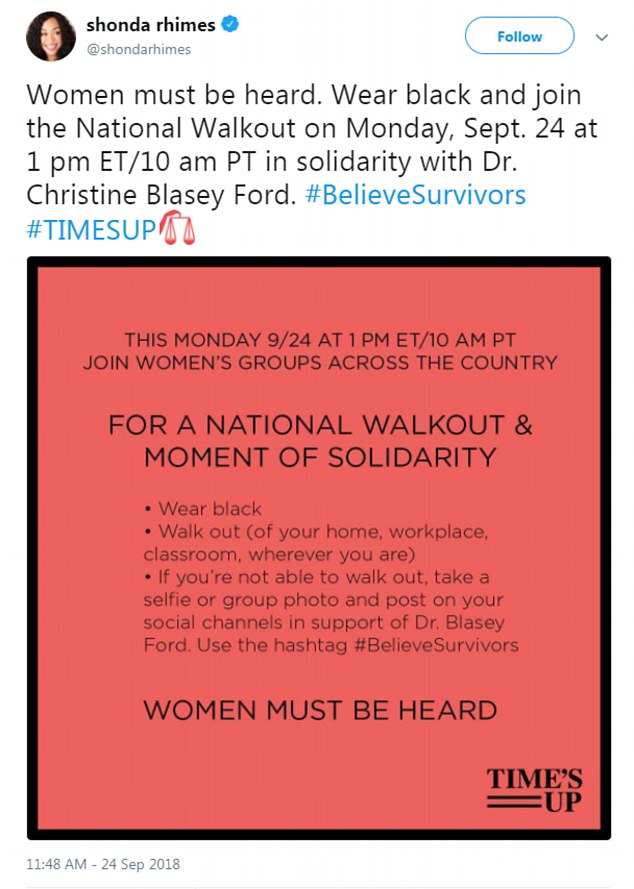 Get out there: TV exec Shonda Rhimes promoted the protest on Twitter

‘Brett Kavanaugh physically and sexually assaulted me during high school in the early 1980’s. He conducted these acts with the assistance of his close friend, Mark G. Judge,’ she wrote in a letter to Sen. Dianne Feinstein.

‘Both were 1-2 years older than me and students at a local private school. The assault occurred in a suburban Maryland area home at a gathering that included me and 4 others.

‘Kavanaugh physically pushed me into a bedroom as I was headed for a bathroom up a short stairwell from the living room. They locked the door and played loud music, precluding any successful attempts to yell for help.

‘Kavanaugh was on top of me while laughing with Judge, who periodically jumped onto Kavanaugh. They both laughed as Kavanaugh tried to disrobe me in their highly inebriated state.

‘With Kavanaugh’s hand over my mouth, I feared he may inadvertently kill me. From across the room, a very drunken Judge said mixed words to Kavanaugh ranging from “go for it” to “stop.”

‘At one point when Judge jumped onto the bed, the weight on me was substantial. The pile toppled, and the two scrapped with each other.

‘After a few attempts to get away, I was able to take this opportune moment to get up and run across to a hallway bathroom. I locked the bathroom door behind me.

‘Both loudly stumbled down the stairwell, at which point other persons at the house were talking with them. I exited the bathroom, ran outside of the house and went home.

‘I have not knowingly seen Kavanaugh since the assault. I did see Judge once at the Potomac Village Safeway, where he was extremely uncomfortable seeing me.

‘I have received medical treatment regarding the assault. On July 6, I notified my local government representative to ask them how to proceed with sharing this information. It is upsetting to discuss sexual assault and its repercussions, yet I felt guilty and compelled as a citizen about the idea of not saying anything.’ 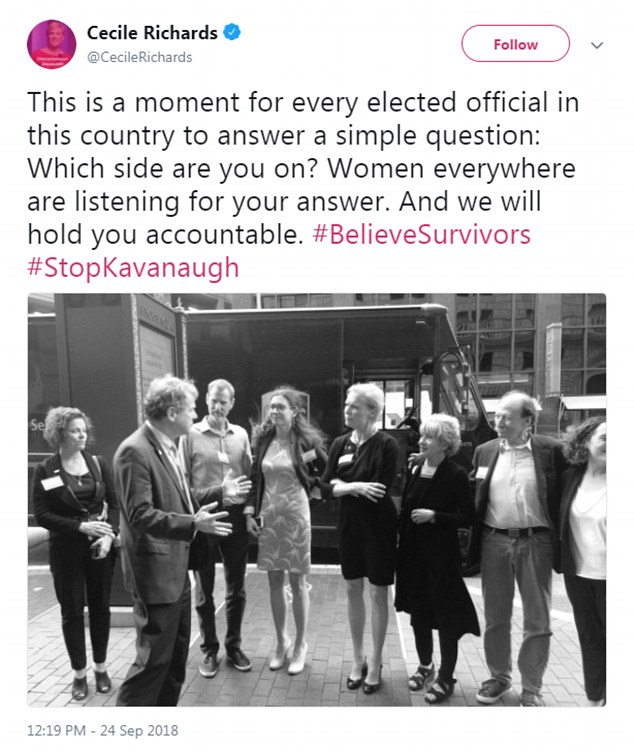 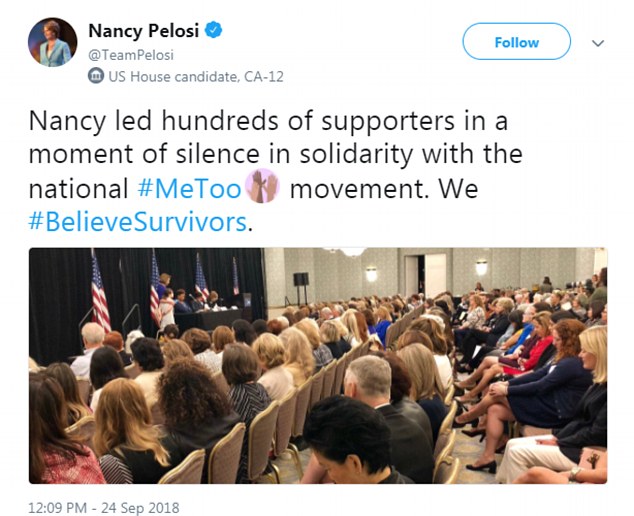 She believes them: Nancy led supporters in a moment of silence 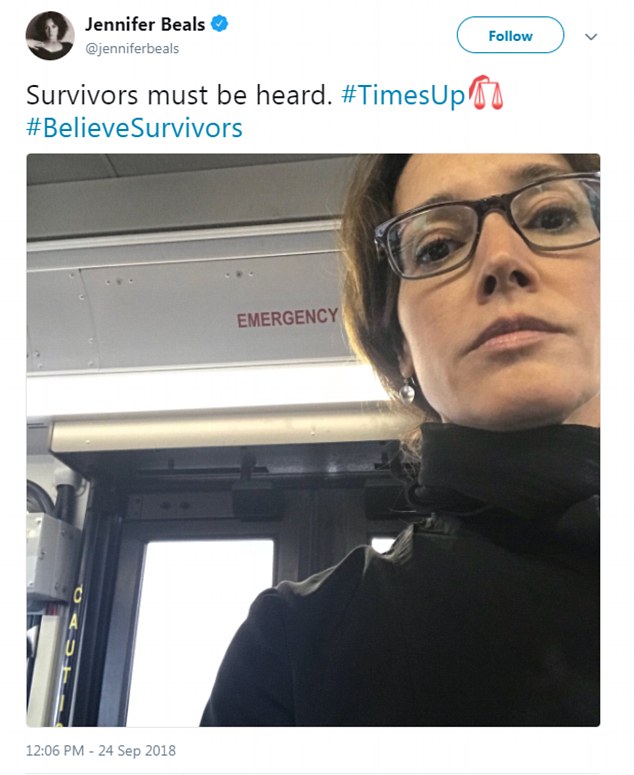 Not dismissing: Jennifer Beals shared a selfie on public transportation 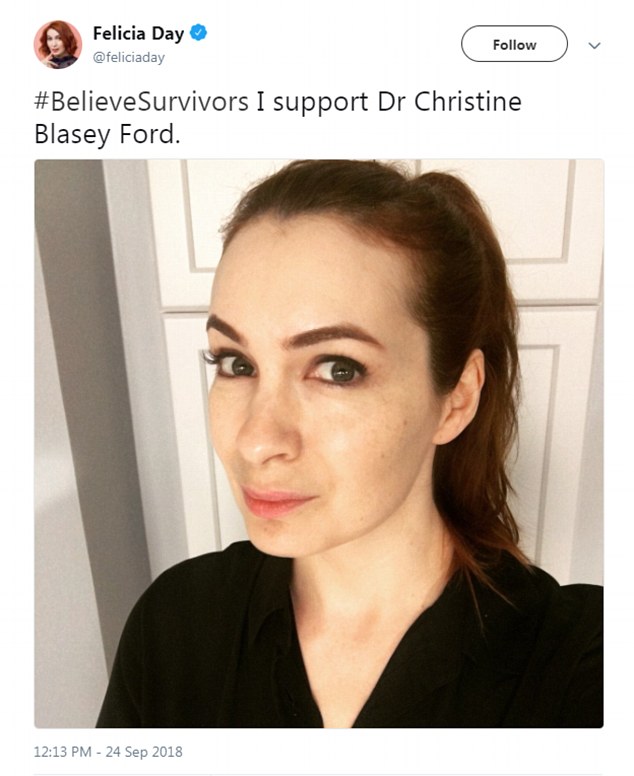 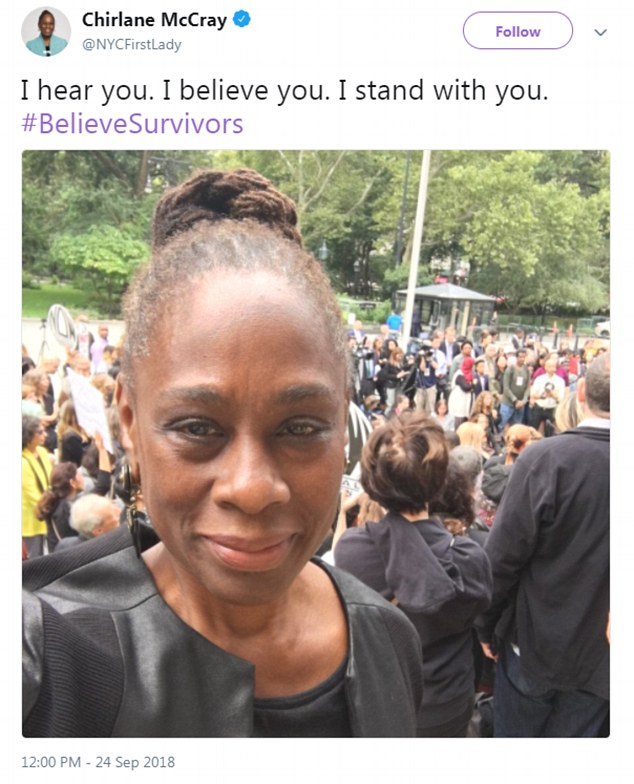 Early: First Lady of New York City Chirlane McCray (who is married to mayor Bill de Blasio) was at a protest

Kavanaugh has denied that the assault happened.

Then this week, Kavanaugh’s former Yale classmate Deborah Ramirez came forward with her own story after being contacted by The New Yorker, which had heard about her experience through another party.

Ramierz said when they were in college, Kavanaugh  exposed himself to her, thrust his penis in her face, and ’caused her to touch it without her consent as she pushed him away’, according to the magazine.

What’s more, lawyer Michael Avenatti now says he is representing yet another woman with claims against Kavanaugh.