Builder Mujahid Arshid, 33, claimed to a jury he had consensual sex with both women but left them to it and phoned his mother when they began rowing over him in July last year

The man accused of the rape and murder of a young woman has alleged she was killed by a possessive rival who went ‘crazy’ after catching them having sex.

Builder Mujahid Arshid, 33, claimed to a jury he had consensual sex with both women but left them to it and phoned his mother when they began rowing over him on July 19 last year.

He returned to find his niece Celine Dookhran, 20, dead in the bathroom of the house he was renovating and the other woman with ‘blood on her hands’, he said.

Arshid is on trial for the kidnap, rape and murder of Ms Dookhran, and the attempted murder of the surviving woman, who cannot be identified for legal reasons.

Ms Dookhran’s body was found in a freezer at the house after the second alleged victim was taken to hospital with cuts to her wrists and neck, the Old Bailey has heard.

Arshid, who denies the charges against him, told jurors how he had sex with the unidentified woman twice before July last year, including one time in his car.

He said he had invited both women to spend the day with him on learning Ms Dookhran planned to run away following a family dispute.

Arshid said he took them in his pick-up truck to the six-bedroom renovation project in Kingston, south-west London.

He told jurors he had had sex with the unidentified woman, after which Ms Dookhran, who had been in the kitchen, said she was tired and went upstairs.

He said he carried on with his work before coming across his niece sobbing that her ‘whole family hate her’.

He told jurors he tried to reassure her, saying: ‘I was comforting the girl, innit’, and that they then had sex.

Judith Khan QC, defending, asked: ‘What happened once you have slept together?’

Arshid said: ‘[The other woman] burst in and she’s going crazy. I cannot tell you how angry she was. 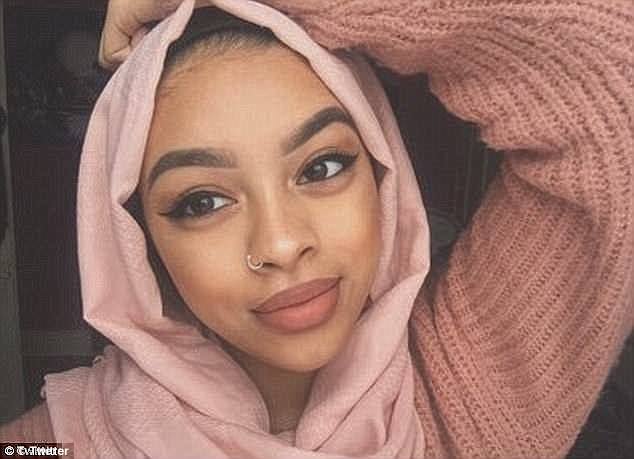 Arshid returned to find his niece Celine Dookhran (pictured), 20, dead in the bathroom of the house he was renovating and the other woman with ‘blood on her hands’, he said

‘[She] is incredibly possessive and she obviously heard what was going on upstairs, and she came in screaming at me. She punched me in the chest. She shouted at me. Celine started crying.

‘I don’t deal very well with women shouting both sides at me. I tried to calm the situation down. She were having none of it.’

Arshid said he ‘left them to it’ and called his mother before returning after about 20 minutes.

Describing the scene, he said: ‘As I got to the top of the stairs I looked across. I saw [the woman] standing there, knife in hand, blood on her hands.

‘I went running in. I see Celine in the bath. There’s so much blood everywhere, I cannot see what’s what. It was obvious she was gone, so I closed her eyes.’

Arshid allegedly screamed at the other woman and demanded to know what she had done, adding: ‘It was so weird, my mind is all over the place. I said “get out of my sight”.’

Arshid told the court that the allegation he kidnapped the girls was ‘complete lies’.

He told how Celine started crying on the morning of 19 July and asked him to let her leave the house following a fraught family meeting the previous day.

The surviving victim then suggested they ‘go somewhere and get away from this’, he claimed.

‘I was never ever going to run away with anyone I just wanted them to calm down and have time to think.’

Arshid told how he drove them to the house in Kingston in his truck and gave them a tour of the ‘beautiful’ building. 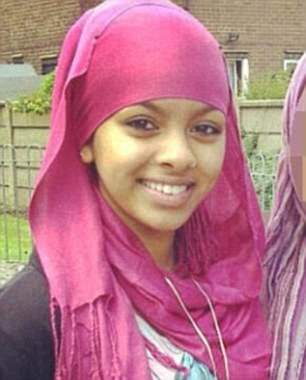 Arshid claimed that the second woman tipped Celine Dookhran’s body into the freezer and told him: ‘She tried to take what was mine so that’s what you get.’

He said the other woman then attacked him with the knife when he told her they had to tell his wife.

‘She comes running towards me with it, I go to grab her hand. We were wrestling with it. I pulled it out of her hand and she’s coming at me,’ he said.

‘There is no way I’m willing to be her next victim so I’m fighting for my life with this girl.

He told how he put tissue and clingfilm on her wounds before they went out to the car where they met Arshid’s brother.

He admitted making an internet search for the acid bath murderer John George Haigh but claimed he was part of a plan to sell drain cleaner with the brand name ‘Haigh it’s gone’.

Arshid said: ‘My next product I was going to start selling drain cleaner, sulphuric acid.

‘I was going to recreate and repackage and sell it, it was meant to be an ironic joke at the time.

‘I was going to call it Haigh it’s gone. You have barbershops called Sweeney Todd and hairdressers called Curl up and Dye. I was trying to be funny with words.’

The defendant was later arrested at a hotel in Folkestone in Kent, the court heard.

Arshid, formerly of south-west London, denies murder, attempted murder, rape of both women and the previous sexual assault and assault by penetration of the surviving woman when she was about 13.

He is on trial with labourer Vincent Tappu, 28, from Acton, west London, who is accused of helping him abduct the woman. He also denies wrongdoing.