Three Florida cops are suspended after shocking cellphone footage showed them beating, kicking and tasering a suspect at a traffic stop

By Dave Rudge For Mailonline

This is the shocking moment a suspect is beaten with a baton, kicked and repeatedly shocked with a Taser by cops during a traffic stop.

Christopher Butler, 30, was pulled over after reportedly being seen driving 15mph and swerving on Interstate 95 in St. Johns County, Florida, at around 1.15am on December 29. 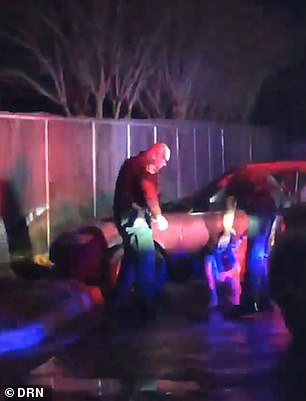 Video released by Butler’s attorney shows a bald-headed officer kicking the suspect as he lies slumped against the side of a vehicle. After ordering him to ‘get on the ground’, another officer hits the suspect with a Taser and he screams in pain

Butler – who was reportedly badly injured – was charged with battery on a law enforcement officer, resisting an officer and probation violation. He was also charged with DUI and remains in jail without bond.

According to the arrest report, he kicked and punched officers and bit one deputy on the arm. A trooper then used a Taser on Butler, who fell to the ground but was said to be ‘not fazed’ by the shock. Police also claimed a hospital evaluation showed he was under the influence of PCP at the time of his arrest, News4Jax reports.

But the suspect’s lawyer claimed he was suffering from a ‘severe medical condition’.

Video released by Butler’s attorney shows a bald-headed officer kicking the suspect as he lies slumped against the side of a vehicle.

After ordering him to ‘get on the ground’, another officer hits the suspect with a Taser and he screams in pain.

As he hunches over on the floor, the officers warn him to put his hands behind his back or he will get the Taser again.

The bald officer then fetches a baton and strikes Butler with it four times while a colleague holds him down. 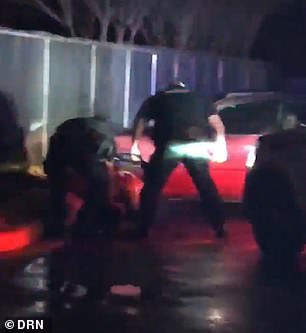 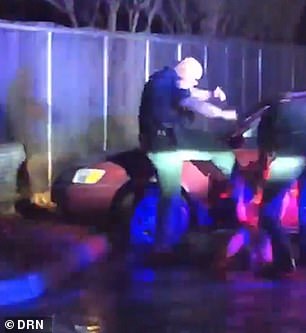 The witness filming it accuses the officers of ‘police brutality’ and urges them to ‘just cuff him’. Butler is hit again with a Taser by a third officer and falls forward on the concrete before the video cuts out.

St. Johns County Sheriff’s Office said it was not aware of the footage until a complaint was made by Butler’s family.

‘And of course they have no law enforcement powers pending the outcome of that case.’

According to the arrest report, Anthony Deleo, Joseph McGinnis and Patrick Ponticello were the deputies involved in the incident. A trooper who pulled Butler over and used his Taser on him was not disciplined.

In a statement John M. Phillips, representing Butler, said: ‘Our client was savagely beaten by police officers for ‘not cooperating’ while he was experiencing a severe medical condition. ‘They then defamed him and mistreated him and he still can’t get the medical attention he needs.’

Butler’s mother Teri Morgenstern told News4Jax her son was taking medication for a cold at the time and was not on any illegal drugs. She said: ‘They beat him like he was nothing. Like he wasn’t a human being.’