Nothing is guaranteed. Least of all when it comes to a Celtic team who seem intent on hitting the gamble button regardless of scoreline or circumstances.

But Ange Postecoglou’s free-wheeling entertainers will head to the nation that gave the world Total Football confident in their ability to complete their Europa League mission. In a style entirely befitting the setting, if Wednesday night is anything to go by.

They travel to Holland in possession of a 2-0 lead over AZ Alkmaar, a team who must be wondering what hit them. And possibly feeling a little baffled that they didn’t manage to land at least one blow on their assailants. 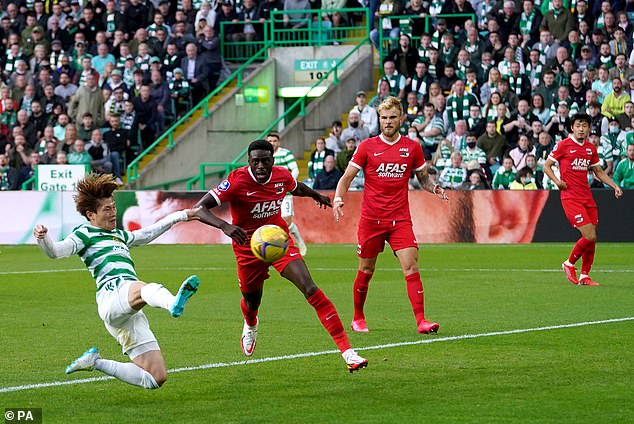 The Dutch may point to a string of chances to punish Celtic for their high-risk approach.

When it came to carving out opportunities, though, they played a poor second fiddle to their hosts. And their inability to hit the net is likely to cost them dear.

Kyogo Furuhashi’s goal after just 11 minutes, his sixth in his opening half-dozen games for Celtic, and a deflected James Forrest effort just after the hour-mark did the damage on the night.

But there was so much more to this game than just a couple of finishes separating two decent teams. As anyone in attendance would testify.

With just over 20 minutes remaining and their team 2-0 up, the Celtic fans here briefly indulged in the ever-popular ‘Poznan’ chant that involves everyone turning their back on play.

Only briefly, though. Because very few in attendance could tear their attention away from such madcap entertainment – a feat akin to refusing the urge to chew on a fruit pastille. Impossible. 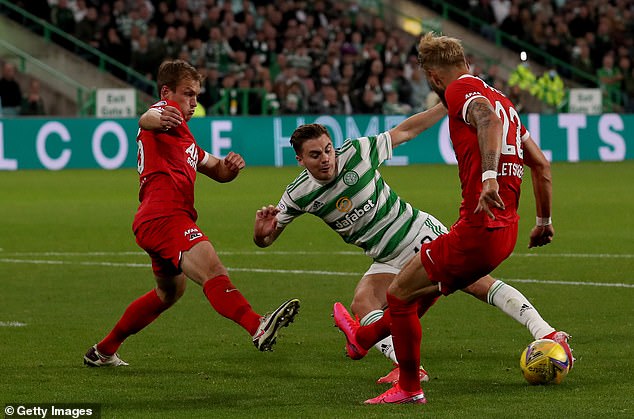 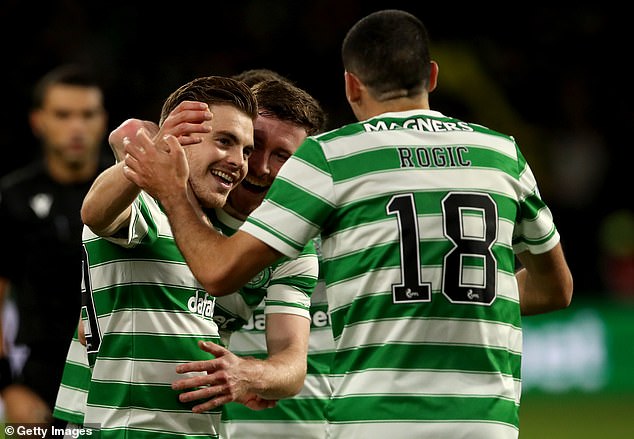 Man of the match: Kyogo Furuhashi.

From first minute til last, this was a breathless, thrilling, tense and terrific bit of entertainment.

We’ve all learned by now that this Celtic team can only exist on the very edge of the dividing line between triumph and disaster; Postecoglou makes a virtue out of his refusal to playing the percentages.

As hard as that might be on the nerves of supporters, they’re surely growing accustomed to the risk-and-reward approach that saw AZ come perilously close to taking the lead twice within the opening five minutes.

First the energetic and athletic Zakaria Aboukhlal just seemed to run out of steam at the end of a lighting counter-attack, stumbling over in the box with recovering defenders making their presence felt.

Moments later, Joe Hart got maybe a couple of toes – or half a long stud – on the ball to deny Evangelos Pavlidis from a position straight in front of goal.

Set up by another Aboukhlal break and a perfect cross from Dani de Wit, Pavlidis looked on in disbelief as his low shot was diverted on to the post and then across the goal line.

This was already shaping up to be a shoot-out. With Celtic guaranteed not to be found wanting when it came to taking a pop.

Put a sublime chance creator like Tom Rogic and a clever striker like the perpetually-in-motion Furuhashi on the same park and, well, things are going to happen. 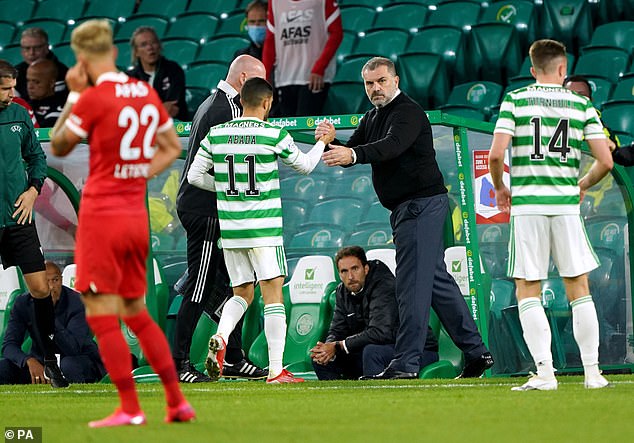 Just moments before they combined for the opening goal, a Rogic through ball forced Timo Letschert to make a timely intervention to prevent the new fans’ favourite from getting a shot away.

Unlucky once, the pair were determined to keep trying. And so produced a delicious opener.

Rogic casually playing keepy-up before spinning, rolling and driving to the bye line on the left flank was impressive enough.

Furuhashi then darting into the only place Rogic would look to send his delivery, getting the jump on the AZ back four and arriving just in time to send a volley into the roof of the net, was a moment of quality befitting almost any stage.

For a spell just after the goal, Australian playmaker Rogic was in his absolute pomp, finding all sorts of angles – and inventing a few not on the compass – from which to bisect the visiting defence. 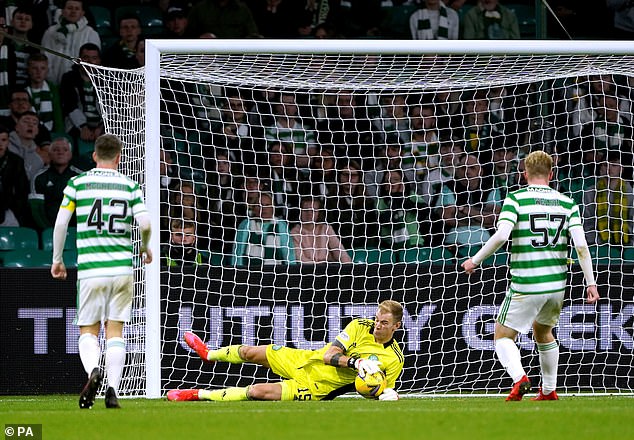 Both Rogic and the lively Liel Abada had shots spilled by AZ keeper Hobie Verhulst, who did well just to prevent both efforts from finding the back of the net.

Verhulst also pulled off a spectacular one-handed stop from Forrest, who had cut in from this starting position out left to send a right-footed effort curling towards the far top corner.

This was breathless stuff. And, with AZ still looking more than capable on the break, it was tempting to suggest that Celtic should have handed out tranquillisers to supporters upon entry.

Never mind questions over how long these players might maintain this up-tempo approach to games. There are fans who won’t make it to October without a rest.

Having gone in without a goal to show for their considerable first-half efforts, Alkmaar emerged looking doubly determined after the break. 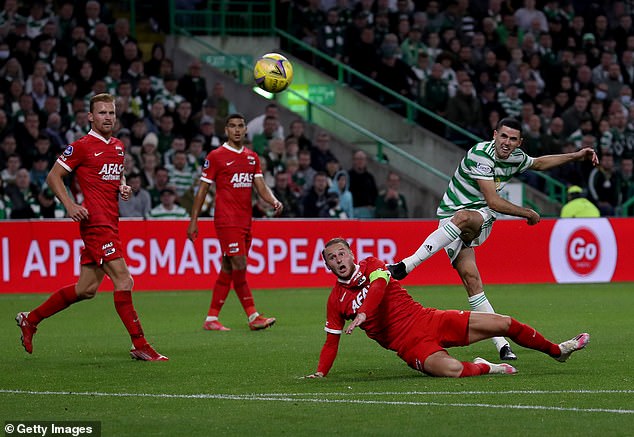 Celtic were constantly having to cope with quick counter-attacks and probing through balls.

Had right-back Thijs Oosting hit the target instead of blazing over the bar, or Aboukhlal’s shot not been deflected into the side-netting, the visitors would have argued that they deserved to be on level terms.

But they didn’t find a finish to go with all their best intents. And Postecoglou, obviously concerned by his team giving up chances, decided to make the inevitable change.

What? You expected him to throw on a holding midfielder to take the sting out of the game?

No chance. Off came winger Abada. And on went Odsonne Edouard, with Furuhashi moving to the left in order to make room for another striker. 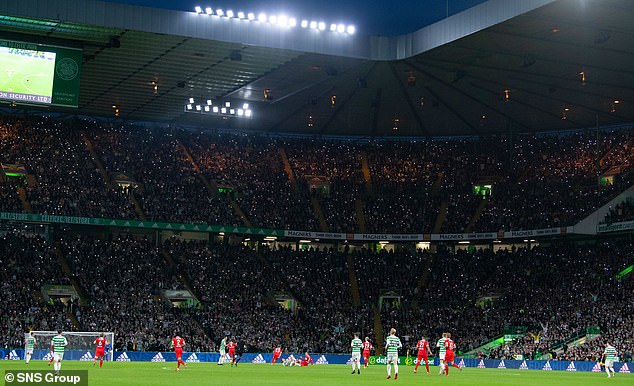 Big Ange’s doubling down paid off almost immediately, as the change of attacking focus set AZ back on their heels – and created the room for a second goal.

Furuhashi will be credited with the assist for a ball through the legs of a defender and into the feet of Forrest, who pinned his defender on the six-yard line before spinning and letting rip with a left-footed shot that took a wicked deflection off Letschert to spin beyond Verhulst.

AZ continued to chase the game, of course, knowing that even a single goal might give them just enough to build on next week,

Yet both Edouard and young Adam Montgomery saw efforts cleared off the line in a desperate late scramble.

Right until the final minute of the five added on by referee Ovidiu Hategan, there was the potential for more. More goals, more thrills, more mayhem. At both ends.

Don’t miss the second leg. It could be an absolute scream.