The captaincy of a club like Celtic is not something to be shouldered lightly. There’s a weight of responsibility that comes with the armband.

But what about taking on those extra duties in a season predicted to be all about painful transition, under a new and unfamiliar manager in charge of an ever-changing squad?

There’s a reason why Callum McGregor spoke to his family before agreeing to become skipper of the club he first joined as an eight-year-old.

Revelling in the joy of his first trophy in his new role, the Scotland midfielder did not pretend it has all been plain sailing to this point.

Asked to help pull together a group given little to no chance of shaking off the horrors of last season – while getting to know exactly what Ange Postecoglou was made of – it would have been understandable if he was initially reluctant to step into the void left by Scott Brown’s departure.

‘I spoke about it in the summer with my family,’ said McGregor, ‘It’s a great honour being captain. But then you have huge responsibility as well.

‘The responsibility comes around with games like this; semi-finals, finals, big games. You have to win. You’re responsible. I’m just super happy and super proud to get the first trophy in the bag. It’s obviously an amazing feeling.

‘I tried to play it down before the game but the reality is it’s the first one (as captain). To get there at the first time of asking as well, I think that helps, it shows people what you’re made of.

‘This group of players, we were put together in the summer and probably not many people gave us a chance – but we’ve gone and won the trophy at the first time of asking.

‘That should give us massive belief now to go on and keep on showing we’re on the right track.

‘If we keep working hard, keep staying humble, keep doing what the manager wants us to do, then there’s a real platform for success for this team.’ 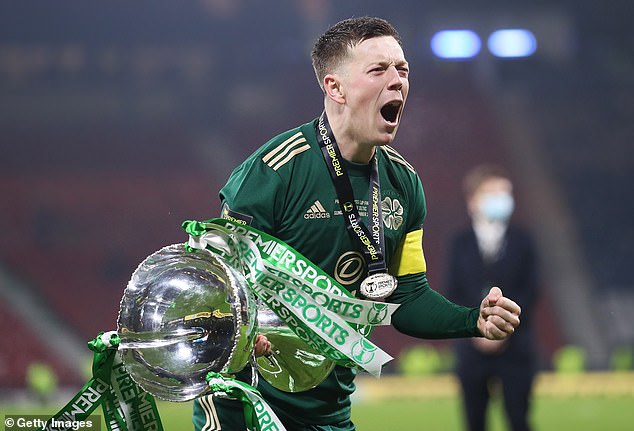 McGregor was outstanding in a game that took long enough to spark into life, his pass for Kyogo Furuhashi’s equaliser – 40 seconds after Hibs had taken the lead – typical of the quality he brings to the team.

But it’s the soft skills he exerts as captain, the behind-the-scenes work at Lennoxtown, that matter as much to Celtic.

Expanding on the aspects of the job he needed to focus on, McGregor said: ‘There were so many new guys coming into the club, different cultures, different age groups as well.

‘Obviously the manager coming in from the other end of the world, too. He had to adapt.

‘But I spoke about this pre-season, you don’t get time to adapt at Celtic. You have to win at Celtic.

‘So, it was a case of us going on and proving it. From the start of the season until now, it’s been a brilliant journey – but hopefully it’s just the start for this group.

‘You can’t just turn up and play great football. Obviously, you want to do that. But there are always going to be times within the season, certain games, when you have to grind it out a little bit.

‘And that showed again the mentality of the group, you go one behind in your first final as a group. But then from kick off we go on and score. That sums us up a little bit.’ 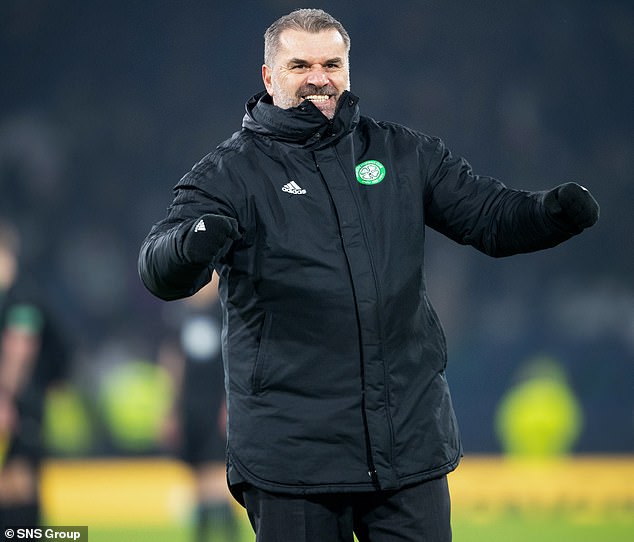 Citing the sheer joy on the face of Furuhashi at full-time, McGregor said: ‘That’s what it means to them.

‘You have to have good types in your team, good characters that want to win, who will go that extra mile for their team-mate. To bring in so many new players and actually have that in their make up.

‘We’ve got a little bit lucky but, at the same time, that’s because of the environment we’re creating at Lennoxtown, the standards we’re setting, the behaviours, the way we respect each other.

‘Then it’s also coming down from the manager. For him to come in and win a trophy at the first time of asking is absolutely outstanding. I’m absolutely delighted for him, too.

‘I said to the boys in there, nobody gave us a chance at the start of the season.

‘And for us to get to to where we were – even getting into the final – was a great moment.

‘But Celtic players have to win things and that’s we’ve done.

‘We managed to get it over the line and with a bit of style in the end, two great goals and the way we want to play.

‘Quick restarts, getting the ball moving, playing through the thirds, get in and be aggressive on goal.’

A first trophy is a big achievement for any Celtic manager. Winning the Premier Sports Cup at the first opportunity will undoubtedly help Postecoglou’s standing among supporters.

McGregor, who sees exactly what the Australian brings to training every day, said: ‘Obviously his football ideas are top.

‘It’s really good, the information is super clear, his coaching methods are excellent as well. And considering different cultures, too, it’s big credit to him.

‘But probably being in Japan also has helped him, with different players. He makes it super easy, super clear.

‘Then again, he’s got that desire to him that you don’t want to mess him about.

‘He’s got that stern side as well, he gives you the look and the standard in training goes right through the roof again.

‘So, he’s got that side as well, which you need in professional football.

‘To get the first trophy, it comes early in the season. So if you can put yourself in a position to get it in the bag then it gives you the confidence – it should give you confidence – to go on and progress.

‘It’s still fairly early on in our development as a group, as a team. But we should take big confidence that we can come and perform on a big day and handle the pressure.

‘So here’s hoping it can provide a real springboard for us.’