Celtic football club chief executive Peter Lawwell’s home has been left partially gutted in a suspected petrol bomb attack while he and his family slept inside.

Peter Lawwell, 61, and his family were sleeping inside the home at the time of the fire and were forced to flee to safety when the blaze took hold.

His daughter and four month old baby granddaughter were also caught up in the incident.

Their annexe flat is understood to be above the garage alongside the house which pictures from the scene this morning show is now in charred ruins.

No one was injured in the blaze but all have been left ‘extremely shaken and shocked’.

The fire took hold of the two-storey property on the south side of Glasgow around 1am this morning and is understood to have been sparked by a petrol bomb.

Thugs were undertood to have initially thrown the petrol bomb or similar device, which is said to have contained an ‘accelerant’, at the Parkhead power broker’s car as it sat in the driveway.

The fire, which started in the early hours of Wednesday morning and caused ‘significant damage’ to the south Glasgow home (pictured), is understood to have been sparked by a petrol bomb 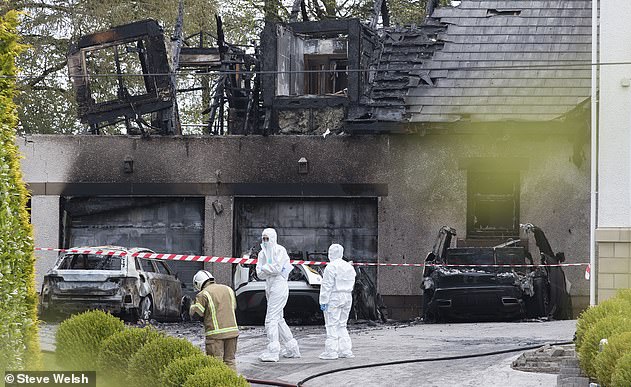 But the flames spread to the house when the car ‘exploded’ outside the home in south Glasgow, Lanarkshire, an area where the average house price is in excess of £2million.

One resident who lives nearby reported hearing ‘loud bangs’ during the night, whike another described the sound as like ‘fire crackers’.

They told The Scottish Sun: ‘We didn’t know what had happened until we came down this morning and there were emergency services everywhere.

‘It’s terrifying to think what could have happened.’ 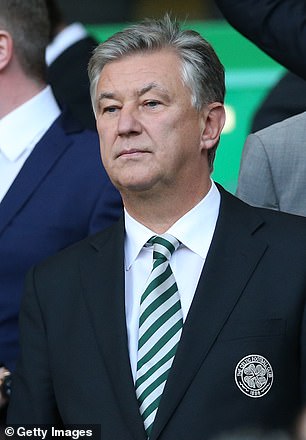 Another witness told The Daily Record: ‘I woke up and there was police everywhere and lots of blue flashing lights.

‘That was around 2.30 and there was a huge emergency response.

‘I think there was a baby inside that house.’

Police and up to eight fire engines carrying 40 firefighters attended the scene as part of the ‘major response’.

Firefighters extinguished the blaze but some remained at the scene at 7am and police road closures were still in place at that time.

The force confirmed they have launched a joint invesigation with the Scottish Fire and Rescue Service to determine the cause of the blaze, which caused ‘significant damage’ to the house.

Multiple vehicles and the garages are also understood to have been destroyed by the fire.

Mr Lawwell and his family were taken to a safe location after the horrific attack, but Police Scotland refused to reveal any details over whether they were being given any protection following the ‘terrible’ incident.

A spokesperson for the Scottish football team said Mr Lawwell and his family were uninjured but had been left ‘extremely shaken and shocked’.

Celtic have endured a torrid season on the field, seeing their bid for an unprecedented 10th Scottish title in a row failing, with hated rivals Rangers winning the SPL. They also exited the Champions league and domestic cups early on.

The Celtic spokesperson said: ‘We can confirm that significant damage has been caused to Peter Lawwell’s house and vehicles there, following an explosion and fire early this morning, forcing the family to leave the property.’

‘Clearly, Peter’s family are extremely shaken and shocked by these terrible events, but thankfully all are safe’ 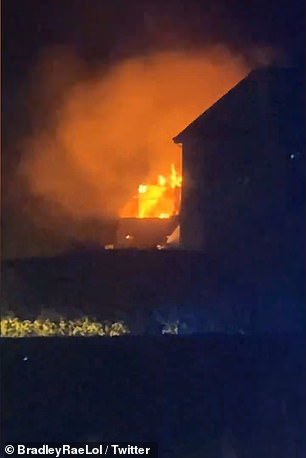 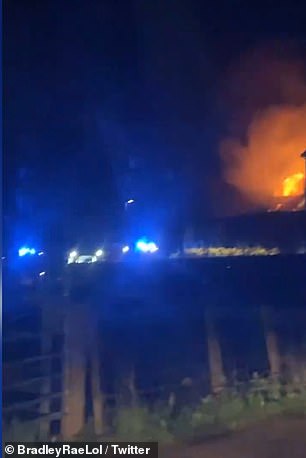 An onlooker filmed the fire after driving past, caputring the moment emergency services battled the blaze as it gripped a roof 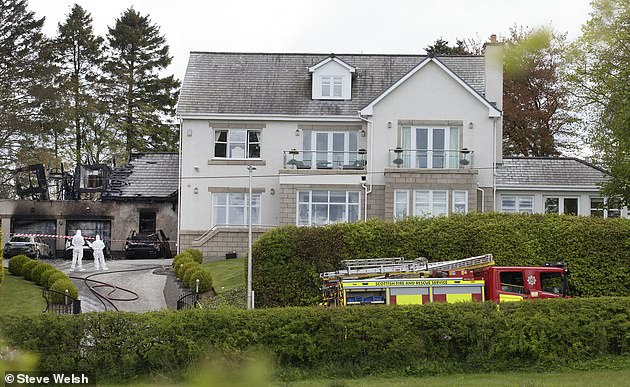 Police Scotland confirmed they have launched a joint invesigation with the Scottish Fire and Rescue Service to determine the cause of the blaze, which caused ‘significant damage’ to the house 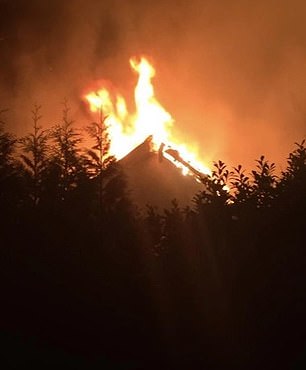 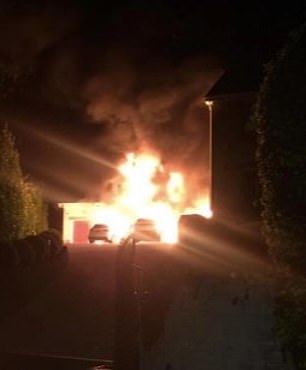 ‘We understand that Police Scotland are currently undertaking a criminal investigation.’

‘Peter and his family will of course receive the full support and care of everyone at the Club.’

A Police Scotland spokesperson told Mail Online: ‘Around 1am on Wednesday, 19 May, officers were called to a report of vehicles on fire outside a house [in south Glasgow]. ‘No one was injured and officers are currently working with the Scottish Fire and Rescue Service to establish the cause of the fire.’

The Scottish Fire and Rescue Service also told The Daily Record: ‘We were alerted at 1.02am on Wednesday, May 19 to reports of a car on fire outside a dwelling [in south] Glasgow.

Scottish Fire and Rescue Service said: ‘We were alerted at 1.02am on Wednesday, May 19 to reports of a car on fire outside a dwelling in [south] Glasgow.

‘Operations Control mobilised eight appliances to the scene to extinguish the fire, which was affecting a number of cars as well as the detached two-storey property.’ 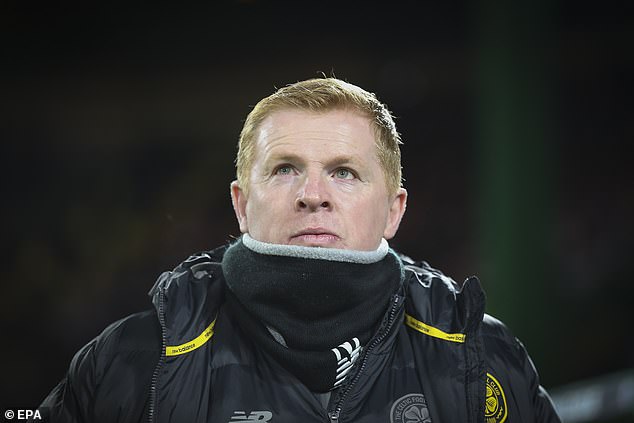 Former Celtic FC manager Neil Lennon (pictured) was also violently  threatened during his tenure at the club, with bullets sent to him in the post 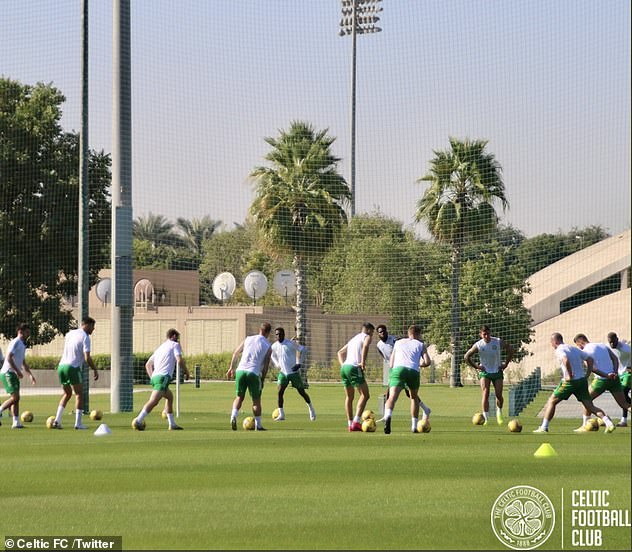 It is not the first time a Celtic FC figure has been targeted – although it is not clear if the attack is linked to Mr Lawwell’s football connections in any way.

In 2011 bullets were sent to him  at Celtic’s stadium address, while primed explosive devices intended for Mr Lennon were also intercepted.

His home was eventually placed  under 24-hour guard following the violent threats.

Mr Lawwell was first employed by Celtic as the club’s Financial Controller in the early 1990s. He later because Chief Executive in 2003.

Earlier this year he was forced to publicly apologise to Celtic fans after Celtic ignored rising Covid cases both here and in the Middle East and flew out to Dubai in late December for a training camp.

Poolside pictures of players and staff drinking alcohol infuriated supporters who were enduring a second lockdown back home.

The scandal prompted First Minister Nicola Sturgeon to question if the club were abusing their elite athlete exemption.

When one player tested positive for the virus on the team’s return, 13 players and three staff – including manager Neil Lennon and his assistant John Kennedy – were all forced to self-isolate.

Mr Lawwell expressed his regret that the trip had gone ahead and issued a grovelling apology to fans, saying he ‘clearly [realised] it was a mistake’ and for that he profoundly apologised’ to the club’s supporters.

He is set to end his 17 years at Celtic this summer as he retires at the end of June.

He will be replaced by Dominic McKay, who has already moved from Scottish Rugby to take up the post.