Hoops striker Leigh Griffiths, back in the side at the expense of Odsonne Edouard after coming off the bench to score the winner in the 1-0 Europa League win over Rosenborg on Thursday night, headed the visitors in front after 33 minutes after Killie failed to clear their lines.

Brendan Rodgers’ side looked to have control of the game but Kilmarnock’s 34-year-old winger Chris Burke levelled in the 64th minute with a long-range drive and right at the death his corner was headed in by Findlay to stun the champions. 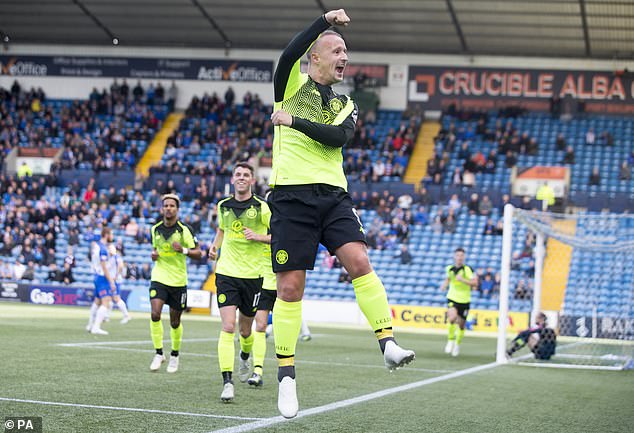 Leigh Griffiths opened the scoring for Celtic, and they looked in control for an hour of the game 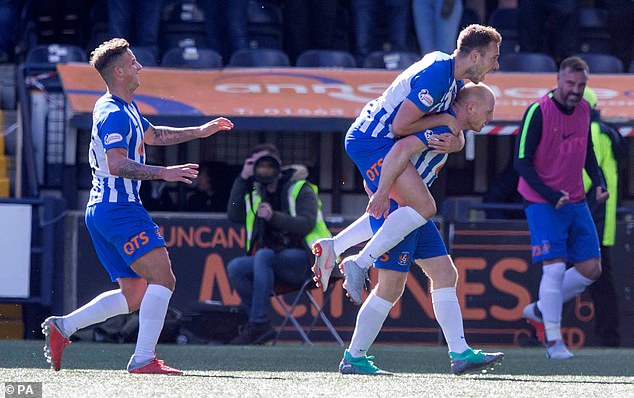 However Chris Burke equalised for Kilmarnock, and Findlay scored the winner at the death

Steve Clarke’s men had drawn twice and beaten Celtic once last season and are now unbeaten in four matches, an unusually good record in Scotland.

Rodgers had rejigged his side from Thursday night and midfielder Youssouf Mulumbu, whose goal for Killie was enough to beat Celtic last season, made his Hoops debut.

Ryan Christie and Mikey Johnston made their first league starts of the season while Scott Sinclair and Griffiths were back in the side, which had to be changed to include defender Jack Hendry when Filip Benkovic was injured in the warm-up.

Amid an encouraging start by the home side, Killie fans were looking for a red card when Celtic stopper Dedryck Boyata tripped Jordan Jones in the fourth minute as he broke through the Hoops defence.

However, referee Craig Thomson, who had controversially sent off Aberdeen’s Michael Devlin for a ‘last man’ foul on Killie attacker Eamonn Brophy at Pittodrie, was happy with a yellow this time. 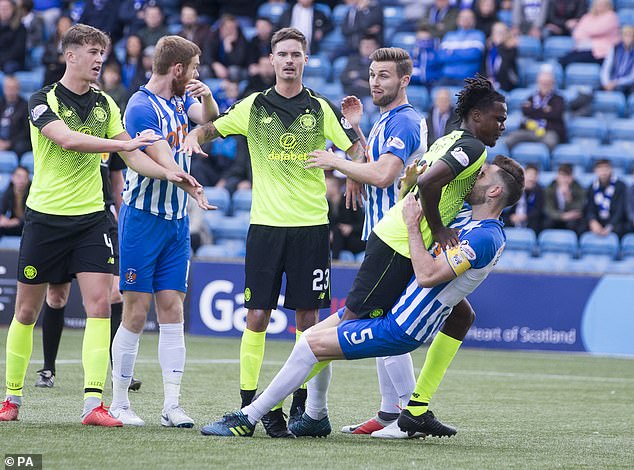 There were plenty of incidents, and Kilmarnock wanted Dedryck Boyata sent off early on 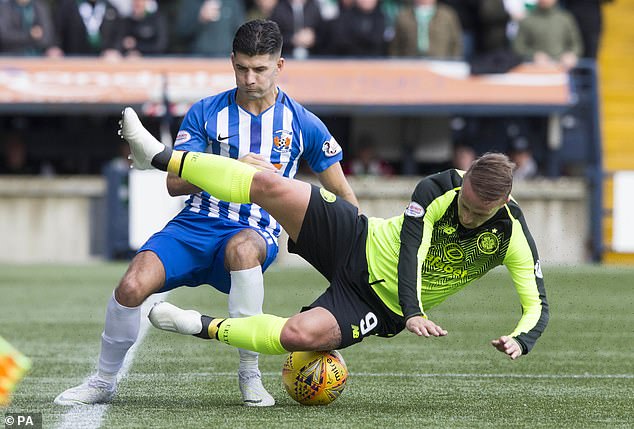 Kilmarnock have now extended their unbeaten run to four games, quite a rarity in Scotland

In the 15th minute Boyata failed to connect properly with a Griffiths corner with the Scotland striker then having a free-kick pushed past the post by Killie goalkeeper Jamie MacDonald.

The Ayrshire men survived again from the corner which provoked Celtic calls for a penalty as defender Kirk Broadfoot wrestled with Boyata who hit the deck.

The home side had themselves to blame when they fell behind.

From a Kieran Tierney cross from the left, Broadfoot mis-kicked then left-back Greg Taylor fired an attempted clearance off his own post, with Griffiths diving to head the rebound past MacDonald.

It was a calamitous goal to concede but moments later MacDonald prevented a second when he saved Boyata’s close-range shot from a Griffiths corner.

The visitors started the second half as strongly as they had finished the first and Killie looked far less potent until former Rangers winger Burke took a pass from Alan Power and fired a drive from 25 yards low past Craig Gordon and in off the post for his first goal in 11 months.

Celtic fought back immediately and only a fine save from MacDonald stopped Christie’s drive from 16 yards speeding in at the far post.

The visitors dominated the rest of the match until the final seconds of three added minutes when former Celtic youth player Findlay planted his head on a Burke corner and the ball sped in at the far post for a remarkable Killie victory.