Kieran Tierney was already in full party mode when his pal Andy Robertson clinched a Champions League spot in midweek.

Surrounded by his Celtic team-mates as they celebrated their Premiership title win on a short break to Tenerife, Tierney felt jubilant as his Scotland team-mate helped Liverpool win their dramatic semi-final against Roma to set up a dream date with Real Madrid.

Let off the leash by Brendan Rodgers after securing a seventh successive title, it’s doubtful any of the Celtic players would have been paying particularly close attention to any tactical quirks deployed by Jurgen Klopp against the Italians in Rome.

Tierney, however, has become something of a student of the way Robertson plays.

The two may both be left-backs and ostensible rivals for a place in Alex McLeish’s team but the 24-year-old Robertson plays with more dash than his younger, meatier, equivalent.

Still only 20, Tierney’s consistent excellence has earned him the Scottish Football Writers’ Association’s Young Player of the Year award for the third year in a row. One day he may wish to emulate the heights scaled by Robertson since he made his transfer from Hull City to Anfield last year but, for now, he is simply delighted to watch and learn from a player who has risen from part-time football with Queen’s Park to the very summit of the club game in the space of five years.

‘We all went out to watch the game and it was brilliant to see Andy get to the final,’ said Tierney. ‘From where he’s come from, it’s just such a great story. He deserves everything he’s getting at the moment.

‘He is playing for one of the biggest clubs on the biggest stage there is and doing so well. I’ve been sending him messages throughout Liverpool’s run but I’ve no doubt his phone was going off its nut after Wednesday night, so I’ll catch up with him soon.

‘I look at Andy and I see an opportunity to learn. We both play the same position but he does things that I can be better at and so it’s great to train with him when we meet up with Scotland.

‘I don’t get jealous of him. For a start I just feel happy for him. And also I’m only 20. He is a few years older than me, so he has that extra experience.

‘He’s playing at a level I have not reached but I have had some great experiences here at Celtic, too.

‘Playing in the Champions League group stages has brought my game on and hopefully we can get there again next season.’ While Robertson has a career-defining night to look forward to in Kiev at the end of the month, Tierney is hoping to add to his own burgeoning medal haul by helping Celtic complete a second Treble in a row under Rodgers. 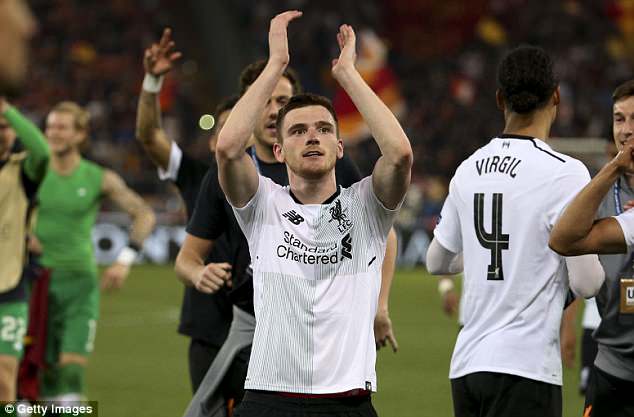 Although one of Celtic’s stand-out performers over the campaign – not least through his rampaging turn against Rangers in the game that clinched the title last weekend – he admits there have been points where the physical demands of his schedule have taken a toll.

Should he start against Hearts at Tynecastle on Sunday it will be his 58th appearance of the season for club and country. Come the Scottish Cup final against Motherwell later this month his tally could go as high as 61.

In the circumstances, a trip to Peru and Mexico for friendlies against teams gearing up for a summer of World Cup football would leave the defender little scope to recover in time for Celtic’s Champions League qualifiers, which will begin in mid-July.

‘We all want to play in the Champions League again next season but it’s such a hard thing to do and this year it’s going to be tougher with an extra round of games,’ says Tierney.

‘It takes a lot out of you. It’s a really tough schedule, there’s a lot of travelling and there is no room for mistakes.

‘But we need to deal with it.’ Not that Tierney will be asking to be excused from international duty. If McLeish insists on taking him to Central and South America he will travel but with the national team reliant on so many Celtic players and the likes of Craig Gordon, Stuart Armstrong and Leigh Griffiths hungry for games, it’s likely a settlement that would rest Tierney be reached.

‘I’m not sure what will happen,’ he admits. ‘It’s been the most intense season yet for me and my body. I’ve played 50-odd games and, at 20, that’s not an easy thing to do. But if I’m picked for Scotland I would always want to play. It’s not my call and it’s not for me to say what should happen. 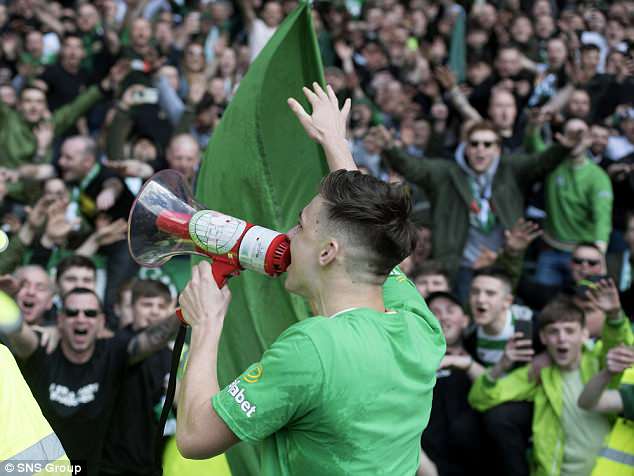 ‘It will be the Scotland manager’s decision and I’m sure he will speak to our gaffer, too.’ Having enjoyed a few days of sun, the Celtic players were back training at Lennoxtown on Saturday with one clear goal in mind.

‘The Treble has never been done twice in a row because it’s so hard to remain so consistent over two years,’ he says. ‘We are in a great position but there’s still a few league games to play before the final.

‘We’re at Tynecastle this weekend and they will be up for that after beating us there last time. We don’t want to take our foot off the gas because we will want momentum going into the cup final.’ One of the enduring images of Celtic’s title-winning last weekend was that of Tierney bellowing into a loudhailer as the supporters bounced around behind him.

‘That was good fun,’ he laughs. ‘It was a dream for every Celtic fan to win the league in style against our rivals.

‘I did the same thing (with the loudhailer) last year. Everybody crouches down, I’ll make that noise and then they all jump around like mad. It’s great.

‘A few of my pals are in there and it was good to join them at the end of the game. It was one of the best days of my life, to be honest.

‘I think the fans appreciate the fact that I am just a normal Celtic fan. If I wasn’t on the pitch I would be sitting with them and it’s been good for them to see someone like that out there and also interacting with them.’ In common with Robertson, roots are important to Tierney. Scotland is lucky to have the pair of them.