A madman uttered the words ‘I’m going to kill you c**t’ after brutally assaulting a police woman, leaving her with an enormous gash in her forehead.

Blake Maxwell Sanders, 30, from Halekulani on the Central Coast, fronted Wyong Local Court via video link on Tuesday over the brutal assault of a police officer last year.

An agreed statement of facts reports a resident on Walu Ave woke to the sound of a male screaming on the street at 3.15am on Tuesday, July 14, 2020, according to The Daily Telegraph.

Police initially attended the scene at 4.56am after concerned neighbours reported Mr Sanders was harassing homeowners.

After spotting officers, Mr Sanders reportedly walked back inside his home with police leaving when he failed to answer the door.

At 7am police responded to another call after reports were made he was eating Weet-bix and continuously knocking on a neighbours’ door. 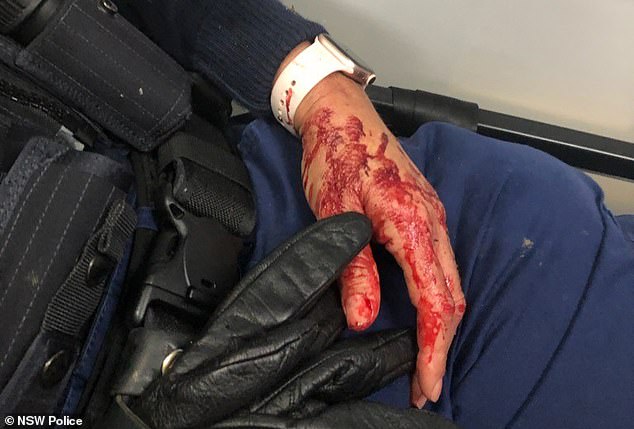 When the officers spoke to the man, he allegedly became aggressive and punched the 47-year-old woman (pictured is her bloody hand) in the head several times

When officers arrived they reported Mr Sanders ‘dancing and rapping’ outside a neighbours home.

After failing to confirm his identity the man allegedly became angry, telling them: ‘I’m going, youse are f**ked’.

When officers asked Mr Sanders to confirm his identity again he suddenly turned and lunged at the female officer.

‘He grabbed her by the back of the hair and pulled her head down, using his other hand to punch her to the right side of her head,’ the facts state.

‘The offender immediately followed this punch with a further 3-4 uppercut punches to [the senior constable’s] face while screaming ‘f**ing c**t’.’

The second punch left a 2.5cm gash on the female officer’s forehead. 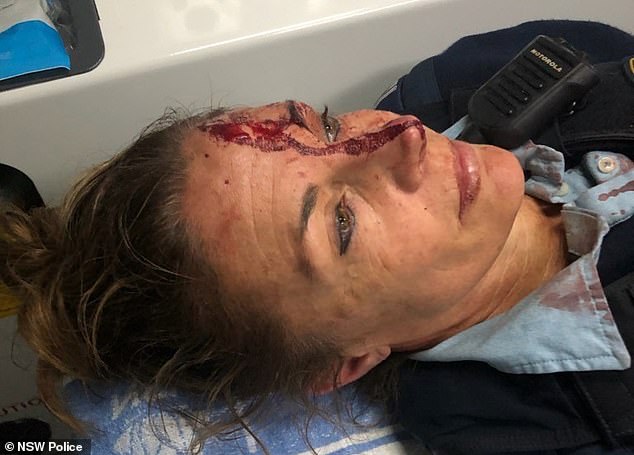 The man allegedly yelled at the police woman ‘I’m going to kill you c**t’, after the officers managed to arrest him.

Mr Sanders was allegedly covered in the female officer’s blood with his mobile phone appearing to have ‘a clump of hair on it’.

The senior constable suffered cuts to the face and was treated at the scene before being taken to Wyong Hospital for further treatment.

Medics used skin glue to close a 2.5cm cut to her forehead and treated her for bruising to her cheek and jaw along with treatment for a concussion.

She also required plastic surgery and suffered permanent nerve damage due to the laceration and scarring.

Mr Sanders plead guilty to two counts each of trespassing and intimidation and the reckless wounding of a female police officer.

He was refused bail and is due to face Gosford District Court on October 28 to set a date for sentencing.