Jide Zeitlin, chairman and CEO of Tapestry Inc., has resigned from the company after less than a year in the role, effective immediately.

Tapestry – the parent company of Coach, Kate Spade, and Stuart Weitzman – announced Zeitlin’s resignation in a Tuesday press release, saying that he had come to the decision because of unspecified ‘personal reasons’.

However, sources told the Wall Street Journal that Zeitlin departed the company after its board launched an investigation into his personal behavior.

The woman reportedly accused Zeitlin of posing as a photographer under an alias to lure her into a romantic relationship more than a decade ago.

Responding to those claims, Zeitlin said: ‘ ‘In the past month, a woman I photographed and had a relationship with more than 10 years ago reached out to various media organizations to express her concerns about what had occurred.

‘I felt compelled to resign today because I do not want to create a distraction for Tapestry, a company I care deeply about.’

Jide Zeitlin, chairman and CEO of Tapestry Inc., has resigned from the company after less than a year in the role, effective immediately

The alleged incident reportedly occurred in 2007, when the woman, a model looking for headshots, met Zeitlin on an online site where he posed as a photographer under a different name.

Zeitlin and the woman later entered into a romantic relationship, but he never disclosed his true identity to her, sources familiar with the matter said.

In 2009, Zeitlin was nominated by President Barack Obama to serve as an envoy to the United Nations for financial overhaul.

However, after being approved by the Senate Foreign Relations Committee, he withdrew his nomination citing personal reasons. The woman allegedly player a key role in stifling the nomination, the Journal said.

Announcing Zeitlin’s departure in an 8-K filing to the Securities Exchange Commission, Tapestry made no mention of the woman’s allegations or the board’s subsequent investigation.

The company simply specified that his departure wasn’t spurred by ‘any disagreement with the Company on any matter relating to the Company’s operations, financial statement or accounting.’

The company has not yet responded to a DailyMail.com request for further comment.

Zeitlin, 56, had just taken over the role of CEO in September 2019, replacing Victor Luis, and had served as Tapestry’s chairman since 2014.

In total, he had been with the New York-based company for 14 years and had been lauded as one of the few black CEO’s of a Fortune 500 company, following his appointment last year.

‘It has been a privilege to lead Tapestry with its powerful brands and outstanding people,’ Zeitlin said in a press release announcing his resignation.

‘I have incredible belief in the Company’s growth potential as each brand sharpens its focus on meeting the broad and diverse needs of their consumers,’ he continued. 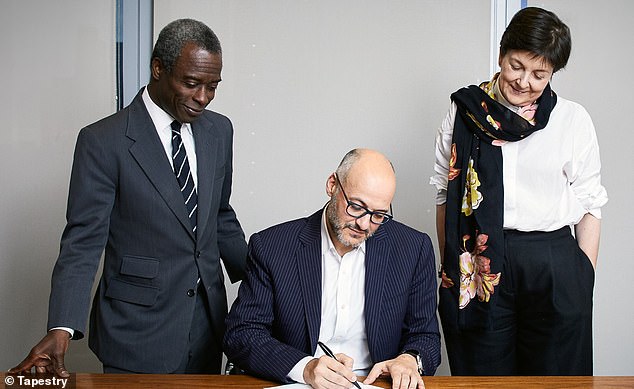 The 56-year-old (left) had just taken over the role of CEO in September 2019, replacing Victor Luis (center), and had served as Tapestry’s chairman since 2014

In the company’s press release, Kropf praised Zeitlin’s ‘meaningful contributions to Tapestry over the past 14 years, first as a director, and then as chairman, and most recently as CEO.

‘During his tenure as CEO, he played a key role in driving the development of Tapestry’s strategic growth agenda, Kropf continued.

‘Importantly, he led with purpose during these unprecedented times. We thank him for all he has done for the company and remain committed to continuing this important work.’

Tapestry announced in March that Zeitlin had reaffirmed his commitment to stay with the company for at least the next three years as it worked on restoring growth. At the time, they also announced the resignation of Joshua Schulman as Coach CEO and brand president. ‘Over the next several years, I will continue to work with our world-class teams to sharpen our focus on execution while driving our evolution to being a truly consumer-centric and data-driven organization, which will ensure we deliver on the full potential of our entire portfolio and enhance returns for all stakeholders,’ Zeitlin said at the time.

Amid renewed national conversations about race, diversity and inclusion following the deaths of George Floyd, Ahmaud Arbery and Breonna Taylor, Zeitlin was recently said to have been making inroads at the company, prior to his resignation.

‘Our team at Tapestry wants to collaborate with a number of social justice, legal, and corporate entities to develop and support longer-term plans for addressing systemic inequality, he told Footwear News last month.

‘Inequality in health, economic opportunity, public safety, and other sectors, and we’re taking the first steps along these lines. We hope to join with government, but events of this past week make it clear that we cannot wait.’

In addition to the departures of Schulman and now Zeitlin, Tapestry Inc. has seen a number of high-profile executive exits in the last few months.

In February, Tapestry named Liz Fraser CEO of Kate Spade to replace Anna Bakst, who left the company toward the end of 2019.

Eraldo Poletto also resigned as CEO and brand President of Stuart Weitzman this year. He was later replaced by Giorgio Sarne. Tapestry announced in March that Zeitlin had reaffirmed his commitment to stay with the company for at least the next three years as it worked on restoring growth. At the time, they also announced the resignation of Joshua Schulman as Coach CEO and brand president

Despite the strain the COVID-19 pandemic has placed on the retail sector, Tapestry said Tuesday that its fiscal fourth-quarter results have exceeded internal expectations ‘from a top and bottom-line perspective’.

‘Importantly, gross margin expanded on a year-over-year basis, reflecting lower promotional activity, while inventory declined from prior year. In addition, the company ended the year with a significant cash balance of approximately $1.4 billion.’

Tapestry shares are down 51 percent this year. The company has a market share cap of around $3.6 billion.

Coinciding with Zeitlin’s departure, the company announced a number of ‘interim’ changes.

Todd Kahn, president and chief administrative officer and company secretary, will take the reins as interim CEO and brand president of Coach, a role that Zeitlin had held since March.