Cervical cancer survivor has given birth after surgery

A cervical cancer survivor who thought her condition would rob her of the chance to be a mother has given birth to a healthy baby boy after having pioneering surgery.

Rachel Bainbridge, 29, from Hucknall, Nottinghamshire, was diagnosed with cervical cancer last year, and thought her hopes of having a family were gone forever.

Yet, a life-changing procedure that just removes the cervix and its surrounding tissue, while leaving the uterus intact, enabled Ms Bainbridge to become pregnant and have the same survival prospects as a patient undergoing a hysterectomy.

Ms Bainbridge said: ‘It’s very overwhelming but amazing. It’s just unbelievable really because we were so unsure if this would be able to happen this way for us.’

Jafaru Abu, a gynaecological oncology consultant at Nottingham University Hospital, who performed the procedure, said: ‘It’s brilliant that we are able to offer this procedure to young women like Rachel who are unfortunate to be diagnosed with cervical cancer at such a young age.’

Rachel Bainbridge, who thought her cervical cancer would rob her chances of being a mother, have given birth due to a pioneering surgery (pictured with husband Russel and son William) 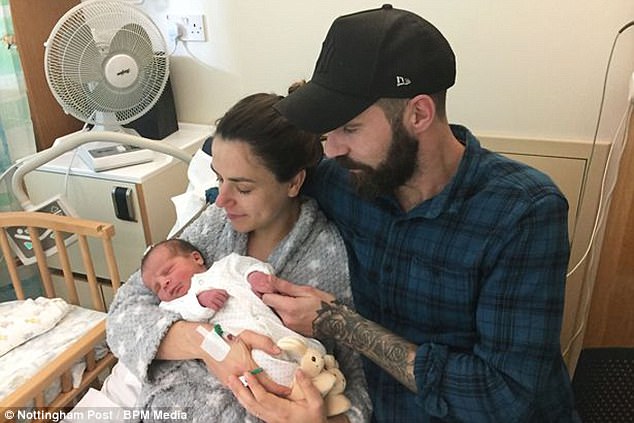 WHAT IS A TOTAL LAPAROSCOPIC RADICAL TRACHELECTOMY?

A total laparoscopic radical trachelectomy is the removal of the neck of the womb (the cervix) and some of its surrounding tissue.

It allows women to preserve their fertility if diagnosed with early-stage cervical cancer.

The operation involves four cuts in a women’s abdomen while she is under general anaesthetic.

Most women are in hospital for two to three days after the procedure.

Only women with early-stage cancer are eligible. The experience of the surgeon is also taken into account.

‘We were so unsure if this would be happen for us’

Ms Bainbridge, who welcomed son William on October 3 with her husband Russel Bainbridge, said: ‘It’s very overwhelming but amazing. It’s just unbelievable really because we were so unsure if this would be able to happen this way for us.

‘We are eternally grateful to Mr Abu and really can’t thank him enough.

‘Being diagnosed with cervical cancer, it was a shock, I was 28 years old and you never think it will happen to you.

‘You have your whole life planned out a certain way, and you’re so used to being in control, so when something like this happens you just want to know what you can do to fix it.’

After the key-hole surgery operation, women are able to conceive naturally or via IVF. The babies must then be delivered via Cesarean section.

Only women with early-stage cervical cancer are eligible for the surgery. Their survival prospects are the same as having a hysterectomy.

Mr Abu, who is one of the few surgeons in the country who can perform the operation, said: ‘I still recall vividly when Rachel was first diagnosed with cervical cancer. I had to break the news to her, her husband and the rest of her family.

‘Rachel had never had a baby, so she was obviously worried that this choice would be taken away from her by having a hysterectomy.

‘It’s brilliant that we are able to offer this procedure to young women like Rachel who are unfortunate to be diagnosed with cervical cancer at such a young age at NUH.

‘I am also happy to see that her cancer has remained in remission.’

Ms Bainbridge added: ‘Mr Abu was fantastic, he was very calm and realistic when he explained all our options. The whole surgery process was very smooth and everyone did absolutely everything they could for us.’