Leiv Bornecrantz, 72, swore and was accused of being aggressive in an unseemly exchange with the tournament director – and is now banned for allegedly breaching conduct and etiquette rules

It was not the sort of behaviour expected at a seniors bridge tournament in a genteel seaside town.

Leiv Bornecrantz, 72, swore and was accused of being aggressive in an unseemly exchange with the tournament director – and is now banned for allegedly breaching conduct and etiquette rules.

The retired businessman has been a keen player of the card game since 1962, winning tournaments in Australia where he used to live before moving to England four years ago.

The dispute centred on his convention card, a piece of paper competitors use to record their systems of play.

Mr Bornecrantz employed an Australian version and, after being told it was not ‘legal’, was asked to use an English Bridge Union card instead.

When tournament director Kathy Williams – effectively the referee – asked him to fill in the new card at the EBU event in Eastbourne, East Sussex, he said: ‘Bull****, I’m not going to do it.’

Mr Bornecrantz, who later said the rule was a form of Nazism, was then said to have stood up, ‘snatched’ the cards from her hand and walked out.

He was also alleged to have made ‘an aggressive move’ towards her, ‘possibly causing her to feel threatened’.

EBU ‘byelaws’ state ‘a player should maintain a courteous attitude at all times’.

Its disciplinary committee found Mr Bornecrantz guilty at a London hearing he decided not to attend. He was banned from EBU events for two years and fined £150.

But Mr Bornecrantz, who lives in nearby St Leonards-on-Sea with his wife Elizabeth, is furious and plans a counter claim against the EBU for £370 in costs.

Central to Mr Bornecrantz’s case is that he has been diagnosed as autistic. He informed the EBU of this, with an accompanying hospital letter, after being charged.

But the EBU’s written ruling states that it ‘decided this should not influence our decision’.

Mr Bornecrantz, who worked as a management consultant, describes himself as ‘high functioning’, but admits his condition means his ‘social skills are not always the greatest’ and confrontations ‘do set me off’.

He wrote to the EBU that the swearing charge was ‘fatuous’ but accepted that if he had directed a four-letter word at the tournament director it ‘would have been accurate but aggressive’.

He also told the EBU its insistence on the use of a particular convention card was ‘over-prescriptive nanny authoritarian Nazism’. He denied that he ‘snatched’ the cards. 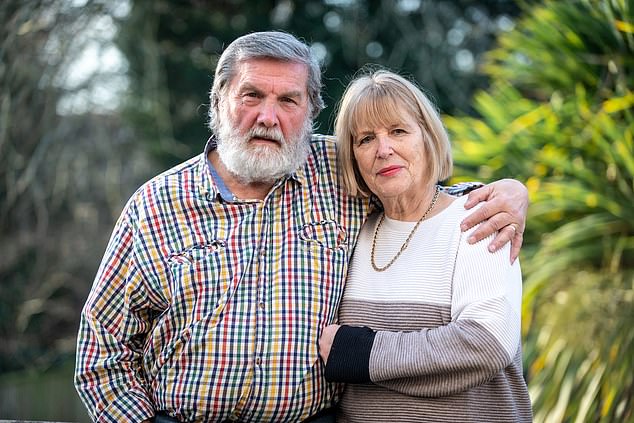 Cards on table: Leiv Bornecrantz, with wife Liz, says autism means he ‘does not smile’ even when playing bridge.  Mr Bornecrantz, who worked as a management consultant, describes himself as ‘high functioning’, but admits his condition means his ‘social skills are not always the greatest’ and confrontations ‘do set me off’

‘One man’s taking is another man’s ‘snatch’,’ he maintained. As for the charge that he was aggressive, he said: ‘If just walking towards the tournament director is aggressive, the definition needs an update.’

He added: ‘I am autistic, I look fierce at all times, my face does not smile, my eyes do. To accuse me of looking aggressive is like accusing me of breathing.’

Mr Bornecrantz said: ‘I was found guilty by a kangaroo court in a case that is essentially about using the wrong stationery. I’m prepared to launch a civil case in a proper court if I have to.’

Yesterday EBU chief executive Gordon Rainsford said: ‘The EBU has a comprehensive equalities codes, but will not tolerate abuse against its officials and staff.

‘Although the disciplinary panel was aware that the defendant had stated he was autistic, there was no plea in mitigation.

Mr Bornecrantz has twice unsuccessfully sought to take legal action against the EBU over a separate case concerning the transfer of master points, used for ranking players, from his Australian record.

The EBU is considering applying for a restraining order against Mr Bornecrantz following his letters about the convention cards.

Mr Rainsford added: ‘We think that we have quite a number of members who are on the autistic spectrum and we would be happy to make any reasonable accommodation for them to be able to play in our events.’