PSV Eindhoven closed in on the playoff round with a 3-0 home rout of Danish side Midtjylland in the first leg of their Champions League third qualifying round tie on Tuesday night.

An impressive first half saw PSV take a 19th-minute lead as England Under-21 midfielder Noni Madueke, a £20m target for Leicester City and Crystal Palace, unleashed a superb shot from 20 metres into the top corner.

Germany midfielder Mario Gotze made it 2-0 in the 29th with a heavily deflected shot and Cody Gakpo added the third three minutes later with a simple tap-in from two metres after a flowing move.

Former European Cup winners Red Star Belgrade were held to a 1-1 home draw by Moldovan side Sheriff Tiraspol after they were reduced to 10 men.

Sheriff took the lead out of the blue in Belgrade as Frank Castaneda curled in a sublime free kick before Frenchman Lois Diony equalised on the stroke of half-time after he took advantage of some poor defending.

Both sides missed several chances to snatch a winner after Red Star, who won Europe’s premier club competition in 1991, had midfielder Guelor Kanga sent off in the 57th minute for a second yellow card. 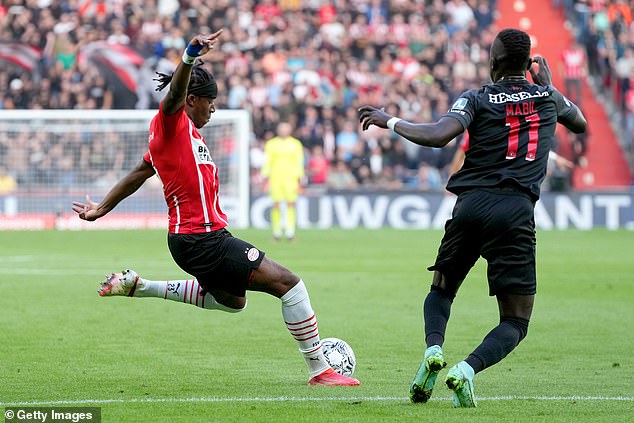 ‘Sheriff are a team full of speed and talent,’ Red Star coach Dejan Stankovic told Arenasport television after a frustrating evening for the Serbian champions.

‘Having fallen behind, we managed to equalise and create some chances after we were reduced to 10 men. It’s not over yet, we can pull it off in the return leg.’

With the away goals rule no longer in effect, Stankovic will rely on his misfiring side to show more bite in Moldavia after creating few chances against a rugged Sheriff defence. 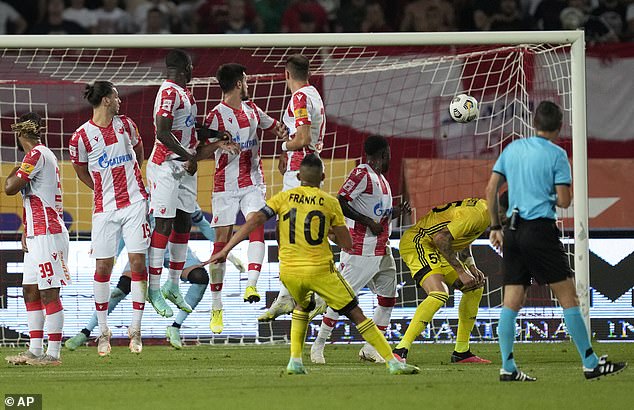 A dominant Monaco forced Sparta into submission as midfielder Aurelia Tchouameni gave them the lead with a thumping header before Kevin Holland drilled a powerful shot into the roof of the net.

Elsewhere, Shakhtar Donetsk came from behind to earn a 2-1 win at Belgian side Genk and a stoppage-time goal from Vincent Sierro gave Young Boys a 1-1 draw at Romanians Cluj who took a third-minute lead through Cristian Manea.

Olympiakos Piraeus also left themselves with work to do following a 1-1 home draw with Bulgaria’s Ludogorets Razgrad.