Real Madrid overcame Paris Saint-Germain in the first-leg of their Champions League tie on Wednesday night.

They responded to an early set-back by scoring three on the spin. That came courtesy of a few tactical switches by both managers and some defining performances by those already on the field.

Sportsmail has analysed the tactical outlook of both sides and how the game was won at the Santiago Bernabeu.

What will become the later stages of Cristiano Ronaldo’s career has been defined by his complete alteration in playing style.

And — as much as there are still questions over the manager — the most important thing Zinedine Zidane has done is indulge what is best for his Portuguese talisman.

Ronaldo has lost the physical advantage that defined the early part of his career. Players with that explosive gift usually struggle when they age, so unused to having to use their brain rather than their legs.

But that is not the case with Ronaldo. 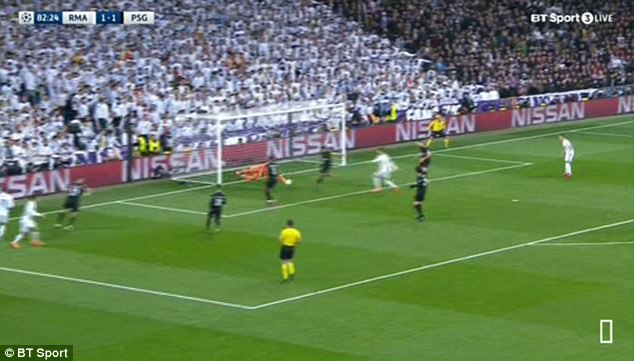 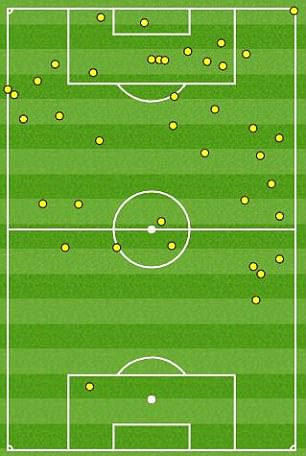 Ronaldo’s touch map from the win over PSG

They always say that the first yard or two for the best poachers is in their heads. That is how the likes of Ian Rush, not naturally rapid, always found space in the box.

The 33-year-old has the same knack. His run for the defining goal of the game — Real’s second — was exceptional. He is perfectly placed in the area, between two defenders, to profit when the ball ricochets back off PSG goalkeeper Alphonse Areola.

Yes, the finish comes off an unconventional part of his body, but it does not matter. The goal is little to do with the quality of the strike and everything to do with where he has moved to when the opportunity comes.

If you look at his touch map from the game, there is so much effort on his part to try and operate in central positions. It makes sense – after all, that is where he is most dangerous. He clearly has a better footballing brain than anyone would have imagined in his early jinking years.

A further note on Zidane and how he keeps getting form out of Ronaldo.

On paper the team looked as though it’d be a conventional 4-3-3, with Isco on the right and Ronaldo on the left. Yet Ronaldo ended up playing alongside Karim Benzema in a striking berth.

The only problem was that Benzema ended up doing a lot of the ‘creative’ work in Ronaldo’s place. He no longer has the ability to put himself about like that.

Which is why the introduction of Gareth Bale and Marco Asensio had such an impact.

Owen Hargreaves said after the game: ‘They look more dynamic without Benzema, Bale has come on, Asensio… they looked quicker, sharper.’

Asensio provided the assist for the second and third. He brilliantly stretched the play for the second, something Real had been lacking aside from Marcelo’s contributions.

More importantly, it meant Ronaldo could operate as a pure No 9. That is all that should be asked of him going forward. 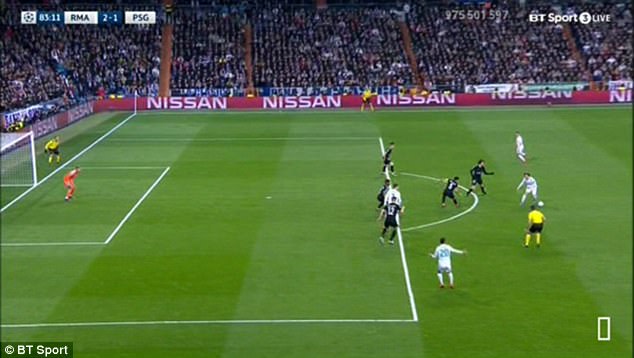 Marco Asensio stretched the play when he came on, allowing Ronaldo to operate more freely 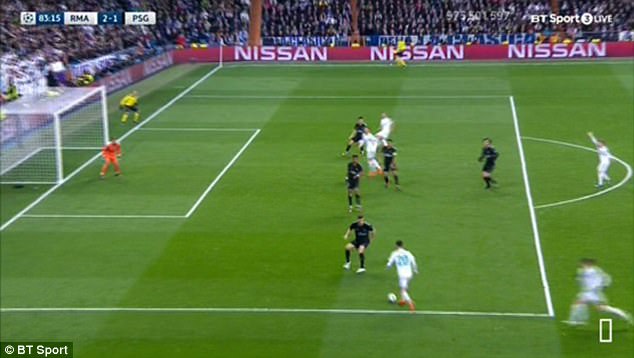 If Zidane got his changes right, Unai Emery got them all wrong.

One of the key moments of the match was his decision to take off striker Edinson Cavani, who was having a little bit of joy against Real’s defenders, and replace him with Thomas Meunier, a right back, in the 66th minute.

It meant Real had no real danger to worry about and could push forward as much as they liked. Within 20 minutes PSG had conceded twice. 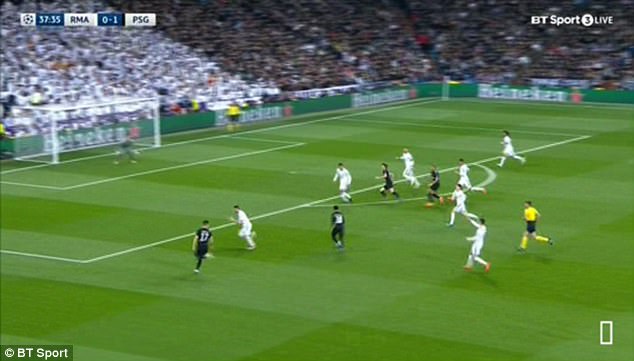 Edinson Cavani at his best, working with Neymar… at that point, Real had plenty to worry about

There would have been a moment of panic for Real in the opening exchanges. Marcelo went to ground, Dani Alves reacted immediately and it looked as though the left back would have to come off.

That would have been a hammer blow for Zidane. Few notice it, but Marcelo has this incredible knack of coming out of the knockout stages of the Champions League as Real’s most important player.

From the off he provided drive up the field, which Real lacked because of their formation — Ronaldo and Isco both operating narrowly, the three-man midfield doing the same.

He pushed up and ensured they had a threat and could stretch the pitch. 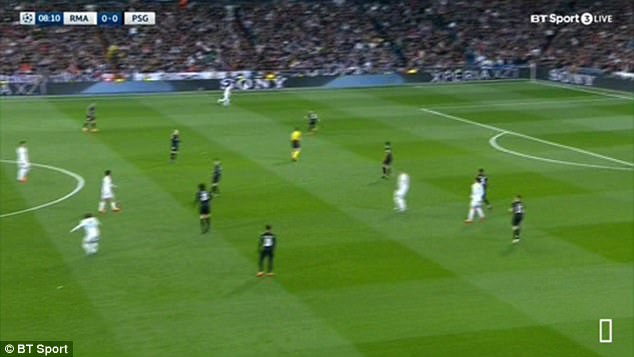 Marcelo pushed up regularly for Real Madrid, ensuring they had a threat and stretched play

The third goal, which could be killer to PSG’s hopes of going through, was all about him.

He picked up the ball on the left. A short pass to Asensio gives him the chance to find a pocket of space. A couple more balls and it ends up back at his feet. Marcelo then plays a rapid one-two with Toni Kroos, feeds it out to Asensio and drives into the box.

And when the cross drops at his feet, he meets it with a sweet finish that — while deflected — ends up in the back of the PSG net.

If Real are to somehow secure a third Champions League on the bounce, the 29-year-old will inevitably be a key man. 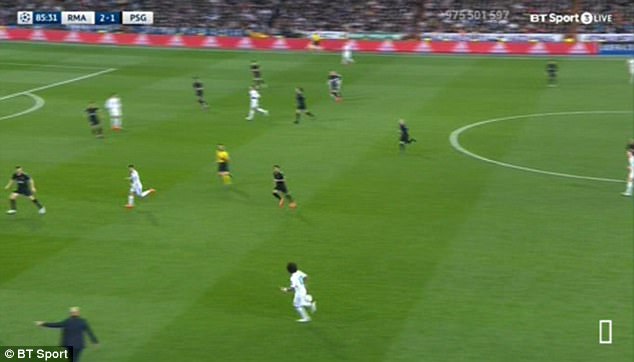 Marcelo started the move for Real’s third goal, initially picking up the ball in the PSG half 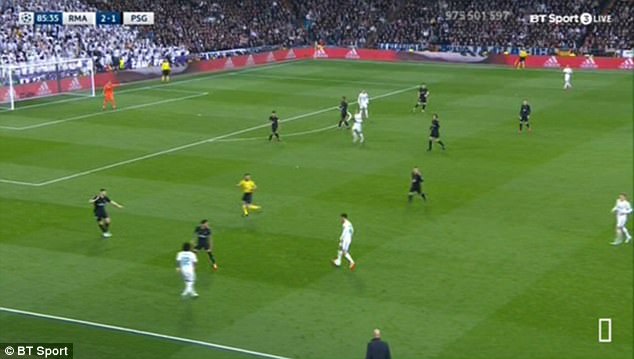 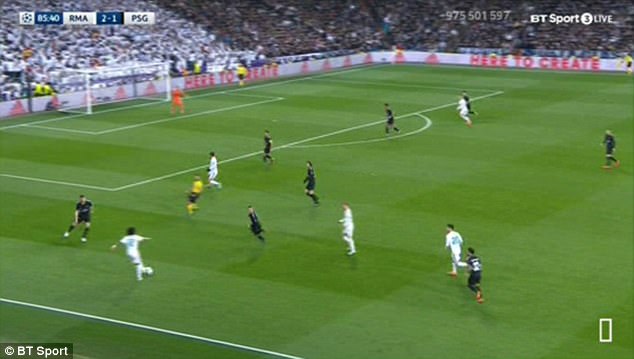 A couple more balls and it ends up back at his feet, before he plays a pass in to Toni Kroos 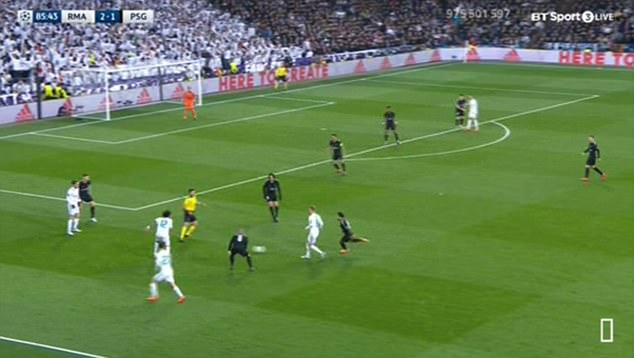 Kroos immediately plays a one-two with Marcelo, giving the ball back to the left back 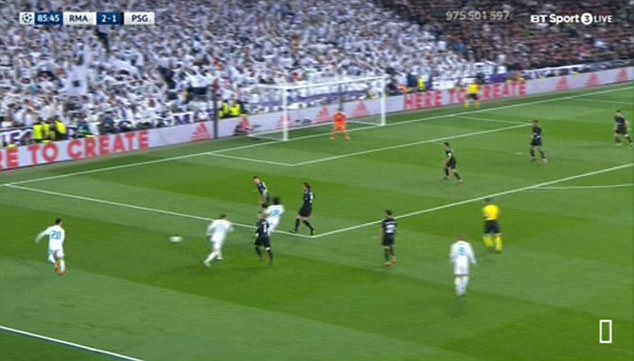 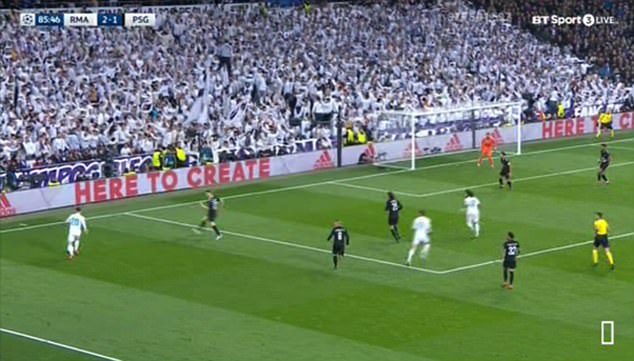 The defender, now in an excellent position in the box, finds some space ready to receive it 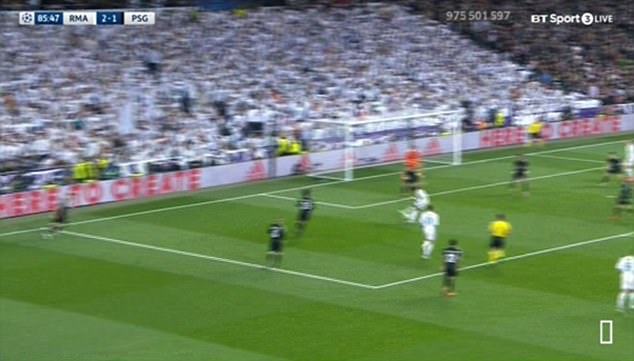 It would be remiss not to mention Neymar throughout this. It looked early on as though he might have a defining role in the game, teeing up Adrien Rabiot in the 33rd minute with a superb back-heel to put PSG ahead.

That was his 12th assist in the Champions League since the beginning of the 2016-17 season, which is more than double the amount any other player has managed.

He then darted through just minutes later, almost giving Cavani the space to score with a brilliant run.

But the problem was, as the game grew, that Real knew how to shut him down. He kept drifting centrally because Nacho was relatively disciplined at right back, not attacking in the same way as Marcelo.

In the middle he found no space. And the game drifted by him following that early intervention.

Yuri Berchiche, once of Cheltenham Town, only joined PSG in the summer and had never played in Europe before this campaign.

Emery also chose to drop Thiago Silva and play Presnel Kimpembe, a PSG academy graduate, in central defence. Kimpembe is a 22-year-old of some talent, but he’s also one of the lowest paid players in the PSG squad.

And this was only his fourth game in Europe. It was Kimpembe who failed to pick up Ronaldo for his second.

To have those two start in defence at the Santiago Bernabeu was asking for trouble.

Madrid ceding control and letting that work for them

Real have supreme passers of the ball in the centre of the park in Luka Modric and Kroos. They also have one of the more talented defensive midfielders on the planet in Casemiro.

So they didn’t try to play through midfield. Compared to their average in the Champions League this campaign, every member of Real’s midfield played at least 10 fewer passes. Modric and Casemiro attempted 30 less.

That meant Marcelo could drive from deep, Ronaldo could make runs past the last line of defence and Real could pick them up with direct balls.

They overcame the battle by not even waging war. Sometimes that is the way to go. 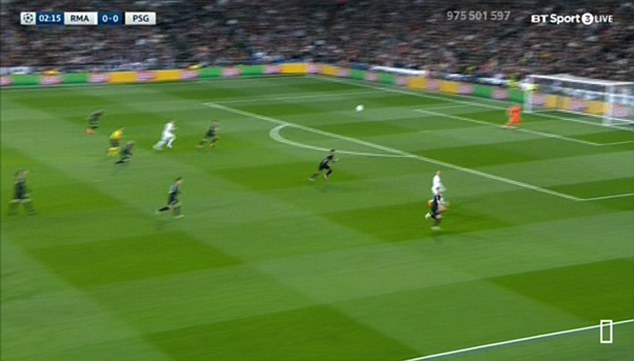 A ball played directly to Ronaldo in the opening minutes, which was how Real played all night