A frightened resident who lives in a sister building to the collapsed Champlain Towers shared a snap of damage to his building and says he fears it could crumble next – as the local mayor said he wouldn’t want to spend the night in the complex’s other surviving tower.

Robert Lisman shared the snaps and spoke to local news outlets after spotting the huge chunk of concrete gouged out of the column of nearby Champlain Towers East, where he lives. A rusted metal ‘rebar’ – used to reinforce concrete used in construction – was visible as a result of the damage.

Lisman attended an emergency meeting about the collapse in Surfside, Florida, on Friday night. Afterwards, he told Local10: ‘I am afraid that there could be some issue in our building that will result in what we saw in Champlain Towers South.’

Meanwhile, Surfside Mayor Charles Burkett did little to calm local residents’ fears Monday night, saying: ‘If you ask me if I would want to spend the night in that building, I would not be willing to do that.’ He was referring to Champlain Towers North.

Residents of Champlain Towers North and East have been offered the option of voluntary evacuation. They will be put in alternative accommodation until a full inspection deems their homes safe to return to.

Speaking to NBC6 on Monday, Lisman said: ‘I have concerns, but I’m not panicking. I know that there are things we need to address and look at, but there’s no imminent threat.’

Lisman added that he was ‘confident’ that Champlain Towers East was still structurally safe, but said of planners and engineers now inspecting local properties: ‘Their decisions have life and death consequences.

‘And so when I’m told there’s nothing to worry about, it’s trust but verify.’

Residents at Towers East and North buildings are now worried after spotting cracks in their units following Thursday’s collapse, which has left at least 10 dead

Lisman spoke after Surfside Mayor Charles Burkett pledged to a building review for the remaining East and North Champlain Towers, saying it was ‘imprudent not to take some types of steps to address that issue with the sister building.’

The east tower, which was built in 1994, sits two spots away from Champlain Towers South, and is also next door to Champlain Towers North. The South and North towers were both built in 1981, with all three buildings constructed by the same developer, to similar designs.

Commissioner Eliana Salzhauer added that Surfside must expand and increase building recertification requirements and called for additional studies to help prevent such tragedies from occurring in the future.

The emergency meeting was held just one day after the formerly 12-story Champlain Towers South collapsed. As of Monday, at least ten have been confirmed as dead and 156 are still missing.

Authorities in Miami-Dade County are continuing to search for survivors who might be trapped in air pockets under the collapsed Towers South rubble. Search and rescue dogs have been deployed on scene as of Friday morning. 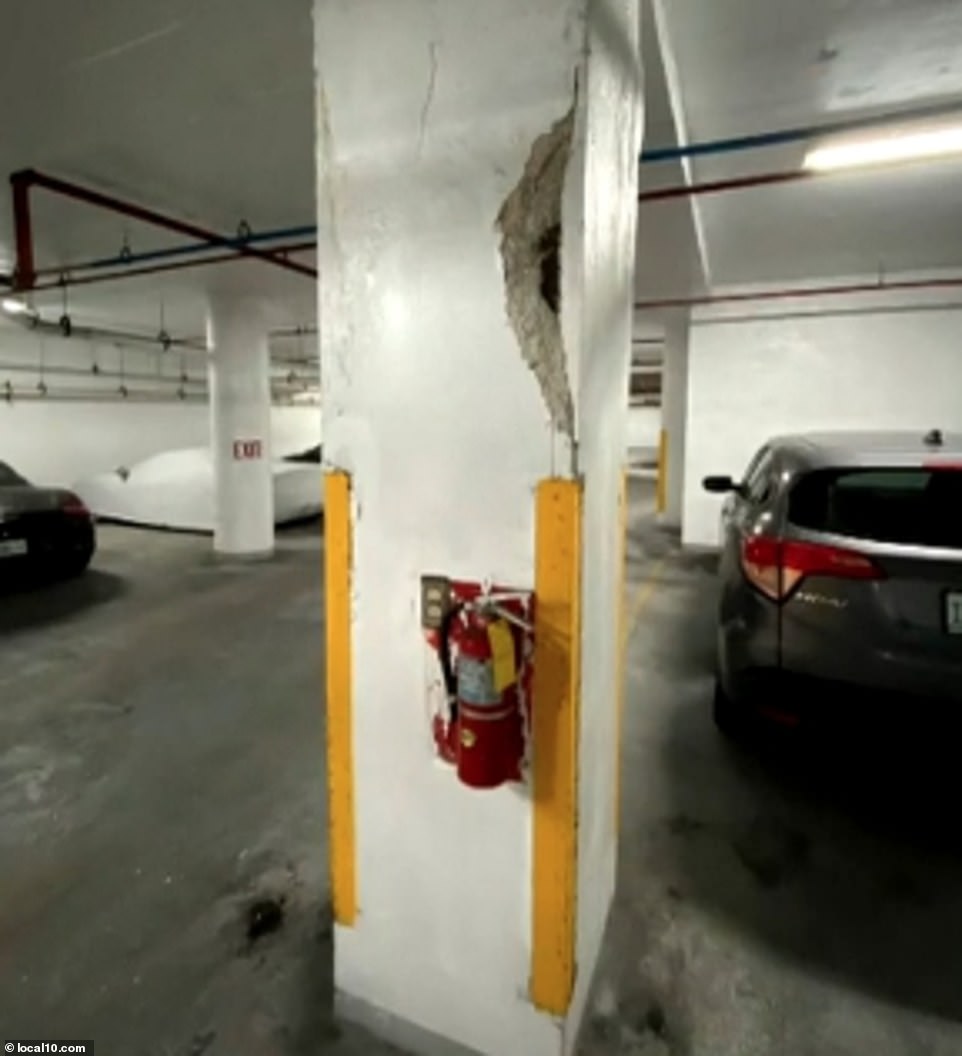 Structural damage can be seen at Champlain Towers East, adjacent to the site of Thursday’s condo collapse, causing residents great concern over the integrity of their own building 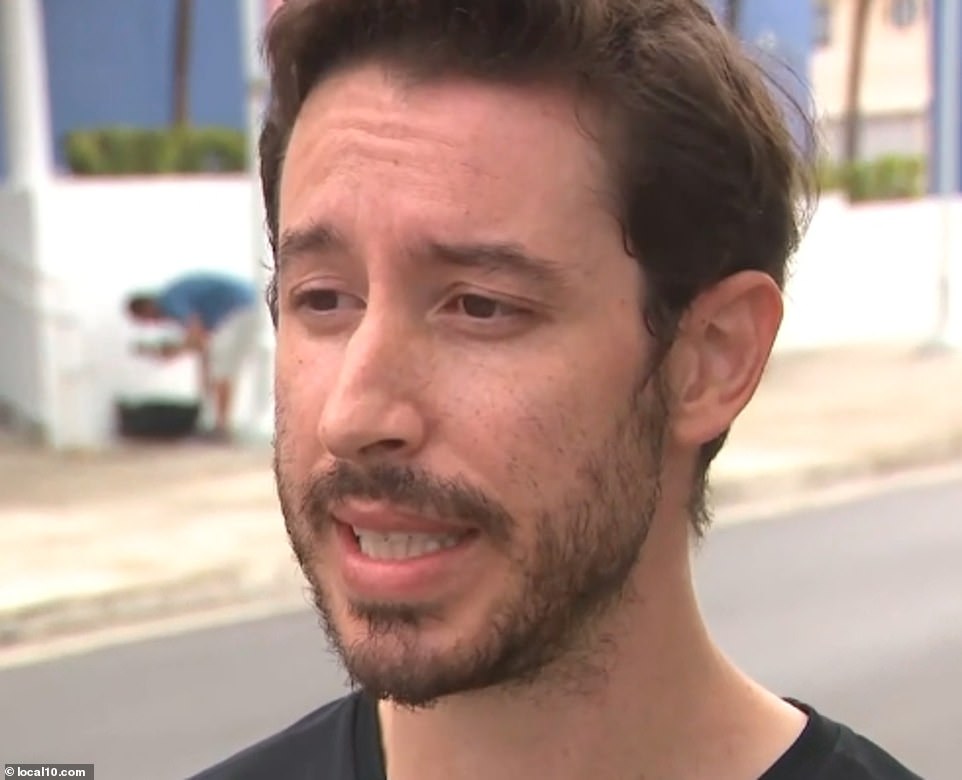 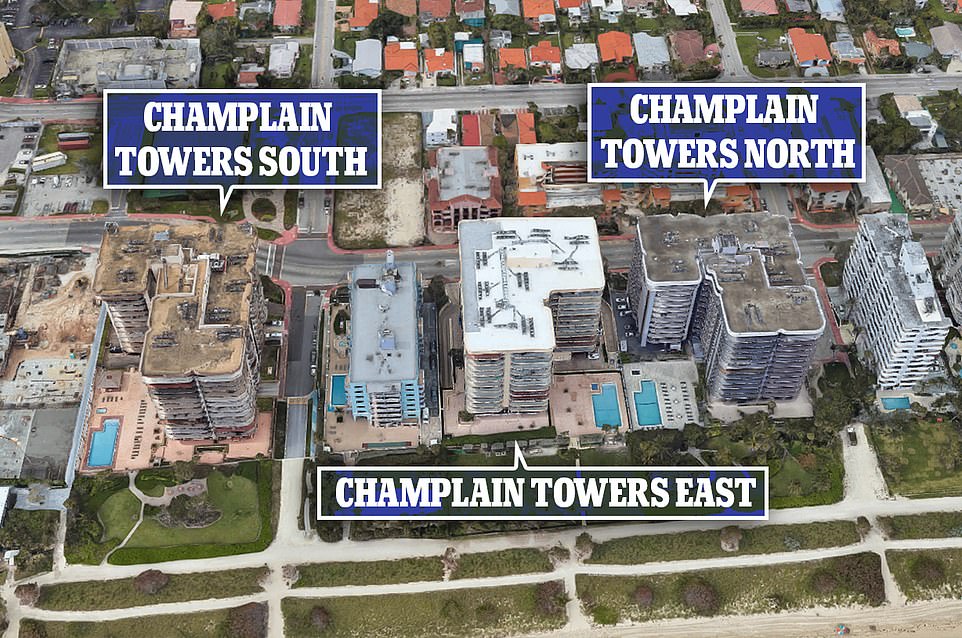 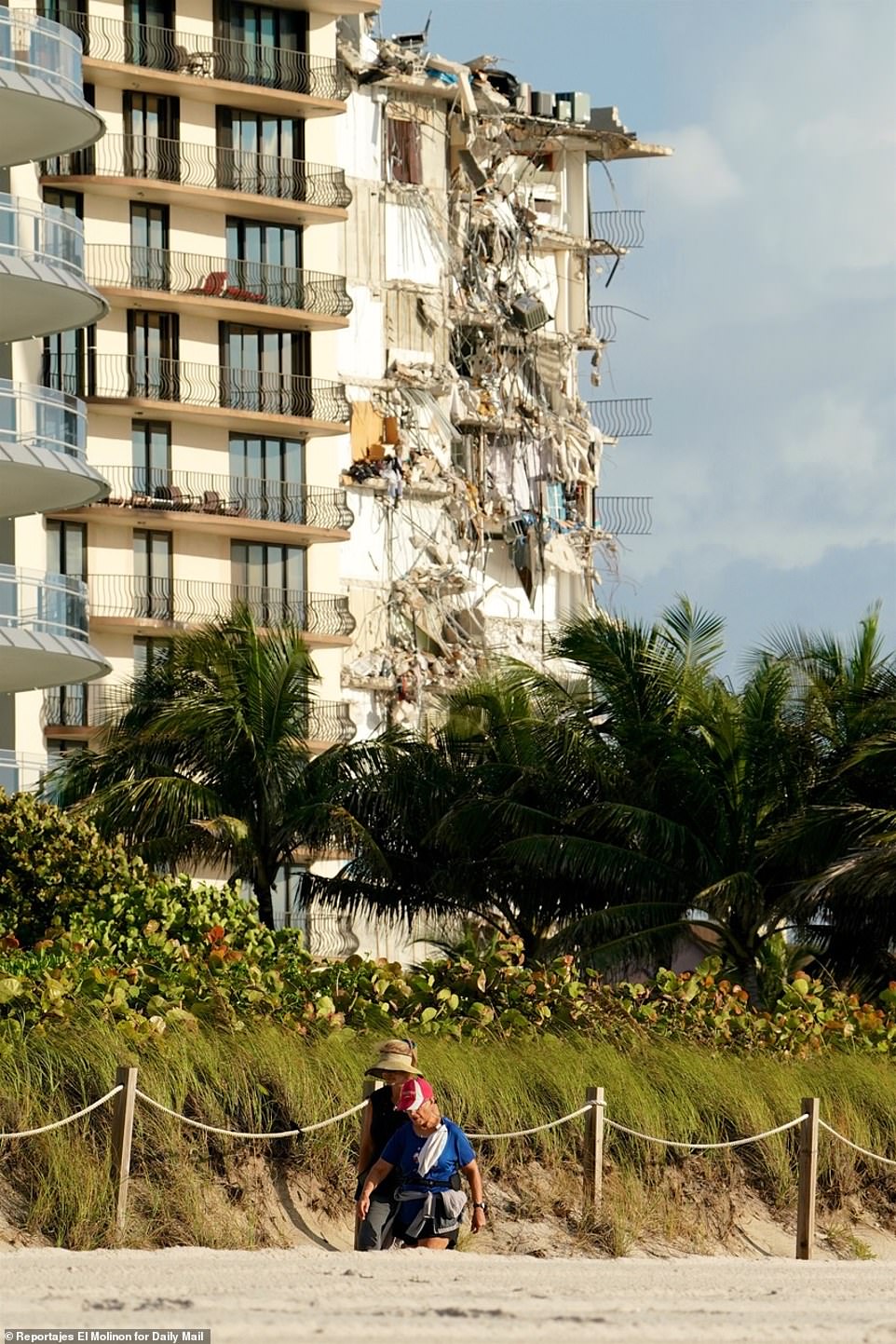 The extent of the damage from Thursday’s partial collapse can still be seen as of Monday, as officials held an emergency town meeting to address concerns of nearby residents

During Friday’s meeting, residents and town officials alike discussed how the recent tragedy will affect building certification and recertification processes, which currently involve inspections every 40 years according to area news affiliate Local10.com.

‘Hurricane Andrew changed the Florida building codes forever, so this terrible tragedy, which is a national tragedy, is going to change the building codes as they relate to certification,’ the town’s building official, James ‘Jim’ McGuinness, said during Friday’s emergency meeting.

McGuinness says he was in the process of inspecting the replacement roof’s anchor at the Champlain Towers South around 14 hours before a part of the structure collapsed.

While work was being done on the Towers South rooftop at 8777 Collins Ave., McGuinness stresses that nothing on the roof would have caused the building to crumble like it did.

‘There was no inordinate amount of equipment or materials or anything on that roof that caught my building official’s eye that would make it alarming as to this place collapsing,’ he said, while noting that the cause of the collapse still remains under investigation as of Monday. 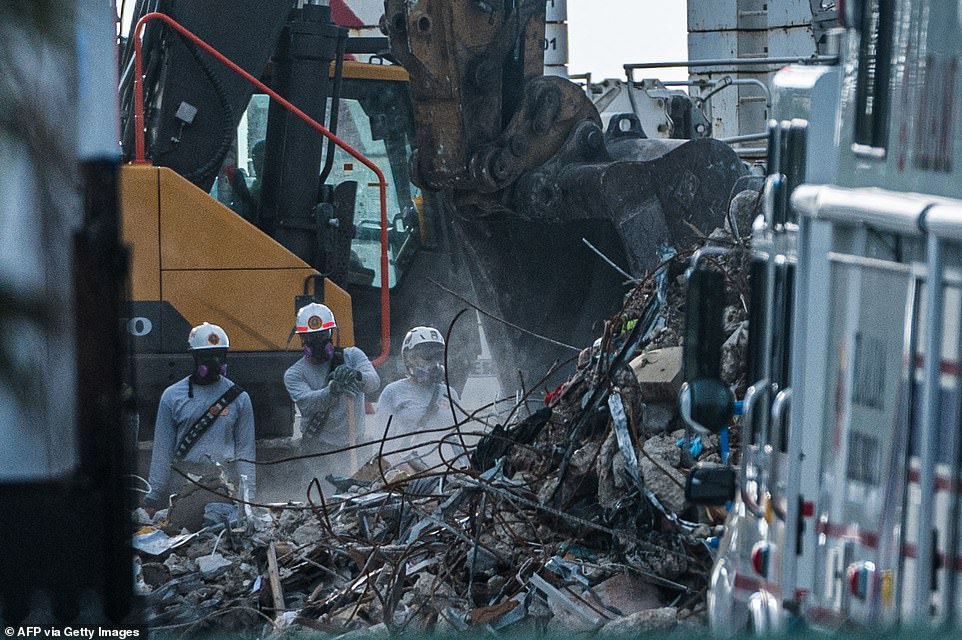 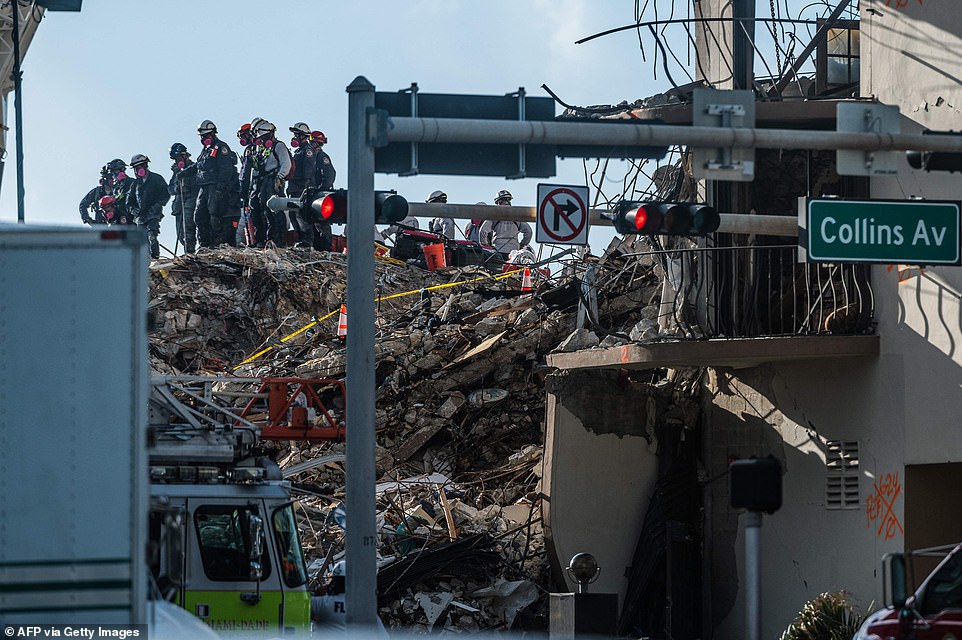 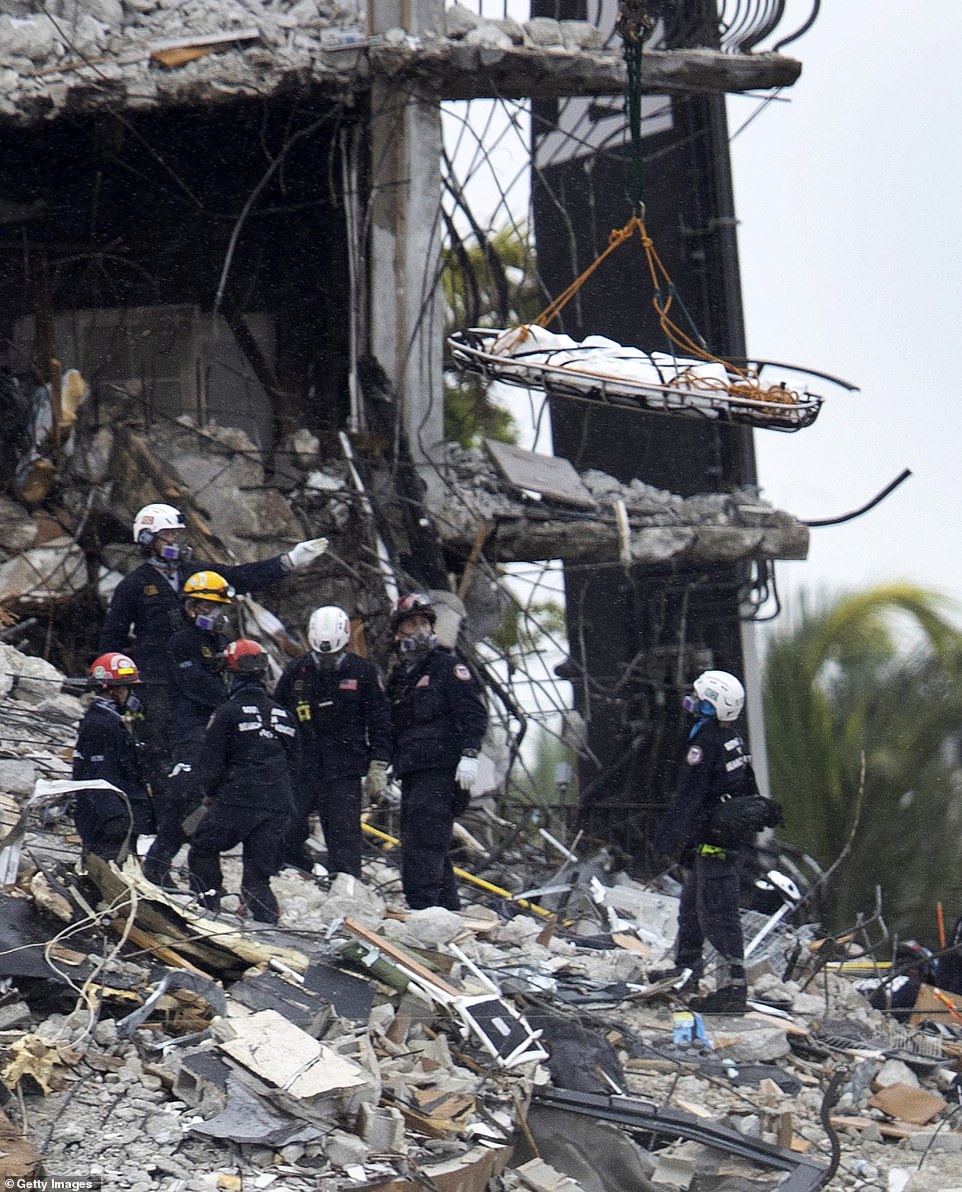 A stretcher is lifted out of the wreckage of Champlain Towers South on Monday afternoon. The death toll for the disaster now sits at 11 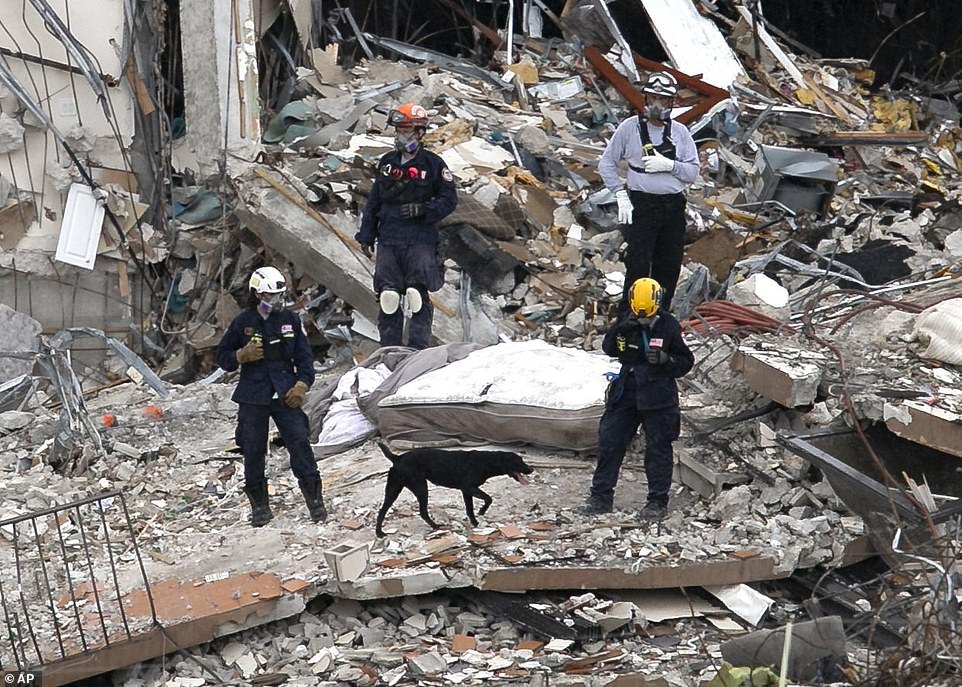 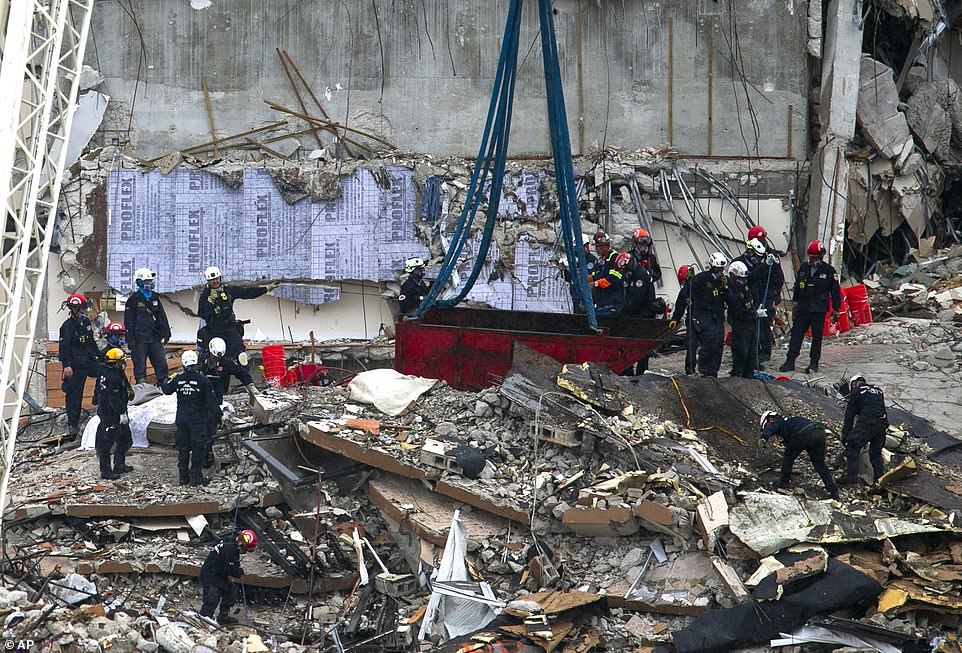 A red dumpster was winched onto the site on Wednesday. Hopes are fading of finding survivors from the disaster, with 150 people still unaccounted for

Town officials had previously hosted an information session at the community center at nearby 9301 Collins Ave. for those residents who are still looking for unaccounted-for relatives shortly after the collapse.

Mayor of Miami-Dade County Daniella Levine Cava said relatives were being briefed twice every day since the fatal collapse, while displaced residents were ultimately moved to Grand Beach Hotel Surfside on Friday, according to the local news outlet.