Philip Hammond has ordered an overhaul of inheritance tax rules to make them simpler, it emerged today.

The Chancellor asked the Office for Tax Simplification (OTS) to identify ways to make declaring and paying inheritance tax ‘as smooth as possible’.

The prospect of new reform comes less than a year after changes created by George Osborne, the former Chancellor, came into force.

In a letter to the OTS, Mr Hammond said: ‘Inheritance tax, and the system within which it operates, is particularly complex and I would like to request that the OTS carry out a review.

‘I would be most interested to hear any proposals you may have for simplification, to ensure that the system is fit for purpose and makes the experience of those who interact with it as smooth as possible.’

The letter adds: ‘It could also look at how current gift rules interact with the wider IHT system, and whether the current framework causes any distortions to taxpayers’ decisions surrounding transfers, investment and other relevant transactions.’

Sarah Coles, an analyst at Hargreaves Lansdown, the investment broker, told The Times: ‘The tax framework distorts people’s behaviour and financial decisions, and inheritance tax is no exception.’ 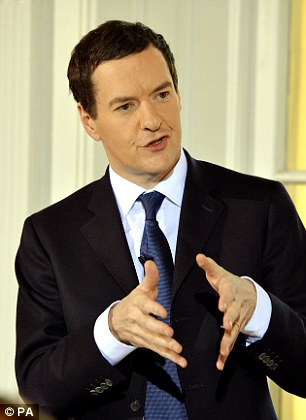 The prospect of new reform comes less than a year after changes created by George Osborne (file image), the former Chancellor, came into force

She added: ‘Anyone who has ever wrestled with estate planning and inheritance tax can appreciate that the whole system can be a nightmare of complexity.

‘The pension freedoms and the additional residence nil-rate band may have reduced IHT for many, but they have made things much more complicated rather than less, so it’s about time someone took a big red pen to the myriad rules and regulations.’

The new review comes weeks after it emerged inheritance tax receipts are spiralling and officials will collect an extra £900million more than expected by 2022.

The revelation, buried in November’s Budget papers, will increase pressure on the Government to go further in cutting the levy on estates passed onto relatives.

In March the Office for Budget Responsibility suggested £32.4billion of inheritance tax would be paid between 2016 and 2022. 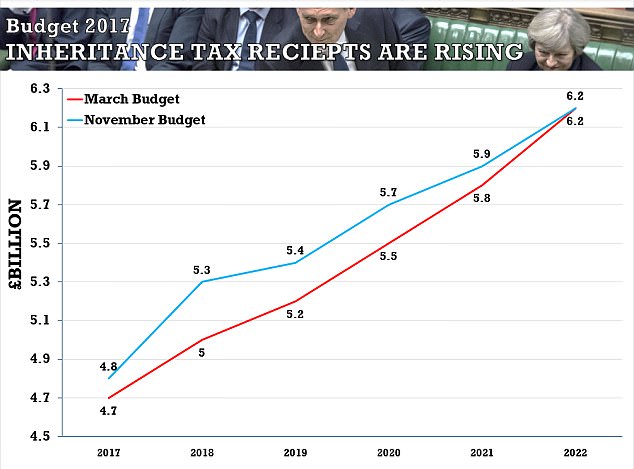 Inheritance tax receipts are spiralling and officials will collect an extra £900million more than expected by 2022, Budget figures reveal. Receipts will be higher than expected in each of the next five years according to the new forecasts (blue line) compared to in March (red line)

It has now revised that figure up by almost £1billion, fuelled by a higher forecast for the number of people dying and rising house prices.

The taxman took £5.3billion from estates last year and that is expected to rise by around £1.2billion this year.

This threshold was frozen from 2009 until April 2017, when under Mr Osborne’s reforms it was hiked to £850,000 for couples wanting to pass their main family home onto their children or grandchildren.