Sajid Javid today pledged to increase the National Living Wage to more than £10 per hour as he also promised to lower the age at which people are eligible to be paid it.

Meanwhile, Mr Javid said the age limit would be slashed to include people aged 21 or over as he made a pitch to younger voters ahead of the next general election.

The policy formed the centrepiece of Mr Javid’s first Conservative Party conference speech since he became Chancellor as he used it to set out the Tories’ stall ahead of a potential snap poll.

He told Tory activists: ‘Over the next five years, we will make the UK one of the first major economies in the world to end low pay altogether.

‘To do that, I am setting a new target for the National Living Wage: Raising it to match two-thirds of median earnings.

‘That means, on current forecasts, this ambitious plan will bring the National Living Wage up to £10.50, giving four million people a well-earned pay rise.’

Mr Javid said lowering the age threshold to 21 and over would ‘reward the hard work of millennials’.

Treasury officials were unable to say exactly how much the policy will cost the public or private sector.

They estimated that the four million people who stand to benefit will do so by an average of £4,000.

Sajid Javid, the Chancellor, told Tory activists in Manchester today that the government will increase the National Living Wage 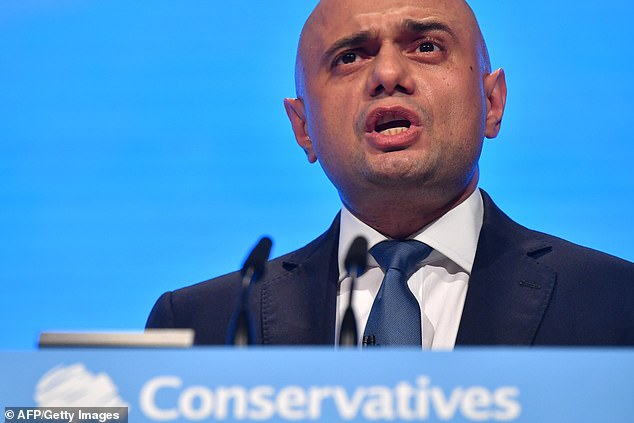 The plan is for for the National Living Wage to gradually rise before hitting an estimated level of £10.50 in 2024.

A spokesman for Mr Javid said after the Chancellor’s speech that there was ‘widespread support’ for the increase and that the Treasury expected it to have only a ‘small impact’ on the public sector wage bill.

The Chancellor also recommitted to the government’s pledge to deliver Brexit by October 31, with or without a deal, as he put himself on a collision course with Remainers.

He said that ‘never in my lifetime has there been a political moment like this’ as he insisted the Tories will ‘do our duty’.

Mr Javid conceded that a chaotic split from the EU on Halloween would present ‘significant challenges’ to the UK.

But he insisted that increased preparations for Brexit under the leadership of Boris Johnson had not only made a deal ‘more likely’, it had also made a bad break from Brussels ‘more manageable’.

Mr Javid also used his address to the Tory faithful to mount a bold bid to woo rural voters with billions of pounds for roads, broadband and buses.

The Chancellor promised an ‘infrastructure revolution’ as he set out the Conservative Party’s stall ahead of an expected early general election.

He announced the first projects in a £25billion, five-year road investment strategy as well as a £5billion package to support broadband roll-out to the hardest-to-reach 20 per cent of the country and a £220million fund for bus routes.

Some £20million will go on trials for ‘on demand’ bus services and £30million will improve existing services or replace cut routes.

The Chancellor’s spending commitments came as the Tories also announced that families will be able to add two storeys to their homes without planning permission.

Housing Secretary Robert Jenrick unveiled the move in a package of measures tearing up ‘outdated and bureaucratic’ planning laws.

It was originally aimed principally at town centres and would have still required light-touch planning approval. 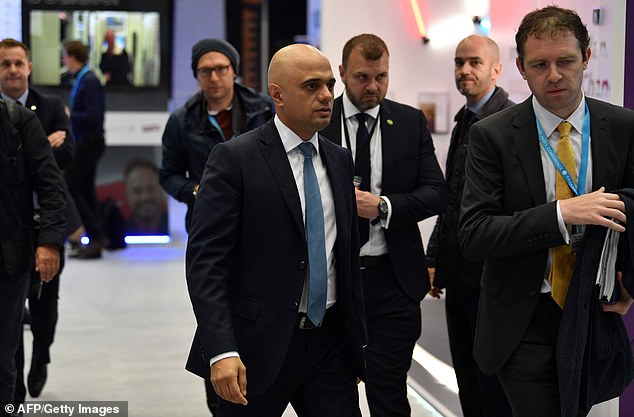 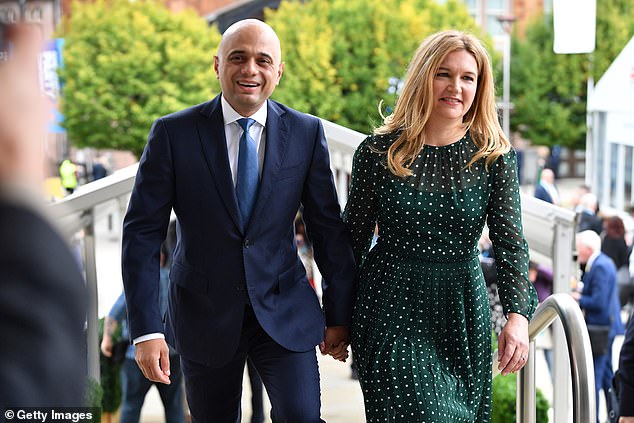 It is Mr Javid’s, pictured with his wife Laura King in Manchester today, first Conservative Party conference since he became Chancellor

But under the new plans, families will be able to build up to two storeys using permitted development rights – the same system used for small extensions and loft conversions.

The right will be afforded first to purpose-built blocks of flats, but will eventually be rolled out to all detached properties.

Homeowners will still need to comply with building regulations, but neighbours will not have a formal route to object.

The move will raise fears of a rash of unsightly developments – but ministers hope it will allow growing families to expand their property without moving, and encourage developers to add new homes to existing buildings.

Mr Jenrick said: ‘The bold changes to the planning process will make a real difference to people up and down the nation. All too often the planning system proves complicated, outdated and bureaucratic and is too complex and costly for people and small businesses to navigate.

‘This is a barrier to building the homes that we need… ‘I want to give families the freedom they need to expand their homes and ensure small developers get a fair chance to succeed. 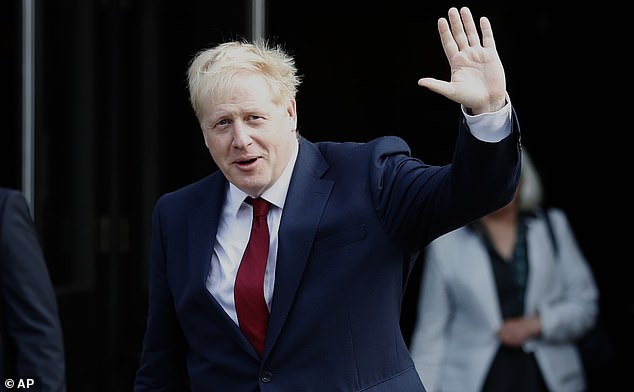 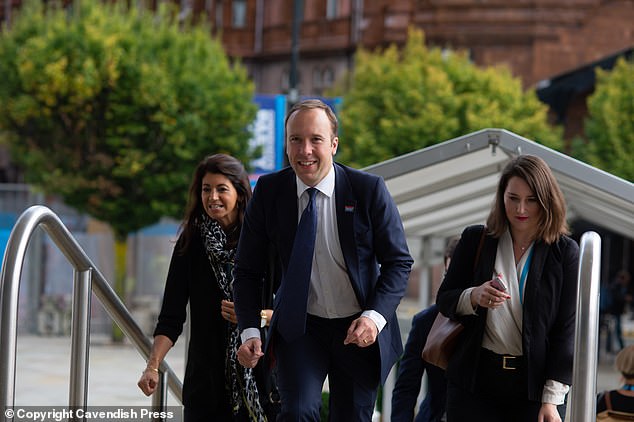 ‘Our vision for reforming the planning system will speed up and simplify the process, while ensuring that communities still retain a say over their future.’

Ministers will also try to accelerate the conversion of disused and unsightly commercial properties into residential homes.

Under a ‘permission in principle’ system, developers will not have to get detailed planning permission before the bulldozers can move in.

A source said: ‘This will create more attractive and prosperous high streets by replacing eyesores with family homes, while also reducing the need to build houses on green field land and in the countryside.’

Big developers will also be offered the option of a fast-track planning service in return for higher fees.

The package is part of wider moves to boost housebuilding, which is seen as a key battleground for an upcoming election.

However, ministers have dropped plans for new housing to be built on green belt areas close to railway stations. Sources said existing green belt protections would remain in place.

We must unleash the true potential of the North, says Transport Secretary Grant Shapps

I found it endlessly frustrating when, under Labour, I saw major local roads being downgraded, under-funded and not properly maintained. We have made improvements since then but there is no doubt much more to do to unleash the true potential of the North. That’s why, in July, I felt privileged to be appointed Transport Secretary, and immediately set about creating and maintaining a modern, fit-for-purpose transport system which makes people’s lives easier.

Which is why I’m delighted that today we are announcing major new support for infrastructure, confirming the first projects in our £25 billion delivery plan to upgrade key roads.

We are creating the first full dual-carriageway route across the Pennines since the M62 opened in the early Seventies. We are tackling congestion on the M60 in Manchester. We are working on a new Tees Crossing. We are better connecting Yorkshire, Cumbria and the North East. We are moving forward dozens of road schemes to speed up journeys, boost capacity and help businesses compete. 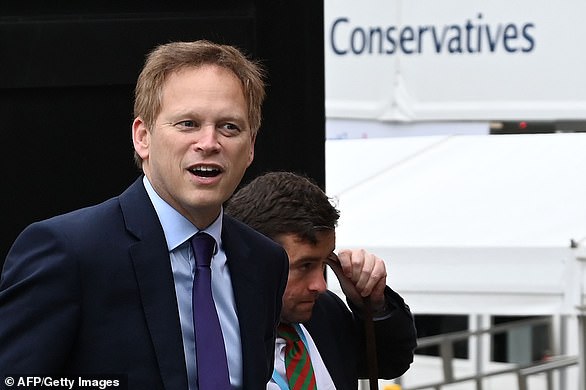 The 14 new local road schemes being brought into development to make improvements and upgrades to our roads, including work to complete the dualling of the A66 Trans-Pennine expressway from Scotch Corner to Penrith and improving the M60 Simister Island interchange in Manchester.

We will drive prosperity by better connecting the economies of North Wales and Scotland with Greater Manchester, Merseyside, Yorkshire, Teesside, Tyneside and Carlisle. That’s why we’re upgrading the A66 across the Pennines, and investing in the M60 around Manchester.

In the North East the new Tees Crossing includes constructing a bridge and widening the existing A19 Tees Viaduct. We are working closely with Tees Valley Combined Authority as it develops the business case, and I know how hard Mayor Ben Houchen is working to make it a reality.

Increasing the capacity of the road network, doesn’t just make travel easier motorists it also improves the experience of those who rely on our busses. That’s why alongside this we are investing £220million to transform bus services across England.

This includes new ‘superbus’ networks, including the creation of Britain’s first ever all-electric bus town, and expanding our fleet of low emission buses. We are committed to delivering cheaper, cleaner and greener travel for passengers.