The iconic Grease star died peacefully at the age of 73 at her home in southern California on Monday, surrounded by her family and friends.

Posting a several photos of the pair together on her Instagram page, the 54-year-old entertainment reporter said the late Australian icon was a life to be celebrated.

‘When I think of Olivia Newton-John, I think of love and light,’ Angela wrote.

‘She gave us music, movies and magic.’

Angela made special mention of Olivia’s charity, the Olivia Newton-John Foundation, which funds research into plant-based medicine and holistic treatments for cancer.

Angela lost both her father Alan and then her husband Peter to cancer seven years apart.

Her father Alan passed away in 2010 following an eight year battle with gastrointestinal stromal tumours.

Then, in 2017 she lost her husband Peter to another rare form of cancer: primary pulmonary synovial sarcoma.

Olivia’s battle with breast cancer first began in 1992 when she was just 44 years old.

The iconic Grease star died peacefully at the age of 73 at her home in southern California on Monday, surrounded by her family and friends. Angela paid tribute by sharing some beautiful throwback photos, including this one of Olivia and Angela’s daughter Amelia

She was very open about her diagnosis and treatment, which famously included the use of medical marijuana. Her cancer returned in 2013 and again in 2017.

‘The Olivia Newton-John Cancer Wellness and Research Centre has changed lives and will take us closer to that cure she dreamed of,’ Angela messaged.

‘Vale Olivia, and thank you.’ 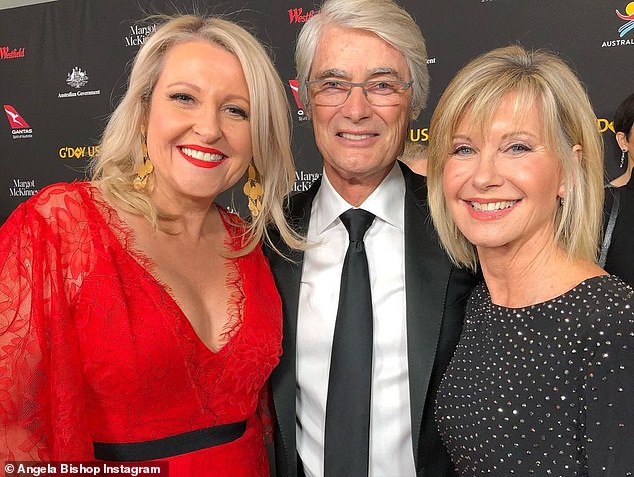 ‘When I think of Olivia Newton-John, I think of love and light,’ she wrote. Pictured are Angela, Olivia (R) and Australian music producer John Farrar, co-producer of the hit album Grease

In one of her pictures, Angela can be seen posing with Olivia alongside UK singer Cliff Richard. Another shows the TV celebrity having a laugh with Olivia and fellow Australia icon John Farnham.

One poignant photo shows Angela and Olivia with John Farrar, Australian music legend and record producer of the hit album Grease, the movie that turned Olivia into a international star.

Meanwhile, a bubbly Angela can seen holding her young daughter Amelia in another photo as a vivacious Olivia look on. 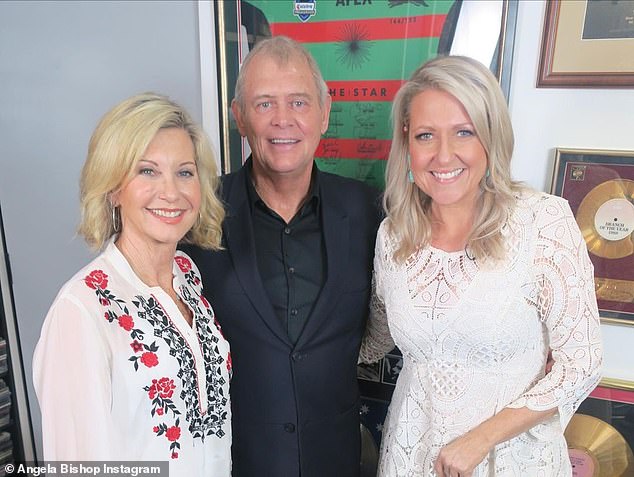