Jon Snow has admitted that he belongs to a ‘metropolitan elite’ that is out of touch with public feeling.

The Channel 4 news anchor said that he had ‘got it wrong’ on Brexit, and that he was ‘comfortably with the elite’, with ‘little awareness’ of people who are not part of the same club.

The famously liberal journalist admitted: ‘Over this past year, we – me included – mostly London-based media pundits, pollsters and so-called experts got it wrong.

Journalist and presenter Jon Snow, pictured, admitted he belonged to a ‘metropolitan elite’ who are ‘out of touch with the public feeling’

Addressing executives at the Edinburgh TV Festival, he went on: ‘We had better accept [that] all of us in this room are by definition part of the elite…We have, by the nature of our business, an obligation to be aware of, connect with, and understand the lives, concerns and needs of those who are not.

‘I believe we are in breach of that obligation – that in increasingly fractured Britain, we are comfortably with the elite, with little awareness, contact, or connection with those who are not of the elite.’

The comments from Mr Snow, 69, come less than two months after he was caught chanting ‘f*** the Tories’ at the Glastonbury festival.

Channel 4 bosses rapped him on the knuckles for breaking impartiality rules with the foul-mouthed episode, whilst Conservative MPs called for him to be sacked.

The episode came to light after a Twitter user posted a photograph of Mr Snow partying at Glastonbury, alongside the caption: ‘Having a dance with Jon Snow and hearing him shout f*** the Tories is what dreams are made of.’

The 69-year old allegedly told revellers at the music festival: ‘I’m supposed to be neutral’ after his comment about the Conservative party. 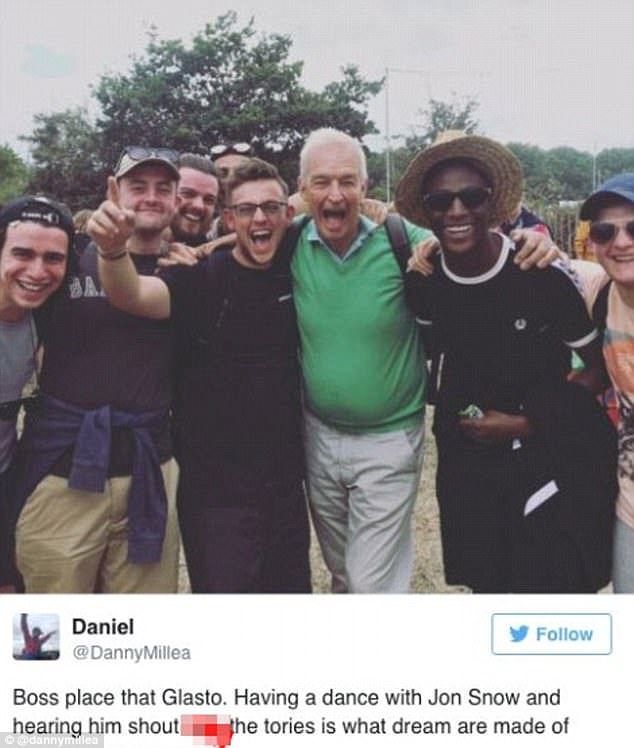 Snow’s comments come two months after he was accused of chanting ‘f*** the Tories’ at Glastonbury, pictured

However, he later claimed that he had no recollection of the episode.

Yesterday, the veteran journalist made light of the incident, as he delivered the prestigious annual MacTaggart lecture, given each year by a senior media figure.

‘Oh Glastonbury….like they say about the 60’s – if you remember it, you just weren’t there.’

Mr Snow is the longest running presenter of Channel 4 News, which he has presented since 1989.