A Channel 5 consumer show broadcast an advert for an aerial firm it was exposing for ‘ripping off’ pensioners during the ad break.

Before each case Esther boasts, ‘I’ve been defending consumers for 50 years’.

She then adds, ‘I’ve got a new target in my sight the rogue traders who prey on Britain’s 11 million pensioner’, before adding, ‘the writing’s on the wall for the scoundrels out there…your time is up because we’re going to catch you red handed’.

Her research team said they had complaints about aerial engineers doing work that wasn’t needed, one woman said her mother was charged £500 for a Freesat dish, when her TV only needed re-tuning and another pensioner charged ‘over the odds’ for a new aerial.

Investigators said they had a tip off about a company called Aerial and Satellite Express, with a lot of complaints online abut being charged for unnecessary work.

The company were found to take out ads in local directories, to target older customers who look for companies in the Yellow Pages, the show said.

‘Betty’ then posed as a customer and a worker from the company came to charge her £60 plus VAT for a diagnostic, which cost an extra £30 if he had to go on the roof, despite their advert stating initial surveys were free. 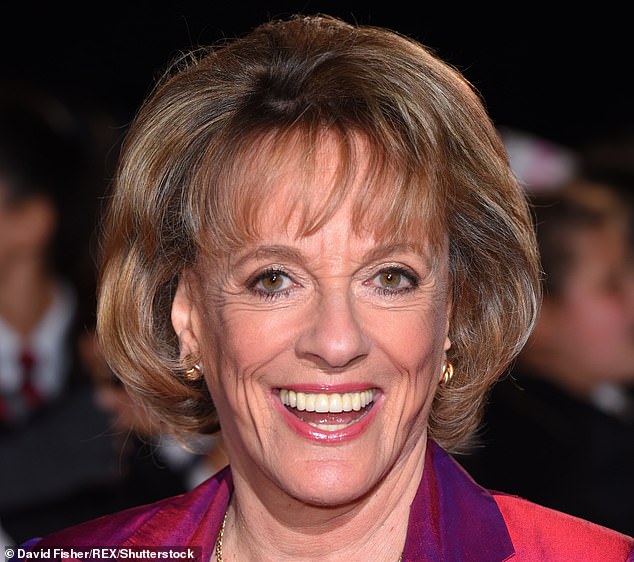 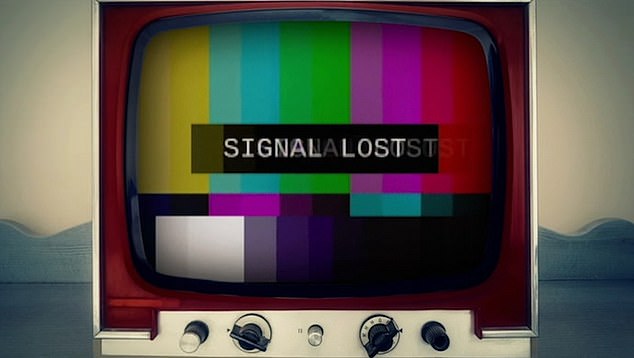 The companies tagline ‘striving for perfect pictures wherever you want them’, was broadcast at the end of the clip

The practice was described as ‘disgusting’ by an aerial expert watching the live feed of the aerial worker in the booby-trapped house.

But during an add break a commercial for the very company being investigated was broadcast, which had small print stating a diagnostic fee was £49.50.

The companies tagline ‘striving for perfect pictures wherever you want them’, was broadcast at the end of the clip.

Viewers took to social media to criticise Channel 5 for not knowing what was being shown during ad breaks.

One twitter user said: ‘You couldn’t make it up! watching Esther Rantzen’s house trap on @channel5_tv where investigating Aerial Express ripping off OAP’s during the ad break low and behold an advert of Aerial Express.’

Joanne Atherton Guy added: Are you having laugh? Just watched a bit of House Trap with Esther Rantzen. The company she is investigating just had a freaking advert in the middle of the show! Are you deliberately trying to confuse people or do you just have no idea what you’re broadcasting?’ 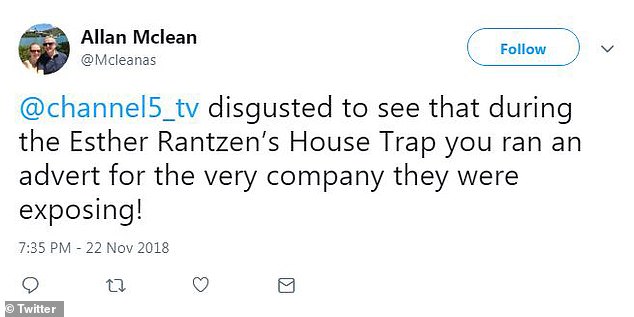 Allan McLean said: ‘Disgusted to see that during the Esther Rantzen’s House Trap you ran an advert for the very company they were exposing.;

Another user said: ‘The ad for the trader being investigated that C5 just put out during Esther Rantzen’s House Trap was either negligence by the channel, or something yet to be revealed at the end of the show.’

One woman added: ‘So I turned on #Channel5 there’s a programme on Esther Rantzen’s house trap. It’s saying about a company called Aerial Express they overcharge especially OAP, disabled shoddy workmanship etc next thing there’s an ad break & Aerial Express are on.. CONFUSED.’