A poorly-worded social media post by 7News has prompted outrage after it pointed out the ethnicity of England players who missed penalties in the Euro 2020 final.

The short Facebook post was a link to its story about the brutal onslaught of racist attacks Bukayo Saka, Jadon Sancho and Marcus Rashford had endured.

The three missed their crucial spot kicks in the penalty shootout climax of the Euro 2020 final against Italy at Wembley on Monday morning.

On Twitter and Facebook, the trio were immediately bombarded with vile racist online comments and jibes in the wake of the loss, which was widely condemned.

But 7News’ link to the story about the racist abuse showed little sensitivity.

It read: ‘Three Black players failed in the penalty shoot out which England lost 3-2 to Italy.’

British Labour MP and race campaigner David Lammy included the post as one of four examples of the shocking racism the three players had suffered.

He added: ‘This why we take the knee’, referring to the protest move in support of Black Lives Matter.

The backlash was equally as vicious in Australia, with former black Socceroo Francis Awaritefe slamming the TV network for the blunder.

‘Is there any surprise, that in an all white Australian newsroom – in this febrile climate – this vile headline can be posted on Twitter, then quietly deleted, after a surge of complaints, without an apology or any accountability?,’ he tweeted.

‘This is not about individuals – racism is systemic.’ 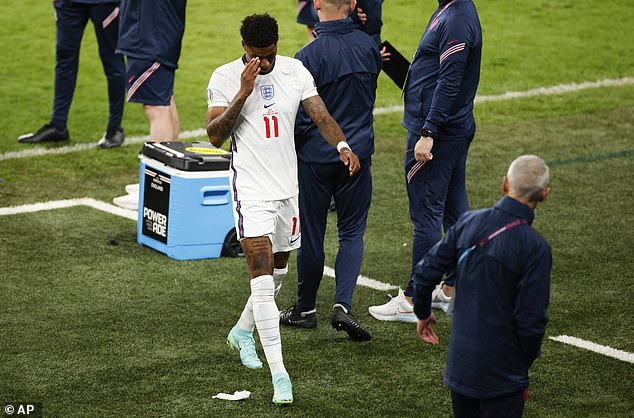 The short Facebook post was a link to its story about the brutal onslaught of racist attacks Marcus Rashford (pictured above), Bukayo Saka and Jadon Sancho had endured

ABC comedian Charlie Pickering added: ‘Hey @7NewsAustralia — what the f*** is with this headline? Have you lost your actual mind? And how has the person who wrote it been counselled?’

‘With racism a rising social scourge in Australia, on online platforms and athletes subject to vile abuse after #Euro2020Final and here in Australia, to see this from a major network in Australia is beyond disgusting,’ he tweeted.

‘Reprehensible. There needs to be a public apology.’ 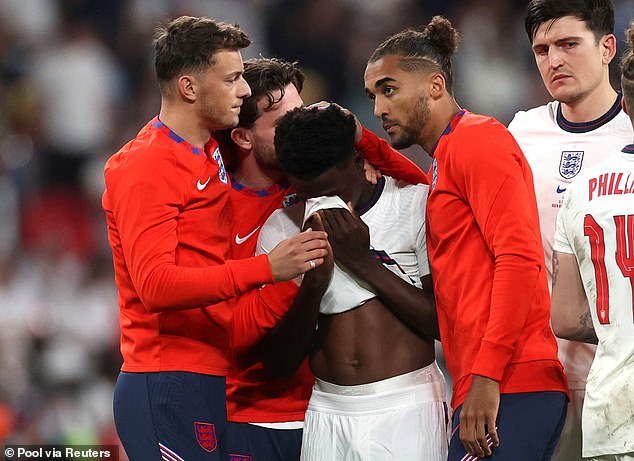 7News later edited the post to remove the word ‘black’ before finally deleting the post completely after the furious backlash and later released a statement later to apologise (pictured, England’s Bukayo Saka being comforted by teammates after his penalty miss)

7News later edited the post to remove the word ‘black’ before finally deleting the post completely after the furious backlash and later released a statement later to apologise.

‘Earlier on Monday, a 7NEWS.com.au social media post was published with a regrettable mistake,’ said the statement.

‘The post linked to an article condemning the racial abuse of England football players following the team’s loss to Italy in Sunday’s Euro 2020 final.

‘The caption on the post was swiftly rectified as soon as it was identified.

‘We sincerely apologise for the offence the post caused.’