Channel Nine’s coverage of the second leader’s debate made headlines for all the wrong reasons with the host repeatedly losing control of proceedings, technical issues polluting the broadcast and confusing results at its conclusion.

Prime Minister Scott Morrison and Opposition Leader Anthony Albanese repeatedly argued and spoke over each other in a debate that voters complained they found difficult to watch – and even harder to follow along.

Frustrated viewers took to social media to vent their anger about how the heated debate was mediated and a faulty online voting poll, which at one point listed the Coalition twice.

The network initially declared Labor Opposition Leader Mr Albanese as the preferred Prime Minister between the pair, despite a technical glitch leaving thousands of furious viewers unable to vote online.

It later announced Prime Minister Morrison as the winner before votes shifted back towards Mr Albanese and was later locked at 50-50.

A panelist’s question from voter ‘Mario’ to Mr Albanese also left viewers perplexed, while host Sarah Abo struggled to maintain order as the PM hopefuls squabbled throughout the widely-criticised debate.

The pair had several fiery clashes at Channel Nine’s north Sydney studio on Sunday night with the biggest blow-up coming on the topic of national security when the two men continuously yelled at each other.

In a key moment, the Prime Minister was humbled when he admitted that he should have described the Covid-19 vaccine rollout as a race after he repeatedly told Australians ‘it’s not a race’ at the start of 2021.

Who won the second debate?

But he landed a blow on Mr Albanese when he told the Labor leader ‘you have changed your mind on so many things’ and listed his policy backflips over the past three years.

‘Small target, big risk,’ he said while gesticulating at his opponent.

Some 50,000 Nine viewers voted for who they prefer as Prime Minister.

There were issues with the online voting poll with many reporting a technical glitch.

‘We are experiencing high volumes of traffic at the moment. Please bear with us and you will have the chance to have your say,’ the network said. 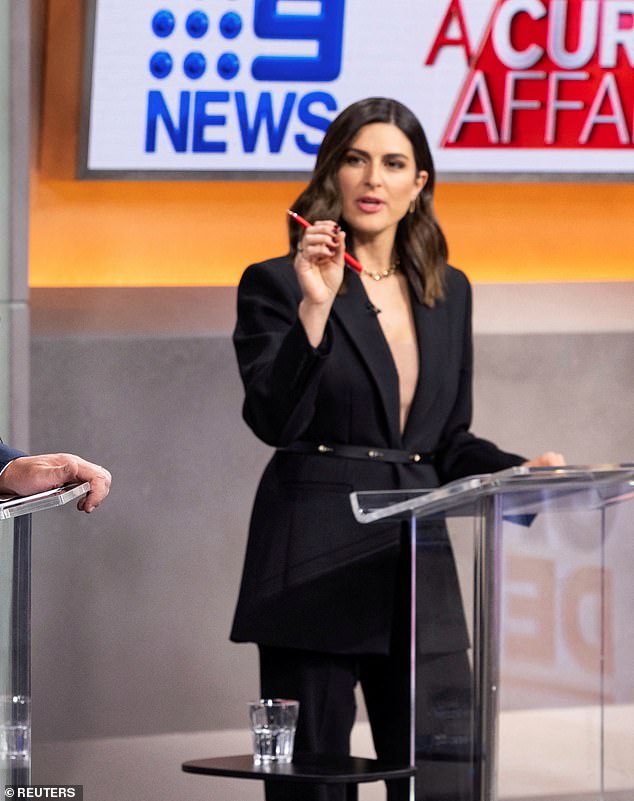 The winner of the debate was too close to call with the leaders tied on 50 per cent by the time the Nine broadcast ended at 10.45pm.

One viewer slammed the debate as an ‘unwatchable shambles’, both in the studio and online.

‘Farcical stuff from Channel 9. Embarrassing from a multi-billion dollar corporation with countless experts,’ another fumed.

Many poked fun at the online poll, which had the Coalition, Labor and Coalition as the options of which party will win the election.

He later wrote:  ‘This voting thing is officially a rort. I tried 20 times to click ‘Labor’ and then ‘Albanese’ for PM. It would not let me. But the first time I clicked ‘Coalition’ and ‘Morrison’ it accepted it. Total rort and joke. Nine should apologise.’ 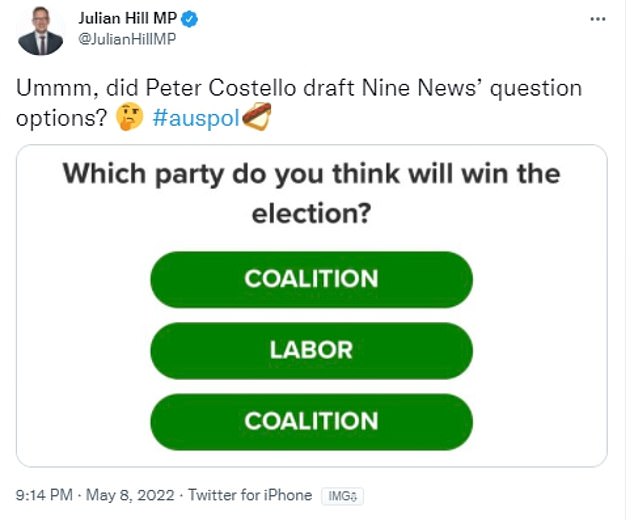 Channel Nine has been slammed over its coverage, including an online poll which listed the Coalition twice

Mr Hill wasn’t the only viewer claiming the poll may be rigged.

‘Was pressing Labor for over a minute, decided to record and tap a few more times – nothing. Clicked Coalition for a gag, and as I went to click it again it worked immediately. Uh, rigged? #LeadersDebate,’ one woman tweeted.

Others complained about the online voting system being broken, forcing the network to address the technical glitch on-air and on its live blog.

‘Due to exceptionally high traffic some of you may experience issues with voting in our poll. Keep refreshing and you will get your chance to have your say,’ the network posted on Twitter.

A furious voter responded: ‘The poll on your website was completely broken. Complete amateur hour run by airheads.’

A question from panellist Deborah Knight also went viral after telling Mr Albanese a lot of voters still don’t know who he is.

‘I had a listener Mario contact me this week to say you used to be radical socialist but just because you have a new set of glasses, how can we believe that you’re a reformed man? That’s Mario, what do you say to him,’ she asked.

The question left perplexed viewers wanting to know who Mario was.

‘Who the bloody hell is MARIO? That is complete rubbish an unknown bloke makes a statement and that is a question?’ one voter tweeted. 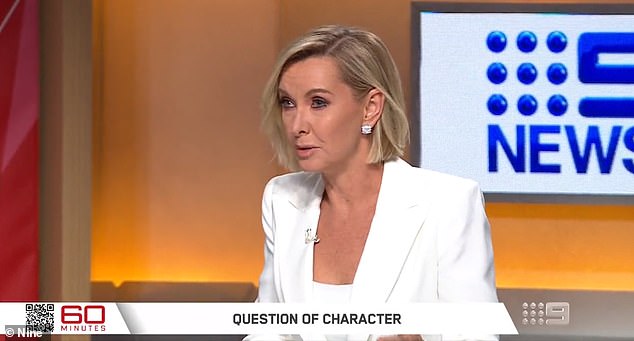 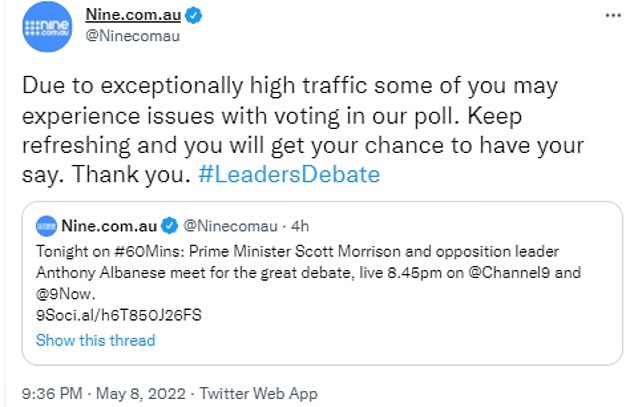 Another added: ‘Who is Mario ? I’ve changed or refined some of my views as I’ve grown, developed and matured, I’m sure Albanese (and others) have too. Why ask that question!”

Many viewers were left disappointed at the lack of mediation which saw the two leaders shout over the top of each other on a number of occasions.

‘This stupid LeadersDebate is a s*** storm. Scott Morrison is just shouting over Albo. It’s ridiculous. What are the rules here? A free for all? He who shouts loudest is heard? He who interrupts more is right?’ one man wrote.

Another wrote: ‘After this ‘performance’ I question why channel 9 has a broadcasting license at all.’

Other disillusioned viewers switched off.

‘The standard was so poor I have turned it off. This is a farce,’ one wrote. 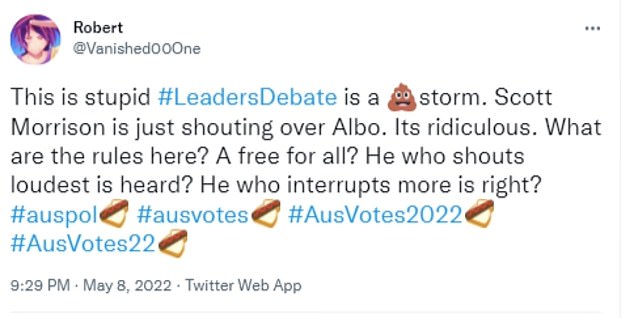 On national security, the Labor leader said the Solomon Islands’ new secret security deal with China amounted to a ‘massive foreign policy failure’ by the Government.

He also blasted Mr Morrison over the Northern Territory government leasing Darwin Port to a Chinese company in 2015 – which Mr Morrison defended by saying the Commonwealth Government had no say in the deal.

‘Your party, your tick off,’ Mr Albanese said before the PM responded: ‘You’ve been telling this lie for some time.’

That comment sparked a shouting match which host Abo helplessly failed to stop.

As she tried to moderate the debate, both leaders shouted over her, with Mr Morrison saying ‘it’s a very important point’. 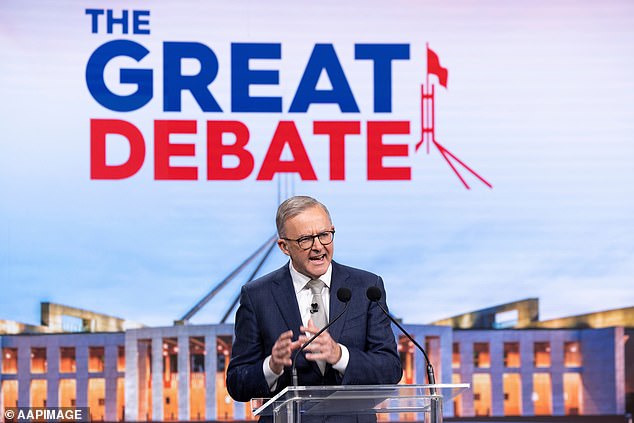 The Prime Minister savagely blasted his opponent in a high-tempered brawl over their policies on a federal anti-corruption commission which Mr Morrison has failed to deliver.

He said Mr Albanese had not even tried to come up with his own version of a corruption commission after rejecting the Coalition’s model.

‘Do you have draft legislation for the commission,’ Mr Morrison asked his opponent.

‘You have put forward a private members bill. So you can but you have not done one for this proposal you are excited about. You don’t have any plan.’

The pair talked over each other as Mr Albanese replied: ‘I will tell you what the plan is, it is one you don’t like.’

The Prime Minister interjected: ‘Where is it? You have been hiding in the bushes for three years.’

In another tense moment Mr Morrison was quizzed on why he has not campaigned alongside moderate Liberals who face challenges from ‘teal’ independents in Melbourne and Sydney.

Mr Albanese told the PM: ‘You can’t even campaign with your Treasurer’ before Mr Morrison snapped back: ‘I was with him today. You cannot make stuff up, mate’.

In the early stages of the showdown Mr Albanese slammed the Prime Minister’s plan to ease pressure on households with one-off additional tax relief for low and middle income earners and the temporary halving of fuel duty until September.

The first fiery moment of the night came after Mr Morrison spruiked his Budget measures to ease cost of living pressures.

Mr Albanese replied: ‘The problem with what Scott just said [is that] the cost of living measures that he spoke about are all temporary.

‘They have all the sincerity of a fake tan – they disappear once people have cast their vote and people are back on their own again.’