Chaos as brawl breaks out after controversial Leeds’ opener

CHAOS AT ELLAND ROAD! Leeds play on despite Villa injury and score which sparks red-card brawl… before Bielsa (who squared up to Terry on the bench) instructs his OWN team to concede which starts another bust-up when one of his players disagrees!

A chaotic few minutes at Elland Road saw two goals and a red card as a brawl broke out between Leeds and Aston Villa players.

When Jonathan Kodjia went down injured, half of the Aston Villa players appeared to stop, expecting Leeds to kick the ball out. However, they played on and Mateusz Klich went on to score, infuriating the Villa players.

In the ensuing melee, an Aston Villa player was sent off. Then, bizarrely, Leeds boss Marco Bielsa ordered his players to let Villa score an equalising goal straight after kick off. 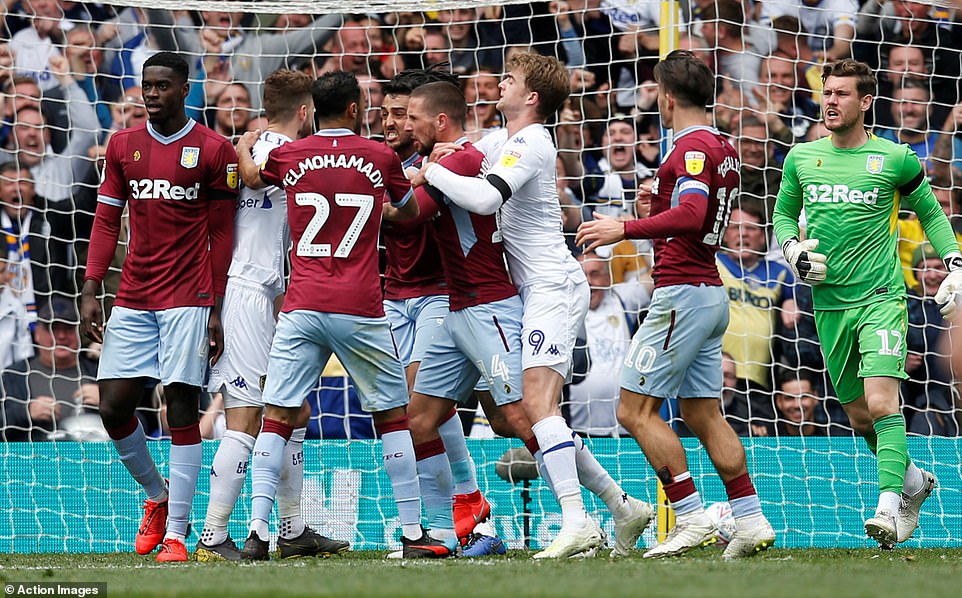 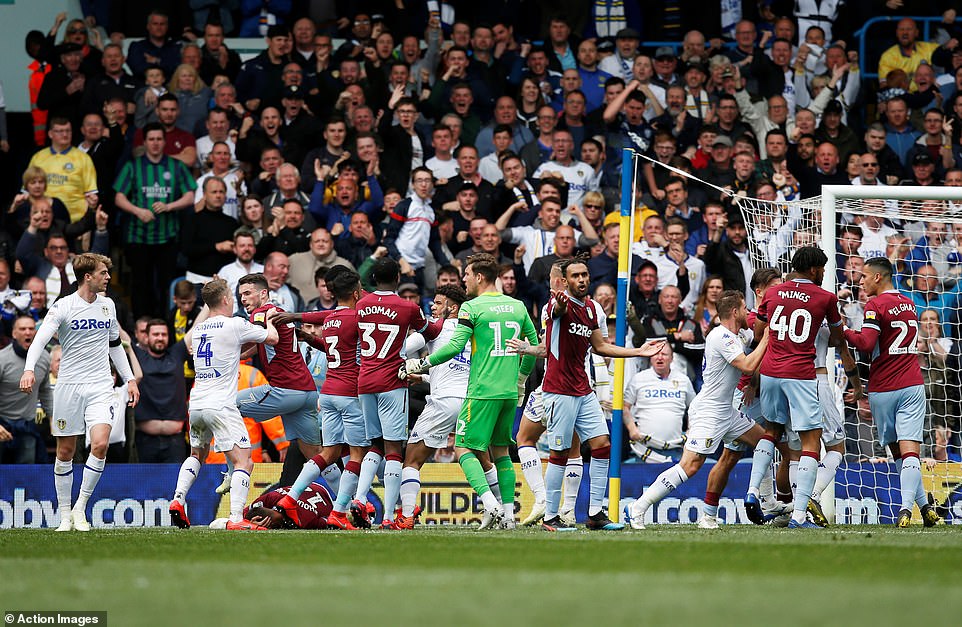 Nearly all the players got involved, and some stewards came onto the pitch to intervene 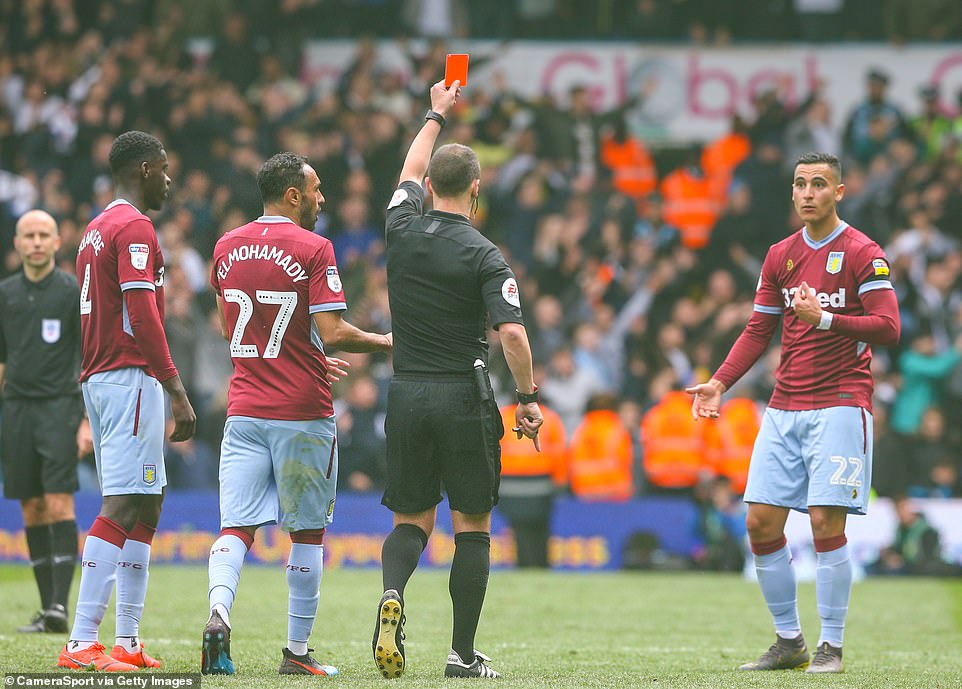 The most controversial goal of the season, bar NONE! 😲

Leeds United score whilst Aston Villa’s Jonathan Kodjia is down injured  🤕
A mass brawl kicks off! 👊
Anwar El Ghazi gets sent off 🔴 pic.twitter.com/BHbLhr2uGb

After scoring his controversial goal, Klich was grabbed almost instantly into his celebration, resulting in all players rushing in.

Aston Villa were furious that Leeds decided to play on despite the player being down. However they would argue that Jonathan Kodjia didn’t have a head injury.

As the players brawled, Patrick Bamford fell to the ground holding his face after Anwar El Ghazi swung an elbow in his direction, although there appeared to be minimal contact.

Confusion abounded as Attwell conferred with both his assistants, while the two benches and players were involved in heated debate.

The most incredible scenes we have EVER seen! You need to see this to believe it 😲

El Ghazi received a red card for his role in the brawl, which caused yet more drama on the sidelines as Leeds boss Marco Bielsa and Aston Villa assistant manager John Terry exchanged words.

Whatever they discussed seemed to affect Bielsa, who then barked orders from the touchline while the players lined up for kick off.

Leeds allowed Villa to run through unopposed when the game finally resumed – all apart from Pontus Jansson, who tried to halt Albert Adomah as he ran through to score.

The goalkeeper allowed the ball to trickle into the net, and then more heated words were exchanged between players. Jansson seemed to be disagreeing with his manager’s decision while his team-mates tried to calm him down.

Conor Hourihane and Patrick Bamford also received yellow cards for their roles in the controversy.

The game ended up as a 1-1 draw, with both goals going down as a couple of the most controversial of the season. Both Leeds and Aston Villa will be in the playoffs to try and secure promotion to the Premier League. 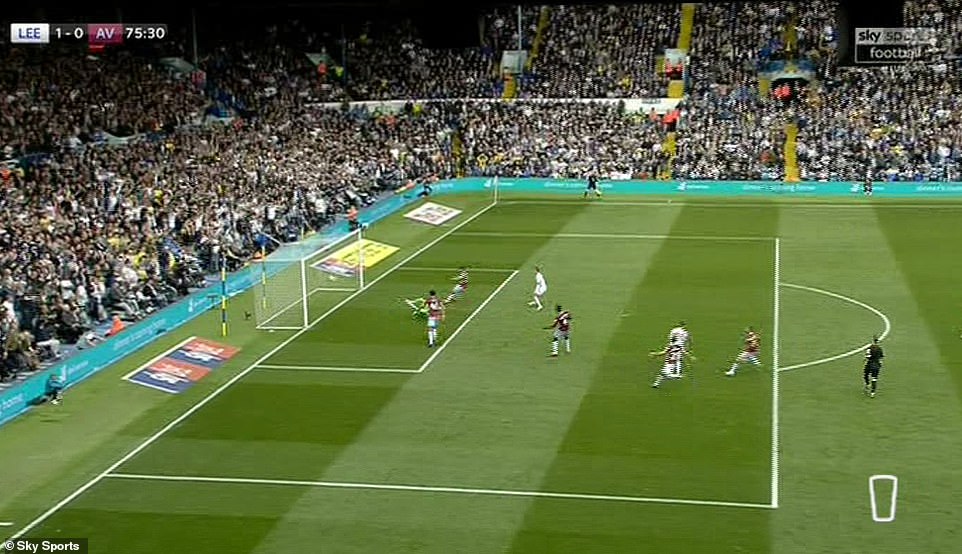 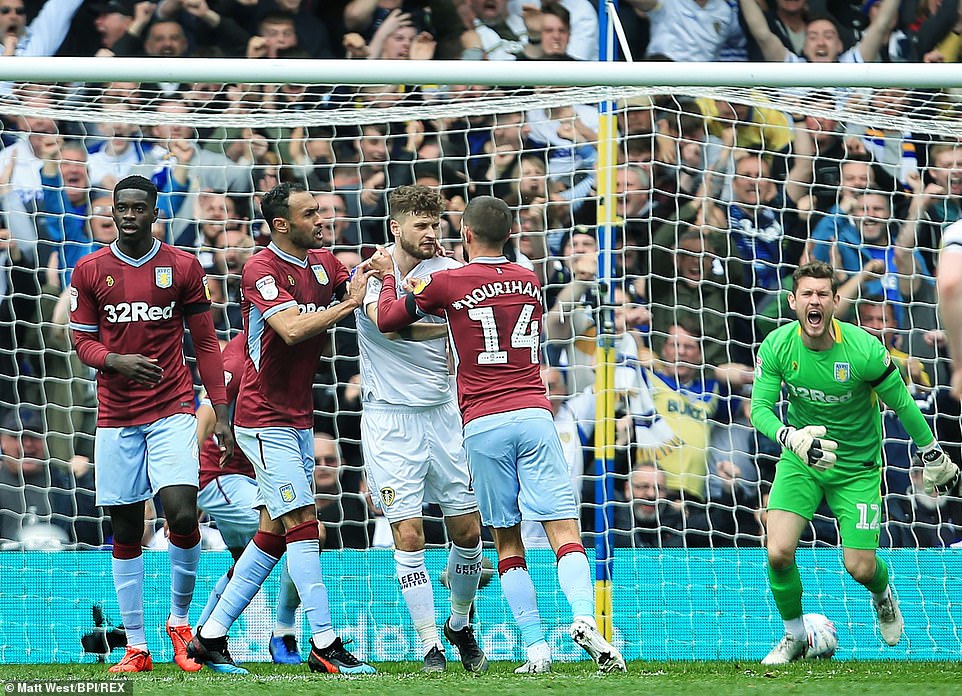 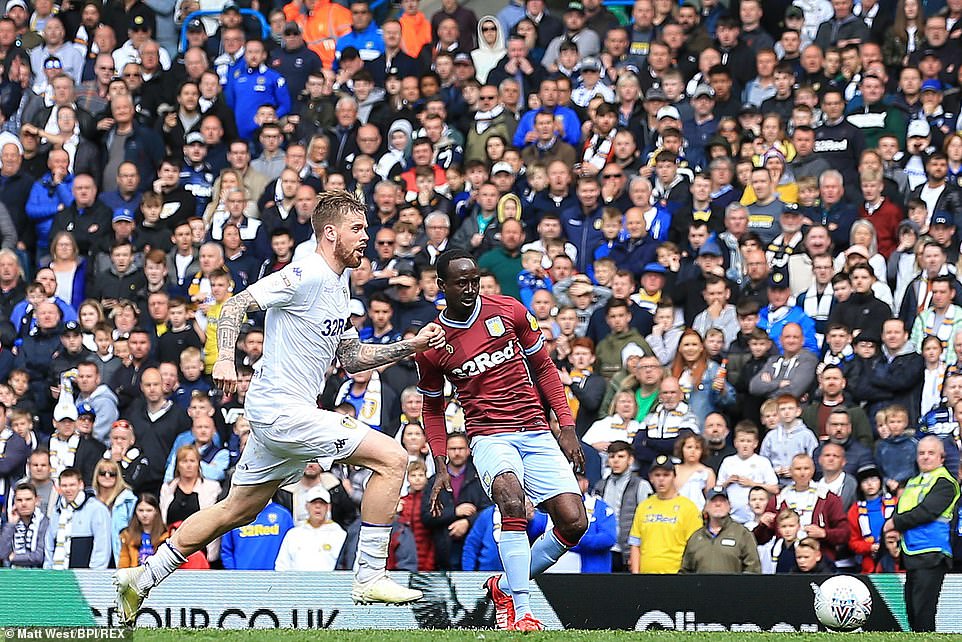 Villa defender Tyrone Mings admitted it was a ‘brilliant’ game to play in and praised Leeds boss Bielsa for insisting that Villa should be allowed to even things up.

‘We were disappointed because we kicked it out for them (earlier in the game), they were saying “oh well it wasn’t a head injury”, but fair play to their manager for saying we could go and score a goal,’ Mings told Sky Sports.

‘It evened itself out, it was disappointing but that’s football.’

Mings sympathised with Jansson wanting to go against his manager and deny Villa the equaliser.

‘Of course (I understand what he did),’ he added. ‘I don’t know if I would do the same but I would probably feel the same.’

Leeds head coach Bielsa told Sky Sports: ‘We gave the goal back. The facts are what everyone saw.

‘English football is known for sportsmanship so I don’t have to comment on this kind of thing, which is common in England.’ 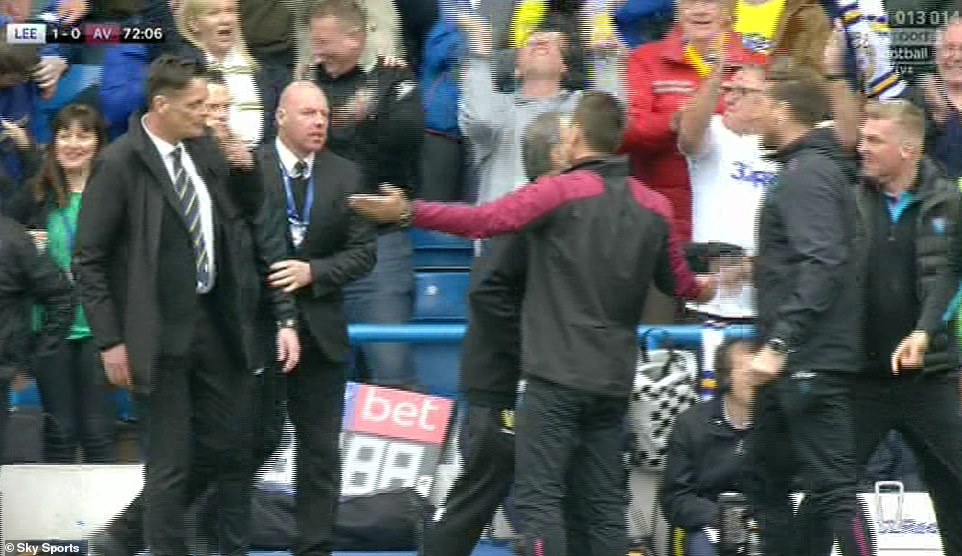 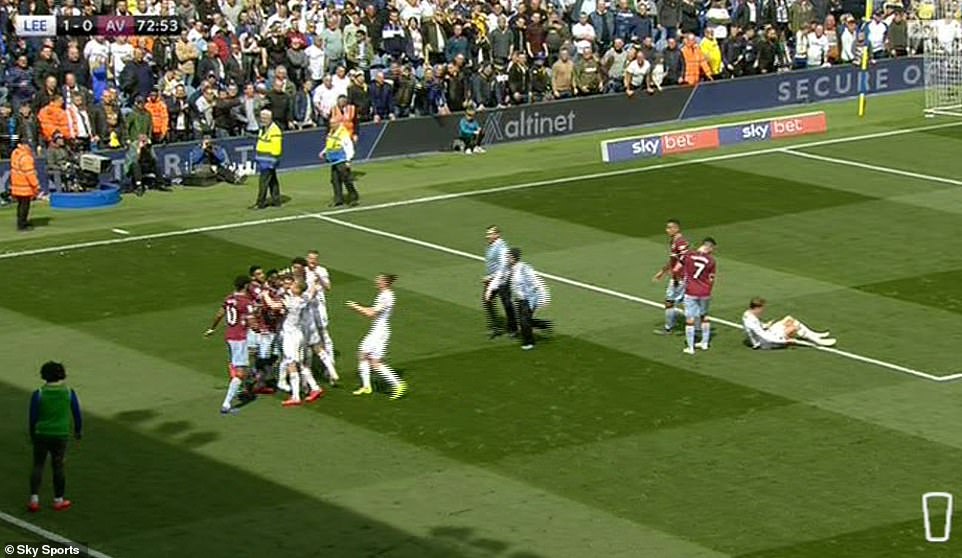 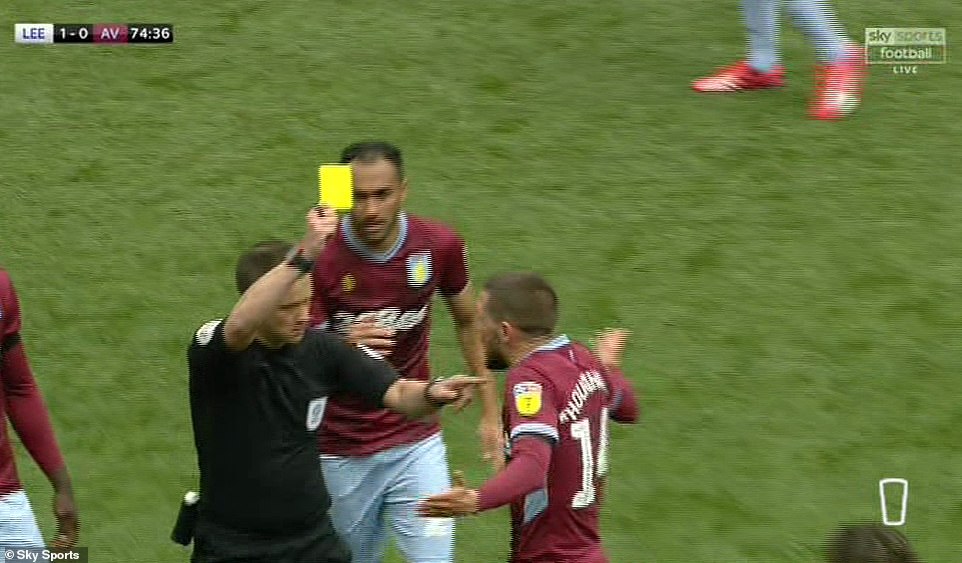 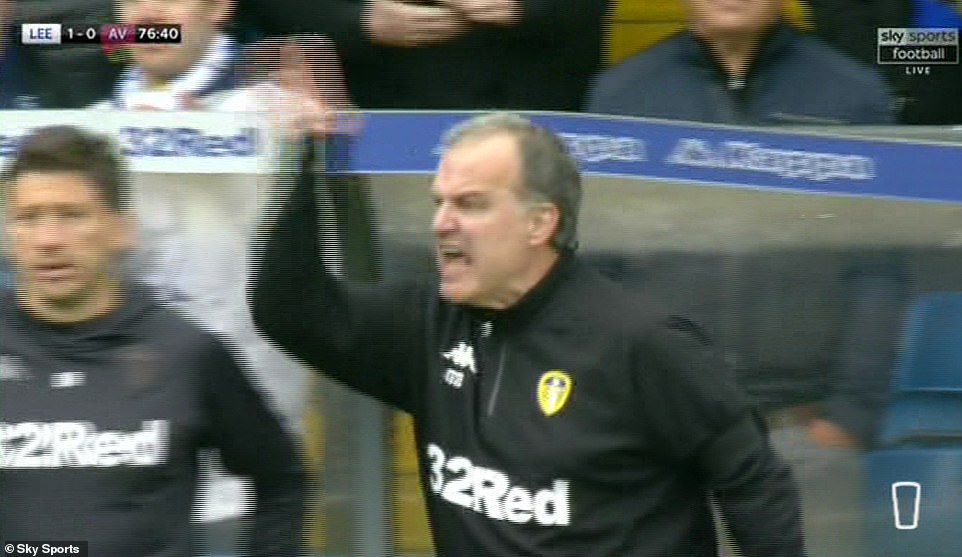 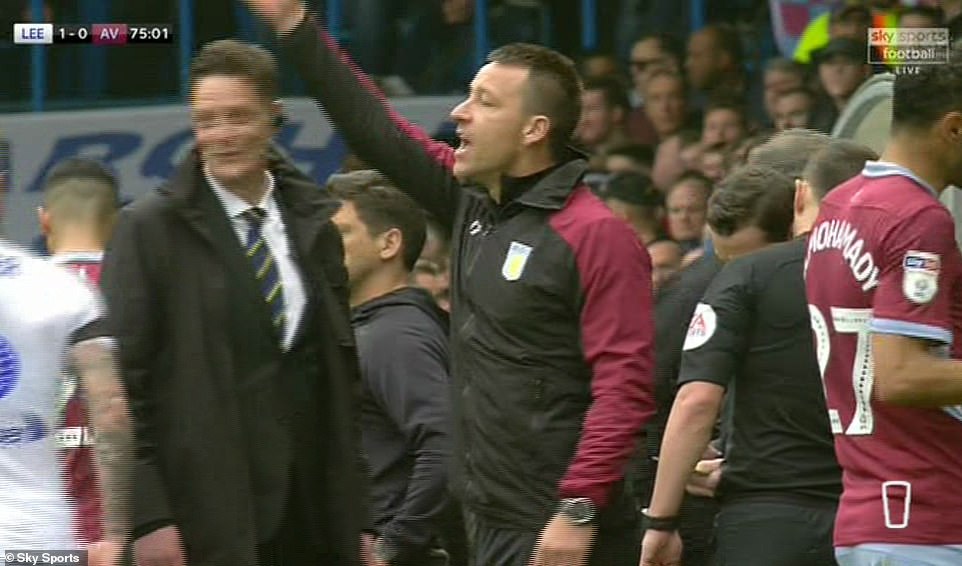