The horrific moment a ‘routine arrest’ at a Sydney pub turned into a violent stabbing of a policeman and the subsequent shooting of his attacker was caught on camera by a terrified patron.

The confronting video of the immediate aftermath reveals how the busy bar was sent into complete panic.

Customers can be seen rushing towards the beer garden where the officer laid, suffering from stab wounds to the chest and abdomen.

Detective Sergeant John Breda, 45, went down after being stabbed by wanted sex offender Nick Newman twice during a routine arrest at the Maroubra Junction Hotel on Australia Day

‘F*** me dead there’s a copper down mate,’ one man can be heard saying in the clip released by Nine News, with another adding, ‘he’s been shot’.

The attack launched crowds into full hysteria as some rushed towards the scene, while others evacuated the area.

An officer can be heard yelling ‘do not move’, while another firmly instructs onlookers to ‘call an ambulance’.

Groans of a man in obvious agony can be heard, while another male is pictured laying on the ground, understood to be making attempts to stop bleeding. 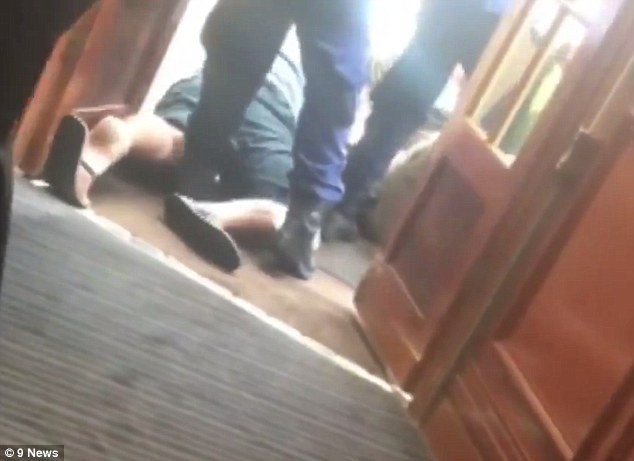 One panicked patron can be heard saying, ‘F*** me dead there’s a copper down mate,’ with another adding, ‘he’s been shot’ 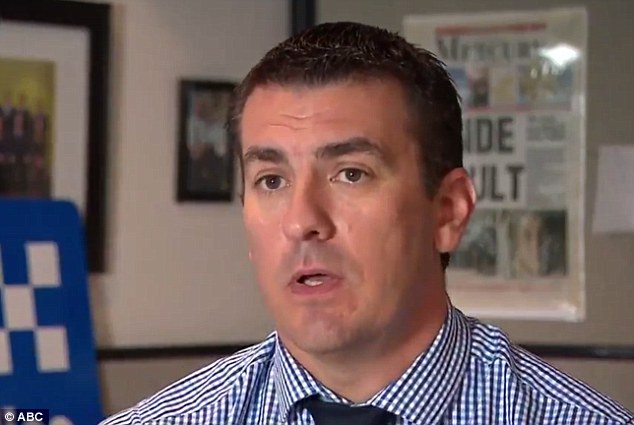 Groans of a man, believed to be the injured officer (pictured), in obvious agony can be heard, while another male is pictured laying on the ground trying to stop the bleeding

Witness, Oliver Lynch, was enjoying a beer and a cigarette in the garden when the drama unfolded.

‘They were holding his stomach…rolling around. I was kind of in a small bit of shock,’ he said.

‘I was looking at him and there was people bringing tissues, the people who worked in the hotel, they were really good. They were putting pressure on (the injuries).’ 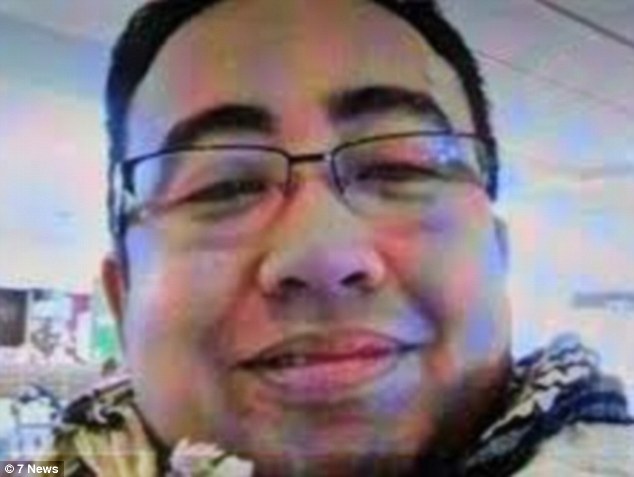 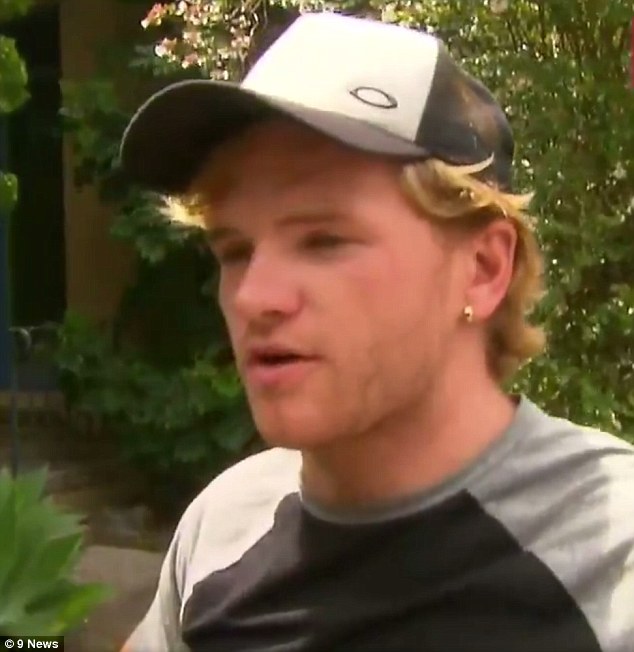 Witness, Oliver Lynch (pictured), was enjoying a beer and a cigarette in the garden when the drama unfolded

‘And then just like that, there was about a hundred cops storming the building.’

The father-of-two underwent emergency surgery at St Vincent’s Hospital as his devastated wife, Kim, arrived to be by his bedside under police escort.

Acting NSW Police Commissioner Dave Hudson visited Sgt Breda in hospital on Saturday and said he is in a ‘very serious but stable condition’.

Newman reportedly failed to appear in court on Wednesday and police sent out a public appeal to find the man.

He was facing six counts of rape against a teenage girl, who Nine News understood he had also gotten pregnant. 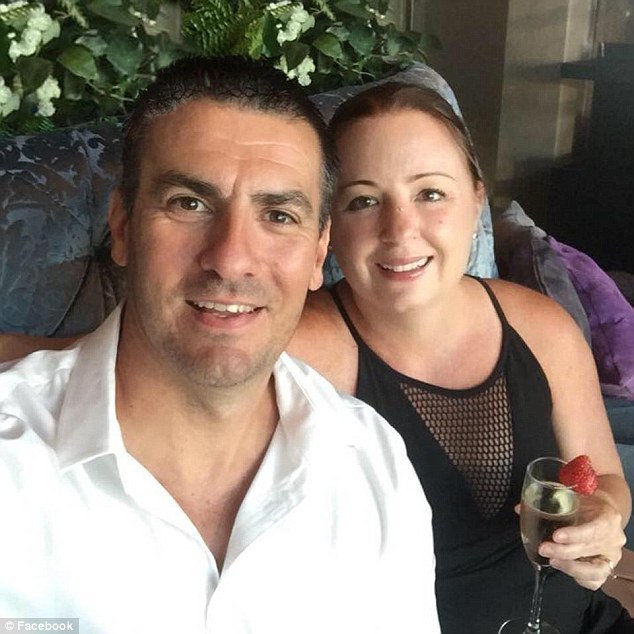 The loving father and decorated detective John Breda, 45, (left) is fighting for life in hospital after he was stabbed twice by wanted sex offender Nick Newman 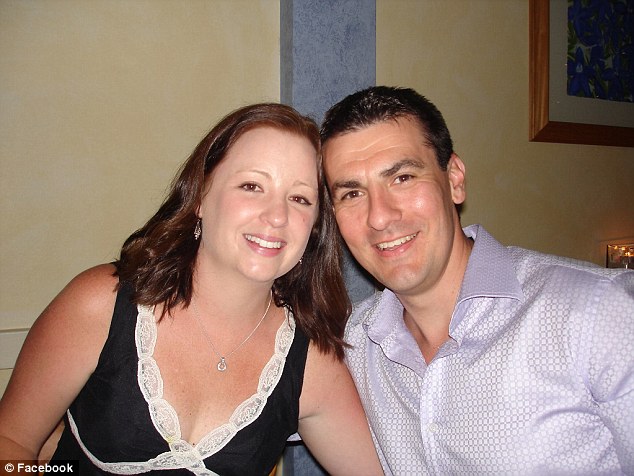 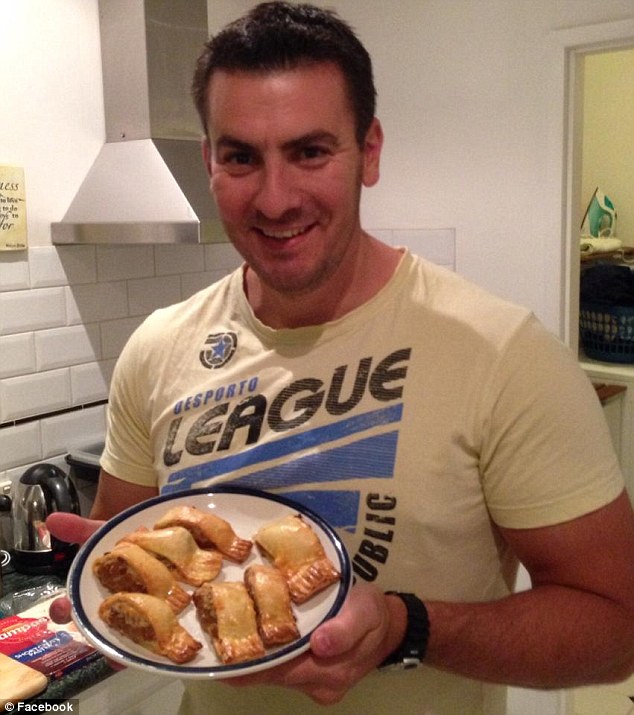 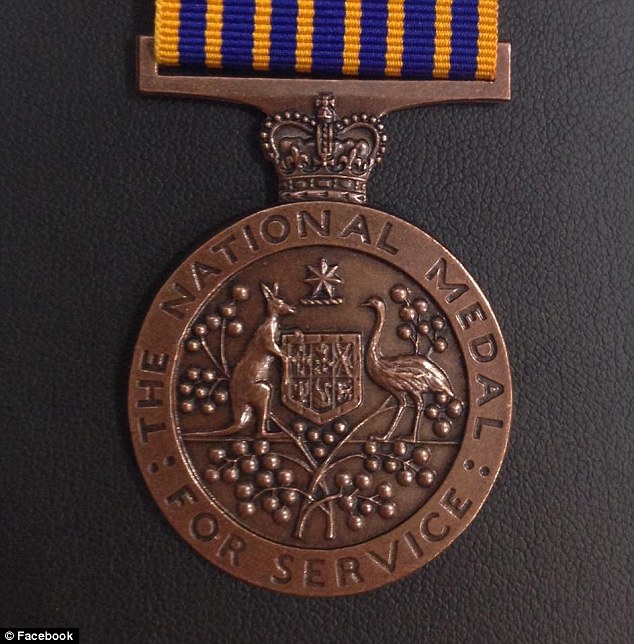 The veteran of the Child Abuse and Sex Crime Squad was awarded the police force’s highest honour in 2015, the National Medal (pictured) by the Prime Minister

Obviously we are not medical experts but we have spoken to them,’ he said.

‘They are comfortable with his progress so far however he is by no means out of danger.’

Sergeant Breda is a veteran of the Child Abuse and Sex Crime Squad has spent time in the Middle Eastern Organised Crime Squad and was awarded one of the police force’s highest honours.

In 2015, the 45-year-old was given the National Medal by the Prime Minister.

Assistant Commissioner Mark Walton said a lot of people were concerned about the senior officer as he is ‘very well regarded’.

‘We’re certainly very concerned about his condition and our thoughts are with him and his family,’ he said.

Daily Mail Australia understands during the violent arrest, Newman cut his own throat with a knife before being fatally shot, where witnesses said they heard four or five gunshots. 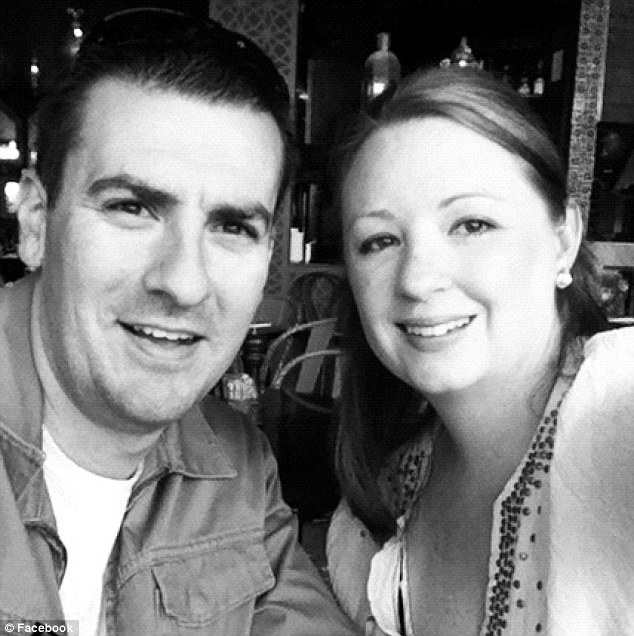 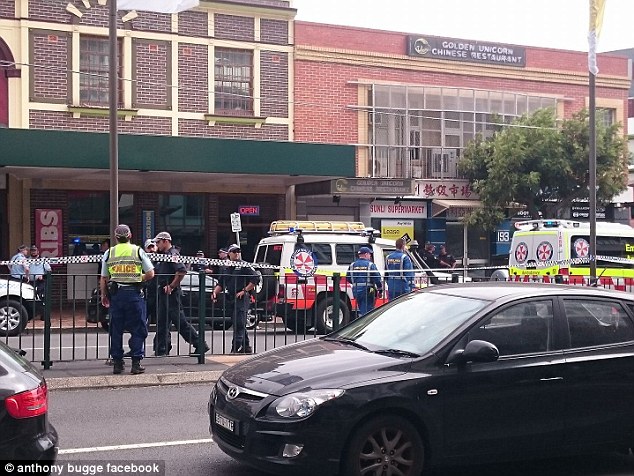 The hero detective was stabbed by Newman, who was then shot dead at a pub in Sydney 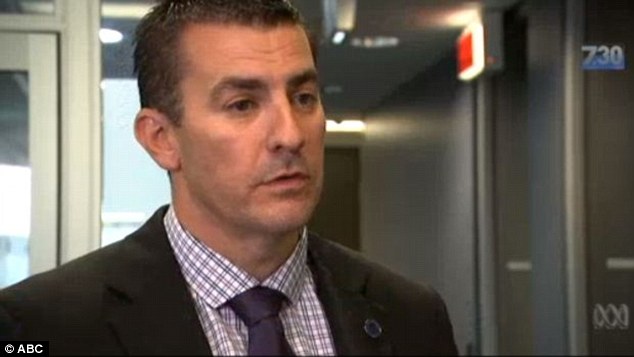 Sergeant Breda (pictured) was stabbed in the beer garden before two other police officers fatally shot Newman ‘four or five’ times, according to witnesses 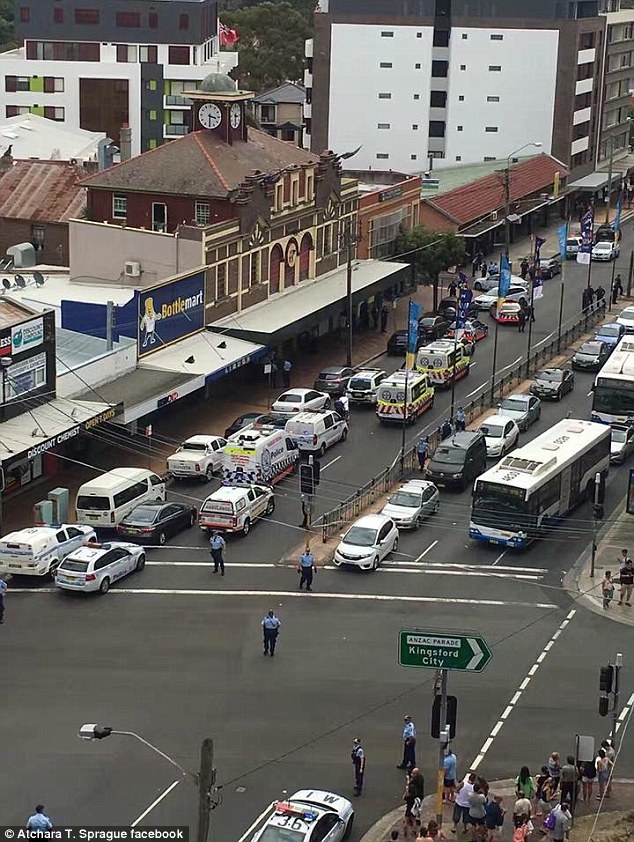 A dozen police cars and ambulances rushed to the scene on Anzac Parade, shutting down area 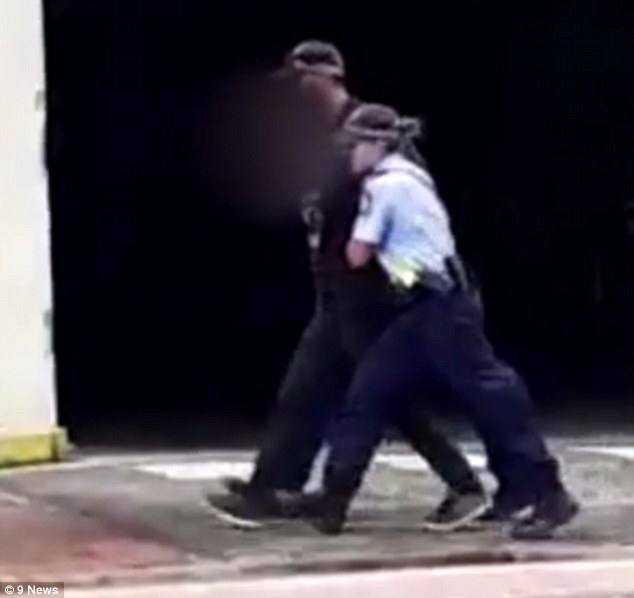 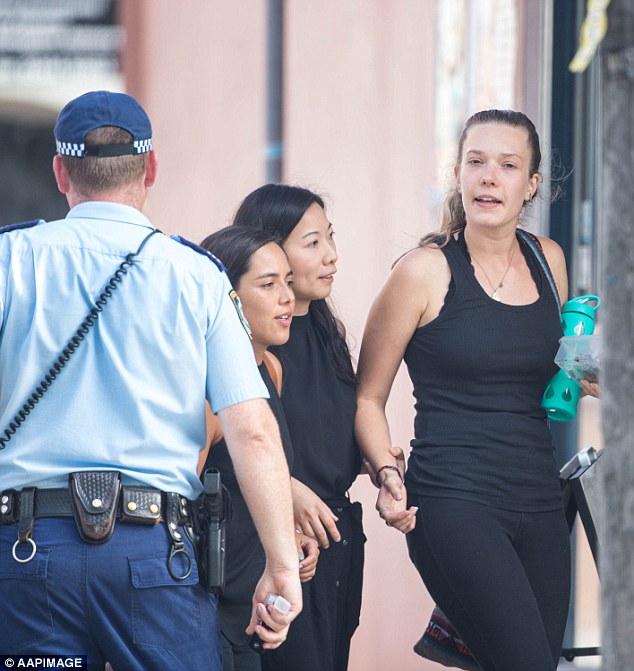 Another video shot by a witness at the scene showed officers with guns draw at a back entrance to the pub, before entering in combat stance.

‘Our friends were inside and we heard the shots so we hurried to see what was going on. There was blood everywhere,’ Mackenzie Gibbs said. 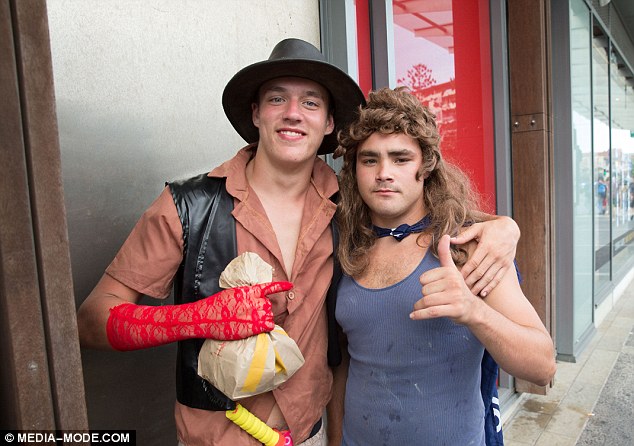 ‘Our friends were inside and we heard the shots so we hurried to see what was going on. There was blood everywhere,’ Mackenzie Gibbs (left) told Daily Mail Australia 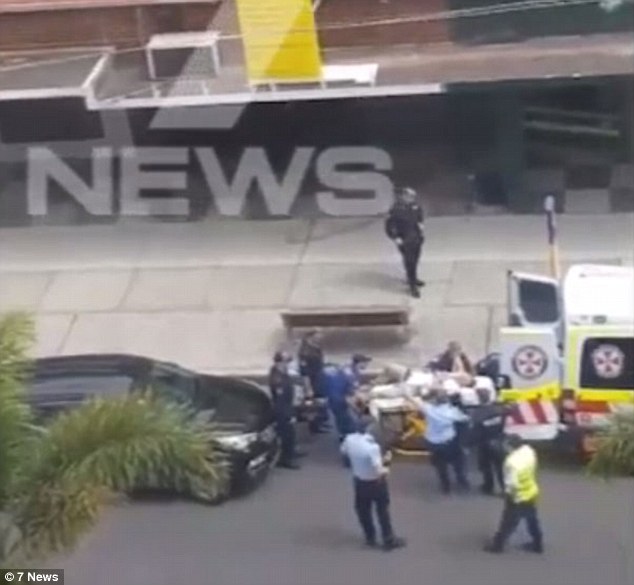 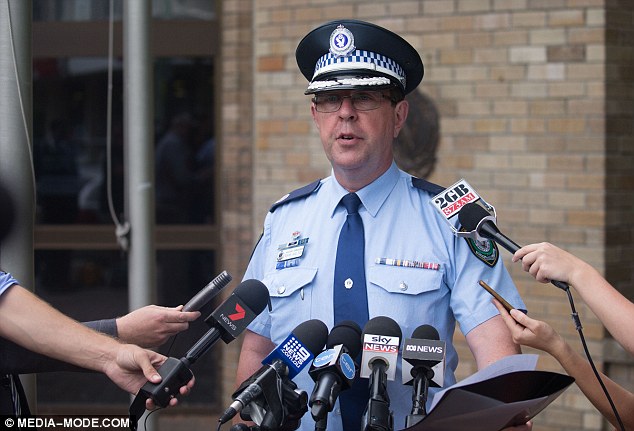 Another man was seen being marched away from the pub by police but it was not clear why he was arrested.

At least 20 police officers locked down the area, putting up tape and telling nearby businesses to close.

Sales assistant Lara Alexander was working at the nearby Pharmacy 4 Less when she heard ‘four or five’ gunshots.

‘I was vacuuming here at work and I heard gunshots from a couple of doors away. About four or five,’ she told Daily Mail Australia. 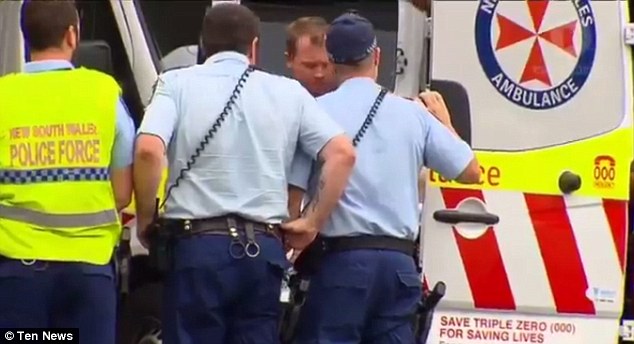 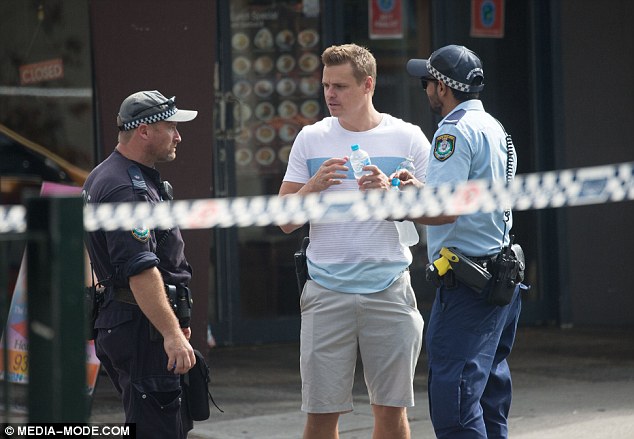 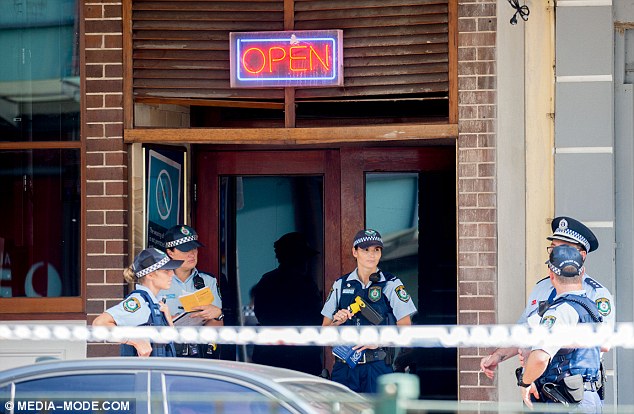 At least 20 police officers locked down the area, putting up tape and telling nearby businesses to close 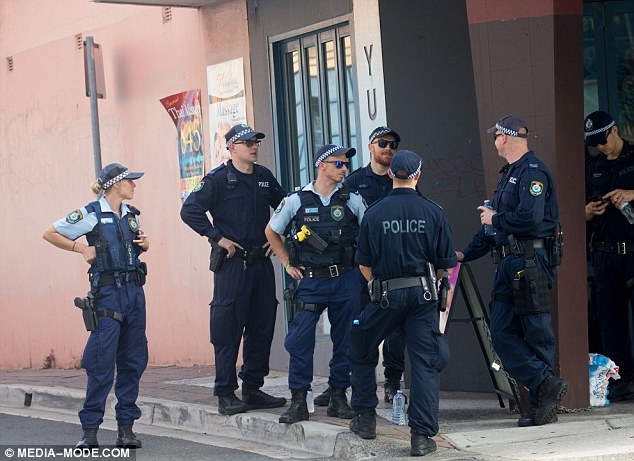 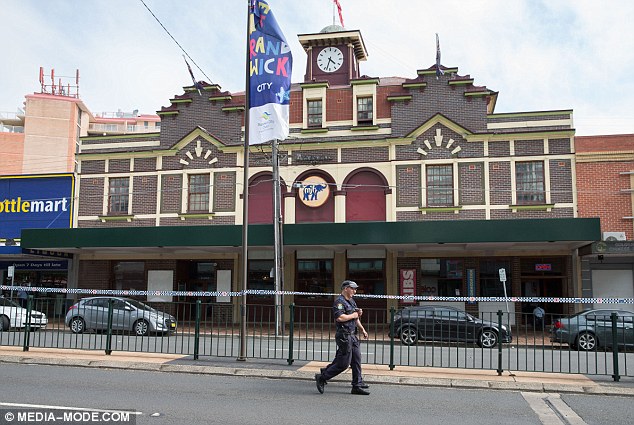 ‘I went outside and there were three or four ambulances and a whole bunch of police cars.

‘And then I saw someone on a stretcher come out of the pub and another guy in handcuffs.’

Noel Whelan has been staying at the Maroubra Junction Hotel for a few months and was shocked when he was ushered out and into the street this afternoon.

Mr Whelan said he saw the police officer being brought outside and he ‘didn’t look very comfortable at all’. 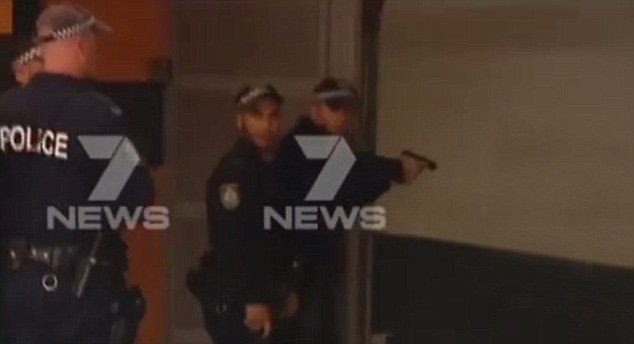 Dramatic video shot by a witness at the scene showed officers with guns draw at a back entrance to the pub, before entering in combat stance 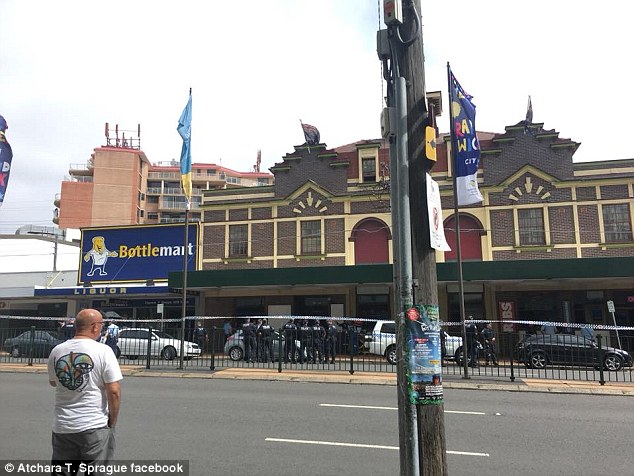 Large number of police congregate outside the Maroubra Junction Hotel

‘I knew something was wrong when the police came pouring in. There were sirens coming from everywhere,’ he told Daily Mail Australia.

‘I heard what could have been a muffled gunshot but didn’t think anything of it until I went down stairs and there were police everywhere.’

Mr Whelan stays in Maroubra for six months every year and is saddened by the incident.

‘I just want to get back to Europe. I didn’t expect anything like this to happen in Australia especially not in Australia Day.’

The homicide squad will now investigate all circumstances surrounding the incident, including the officers shooting the attacker, police said.

The investigation will be independently reviewed and a report prepared for the coroner.

‘My thoughts and prayers are with the family and colleagues of the NSW Police officer injured in Maroubra this afternoon,’ NSW Police Minister Troy Grant said.

‘Thank you to the team at St Vincent’s who are caring for him now.’ 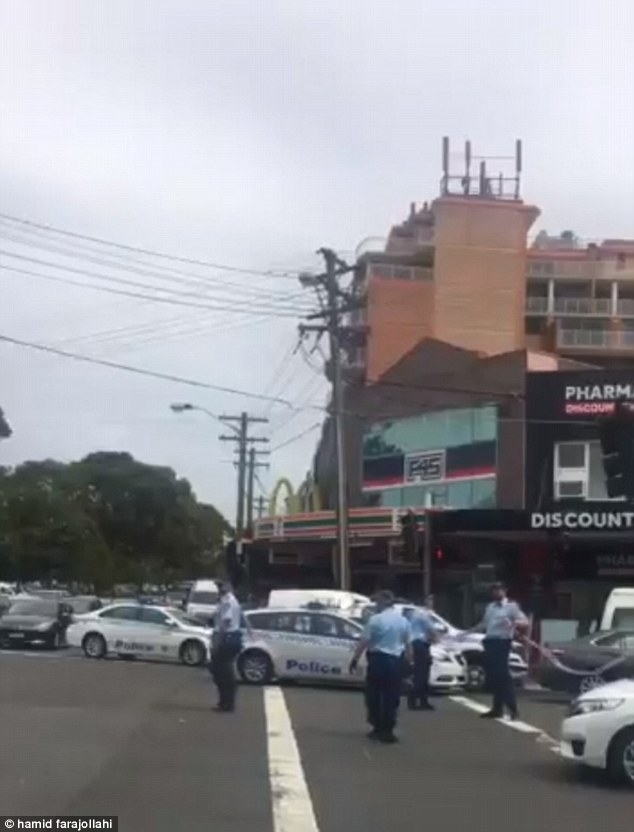 The officer was stabbed multiple times in the chest about 3.10pm at the Maroubra Junction Hotel on Anzac Parade