A group of soldiers received the shock of their lives when a menacing goose charged towards them and sent them running for cover.

The hilarious incident was caught on tape at the Fort Sill, Oklahoma base on Tuesday.

The goose, named Steve, is a part of a family of geese that flock around the base, who suddenly turned hostile in a display to protect its territory.

Angry bird! A group of soldiers in Fort Sill, Oklahoma were caught on tape running away from an angry goose on their base 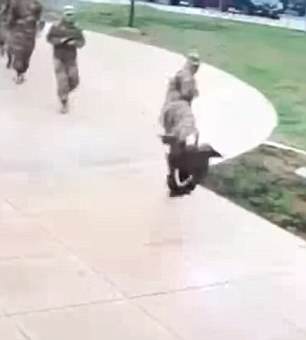 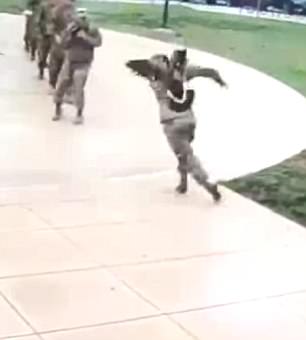 The hilarious clip sees the bird named Steve, who lives on the base, charge towards a soldier, causing him to bolt in the opposite direction in fear

The clip sees a file of soldiers walk towards the entrance of a building when the goose waddles towards the group with surprising speed then spreads its feathers and moves its neck, threatening a bite.

The charge scared off the soldier leading the line, causing him to cower in fear and turn to bolt in the opposite direction, as the goose began to fly towards its head.

Regaining confidence the soldier threateningly moves his hands in fake punching movements before running towards the building entrance.

The other soldiers timidly trail behind him, keeping an eye on the bird. 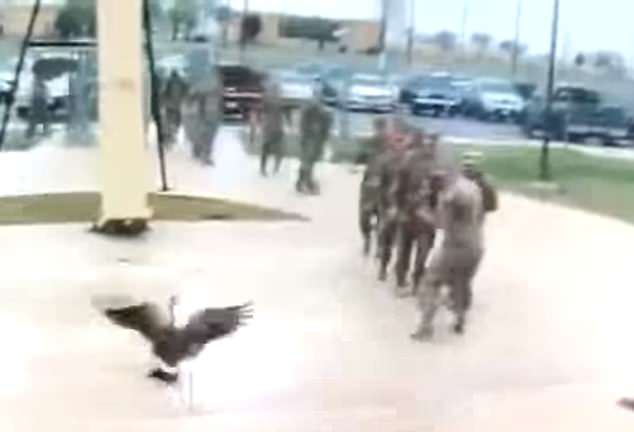 Stay away! The bird menacingly spread its wings and bobbed its neck in an attempt to mark its territory, causing the file of soldiers to cower in fear 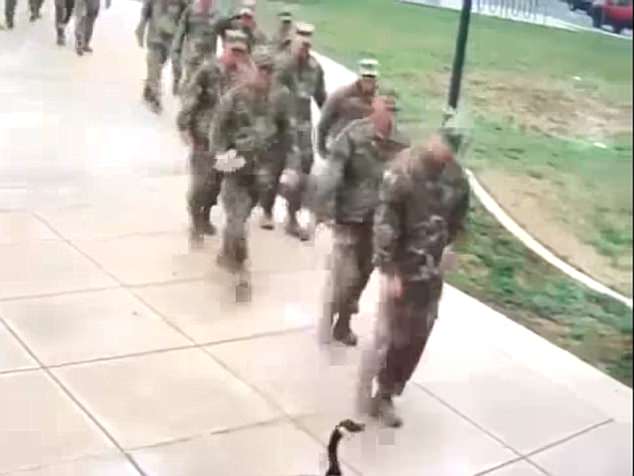 The soldiers timidly moved towards the entrance, keeping an eye on the angry bird 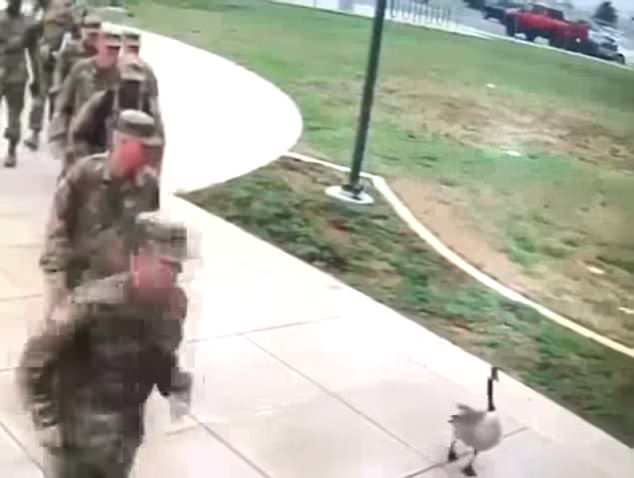 At last the bird allowed them to pass, but not without angrily quacking at the passing officers

After a few soldiers pass Steve then begins to quack at other officers, menacingly bobbing its neck.

Narrarators watching the clip can be heard laughing and saying ‘Yeah, I kept trying to tell him don’t stop. Just keep walking’.

‘A family of geese that we named Steve and Brenda frequent our building here. Steve has been very protective lately of the best and attacked a group of Soldiers,’ a caption with the video clip said.

‘Soldiers being the tough guys got totally punked. This will happen daily and I can upload way more videos! The goose was not harmed. We actually take good care of them and give them food and extra hay for their nest,’ the caption added.