Charity donators have fallen to below a third of the population

The number of people who give money to charity once a month has fallen below a third, new figures showed yesterday.

Only 32 per cent of the population said last year that they had donated to a charity over the previous four weeks, a level that dropped below the 33 per cent floor recorded in 2017.

And the overall fall in numbers who pay for charities was even greater because of a decline in sponsorship for people taking part in charity events, a large survey found.

It said that when direct donations and sponsorship are counted together, the share of people who contributed dropped from 39 per cent in 2016 to 37 per cent last year.

The survey, carried out among 12,000 people by the Charities Aid Foundation, followed a series of scandals over fundraising methods used by big charities. In 2015 the Mail disclosed how the NSPCC, the British Red Cross, Oxfam and Macmillan were using outrageous ‘boiler room’ tactics to raise cash.

Firms paid by them were regularly contacting homes on the official ‘no-call’ list meant to spare vulnerable and unwilling people from being targeted. They were also prepared to take money from those who revealed they had dementia.

There has also been widespread revulsion over the used of ‘chugging’ gangs who waylay people on High Streets and try to persuade their targets to sign up to hand over regular bank payments. 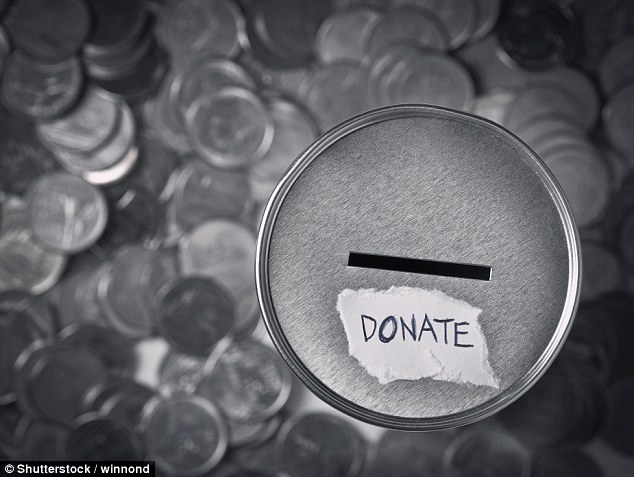 Althought the total amount of donations rose above the £10 billion mark during 2017, the number of people donating were fewer

It was taken before the scandal this year over sexual exploitation of disaster victims and employees by senior executives of Oxfam and other major international charities.

The total of donations rose above the £10 billion mark during 2017, £9.7 billion to £10.3 billion, but the money came from fewer people, the Foundation said.

Its chief Sir John Low said: ‘We see that although total donations are slightly up, the number of people giving has fallen. It is far too soon to tell if that represents a trend, but we need to be careful if giving becomes concentrated in fewer, larger donations. This is something we will monitor carefully.’