‘I really wish Joe Biden would shut the f up forever and continue to act like he’s starring in the movie A Quiet Place, because as soon as he opens his mouth and makes noise he gets us all killed,’ the 42-year-old radio show host of The Breakfast Club lamented.

While President Trump has come under fire for his handling of Black Lives Matter protests and his comments toward minority communities, several other presidents before him have supported segregation, Jim Crow laws and owned black slaves.

Charlamagne also blamed Biden for creating an environment where people are considering voting for rapper Kanye West, who launched his presidential campaign earlier this month.

‘You know America is in a terrible place when Kanye West seems like a viable option, OK?’ Charlamagne laughed. ‘America we need a change. I don’t know how we ended up in a position where in November we have to vote for two old white males, again.’

He held a rambling rally in South Carolina earlier this mouth where he broke down in tears when talking about abortion and claimed he wanted wife and pop culture icon Kim Kardashian West to terminate his first child’s pregnancy.

Charlamagne also lashed out at Biden for claiming Trump was the first racist president.

He also lashed out at Biden for claiming Trump was the first racist president.

‘Saying Donald Trump is the first racist president is a lie, ok? It’s a lie that relinquishes America of all responsibility of its bigotry,’ he said. 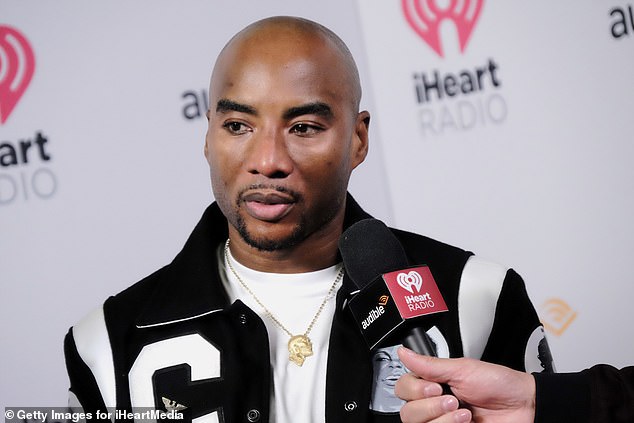 The 42-year-old Breakfast Club radio show host asserted: ‘Saying Donald Trump is the first racist president is a lie, ok? It’s a lie that relinquishes America of all responsibility of its bigotry.’ And demanded that Biden: ‘Shut the f up forever’

During a virtual town hall on Wednesday, organized by the Service Employees International Union, Biden made the claim in asserting Trump has used race to further divide Americans.

‘The way he deals with people based on the color of their skin, their national origin, where they’re from, is absolutely sickening,’ Biden said. ‘No sitting president has ever done this.’

‘Never, never, never. No Republican president has done this. No Democratic president,’ he continued. ‘We’ve had racists, and they’ve existed, they’ve tried to get elected president. He’s the first one that has.’

Charlamagne asked after replaying the comments: ‘How are we ever going to atone for American’s original sins if we don’t acknowledge them?’

He also used one of Biden’s slogans in claiming it is ‘malarkey’ that to call Trump the first racist president – as he pointed to several instances where previous presidents have owned slaves.

‘How the hell can Donald J. Trump be the first racist president in a country where 12 presidents before him owned slaves? Whatcha going to tell me, slavery wasn’t racist? It was just business?’ Charlemagne lambasted.

Biden, who served as former President Barack Obama’s vice president for both terms, has vowed to choose a black woman as his running mate.

Charlamagne, who is black, said Americans are tired of ‘old white-men’ leadership in federal government – Biden included – and claims it exacerbates racism in the country.

‘There’s already so many people who are reluctantly only voting for Joe Biden because he’s the only option and because Donald J. Trump is that trash,’ Charlamagne claimed.

‘The moral of the story is, people aren’t enthused about Biden, they just don’t like Trump,’ he said. ‘And that’s not good. That’s not a great motivator. That’s not something that makes you get up on election day and say, ‘Hey, I have to vote.’

‘And when Joe Biden says certain things he causes even more of a lack of enthusiasm,’ Charlamagne complained in another urge for the 77-year-old candidate to keep quiet.

According to a recent poll, among those who say they are casting their ballot for Biden in November only 30 per cent are excited about voting him into office, while 60 per cent claim they are more interested in casting a vote against Trump.

In that same poll, however, 70 per cent of those who are voting for Trump in November said they are enthused about casting their ballot for the incumbent.