Charles ‘determined to be silent’ in face of criticism

LOW PROFILE: Charles wants to avoid ‘being caught in a storm’

A series of bruising opinion polls has shown his popularity flagging.

But as the 20th anniversary of Diana’s death approaches this week, The Mail on Sunday understands that the Prince of Wales is determined to remain silent in the face of criticism.

With the south gates of Kensington Palace designated a makeshift memorial to his first wife ahead of Thursday’s anniversary, Prince Charles and the Duchess of Cornwall are to stay away from London and will make no statement.

Friends of the Prince suggest that he wants to ‘avoid being caught up in a media storm’ as the nation marks two decades since Princess Diana died in a car crash in Paris on August 31, 1997. Instead, he will devote himself to a campaign of official engagements.

Some commentators continue to criticise the Royal Family for its treatment of Diana throughout her troubled marriage and during the break-up.

However, there will be some solace for Charles in tonight’s much-anticipated BBC documentary, which focuses on the week after Diana’s death and features warm words from his younger son, Prince Harry.

Praising his father for looking after him and Prince William in the aftermath of their mother’s death, Harry, 32, says: ‘One of the hardest things for a parent to have to do is to tell your children that the other parent has died. But he was there for us, he was the one out of two left. And he tried to do his best to make sure that we were protected and looked after.’

Prince Charles will return to work next month with a typically busy autumn schedule, including a three-country foreign tour on behalf of the Government.

These tours are now, effectively, State visits because the Queen, 91, no longer carries out overseas trips.

Charles is also expected to accompany the Queen at the Cenotaph as they lead the nation in reflection on Remembrance Sunday – another significant step as he continues to assume more Royal duties.

The Prince and other senior Royals will be increasingly called upon to support the Queen at public engagements, now that the Duke of Edinburgh has retired.

…and what could her cad be thinking about? 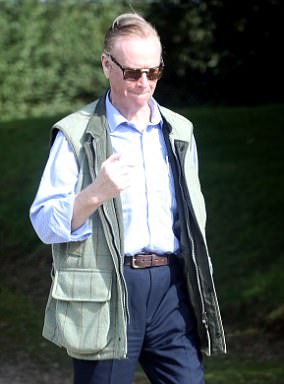 PENSIVE: James Hewitt out and about yesterday

Princess Diana’s former lover, James Hewitt, seemed absorbed in his own thoughts yesterday when he was spotted out and about near his home.

The former Army officer, who had a five-year affair with the Princess, could be forgiven for having a lot on his mind.

As well as the approaching 20th anniversary of Diana’s death, it was only a few months ago that doctors reportedly warned him he only had a ‘slim chance’ of survival after suffering a heart attack and stroke.

Hewitt, 59, was yesterday seen walking in a park near the two-bedroom flat he shares with his mother Shirley in Exeter.

Sitting on a wooden bench to fiddle with his mobile phone for a short time, he wore a thick green body warmer despite the sunny weather.

Indeed, The Mail on Sunday has learned that Charles has concluded that the example set by his mother is the best one to follow this week – keep calm, keep quiet and carry on. He was famously damaged by the televised interview he gave to Jonathan Dimbleby in 1994, in which he admitted infidelity, and is understood to be determined to avoid a similar experience.

Charles will now throw himself into official duties, including a naming ceremony for the Royal Navy’s £6.2 billion aircraft carrier HMS Prince of Wales at Rosyth on 8 September, and the three-country tour with Camilla, which is yet to be officially announced.

A recent poll suggested that just a third of Britons believe the Prince of Wales has been beneficial to the Monarchy, down from nearly two-thirds four years ago.

But Charles is said to be eager to continue his charitable work and attend the sort of local engagements that rarely attract national attention, believing that it is here that he connects with members of the public and the problems they face.