Charley’s an angel! Hull warms up for the Women’s Open by playing a round with Sportsmail

On Thursday morning, Charley Hull will tee off in the first round of the AIG Women’s Open alongside the world No 1 and girl of the moment, the brilliant Nelly Korda.

Before pitting her wits against the best swing in golf, she spent the eve of the championship alongside a playing partner whose technique warranted a rather different description – sadly, my own.

Now that’s what you call from the ridiculous to the sublime.

Can you imagine Lionel Messi warming up for the Champions League final kicking a ball with a podgy pub player? Or Joe Root taking deliveries on the final day before the Ashes from a lousy village cricketer?

If Hull fails to build on her fine fifth-place finish in the Scottish Women’s Open last week and has a bit of a stinker, three pro-am partners in the media centre might all be feeling just a tad responsible.

Hull, it should be said, was an absolute delight. A day before her biggest event of the season, you could hardly have blamed her if she had spent the four hours concentrating on honing her own game. 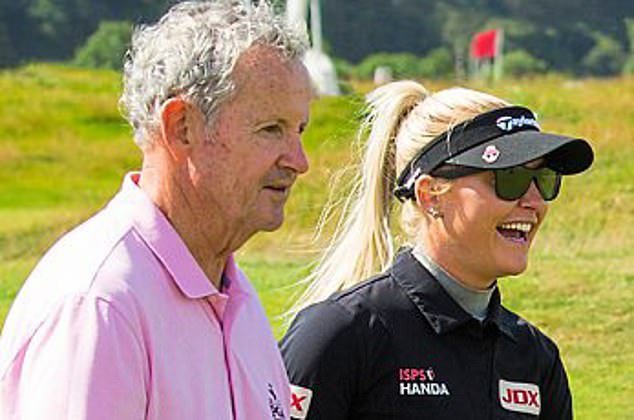 She spent the eve of the tournament playing alongside, and speaking to, Derek Lawrenson

That, though, is not her at all. She loved taking the mickey when we left putts short. When golfing freelance Matt Cooper gave a fist pump after getting a 20ft putt to drop, she almost fell over laughing. ‘What do you think this is, the Open?’ she screamed. It’s as near as we’ll ever get to it, that’s for sure.

Hull is barely recognisable from the player who looked a world-beater when she joined the women’s tour. At 25, she’s the epitome of the modern golfing athlete.

The one thing that hasn’t changed is her ball-striking prowess. At the 430-yard 18th hole, her drive went so far it finished on a spectator walkway, just 70 yards from the green. All right, it was downwind but still – what she’d give for that one come Sunday.

Hull says she hasn’t been able to get to the gym in weeks owing to the bubble system operating at tournaments in Europe, but owns up to the fact that her drinking days now lie in the past. 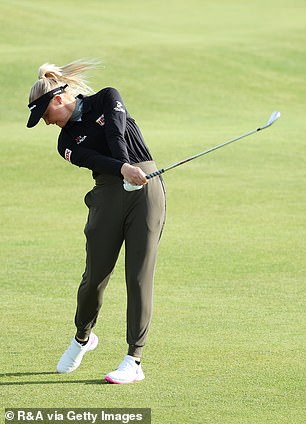 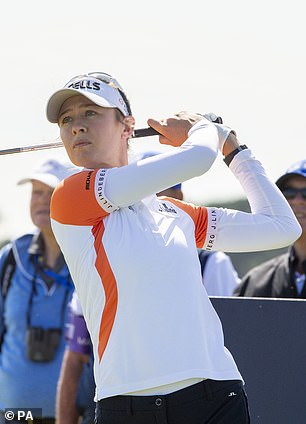 Hull will tee off in the first round alongside the girl of the moment, Nelly Korda (right)

‘I used to drink on Wednesday, Thursday, Friday, Saturday and Sunday if it was a week off,’ she cheerfully confessed. ‘Now I might have a couple of cocktails once a month.’

I could probably count on the fingers of two hands the number of pros who’ve asked me questions when I’ve interviewed them over the years but Hull is a bundle of curious energy. ‘Were you good at English at school to do your job?’ she wants to know. Allegedly, Charley.

There are no regrets at skipping the Olympics. ‘I’m just not very good at having to live in bubble hotels and I certainly wouldn’t have coped with the restrictions in place in Tokyo,’ she admitted.

The four hours flew by. What a day to play the hardest course in Britain from the championship tees. A little wind, lots of sunshine and the magnificent links in the sort of condition you’d hope for an event of this magnitude. 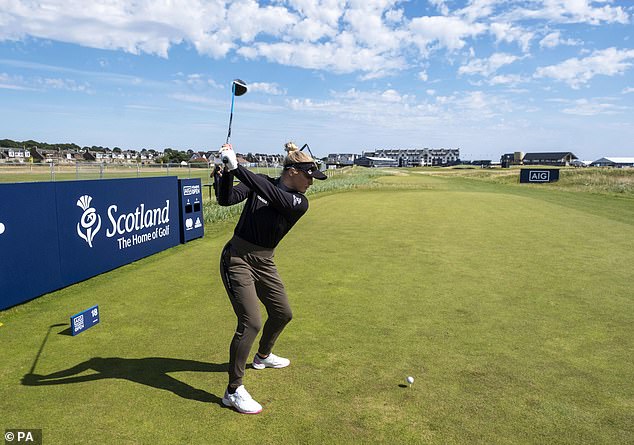 An absolute delight, Hull is the epitome of the modern golfing athlete and is as good as any

There was plenty of laughter, a couple of indiscreet stories and lots of admiration for the woman who’s as good as any but refuses to take herself too seriously.

When this week is over, she’s off to London with her good mate Georgia Hall for a girlie shopping and spa weekend. You suspect it won’t make a blind bit of difference to her whether she has the Women’s Open trophy in tow or not.

There again, given the huge hike in prize money announced by the R&A on Wednesday, it might make a difference to her spending power. 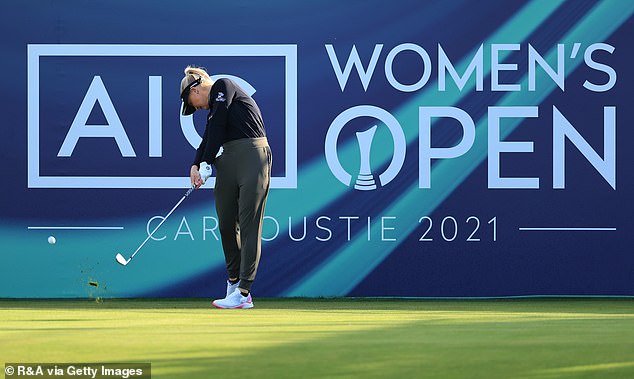 Next year, there will be another £727,000 rise, meaning the prize fund will have doubled in the space of just four years.

‘We are absolutely committed to elevating the AIG Women’s Open and enhancing its status as one of golf’s premier championships,’ said Martin Slumbers, CEO of the R&A. Good for them.

Thankfully, the Americans have disregarded the advice of their Centre for Disease Control not to visit the UK and are here in numbers. The Asian contingent is as formidable as ever and there’s always hope on the home front when there’s Hall, Hull and Mel Reid.

As for the star group, Hull will tee off in almost exactly the same early slot as in Wednesday’s pro-am. In the effortless motion of her playing partner, she will surely find plenty of evidence to reflect on what an enormous difference a day can make. 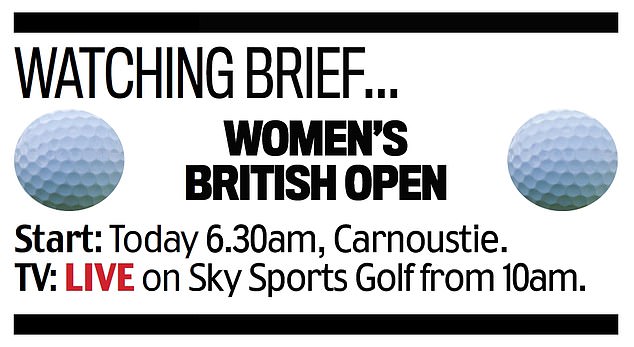