The Paris prosecutor’s office said Peter Cherif, of France, was expelled to France after his recent arrest in Djibouti

A Charlie Hebdo suspect has been hit with terrorism charges as he arrived in France over claims he helped organise the deadly 2015 attack on satirical weekly Charlie Hebdo.

The Paris prosecutor’s office said Peter Cherif, of France, was expelled to France after his recent arrest in Djibouti.

He was immediately taken into custody and charged upon his arrival on Sunday at Paris’ Charles de Gaulle Airport, accused of criminal association with a terrorist enterprise.

Cherif, also known as Abu Hamza, was a close friend of the two brothers who killed 11 people at Charlie Hebdo’s offices and a policeman nearby in Paris.

He had travelled to Iraq and Syria in the early 2000s, and had been on the run from French authorities since 2011.

Some 100,000 people gathered across France in the days after the attack to back the publication, Charlie Hebdo, as a huge manhunt was launched to find the attackers. 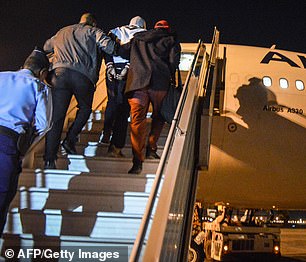 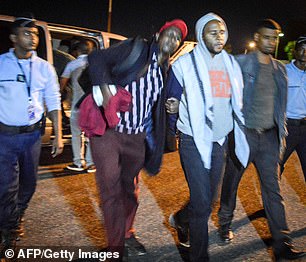 Cherif, also known as Abu Hamza, boards a plane as he is extradited to France at Djibouti International Airport

The suspected Al Qaeda militants massacred 12 people in Paris, and among those slaughtered was a police officer as he begged for mercy.

Thousands of people went to Republique Square near the scene to honour the victims, holding signs reading ‘Je suis Charlie’ – ‘I am Charlie’.

Clad all in black with hoods and speaking French, the militants forced one of the cartoonists – at the office with her young daughter – to open the door.

Witnesses said the gunmen shouted ‘we are from the Al Qaeda in Yemen’, and ‘Allahu akbar!’ – Arabic for ‘God is great’ – as they stalked the building. 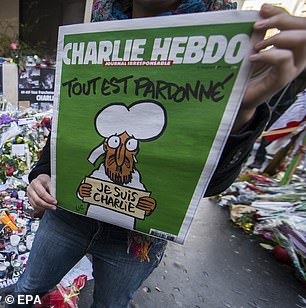 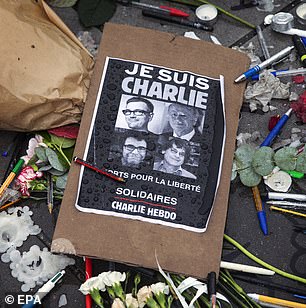 Thousands of people went to Republique Square near the scene to honour the victims, holding signs reading ‘Je suis Charlie’ – ‘I am Charlie’

They were also said to have yelled ‘the Prophet has been avenged’, during what was France’s deadliest post-war terrorist attack.

The attackers headed straight for the paper’s editor and cartoonist, Stephane Charbonnier, killing him and his police bodyguard.

The security had been recruited to protect him after extremists firebombed the offices in 2011 over a satirical cartoon about the Prophet Mohammed.

A year later, Mr Charbonnier famously dismissed threats against his life, declaring: ‘I would rather die standing than live kneeling.’