Former broadcaster Charlie Rose – who disappeared from television after 17 women claimed he sexually harassed them – made a bizarre return to Twitter on Sunday.

He posted the letter ‘H’ with no explanation, which fueled fans to express how much they missed the fallen broadcaster who used to work for CBS News.

But others were quick to remind people that Rose has been off air since November 2017 for a reason.

One person replied to Rose’s tweet with ‘(H) is for harassment’, which is a riff on PBS’ Sesame Street, one of broadcast network he used to work on before the allegations.

Rose ‘deeply apologized’ in a statement once the sexual harassment allegations were revealed in November, and he hasn’t attempted to return to his role as a broadcaster since after his decades-long career.

It is unclear what the 76-year-old meant when he tweeted out the letter ‘H’.

This was technically his first public comment on Twitter since he released his statement in November in regards to the sexual harassment accusations.

There was an influx of fans who responded to his tweet to express how much they miss him on the air.

One person said: ‘At this time of turmoil we need your journalism and professionalism. Hope to see you back on the air soon.’

Another said: ‘Charlie, welcome back. Your absence has left an intellectual void not only in my life, but that of many of your viewers.’

But not all the responses on Twitter were positive considering why Rose had to step down from his show.

Another user quickly reminded people while Rose has been out of the spotlight. Rose has been accused of sexual harassment by 17 women. He was then fired from ‘CBS This Morning’. The ‘H is for harassment’ is also a riff on PBS’ Sesame Street, a network Rose used to work on

Despite the allegations, people were still quick to beg Rose to come back on the air

Another user said Rose’s absence has left an ‘intellectual void’. Rose has not stated if he intends to come back on the air 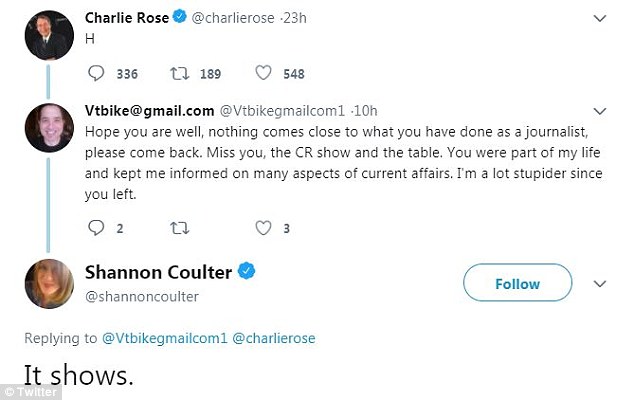 Another user, Shannon Coulter, was quick to respond to people who were begging for the fallen broadcaster to come back

One user, named Shannon Coulter, responded to multiple people on Twitter who said they missed the broadcaster and reminded hem of why Rose was off the air.

A user said she felt ‘stupider’ since Rose left the air, to which Coulter responded ‘it shows.’

She also shared articles with some users that reported on his sexual harassment allegations.

Rose was one of many prominent figures who received backlash during the #MeToo movement.

His exploits were first published by the Washington Post where they reported he engaged in sexual misconduct with at least eight women.

More women came forward after the article to bring it to a total of 17 woman with allegations against the long-time broadcaster. 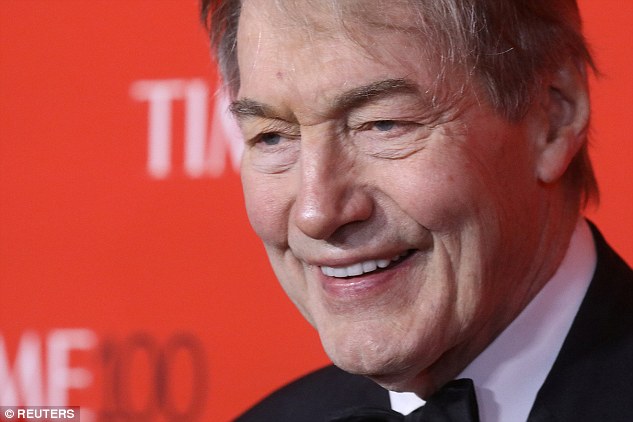 Rose was fired from ‘CBS This Morning’, PBS and Bloomberg after 17 women claimed the broadcaster sexually abused them 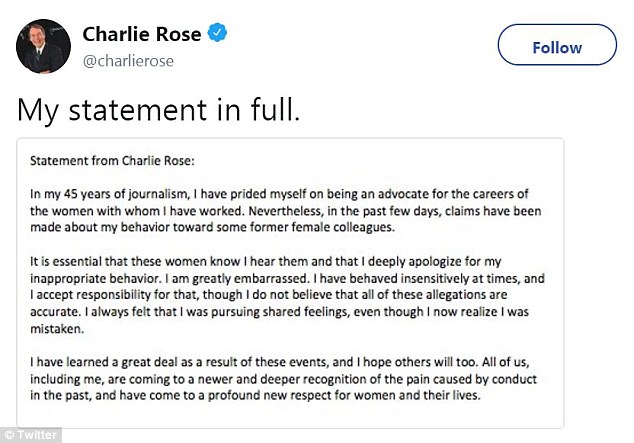 Before Sunday, the last time Rose posted was his lengthy statement where he apologized for the allegations that were made against him

After the report came out, Rose was fired from hosting ‘CBS This Morning’ and was also dropped by PBS and Bloomberg for his interview show, ‘Charlie Rose’.

This decision was monumental by PBS, who had aired his show since 1991.

In a lengthy statement in response to the expose, Rose did not deny all of the allegations being made by the women but said that he did not believe all of his accusers were ‘accurate’ in their description of his offenses.

‘It is essential that these women know I hear them and that I deeply apologize for my inappropriate behavior. I am greatly embarrassed,’ stated Rose.

‘I have behaved insensitively at times, and I accept responsibility for that, though I do not believe that all of these allegations are accurate. I always felt that I was pursuing shared feelings, even though I now realize I was mistaken.’

Rose has not stated if he intends to return to broadcasting eventually or if he is content with retirement.