By Tyrell Feaster For Dailymail.Com and Reuters

Andre Shinyashiki scored in the fourth minute of stoppage time for a 2-2 tie against visiting Columbus on Wednesday, but Charlotte FC were still eliminated from playoff contention in the Eastern Conference.

Charlotte trailed 2-0 in the second half.

The tie for the Crew (10-7-16, 46 points) temporarily moved them into a fifth-place tie with Cincinnati but after Inter Miami beat Orlando City later Wednesday, it dropped down the seventh. The top seven teams qualify.

The regular season ends Sunday with the Crew at Orlando.

Lucas Zelarayan scored his 10th and most spectacular goal of the season in the 36th minute to give the Crew a 1-0 lead, a free kick from 56.1 yards. Luis Diaz made it 2-0 in the 54th minute before Daniel Rios scored his fifth goal in the past two matches for Charlotte to cut the deficit to 2-1 in the 58th minute.

The match was the completion of the July 30 match that was suspended in the 16th minute because of inclement weather.

Charlotte goalkeeper Kristijan Kahlina was the victim of Zelarayan’s masterpiece.

Zelarayan surveyed the situation before his restart and spotted Kahlina wandering 15 yards from the net and he drilled a shot to the far netting. 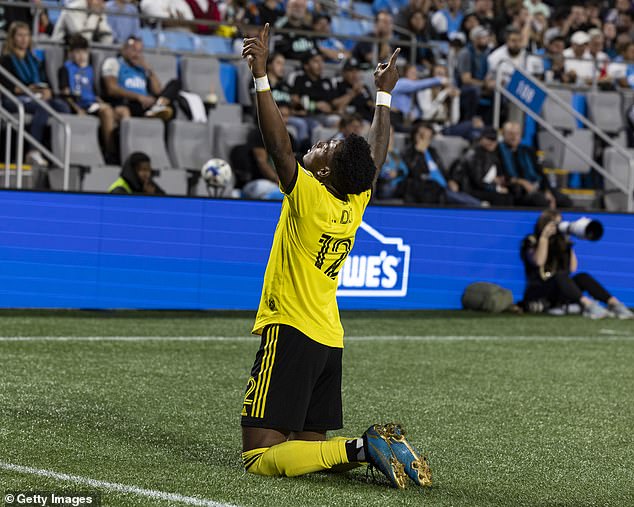 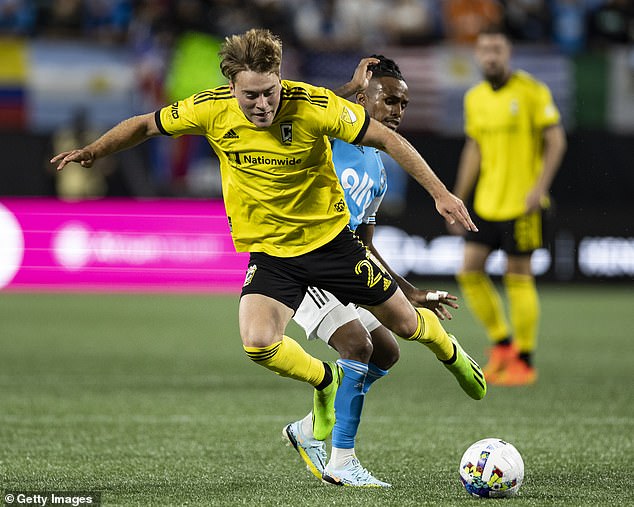 Since joining MLS in March 2020, Zelarayan has scored 17 goals from outside the box in regular season play, more than double of any other player in the league during that span. Randall Leal of Nashville SC is second with eight.

According to MLS Communications, Zelarayan scored the longest free kick goal in the league since the stat began being kept in 2010.

On the Diaz goal, Cucho Hernandez, returning from a one-game suspension for abusive language, back-heeled a pass to Derrick Etienne Jr., who sent the ball through the box to Diaz on a late run for his third goal.

Rios, who scored four goals vs. Philadelphia on Saturday, put Charlotte on the board with a header off a Yordy Reyna cross. Kahlina then kept it a one-goal game with saves on Hernandez and Zelarayan with 15 minutes left