A mother who died in a horrific head-on highway crash along with her four children has been remembered as an ‘amazing’ woman whose ‘kids were her world’.

Charmaine Harris McLeod, 35, died instantly on Monday night when she was overtaking a truck on the Bunya Highway near Kumbia, Queensland.

Emergency workers described the crash as ‘catastrophic’ and one of the worst scenes they had ever been to.

Three of Ms McLeod’s children were unable to be rescued and died in the back seat of the family’s station wagon, while a fourth child was rushed to hospital but died on the way there.

Devastated friends flooded social media with tributes to Ms McLeod and her children Ally, 6, Matilda, 5, Wyatt, 4 and Zaidok, 2 – who all lived at Eli Water, near Hervey Bay.

Charmaine Harris McLeod, 35, died in a horrific head-on highway crash along with her four children

‘I’ve never seen a single mum let alone of four give up so much for their kids,’ a friend wrote.

‘I can’t believe what I’ve woken up to this never should’ve f**king happened I’m in so much shock and pain, this is so f**ked life is so unfair’.

‘Those kids were something else I tell you and lived like princes and princesses for their short life they had but there was nothing materialistic to it they were just so happy and loved and their happiness came before anything.’

Another friend wrote: ‘You were always there for me when i need a friend and you always gave me the kick up the butt I needed. I Miss you.’

‘You will always be in my heart’.

It is understood Ms McLeod had recently separated from the children’s father James McLeod, who was still in regular contact with the kids.

Friends paid tribute to Mr McLeod on social media in the aftermath of the tragedy.

‘James McLeod I am here for you…sorry about your four angels’ a friend wrote.

A neighbour, Gary Loweke, who used to mow the lawn for Ms McLeod said they were a friendly family and the kids were often on the street playing hopscotch or riding their bikes.

‘It’s a bloody disaster…those four kids waved at us every day as we went past,’ Mr Loweke said.

‘Charmaine was friendly, she was really nice… she was very good with the kids. If she wasn’t there, here sister would be there, but she was never far away from her family for long,’ he said. 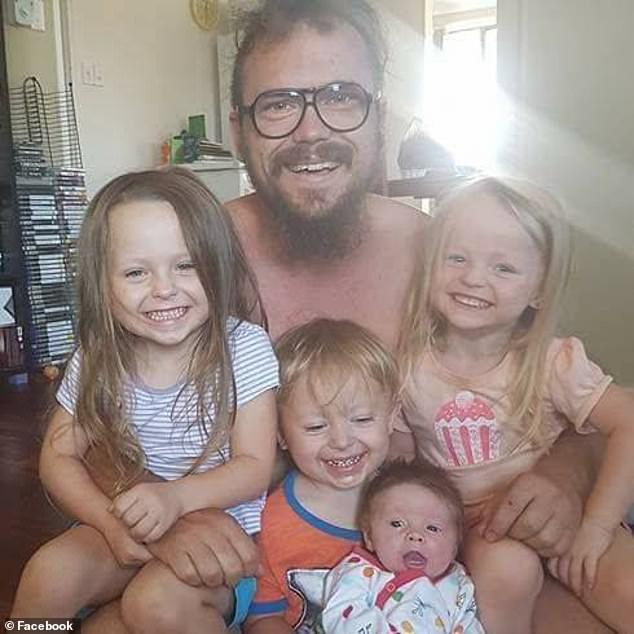 Ally, 6, Matilda, 5, Wyatt, 4, and Zaidok, 2, (pictured with their father James McLeod) were in the car with their mother Charmaine when they were killed 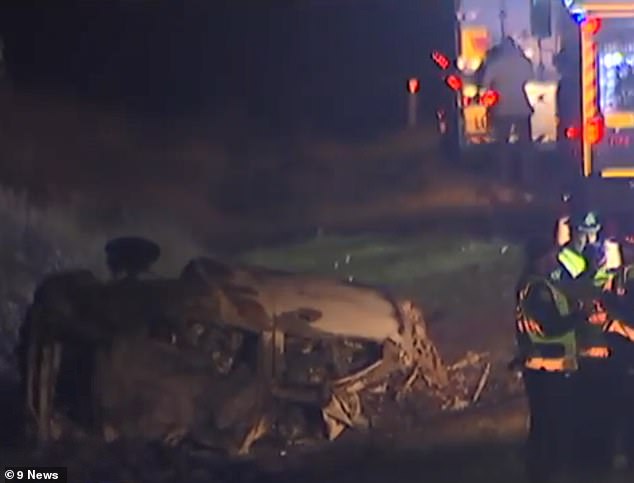 The driver of the car and her three children, all aged under 10, were pronounced dead at the scene. A fourth child died a short time later on the way to hospital. Pictured: The wreckage of the car

Police said initial investigations showed Ms McLeod was overtaking a truck when she slammed head-on into an oncoming vehicle.

Emergency workers at the crash scene described what they were confronted with as ‘catastrophic’.

The truck Ms McLeod slammed into also caught fire but the driver, a 47-year-old man, escaped and was taken to hospital for his injuries.

Kawungan State School, in Hervey Bay, said its community was ‘deeply shocked and saddened’ by the death of the two eldest children.

‘They were both joyful and friendly children who will be greatly missed by all their friends and teachers,’ Principal Mark Jones said

‘Our thoughts and sincere sympathies go out to the family, caregivers, friends and loved ones during this difficult time.

‘Support is being provided to students and staff, and guidance counsellors will remain at the school to provide support in any way they can and for as long as it is needed.’

A policeman at the scene told Channel 9: ‘It’s certainly one of the worst accidents I’ve ever seen. It’s just a tragedy for everyone involved.’ 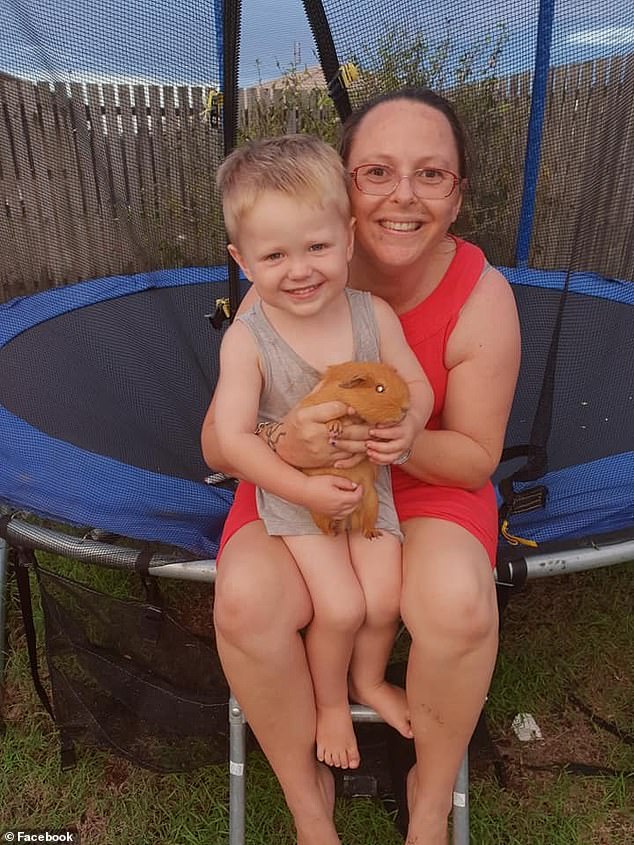 Shocked and heartbroken friends in her hometown of Hervey Bay, Queensland, sent tributes in the hours after the catastrophic accident 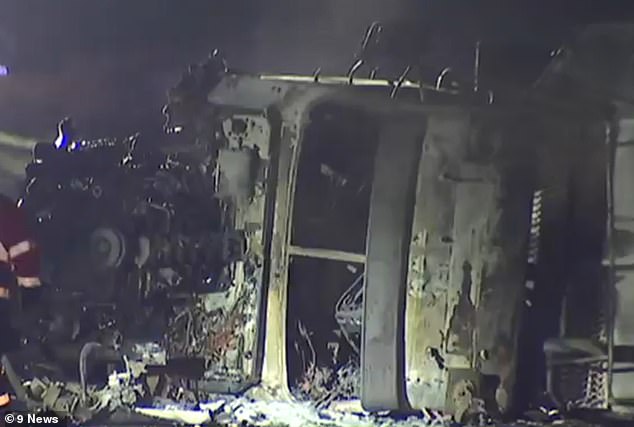 The woman, 35, was driving in South Burnett, Queensland at 7.20pm when she pulled out to overtake a truck. Pictured: The wreckage of the truck 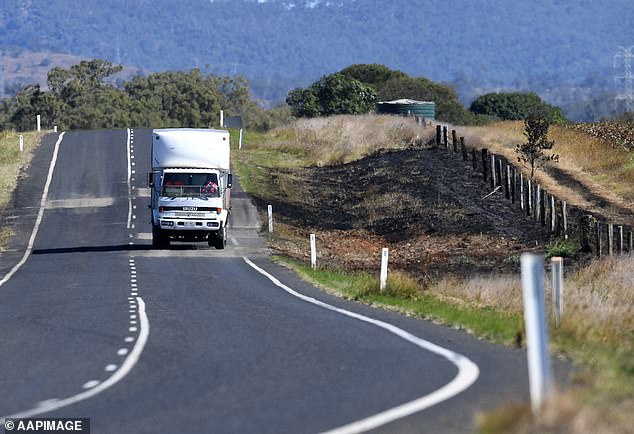 The mother and three of her children, all aged under 10, were pronounced dead at the scene (pictured)

‘These are very seasoned officers and they’ve explained this as tragic, extremely traumatic with people obviously involved in the car that’s caught fire,’ he said.

‘Smoke, fire, our officers have gone though that dangerous scene to get to the child they were able to work on… Unfortunately that child died.

‘Our hearts go out to the family and friends of those people.’

Investigations are continuing and police are expected to remain on the scene for hours.

The crash happened 7km outside Kumbia on Bunya Highway, south of the turn off to the Bunya mountains, toward Dalby. 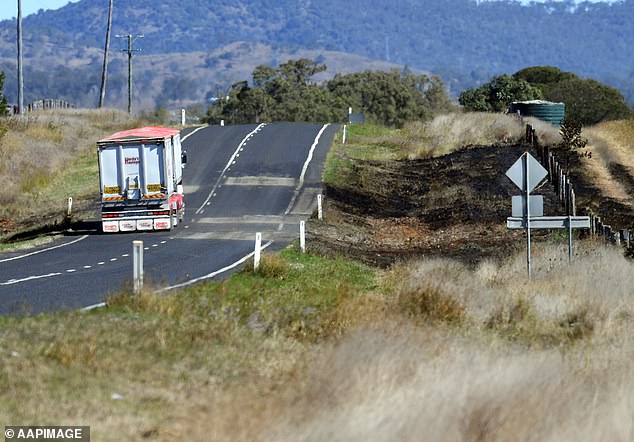 The crash happened 7km outside Kumbia on Bunya Highway, south of the turn off to the Bunya mountains, toward Dalby. Pictured: The scene