The Commission on College Basketball did not recommend any rule changes aimed at allowing players to receive financial compensation, but the independent panel, led by former Secretary of State Condoleezza Rice, did strongly suggest a number of other options in the NCAA’s mission to clean up the sport.

‘The college degree is the real ticket to financial security for most student athletes,’ Rice said at Thursday’s press conference.

Among the potential policy changes endorsed at Thursday morning’s press conference, the commission implored the NCAA to take control of the sport, calling for sweeping reforms to minimize effects of the NBA’s controversial ‘one-and-done’ rule, permit players to return to school after going undrafted by the NBA and ban cheating coaches for life.

The independent commission released a detailed 60-page report Wednesday, seven months after the group was formed by the NCAA in response to a federal corruption investigation that rocked college basketball. Ten people, including some assistant coaches, have been charged in a bribery and kickback scheme, and high-profile programs such as Arizona, Louisville and Kansas have been tied to possible NCAA violations.

The Commission on College Basketball did not recommend any rule changes aimed at allowing players to receive financial compensation, but the independent panel, led by former Secretary of State Condoleezza Rice, did strongly suggest a number of other options in the NCAA’s mission to clean up the sport, such as banning coaches for life if they’re caught cheating

Most notably, one filing contained allegations that a recruit’s family accepted a $100,000 payment to secure his commitment to Louisville. That payment was allegedly handled by then-Adidas director of global sports marketing James Gatto and approved by Hall of Fame coach Rick Pitino, who was fired by the school in the wake of the scandal.

‘The members of this commission come from a wide variety of backgrounds but the one thing that they share in common is that they believe the college basketball enterprise is worth saving,’ Rice told the AP. ‘We believe there’s a lot of work to do in that regard. That the state of the game is not very strong.

‘We had to be bold in our recommendations.’

The Associated Press obtained a copy of the report ahead of Rice presenting its findings to top NCAA officials. It’s not yet clear how the governing body would pay for some of the proposals, and some of the panel’s key recommendations would require cooperation from the NBA, its players union and USA Basketball.

The commission offered harsh assessments of toothless NCAA enforcement, as well as the shady summer basketball circuit that includes AAU leagues and brings together agents, apparel companies and coaches looking to profit on teenage prodigies. It called the environment surrounding college basketball ‘a toxic mix of perverse incentives to cheat,’ and said responsibility for the current mess goes all the way up to university presidents. Hall of Fame coach Rick Pitino has not been charged in the probe, but was fired by Louisville after he was accused in one filing of approving a bribe for a recruit 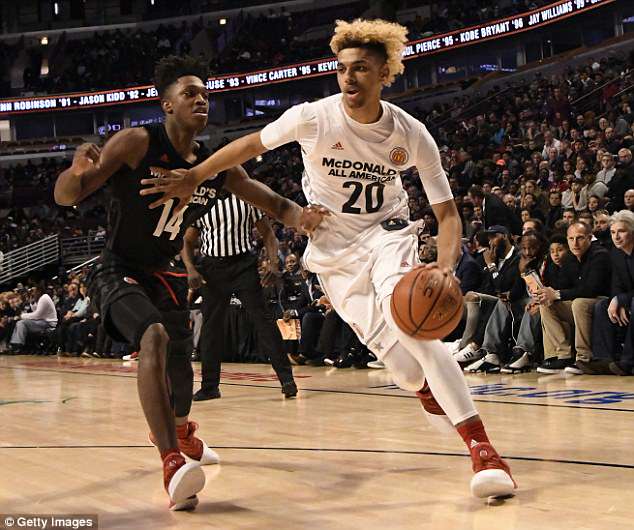 Brian Bowen was a blue-chip recruit as a senior in high school before surprisingly signing with Louisville, which suspended him after the FBI probe was revealed. Louisville did not seek reinstatement for Bowen, who then transferred to South Carolina

The group recommended the NCAA have more involvement with players before they get to college and less involvement with enforcement. It also acknowledged the NCAA will need help to make some changes and defended its amateurism model, saying paying players a salary isn’t the answer.

‘The goal should not be to turn college basketball into another professional league,’ the commission wrote in its report.

NCAA President Mark Emmert has said he wants reforms in place by August. The commission does, too. And it wants to review the NCAA’s plans for implementation before it goes before the boards for approval.

The 12-member commission made up of college administrators and former coaches and players was tasked with finding ways to reform five areas: NBA draft rules, including the league’s age limit that has led to so-called one-and-done players; the relationship between players and agents; non-scholastic basketball, such as AAU, meant to raise the profile of recruits; involvement of apparel companies with players, coaches and schools; and NCAA enforcement.

The overarching message to those in college athletics: Take responsibility for problems you have created. 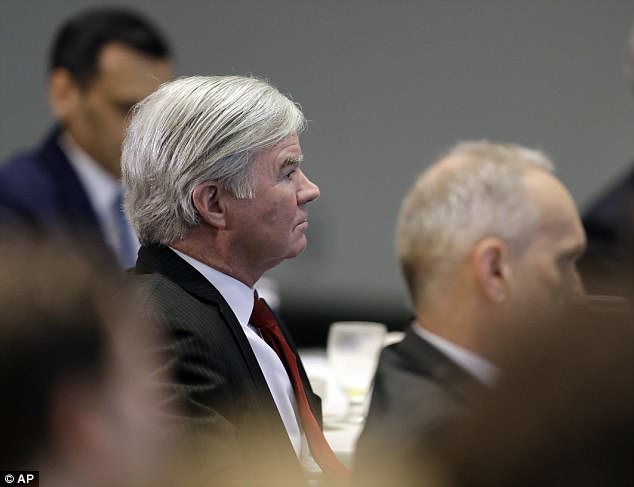 The commission emphasized the need for elite players to have more options when choosing between college and professional basketball, and to separate the two tracks.

The commission called for the NBA and its players association to change rules requiring players to be at least 19 years old and a year removed from graduating high school to be draft eligible. The rule was implemented in 2006, despite the success of straight-from-high-school stars such as LeBron James, Kobe Bryant and Kevin Garnett. The commission did, however, say if the NBA and NBPA refuse to change their rules in time for the next basketball season, it would reconvene and consider other options for the NCAA, such as making freshmen ineligible or locking a scholarship for three or four years if the recipient leaves a program after a single year.

‘One-and-done has to go one way or another,’ Rice told the AP, expressing hope the NBA would act.

The commission decided against attempting to mirror rules for baseball but said it could reconsider. Major League Baseball drafts players out of high school, but once an athlete goes to college he is not eligible to be drafted until after his third year. Baseball players can also return for their senior seasons after being drafted as long as they do not sign professional contracts.

The commission did take a piece of the baseball model and recommended basketball players be allowed to test the professional market in high school or after any college season, while still maintaining college eligibility. If undrafted, a college player would remain eligible as long as he requests an evaluation from the NBA and returns to the same school. Players could still leave college for professional careers after one year, but the rules would not compel them to do so.

The commission recommended harsher penalties for rule-breakers and that the NCAA outsource the investigation and adjudication of the most serious infractions cases. Level I violations would be punishable with up to a five-year postseason ban and the forfeiture of all postseason revenue for the time of the ban. That could be worth tens of millions to major conference schools. By comparison, recent Level I infractions cases involving Louisville and Syracuse basketball resulted in postseason bans of one year.

In those cases, then-Louisville coach Rick Pitino, who was later fired after being tied to the FBI investigation, received a five-game NCAA suspension for violations related to an assistant coach hiring strippers for recruits, and Syracuse coach Jim Boeheim was suspended for nine games for academic misconduct and extra benefits violations. The commission said suspensions should be longer, up to one full season.

Instead of show cause orders, which are meant to limit a coach’s ability to work in college sports after breaking NCAA rules, the report called for lifetime bans. The commission also said coaches and administrators should be contractually obligated comply with NCAA investigations.

The commission proposed the NCAA create a program for certifying agents, and make them accessible to players from high school through their college careers.

The NCAA, with support from the NBA and USA Basketball, should run its own recruiting events for prospects during the summer, the commission said, and take a more serious approach to certifying events it does not control.

The NCAA should require greater transparency of the finances of what it called non-scholastic basketball events and ban its coaches from attending those that do not comply with more stringent vetting, the report said. Such a ban could wipe out AAU events that have flourished in showcasing future talent.

The commission also called for greater financial transparency from shoe and apparel companies such as Nike, Under Armour and Adidas. These companies have extensive financial relationships with colleges and coaches worth hundreds of millions of dollars, and Adidas had two former executives charged by federal prosecutors in New York in the corruption case.

The commission also called out university presidents, saying administrators can’t be allowed to turn a blind eye to infractions.

To that end, the commission said university presidents should be required to ‘certify annually that they have conducted due diligence and that their athletic programs comply with NCAA rules.’

The commission recommended the NCAA Board of Governors, currently comprised of 16 university presidents and chancellors, include five public members with full voting privileges who are not currently employed as university leaders.

Finally, the commission admonished those within college sports who use the NCAA as a scapegoat for the problems in basketball, saying universities and individuals are accountable for keeping the game clean.

‘When those institutions and those responsible for leading them short-circuit rules, ethics and norms in order to achieve on-court success, they alone are responsible,’ the commission wrote. ‘Too often, these individuals hide behind the NCAA when they are the ones most responsible for the degraded state of intercollegiate athletics, in general, and college basketball in particular.’ 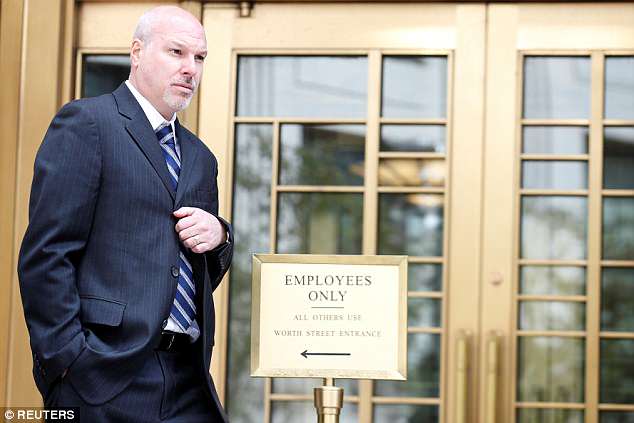 James Gatto, Adidas’s former director of global sports marketing, exits the Manhattan Federal Courthouse after being charged with bribery and fraud in connection to basketball recruiting