Cheating husband, 41, who beat wife, 39, in front of their children spared jail

A cheating husband who beat his wife in front of their children has been spared jail after a judge ruled a ‘focus on his feelings’ would help better protect her from further attack.

Anthony Robson, 41, headbutted Kathryn, 39, in their 11-year-old daughter’s bedroom, leaving his wife with a swollen, cut nose and bruises all over her body after she caught him texting another woman.

The father-of-three grabbed his wife by the throat, forcing his teenage son to intervene.

Robson broke down their front door, smashed a fan against the wall and punched the door of the marital bedroom.

Mrs Robson threw a Pot Noodle over her husband of 14 years when she caught him sending messages to another woman from a camper van parked outside their home in the run-up to his attack.

He had started a new relationship while he and his wife were estranged, but had since returned to the family home in Glossop, Derbyshire.

In a victim personal statement Mrs Robson said: ‘Since the attack I have felt a lot different to my usual self which is usually confident and fun. I don’t go out alone.

‘I am not eating as I’m too upset and hurt. I’m having panic attacks and not sleeping. I am very nervous and jumpy and if I see an argument this makes me feel uncomfortable.

‘I cannot concentrate on any of the hobbies I used to do, I don’t want to go out because I’m nervous about what might happen. I have nightmares because all I can hear is my daughter screaming.’ 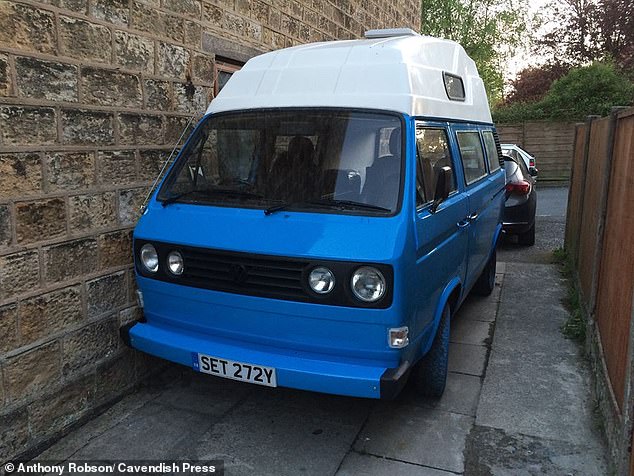 She also branded her husband a ‘home-wrecker and a wife-beater’ and in Facebook posts ahead of his husband’s court hearing added: ‘I’m alive and traumatised – need prayers to survive the day.’

At Minshull Street Crown Court, Manchester plasterer Robson, of now of Hollingworth, Hyde, admitted assault by beating and occasioning actual bodily harm but was given a six-month jail term suspended for two years after he agreed to attend a counselling programme which is designed to help offenders ‘build better relationships’.

He was banned from contacting his wife under the terms of an indefinite restraining order. The so-called Building Better Relationships course is designed to ‘promote changes in behaviours and attitudes of males convicted of intimate partner violence.’ 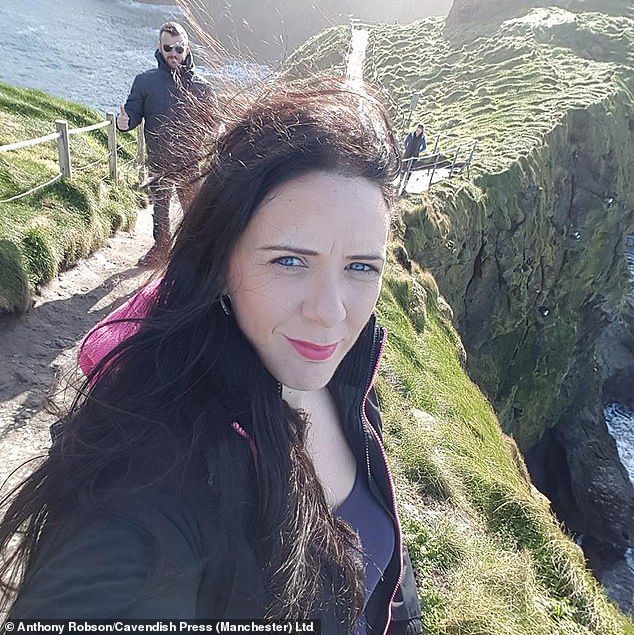 Sentencing Judge Bernard Lever told Robson: ‘It is a very important feature of this case that you, until recently, were a person of completely good character – but in your early 40s, you have taken a nose dive in your behaviour.

‘I don’t know how long relations have been deteriorating between you and your wife, what I do know is that you’re a big man and she is a petite lady, in any event you had absolutely no business using excessive force on her. Your wife is not a female wrestler.

‘I have heard that you have never maintained that is was reasonably necessary to defend yourself. You know perfectly well that you should not have been texting the other woman in the van, shouldn’t have had alcohol that evening or broken the door down.

‘It was bound to end in violence which it did. But because there have been no other domestic call-outs, I am willing to suspend the sentence. But I want to make serious it is not acceptable for your 11-year-child to have to watch her father beat her mother in her own bedroom, she will have this tape playing over in her head.

‘I want you to focus on your feelings because that’s the best way to protect your wife and children.’

The court heard how on 6 October this year the defendant had been out drinking with friends when he met up with his estranged wife. 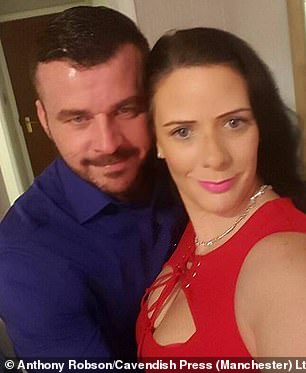 They both returned to the family home but an argument broke out in the early hours of the next morning as she caught him texting another woman.

Prosecutor Juliet Berry said: ‘In May this year the parties separated because the defendant had been having a relationship with another woman, there had been a period of animosity but he returned to the home.

‘On the evening, the complainant went out to Liverpool for the evening with a friend and the defendant went for a drink in Glossop. They met at the end of the night. When they returned home, she noticed he was texting another woman while they were sat outside in a camper van. He was eating a pot noodle which she threw over him.

‘She went into the house and locked the door which he broke open by kicking it, the parties argued in the kitchen. She left the kitchen area to try and diffuse the situation and went up the bedroom.

‘He grabbed her by the throat on a couple of occasions, at this point their 17-year-old son intervened and he pushed him out of the way. He threw a fan at the wall and damaged the door by punching it.

‘Their 11-year-old daughter could be heard crying so Mrs Robson went into the bedroom to try and comfort her, the defendant followed her and headbutted her so that she fell to the floor.

‘The issue of the headbutt is something where there is some dispute, he said he was reckless but did not deliberately do this. She suffered a cut to the nose, swollen nose, bruises to the side of the head and bruises on the body.

‘After she fell to the floor, she hit her head, the defendant tries to assist her. The 11-year-old child witnesses the assault.

‘The police arrived to find both the defendant and Mrs Robson in a state of distress, he admitted straight away that he had hurt his wife. He accepted that he assaulted her and expressed remorse for behaving in the manner he did that night.’

Offering a basis of plea with his own version of events, Robson said: ‘Kathryn and I had been arguing over me texting another woman, she tipped a pot noodle over me, we continued to argue in the house.

‘I went upstairs to get my belongings but she kept coming at me and clawed at my eyes. I grabbed her throat a couple a times and accept this was not in self-defence.

‘Kathryn pulled me down the stairs, as I came up the stairs I banged heads with her and came into contact with her nose. I did not pull my head back and headbutt her but I accept that what happened acted as a headbutt.’

In mitigation defence lawyer Thomas McKail said: ‘Prior to 2018, the defendant has never been before the criminal courts but he accepts full culpability. The married clearly is now over and has reached an end point. The defendant wholly recognises his attempt to reconcile through alcohol was inappropriate.’