A woman who was unhappy that her ‘well-off’ fiancé bought a ‘cheap,’ poorly-made engagement ring soon found out that their troubles ran much deeper — and that he purchased the lackluster jewelry on purpose because he was having an affair and wanted an easy way out.

The anonymous woman shared her rollercoaster of a story on Reddit this week, at first just seeking advice for dealing with her disappointment over the ring — which she suspected didn’t even have a real diamond.

Though she was wary to voice her feelings to her fiancé at first, she eventually sat him down to talk — which is when he blew up, revealing that he was waiting for her to take issue with the intentionally-cheap ring so that he could accuse her of being a gold digger and break up.

Uh-oh: A woman who was unhappy that her ‘well-off’ fiancé bought a ‘cheap,’ poorly-made engagement ring soon found out that their troubles ran much deeper (stock image)

The woman, who posted under the username Bowdownpls, seemed hesitant to complain about her ring when she initially posted.

She noted that while she is doing fine financially, her now former-fiancé is ‘quite well off’ and owns several expensive watches.

Aware of his financial situation, she was surprised to get such an ‘understated’ engagement ring, which she described as ‘more of a nice stacker than an engagement ring to show off’.

What’s more, she admitted she was ‘doubtful’ that the small stone was even a real diamond, and she noted that friends and family ‘got awkward’ and ‘feigned excitement just long enough until it was okay to change the topic’ when she showed them the rock.

‘I would like to make clear that I am not expecting a “3 months salary” ring or an over-the-top wedding,’ she wrote. ‘However, this is a piece I will be wearing daily for decades, and is largely considered a “symbol of his love.”

‘But I really don’t think I’m out of line for thinking of it as a long term investment piece given the amount of wear it will see and the sentimentality behind it. Surely it is worth more than a gaming console?! 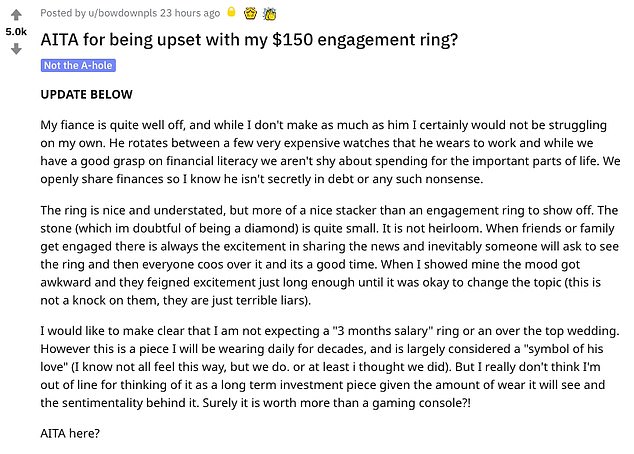 Yikes: She found out that he purchased the lackluster jewelry on purpose because he was having an affair and wanted an easy way out

‘We had briefly talked about overall style, and he has access to my jewelry box to know the stuff I typically wear. As the price of the ring wasn’t very important to me the budget for it was never really discussed, which I see as a mistake now but I didn’t realize that this could be a problem,’ she went on.

Bowdownpls was also hurt that she had a wealthy fiancé ‘that invests more into the latest gaming console than he does a life long symbol of our love.’

‘Given that he has bought me more expensive jewelry in the past and sees what I wear on a regular basis, for him to lo- ball an important item this much seems pretty far out of left field and not something I would thought I would have needed to clarify with him even if we had a longer conversation about it,’ she went on.

‘I think I am more hurt with what it says to give your fiancé such a low-priced ring when money clearly isn’t the issue than the fact that the ring itself was low budget.

‘To be blunt, its a cheap ring,’ she went on. ‘In look and cost. Yes, he could have spent hours picking out the indie jeweler to get the ring that is nothing like what I have or have ever mentioned liking in a much lower price bracket than we would ordinarily spend on just regular accessories.

‘However, I don’t feel like I’m making a large leap in assuming he didn’t. To me, this is about more than just the fact that he didn’t get the exact style I had in mind.’

Though she was clearly unhappy with the ring — and what she saw as the greater message behind it from her fiancé — she wasn’t sure whether she would be out of line to express her feelings.

Ultimately, though, with the support of other Redditors, she decided to sit him down for a talk.

Shockingly, she learned that their relationship was in much worse shape than she even realized.

‘He came home and we were settling down and around dinner I started the conversation with “Honey, I’d like to talk about the ring” and before I could finish he just blew up,’ she wrote in an update.

‘Started yelling “f***ing finally” and how I’d ruined everything by waiting so long.

‘He bought a s***ty ring from a jeweler who got bad reviews so that when I got upset over it he could dump me under the guise that I was a gold digger.’

Bowdownpls learned that he was having an affair with a ‘younger model’ that he ‘earned’ but ‘knew that breaking things off when everyone loved me so much would “hurt his optics,” so he had to make it my fault.’

Her former fiancé told her that he figured he’d gain sympathy from friends and family if they thought she complained about the quality of the ring.

Looking back, Bowdownpls said that she now sees some ‘glaringly obvious … symptoms of something more malicious under the surface.’

Unsurprisingly, she has now left her former fiancé and is staying with her mom.

‘On the plus side, if there is one, is that I don’t have to wear the f***ing hideous ring anymore,’ she concluded.