Checking into East, the hippest new hotel in sunny Florida

A spoonful of Sugar to help your stay in Miami go down: Checking in at East, the hippest new hotel in sunny Florida

By Mark Palmer for the Daily Mail

The first thing Sugar’s ‘Assistant Director of Guest Experience’ does on waking up each morning (apart, presumably, from lamenting his ghastly title) is look at the weather.

You’d think that here in Miami, in ‘the sunshine state’ of Florida, it can’t cause him many worries, but when you’re in charge of the hottest ticket in town, you don’t want rain to stop play.

Certain to appeal to your sweet tooth: Sugar sits on the 40th floor of the East hotel

Sugar is a rooftop bar in downtown Miami. It opened last year and is part of East, the first Swire hotel outside Asia – and it’s the place to be.

First up, the lobby and check-in desk, where we marvel at the modern cathedral design, with a floor-to-ceiling trellis behind a long, white marble reception desk that could easily be a bar. And there are palm trees behind the trellis.

Sugar is on the 40th floor. Even the lift is a thrill, with special effects to make you feel you’re floating in space. Then, suddenly, you’re on top of the world in a tropical jungle that just happens to have a wood-shack bar at the centre of it.

Our table looks back to Miami Beach, and is one of the most exciting skylines I have ever seen. We order a selection of oriental tapas and a couple of lethal mojitos. 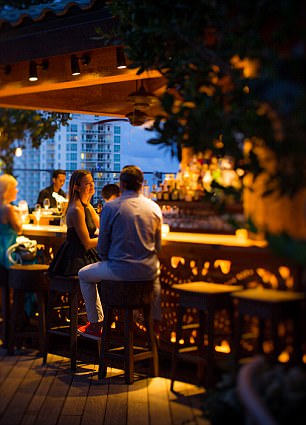 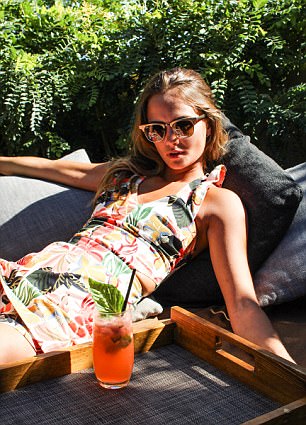 Keeping it cool: The bar has a chic ambience in the evening, and in the daytime

The hotel has 352 rooms and 89 serviced apartments — and I bet most of them are on expense accounts.

We’re so taken by Sugar that we head down to the fifth floor and grab an outside table at Quinto La Huella, the first outpost of Uruguay’s beachfront restaurant Parador La Huella.

Rumour has it that Swire has invested more than $1billion (£750 million) in this project — a tribute to capitalism — but you cannot come to Miami without calling in here.

Rooms at East (east-miami.com) from £180, including continental breakfast. Sugar is open till 1am on weekdays, 3am at weekends.