Ched Evans reveals he is still branded a ‘rapist’

Ched Evans says football fans still shout ‘rapist’ at him from the stands despite his conviction being overturned.

The Sheffield United striker, 27, served half of a five-year prison sentence after originally being found guilty of the offence in 2012.

But his conviction was quashed in 2016 following a retrial where the jury agreed sex in a Rhyl Premier Inn with the woman, who cannot be named, was consensual.

The striker, whose wife Natasha stood by him, says he is taunted by fans at most grounds, but is determined not to let it affect him.

Ched Evans, whose wife Natasha stood by him, says he is taunted by fans who call him a ‘rapist’ at most grounds, but is determined not to let it affect him

He told talkSPORT: ‘Not at every stadium do I get abuse, but at probably 70 per cent there will be fans shouting stuff – obviously at away games and away fans particularly’. 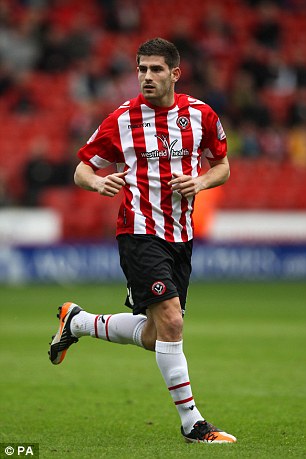 Evans, who plays for Sheffield United, says it is ‘not normal’ that so many people want to hurl abuse at him from the stands

‘The favourite one is, ‘you’re a rapist’, and this and that. Personally it doesn’t affect me whatsoever.

‘But when you go around the country and you’ve got people screaming and shouting those sort of words – that’s not normal.

It’s quite unbelievable to be honest – there’s nowhere else publicly you would go and shout such vile, horrible comments at somebody and potentially think it was funny or even acceptable.

‘But after five years of absolute abuse and scrutiny, I’m back where I belong and that’s playing football, so people screaming and shouting at me is nothing compared to playing football again.’

The footballer says he feels ‘no anger or bitterness’ about his time spent in prison after being accused of rape in 2011.

‘I’m not bitter,’ Evans told talkSPORT. ‘I didn’t believe anger or bitterness would help me in any way, so it’s just been a case of getting on with it and being happy for what I’ve got.

‘Football is a very short career and I’ve got the rest of my life to live after football, but to live with that anger and bitterness would be absolutely worthless.’

Evans was originally found guilty at Caernarfon Crown Court of raping a teenage woman at a Premier Inn during a night out in his home town of Rhyl.

Fellow footballer Clayton McDonald was cleared of rape at the original trial.

Evans was released from his contract with United soon after, but following his acquittal at a retrial at Cardiff Crown Court four years later he signed a contract with Chesterfield.

The former Wales striker rejoined the Blades last summer, but has been restricted to 13 appearances this season following ankle surgery

Evans still harbours ambitions of playing in the Premier League and returning to the Wales squad.

‘I’d love to be selected for the Wales squad again and I’d love to play in the Premier League,’ he added.

‘We’re just off the play-offs and we’ve got eight games left. It would be a dream to play in the Premier League with Sheffield United.’