A cheeky deaf boy got an audience with the Pope by climbing on stage and running up to the pontiff as his was about to start his address.

The youngster escaped from his mother and brazenly walked in front of Pope Francis during the address at Paul VI hall at the Vatican today.

Pope Francis was sitting down on stage when the child ran towards him, as his mother chased after him.

A monsignor was addressing the packed hall in German as the small boy casually wandered up the white marble steps towards the pontiff.

When he got to the top he paused, looked at the Pope who then burst out laughing, before the boy walked towards a guardsman.

Here I come: The boy casually walked up the steps of the stage while a monsignor addressed the crowd 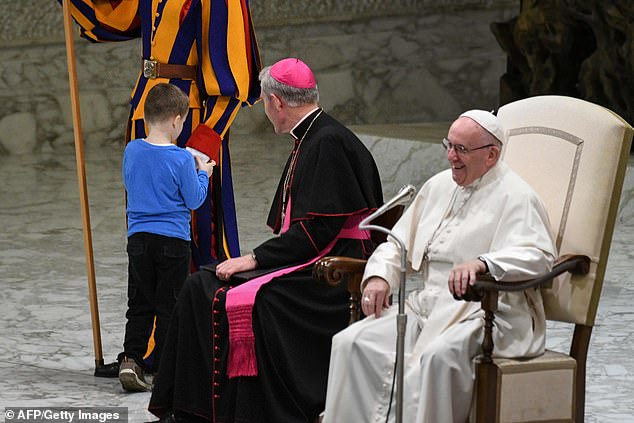 What’s this?: The youngster grabbed a guardsman’s hand as the Pope laughs at his antics 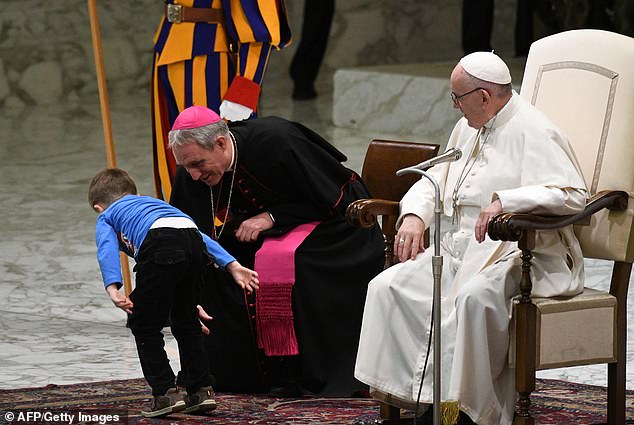 Pope Francis watched on as Prefect of the Papal Household, Archbishop Georg Ganswein, talked with the boy who jumped from the audience 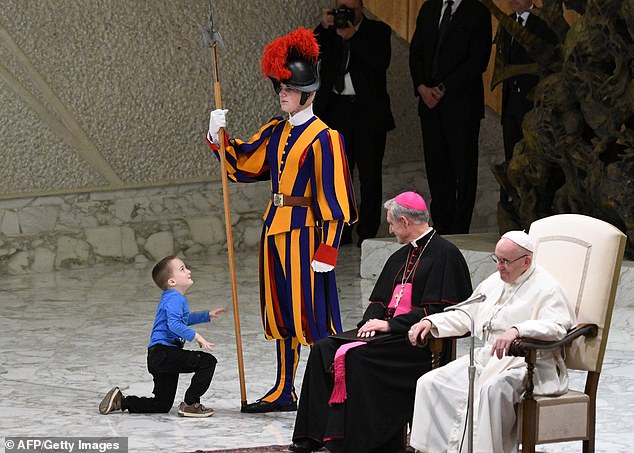 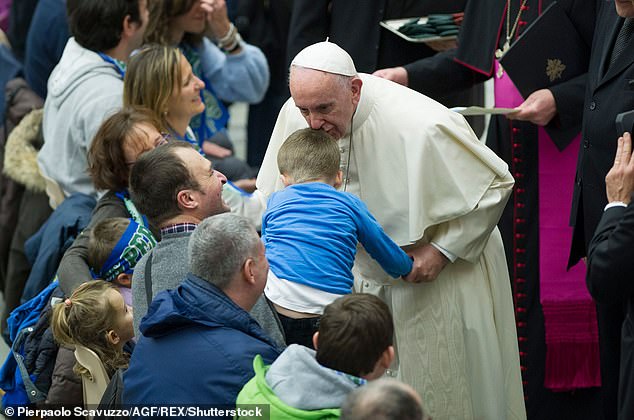 After going back into the crowd, Pope Francis kissed the autstic boy on the head after he climbed the stage

The crowds clapped as the youngster then ran off again.

The young boy, who has the same home country of Argentina as the Pope, broke free of his mother’s clutches to play with Pope Francis, much to the pontiff’s delight.

Swiss Guards and Vatican gendarmes stood by and gamely let the young boy run around Francis as monsignors read out his catechism lesson in various languages in the Vatican audience hall.

The boy ran around the guardsmen, tugged on a gloved hand, even gripping onto a lance at one point, then fiddled with his uniform and stood behind the Pope’s chair.

The boy’s antics drew smiles from Archbishop George Gaenswein, who was sitting next to Pope Francis.

‘Give me a kiss’, the pontiff said, as the boy’s mother rushed on stage to try and catch him, before Francis told her to let him be. 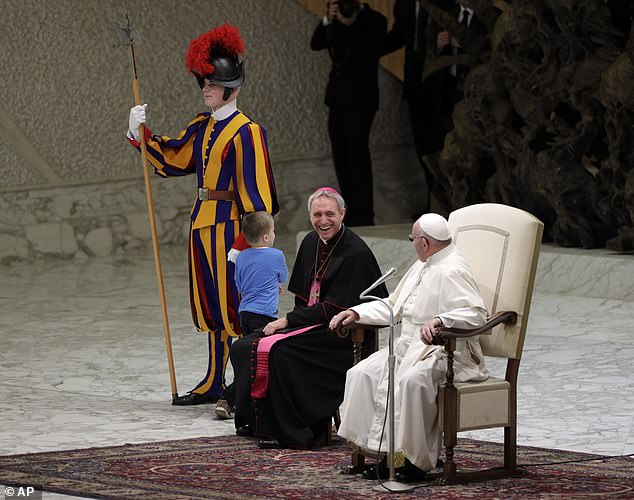 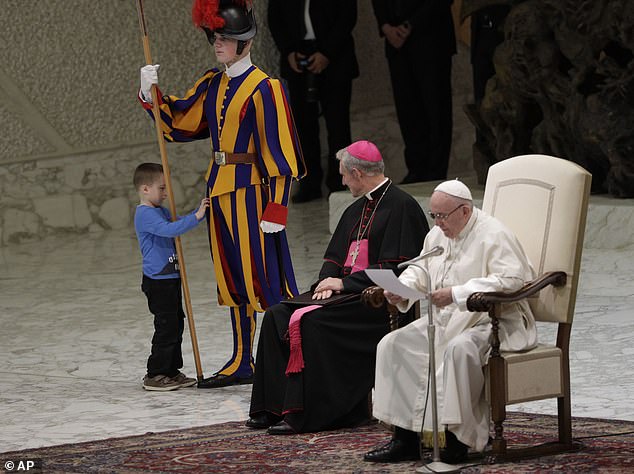 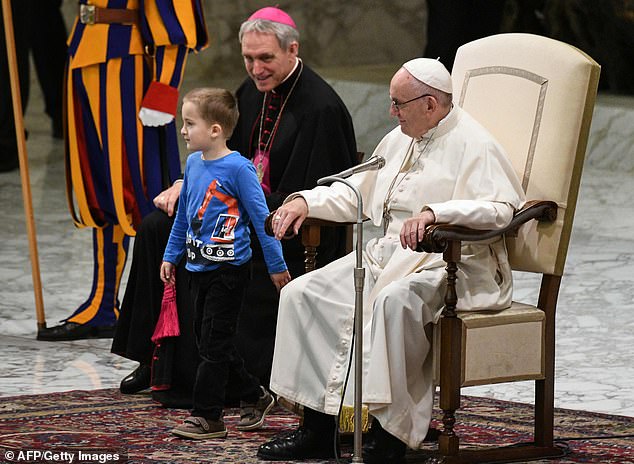 Cheeky: Pope Francis praised the boy’s freedom, telling the crowd, ‘Am I so free before God?’ 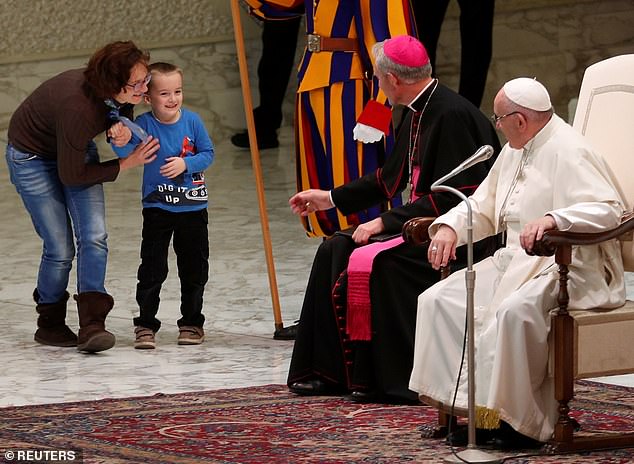 As the boy’s mother finally caught up with him, they were beckoned over by the pontiff so he could chat to them

‘We should all ask ourselves, am I as free in the face of God? We should all be as free before God as a child before his father.

‘Let us ask for the grace for this child to speak’, he said, as the 7,000 or so faithful present burst into applause.

The Prefect of the Pontifical Household, Georg Gaenswein, who was sitting next to the pope, turned to him and joked that the boy ‘is Argentinian, he’s unruly’.

As the monsignor continued his address the boy ran in circles behind the Pope and a security guard tried to get him to come to the side of the stage.

At one point he was joined by a little girl, who seemed reluctant to be there, as the pair played behind the Pope.

When Francis took the microphone, he explained in Spanish to the crowd that the child was hearing and speech impaired.

‘This boy cannot speak, he is mute’, Francis told those gathered for his weekly general audience, after the boy’s mother apologised and explained to the pope that her son was autistic, Italian media reported.

He added: ‘But he knows how to communicate, to express himself.’ 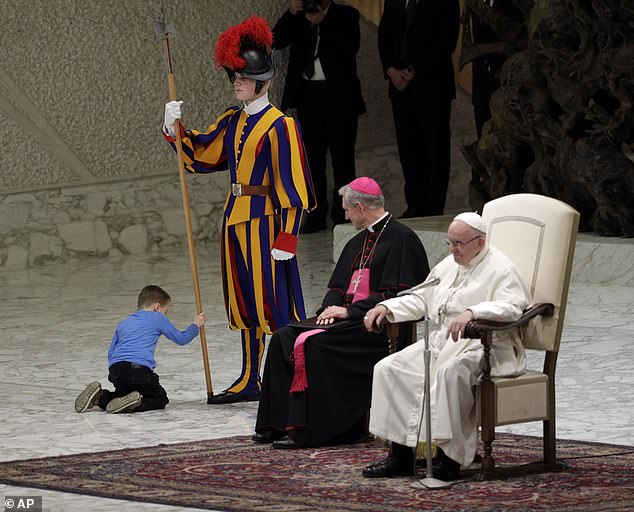 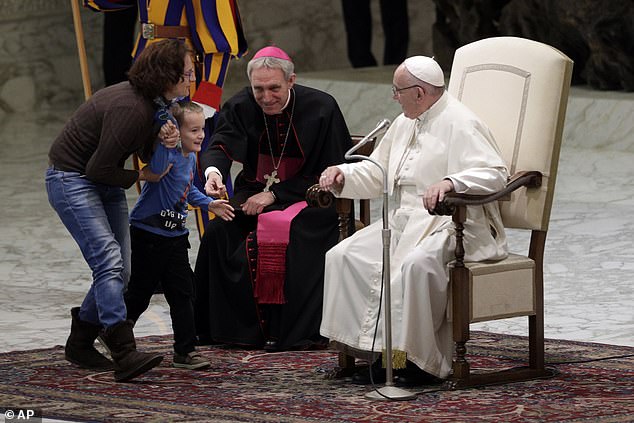 After a brief conversation, he was taken away after getting up to the area where Pope Francis was sitting 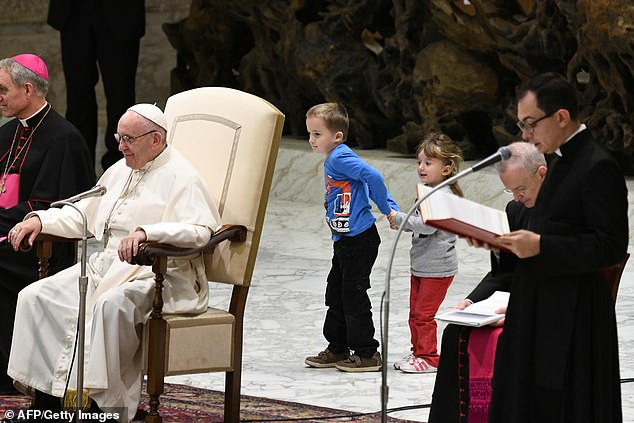 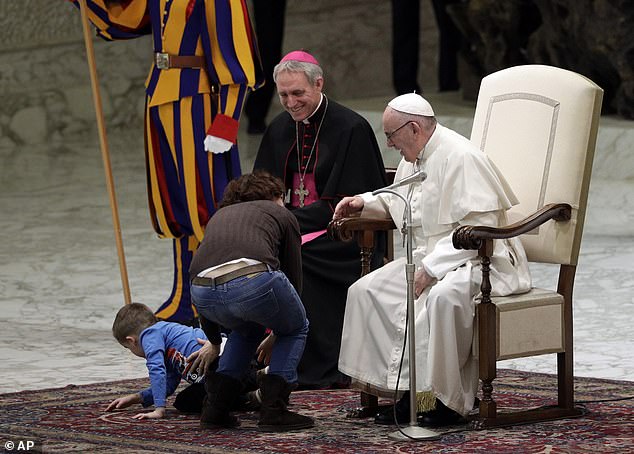 The boy ignored numerous attempts to get him to leave the stage, until he got to meet Pope Francis, who then addressed the crowd in Spanish

Pope Francis praised the freedom – albeit undisciplined – of the child as he climbed onto the stage without worrying about the formality of the occasion.

As the crowd applauded, Francis ended by praying for the boy.

The Pope’s weekly general audience is an address given by the Holy Father, usually in different languages.

It is not a mass but the Pope gives a themed speech, followed by prayers, a homily, and singing.

He also sometimes blesses babies that people from the crowd hold up for him.