‘Keep the Fosters in the fridge and Kylie Minogue off stage’: Cheeky teen writes letter to the Opera House claiming he’s WON the iconic building – and gets a brilliant response

A New Zealand man has uncovered a cheeky letter he wrote as a teenager to the general manager of the Sydney Opera House claiming he’d won the iconic landmark.

Rob Suisted, from Wellington, recalled his teenage antics by sharing a throwback of the dusty letter to Twitter earlier this week.

On June 12, 1989, a savvy Mr Suisted informed the general manager he ‘obtained ownership’ of the famous building after successfully winning a card game.

Rob Suisted, from Wellington, recalled his teenage antics by sharing a throwback of the dusty letter her wrote to the Sydney Opera House on Twitter earlier this week

According to Mr Suisted’s letter, ‘uncle Ron’ obtained the property from Kookaburra Jack ‘way back in 1894’ – despite the building’s construction taking place in the mid-1950s.

Mr Suisted then requested ‘Ownership Deeds’ be forwarded as the main auditorium would be used for upcoming ‘sheep trials’.

‘Your immediate attention in this matter would be appreciated, as formal action will be initiated forth with,’ the letter said.

‘P.s. Keep the Fosters in the fridge, and Kylie Minogue off stage.’

Ian Stephens, the then acting general manager of the Opera House, mailed a jovial reply to Mr Suisted 10 days later.

Mr Stephens thanked the teenager for his letter and admitted it was a ‘relief’ the landmark now had an owner. 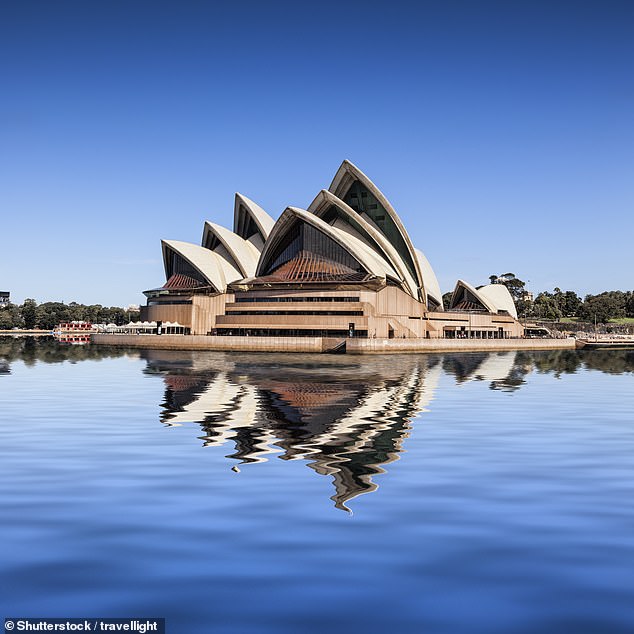 On June 12, 1989, a savvy Mr Suisted informed the general manager he had ‘obtained ownership’ of the famous building after successfully winning a card game

‘The Government now has access to an owner to whom it can pass the invoices for the $103,000,000 major maintenance,’ the letter said.

Mr Stephens wrote he did not believe the Opera House had held sheep trials in the past and confirmed there had been no convictions.

To sign off the letter, the acting general manager asked the teenager to provide stamps for the delivery.

‘If you can send us some wrapping paper, string and a sufficient quantity of postage stamps we will arrange for delivery to you at the earliest possible moment,’ the letter said. 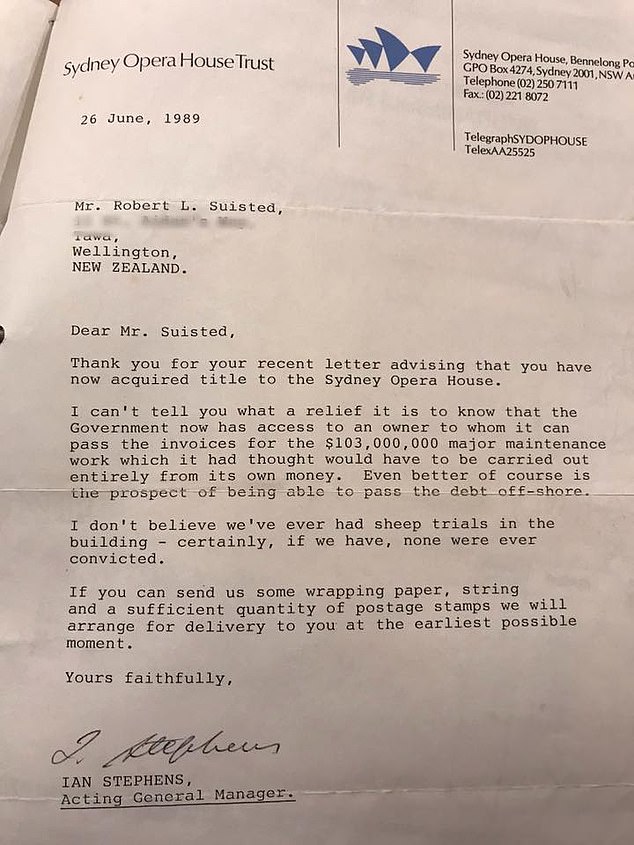 Ian Stephens, the then acting general manager of the Opera House, mailed a jovial reply to Mr Suisted 10 days later

Mr Suisted’s tweet about the letter garnered more than 1.6 thousand retweets and 7.5 likes.

The letters were described as ‘hilarious’, ‘brilliant’ and ‘awesome’ with many commending the response of the Opera House, who also joined the Twitter discussion.

‘Hi Rob – this offer still stands. Unfortunately, the cost of postage has increased dramatically since 1989. Are you still ok to cover this?’ Sydney Opera House wrote on Twitter.

‘We can organise some Fosters to be left in the fridge, however, we cannot agree to keep Kylie Minogue off the stage. It’s a package deal.’