Nathan Davies claims he was left with burns on his buttocks

A chef has been sacked from a Cotswolds spa after he allegedly ‘poured boiling butter down a colleague’s trousers.’

Nathan Davies claims he was left with burns on his buttocks following the incident at the Calcot & Spa in the Cotswolds.

Mr Davies, 22, a chef who has worked at the hotel for two years, shared pictures of his injuries on Instagram, where he warned fellow industry workers ‘not to take abuse.’

He alleged: ‘I’ve been working at Calcot Manor for two years and after ignoring the constant burning, punches (some causing black eyes) and being forced to eat items ranging from rabbit s*** to raw chicken, all for the pleasure of the executive head chef; jokes went a bit too far when I was scalded and hospitalised due to someone pouring boiling butter down my trousers.

‘Everyone should be careful working in kitchens and not take abuse or anything similar to what I’ve experienced in case it ends up like this.’

The 22-year-old claimed the incident had been carried out ‘for the pleasure of the executive head chef’, Richard Davies, who was a protégé of Gordon Ramsay.

Both Calcot & Spa and Richard Davies have strenuously denied his involvement. 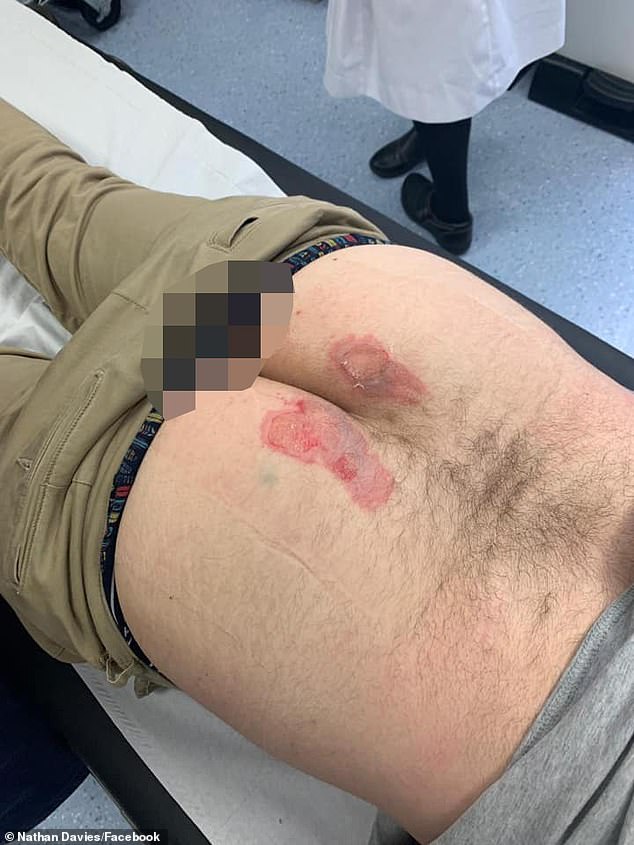 The young chef also claimed his wound became infected after he was ‘made to work’ despite his doctor ordering him not to – which the four-star hotel has also denied.

Chef Tom Kerridge began his career as a commis chef at the hotel, near Tetbury, Gloucestershire, before moving on to work in London with Gary Rhodes.

And Royal Zara Phillips also stayed there the night before her wedding to rugby player Mike Tindall.

On Facebook, Nathan Davies shared a screengrab from a Whatsapp chat where an unknown person appeared to apologise for the incident.

One message on June 6 read: ‘Hey Nath, just checking in to see how you are? I am so sorry for today, I hope you know I never intended to hurt you.

‘I honestly thought it would just drop out your trouser leg.

‘It’s unforgivable the severity and pain I’ve put you through, all for a crack and a laugh. Hope you get better mate.’

On June 28, another message said: ‘Why are you trying to get me sacked?’

Calcot & Spa said the person involved was disciplined and then dismissed. 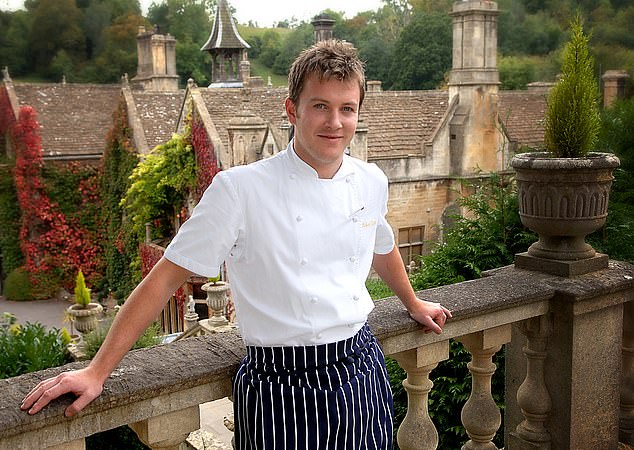 The 22-year-old claimed the incident had been carried out ‘for the pleasure of the executive head chef’, Richard Davies (pictured), who was a protégé of Gordon Ramsay. Both Calcot & Spa and Richard Davies have strenuously denied his involvement 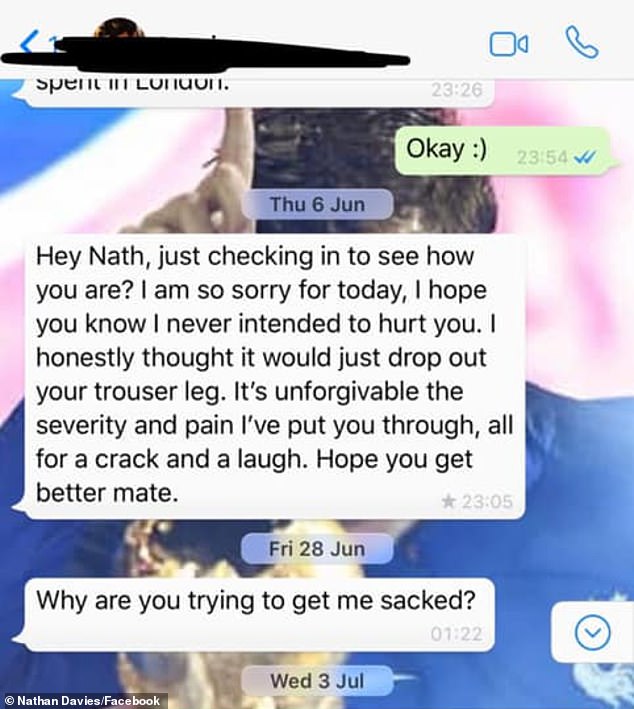 On Twitter, Richard Davies said he was ‘deeply sorry, embarrassed and mortified that this happened in one of my kitchens and what Nathan has had to mentally and physically endure as a result.’

He added: ‘I have never seen anything like this in my 25 years in the industry and was appalled by this horrific act and this is certainly not something that I or the rest of the team support, condone or represents how we run our business.

‘I of course share responsibility for this act, but was not at Calcot when it happened.

‘The chef responsible did not set foot back in the kitchen in his chef whites, I immediately suspended him, investigated the matter and he was subsequently dismissed.’

He continued: ‘I have always supported Nathan wholeheartedly, both personally and professionally, so I am really shocked and puzzled as to why he has taken this vindictive route against me, and I will co-operate in any ongoing investigations.’

He said that the Whatsapp messages posted by Nathan were from the chef that committed the act.

The Cotswolds hotel was named the Pride of Britain Hotel of the Year earlier this year for ‘delivering outstanding hospitality in all areas’. 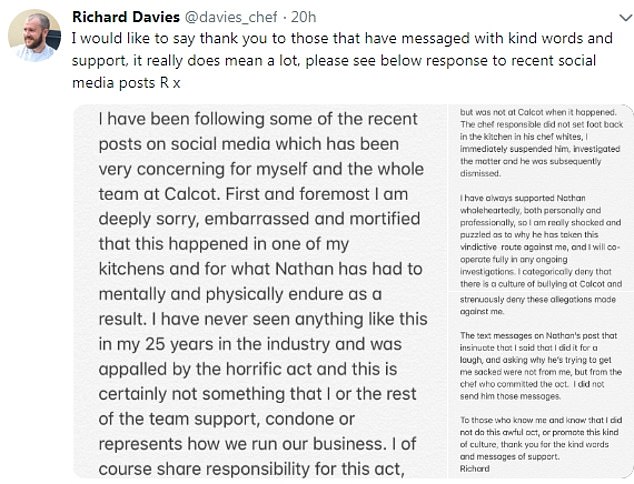 Calcot said in a post on Facebook: ‘We were as shocked as everyone else by the incident that has occurred to a member of our staff and appropriate action was taken without hesitation.

‘The member of staff responsible was immediately disciplined and dismissed at the time and he has not set foot in the kitchen since the incident several weeks ago.

‘Regarding all accusations of a wider culture of bullying in our kitchens, this is strenuously denied, and our ongoing investigations with the team lead us to believe that this is an isolated incident.

‘As yet, we have found no evidence of this wider culture, but our enquiries continue today and if we find anything that can be corroborated, we will act immediately as we have done so previously.

‘Executive Chef Richard Davies was not involved and was not in the kitchen when the incident took place, as alleged, but shares responsibility for this shocking situation occurring in his kitchen.

‘He strenuously denies all allegations and accusations made against him, which he says hold no truth.

‘With regard to the comments on timing of ‘immediate dismissal’, the person responsible was initially suspended, pending investigation, and then formally dismissed as soon as the allegations were corroborated.

‘We are exceptionally sorry about this incident and are fully committed to dealing with it properly and learning what lessons we need to.’