Cooking is a skill that requires years and years of practice to perfect, but some chefs and talented home cooks say there are certain ingredients that can instantly improve your meals.

They have shared their secret to immediately turning a dish from bland and boring to deliciously mouthwatering with just one key ingredient on question-and-answer website Quora.

Dozens of chefs and skilled amateur cooks revealed the ingredients they swear by, which vary from just a pinch of sugar or splash of vinegar to exotic items such as dried fenugreek and infused olive oils.

And they say that adding these special ingredients can be the difference between an average dish and one worthy of a Michelin star. 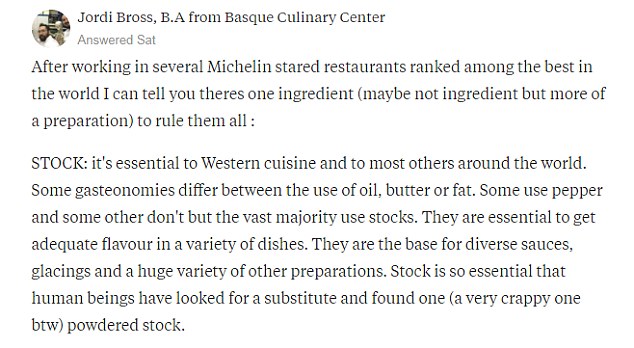 This chef says that the secret ingredient he swears by when cooking is homemade stock, which he says can be the difference between a bland meal and one worthy of a Michelin-starred restaurant 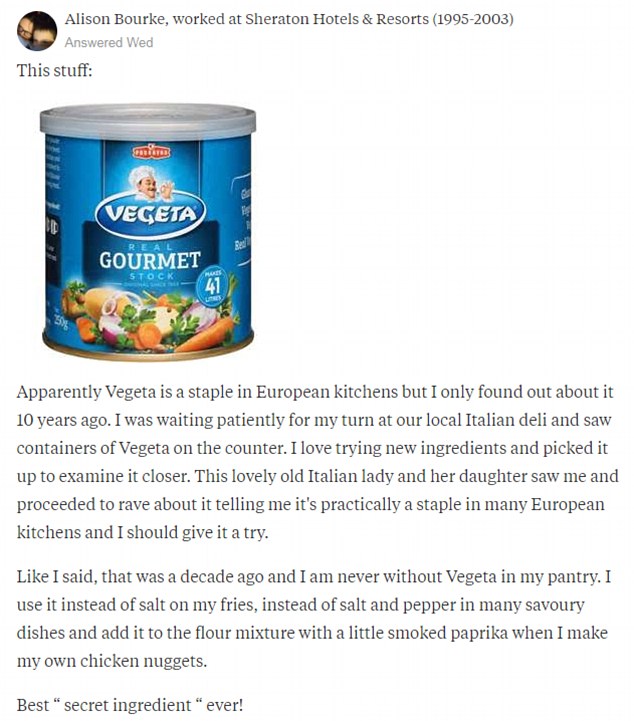 This home cook says that an Italian family once told her that most European kitchens have a pot of Vegeta gourmet stock powder in their kitchens as it’s a flavour-booster. She sprinkles it on fries, and adds it instead of salt and pepper to many savoury dishes

This experienced home cook reveals that often if a dish needs something extra, it often needs acidity instead of more salt so she swears by vinegar in her kitchen

This home cook says that ground fenugreek – a spice – can really lighten the flavour of any curry dish when combined with other spices. He also vouches for vinegar to add an extra dimension to sauces

This cook swears by paprika (sweet, not smoked) and adds it to almost every savoury dish, along with cayenne pepper if she wants a spicy kick to her food

Experienced home cook Darlene Southern says she adds Worcestershire sauce to most savoury dishes as she says it ‘lifts’ whatever recipe you add it to, and always gets compliments from friends when she adds it 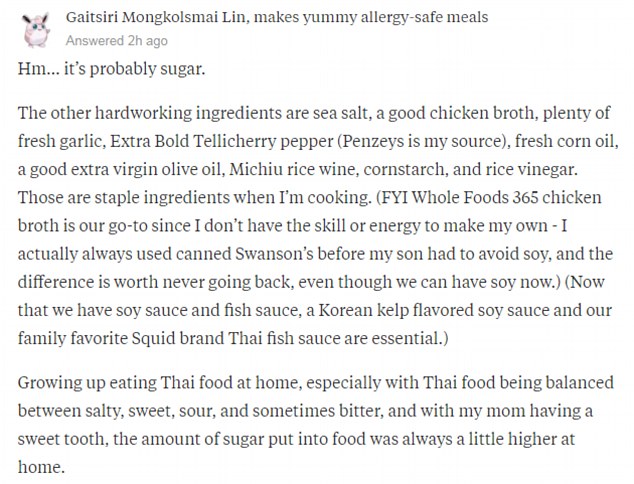 This home cook says that a pinch of sugar is the key to making delicious Thai cuisine, as well as being equipped with sea salt, chicken broth, garlic, pepper, corn oil and a good extra virgin olive oil

Another amateur cook says that he discovered a pre-made roasted onion base which replaces the gruelling process of caramelising onions for dishes such as onion soup, onion jam and gravy 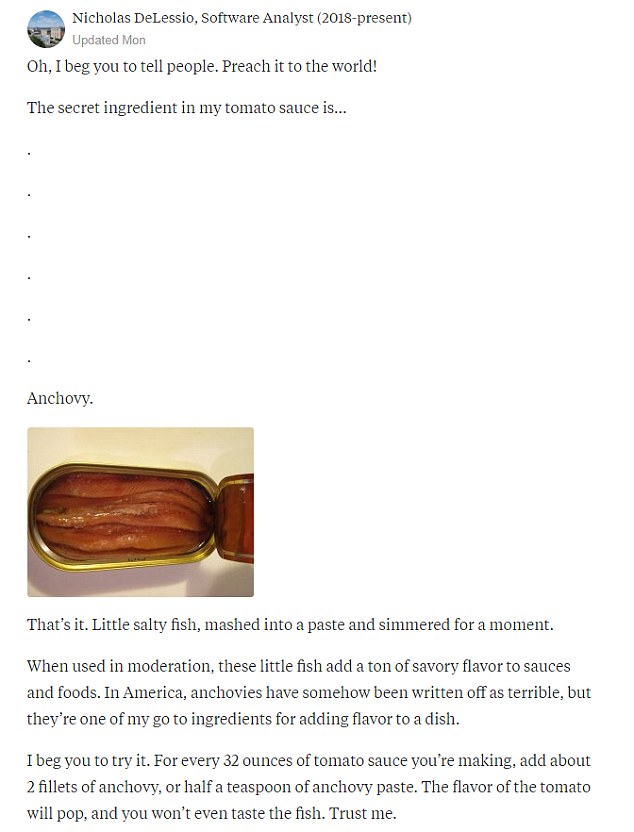 This cook’s secret to transforming the flavour of tomato sauces is to add a couple of anchovy fillets. He says you won’t be able to taste the fish, but it will make the ‘flavour of the tomato pop’ 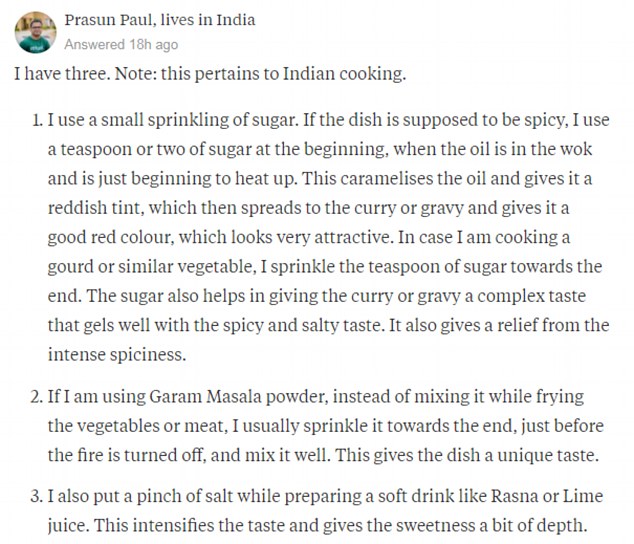 For Indian cooking, this experienced home cook says to add a small pinch of sugar, add garam masala powder towards the end of the process, and to add a pinch of salt to soft drinks such as rasna or lime juice 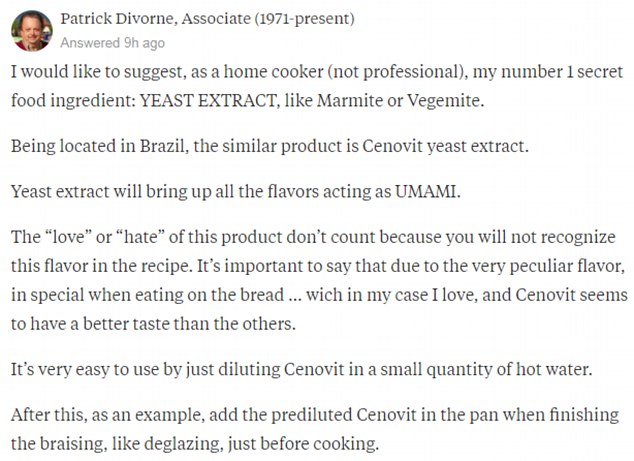 This home cook swears by adding a small amount of yeast extract – aka Marmite or Vegemite – to dishes. He uses it to deglaze pans and while braising meat, though he says it’s best to dilute it in hot water first

This home cook swears by using infused olive oils to dishes, which she says can transform the flavour of dishes such as scrambled eggs 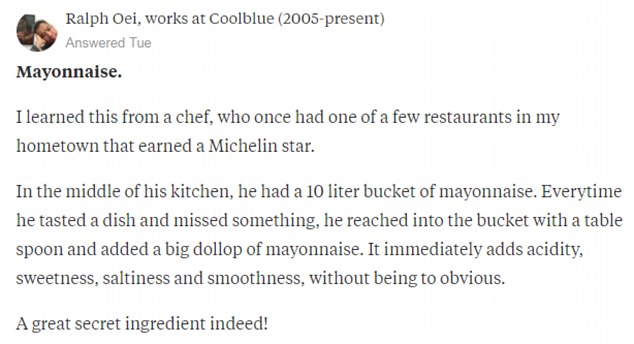 This home cook says they learned from a chef that when a dish is lacking in something, you should add a blob of mayonnaise as it adds a combination of sweetness, saltiness and smoothness to the meal